Without Anthony Mann as director, the Westerns James Stewart starred in dipped in quality. After the disappointing Night Passage, he didn’t do any at all until teaming up with John Ford in the 1960s, but unfortunately those were Ford’s weakest Westerns. After that there were some real dogs, junk like The Rare Breed and Bandolero! It was sad.

And for a moment, too, it looked as though Anthony Mann’s Westerns without Stewart would also take a nose-dive. The director’s first one after The Man from Laramie was The Last Frontier, and, quite honestly, it wasn’t a patch on Laramie or The Naked Spur or Winchester ’73.

Unlike Stewart, though, Anthony Mann would recover some Western glory in the last part of the decade, before moving on to other genres.

The Last Frontier’s title was as classically ‘Western’ as The Man from Laramie. There are probably just as many oaters bearing the title The Last… something or other as there are ones about The Man from… somewhere or other. And immediately The Last Frontier conjures up the Frederick Jackson Turner orthodoxy of the closing of the frontier and the end of the ‘West’. 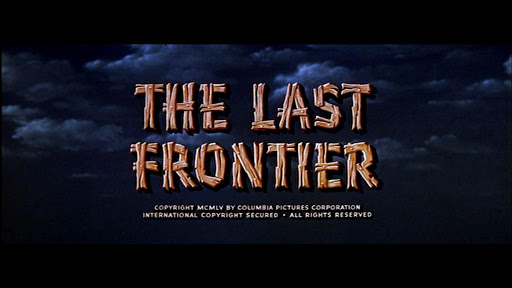 Mann was famously interested in landscape and the visual composition of his pictures. Even the titles reflect that and it may not be too fanciful to suggest that just as The Far Country set the tale of a hard and cold man in the frozen north of the title and Bend of the River described a turning point in the life of a man putting behind his past in a distant land, so The Last Frontier told of a free frontier spirit finally being tamed by ‘civilization’. The very first shot shows an idyllic (i.e. wild) scene of trees, sky and mountains, then the camera drops to show a stolid little fort – paradise has been invaded. This is really the message.

Indeed, this picture does treat the theme of civilization encroaching on freedom, and the old times when a man could be a man dying, killed off by towns and churches and schools and temperance societies. This, as you know, was one the standard ideas of the Western novel and film, and had been since the beginning. See our essay The End of the West.

In the Mann/Stewart Westerns we had had a driven, almost manic loner utterly determined to fulfill a mission, with scant regard for communities or even close relationships. In The Last Frontier this idea was stood on its head. It’s all about a free spirit, a frontiersman of the old school, who is desperate to be integrated into ‘society’, a man who really wants to belong and who needs relationships, both platonic and romantic.

With no Stewart, the lead role went to Victor Mature. Matinee idol/sword-and-and-sandal specialist Mature might have been thought an odd choice for a Western, but in fact he had done brilliantly as Doc Holliday to Henry Fonda’s Wyatt Earp in John Ford’s My Darling Clementine in 1946, and had also been good in the lead of a ‘lesser’ Western, perhaps, but still a nice one, Fury at Furnace Creek in 1948. It is said that Last Frontier producer William Fadiman and Mann wanted Brando for the role, and Mann wasn’t too happy about getting Mature. He was particularly critical of Mature’s poor horsemanship.

It’s a Civil War story, in the sense that it set during the war, but out West in a wild outpost on the Wyoming/Montana border. The plot has the traditional cavalry Western element of a stupid by-the-book Army colonel (Robert Preston) and a level-headed more understanding captain (Guy Madison, doing the occasional big-screen oater between seasons of the TV Adventures of Wild Bill Hickok) who finally prevails. This was a tried-and-tested plotline, and John Ford had done it better. Strangely perhaps, Mann and writer Philip Yordan were scathing about cavalry Westerns as a genre – until they made one.

Three footloose mountain man/trappers (Mature, James Whitmore and Pat Hogan) have been deprived by the Sioux of Red Cloud (Manuel Dondé) of their whole year’s worth of furs because the Sioux are angry at army forts being built on their lands, and the trio go to Fort Shallan (one supposes a version of Fort Phil Kearny) to get compensation.

Captain Madison is sympathetic and persuades them to enlist as scouts. Naturally, the trapper-scout hero Jed Cooper (Mature) falls for the colonel’s wife (Anne Bancroft) in the absence of the colonel, to provide love interest. She is at first stand-offish but gradually warms to the wild man, a child of nature.

This essential theme of ‘civilizing’ of the wild man has interest. It applies more to the white man Jed than to the Indians under Red Cloud. Jed is tamed and domesticated, which definitely arouses mixed emotions in us, the audience.

Though seduced by the fine uniform, Jed is undisciplined and drunk, and hated by Sergeant Decker (Peter Whitney). There is an epic and typically Mann fight between the two, much of it on the roof, shot from below.

The uniform is key, in fact. Jed yearns for it, and it symbolizes his acceptance into ‘civilized’ society. Bancroft tells her husband, “I married a man, not a uniform.” Preston replies, “I am not a man without this.” Later, the blue jacket is taken from Cooper. “You’re not fit to wear a uniform and you never will be,” says Madison. It is a crisis point for the wild man.

In one telling scene the colonel falls into a bear pit and is stuck in the enclosed, dark and confined space while Cooper stands tall and free against the sky, mocking him. But it doesn’t last: the free spirit is soon to be confined too. Actually, Jed is quite bearlike. At one point he says of Bancroft, “She looks at me as if I were a bear,” and his pal Gus replies, “There’s some comfort in bein’ a bear in bear country.”

There is, as expected, a climactic battle with the Indians, Jed heroically saves the day and the colonel is conveniently killed. Interestingly, when the Indians look like carrying the fight, Whitmore’s character shouts, “Back to the trees!” but Jed cries out, “Back to the fort!”

The screenplay was co-written by Yordan again, who would work seven times with Mann, twice on Westerns (this and Laramie). Yordan and Russell S Hughes (who would do the screenplay of the very good Jubal the following year) adapted it from the 1947 novel The Gilded Rooster by Richard Emery Roberts. I haven’t read the source novel so can’t say if it’s good but the movie script from it does leave quite a lot to be desired, though there a few good moments. Let’s just say it doesn’t score highly on originality.

Quoted by Erick Maurel (in French, so I have translated it back: the words may not therefore be exactly what he said) Yordan commented, Frankly, I believe we didn’t succeed with The Last Frontier. People didn’t understand it, so we didn’t explain well. Yet the concept that acted as the starting point, this vision of civilization by a savage, was fine. In my opinion, it was one of the best subjects for a Western – this trapper who only sees civilization through a uniform, who imagines that civilization is a wife and a uniform, yet he obviously isn’t made for either. He was supposed to die at the end but Columbia imposed a stupid happy ending.

As Yordan said, the upbeat ending jars. Mature looks sentimentally on the American flag as he is confirmed in his blue coat and sergeant’s stripes and Bancroft waits meekly for him. Mann hated it. It goes against all the dark pessimism of the rest of the movie, and verges on the cheesy.

The other two free spirits, Gus and Mungo, have more fitting exits. Gus perishes in the fight and Mungo returns to the wilderness.

Robert Preston was always strong in Westerns, though probably better at the charming rogue part, and he does a good job with this (albeit over-drawn) role of martinet officer trying to live down a past (because of losses of men under his command, he is known as the Butcher of Shiloh).

His counterpart, the captain, though, is Guy Madison, and while in this film he is perhaps a bit gutsier than usual, he always verged on the wishy-washy, I thought. He was certainly nothing like John Wayne’s Captain York in Fort Apache – though of course his part was not so central; he’s not the hero.

La Bancroft was a fine actress, and she did five Westerns, but would probably have wanted quietly to forget this one.

The best actor on the set after Mature was probably James Whitmore, fulfilling the typical Mann old-man role (there seemed to be one in every picture). He is the cranky old trapper Gus, full of gloomy prognostications about the end of the West. Amusingly, this father-figure was actually eight years younger than the ‘young’ fellow he was supposed to mentor.

The picture was shot in CinemaScope and in Technicolor, as Laramie had been, of which Mann had quickly shown himself to be a master. The DP was the talented William Mellor, who had shot The Naked Spur. Popocatécatl Volcano, Puebla, Mexico locations stood in for Wyoming/ Montana. Yet there was none of the brightly-colored exterior shooting we got in Laramie, none of that limpid New Mexico light. There are a great many night scenes and the fort, where much of the action takes place, is a dark and gloomy place. The whole aspect of the picture is somber and lugubrious.

The New York Times slammed the film on its release (in December 1955, six months after Laramie and seven months before the picture Mann was to have directed, Night Passage). Film critic Bosley Crowther said, “Frankly, we don’t think anybody gets a decent deal, including the innocent people who pay to see this Cinema-Scope film. The story is so disordered and the color photography is so deliberately dim that the whole thing is thoroughly obscurist.”

The picture made $1m at the box-office, which probably meant a loss for Columbia.

Today, opinion is divided as to the quality of The Last Frontier: some critics have been complimentary about Mature’s acting – Dennis Schwartz, for example, says, “I found this to be his best film performance ever” – and others have praised the film’s quirkiness, but Brian Garfield wrote that the movie was “trashy big-budget junk”.

Paul Simpson on The Rough Guide to Westerns thinks that The Last Frontier was “almost as fascinating as the Cooper/Stewart films” and said that while the picture “was marred by knockabout comedy and a ludicrous happy ending”, it nevertheless made “fine use of Victor Mature and Anne Bancroft as it questions the ‘civilizing’ of the West.”

Well, you pays your money and you takes your choice.

The picture is known by various titles. Rotten Tomatoes has it under Savage Wilderness, the name it got on TV release, and it also sometimes gets called The Gilded Rooster, after the title of the source book. Mostly, though, it’s The Last Frontier. Germans called it Draußen wartet der Tod (Death Waits Outside), the Dutch De redder van Fort Shallan (The Savior of Fort Shallan), the Spanish, rather oddly, Desierto Salvaje (Savage Desert), while the French used the traditional La charge des tuniques bleues – a title Erick Maurel calls “son titre français, très mal approprié une fois encore“.

For me, The Last Frontier has many strong points (it’s certainly not “trashy big-budget junk”), but it never really ‘gels’ and it remains, with Cimarron, the least satisfactory of Mann’s Westerns. Fortunately, the next one would be very good indeed, back to Mann in top form. But more of that anon.