Billy the Kid in fact and fiction 9

The Kid is taken

In the election of November 1880, sitting Sheriff George Kimball received 170 votes but his challenger, Pat Garrett, got 300. Acknowledging the decision, Kimball immediately appointed Garrett his deputy until the transfer of authority in January, and more to the point, New Mexico US Marshal John Sherman made Garrett a deputy US marshal. With the two appointments, Pat was the law in the land straight away.

Immediately Garrett led a posse of fifty men which was to join up with Frank Stewart and the Panhandle stock association riders and make a sweep of the outlaw haunts. There were delays, caused by snowstorms and an outbreak of distemper which immobilized many horses, but finally at the end of November the posse set out from Roswell. They moved along the Pecos to Bosque Grande and there found two wanted men, JJ Webb and George Davis, escaped from Las Vegas jail, whom they arrested, but not Bonney or other rustlers. The reunion with Stewart’s men didn’t happen. At Fort Sumner they did not net the fugitives either. The ‘grand sweep’ had fizzled.

Bonney and his cohorts were dividing their time between Fort Sumner, local ranches and sheep camps, but among some of the Anglo community their welcome was beginning to wear thin. On December 12 Billy wrote again to Governor Wallace, a disingenuous letter proclaiming his innocence of all wrongdoing, but it was too late for that. Garrett, his deputy US marshal status allowing him to operate outside Lincoln County, finally met up with Frank Stewart, and together they launched a new search. They reached Sumner before daybreak on a snowy December 18. Billy wasn’t there but he was somewhere near, Garrett knew. The new sheriff obliged a Bonney ally to carry a note to the outlaw saying that Garrett had given up and pulled out for Roswell. The trick worked. On the night of the nineteenth the Bonney party approached Sumner, O’Folliard in the front, followed by Pickett. In the resulting gunfire Tom O’Folliard was hit in the chest. He is said in some sources to have muttered, “God damn you Garrett, I hope to meet you in hell” and Pat replied, “I would not talk that way, Tom. You are going to die in a few minutes.” He did.

The four remaining outlaws, Bonney, Pickett, Wilson and Rudabaugh, fled into the snowy night. Joined by Charley Bowdre, they holed up in a shepherd’s rock house (not a wooden cabin as usually shown in movies) and that was where Garrett and his posse came up to them. When Bowdre went outside to feed the horses, he was riddled by rifle fire. He fell back into the house. “They have murdered you, Charley,” Garrett heard the Kid say, “but you can get revenge. Kill some of the sons of bitches before you die.” And with that the Kid shoved Bowdre outside again. He staggered to Garrett, said, “I wish… I wish…” and died.

The posse was well supplied and the men lit a big fire and cooked up a meal. Inside the rock house the outlaws were cold and hungry. At about 4 pm a grubby white flag was waved from the hut. The outlaws came out with their hands up. At Fort Sumner on Christmas Eve, Billy still prattling cheerfully, the prisoners were put in irons. Billy was allowed to say farewell to Paulita Maxwell. A wailing Manuela Bowdre, mad with grief, railed at Bonney in the plaza. Garrett paid for Charley’s funeral and a new suit for him to be buried in. On December 26, Pat Garrett brought Billy and his compadres into the county seat of Las Vegas and lodged them in the jail there.

Billy reveled in his celebrity, happily chatting with reporters and playing to the crowd. Wilson and Pickett were glum and Rudabaugh afraid – he had killed a deputy in that very jail. Garrett and his men stood guard outside. There would be no lynching (a pastime of which Las Vegasites were rather fond). The next day hacks took the prisoners to the railroad station and in the teeth of a furious mob they were boarded onto a train for Santa Fe.

There, the outlaws tried to dig their way out of the jail but an informer put in with them revealed the plan and they were thwarted. Billy wrote repeatedly to Governor Wallace but received no reply. The trial approached and the judge was none other than the hostile and formerly pro-House Warren Bristol. The principal charge was the murder of Sheriff Brady. On April 13, 1881 Billy Bonney was found guilty. Of the fifty-odd men indicted for crimes in the Lincoln County War, he was the only one to pay any penalty. He was sentenced to death. He was to be hanged in Lincoln on May 13.

If you visit Lincoln today you’ll find a real atmosphere. It’s quite unlike other ‘Wild West’ tourist flytraps such as Tombstone. You can see where Bonney was imprisoned and the bullet-hole in the wall supposedly left by him as he made his dramatic escape, shooting Deputy Jim Bell on the stairs and then cutting down the vicious bully Bob Olinger with his own shotgun. 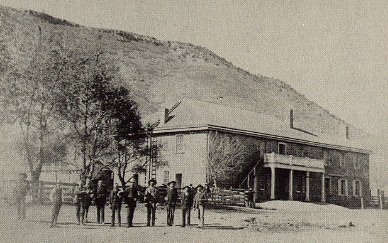 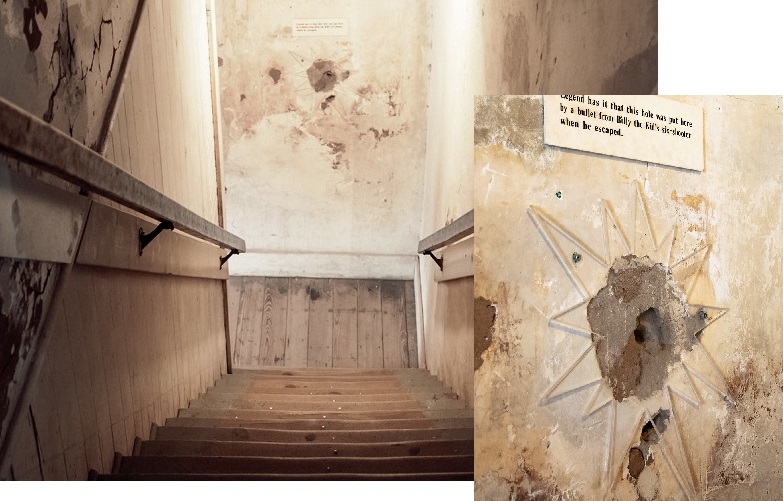 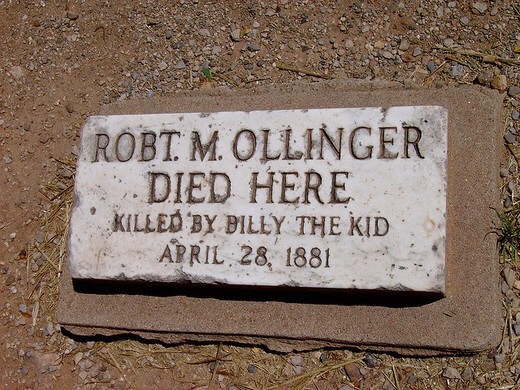 In fact three of the four guards Billy had while held there, all of whom seriously underestimated him, were at least equally worthy of punishment as he was, if not more so. William Mathews and Bob Olinger were Dolanites: Mathews had led the gunmen that murdered Tunstall and Olinger was a leading member of Peppin’s posse. As for John Kinney, he was the closest confederate of Jesse Evans, a thief and a killer. That these men were deputies at all was frankly a disgrace. But there it was.

The news shocked the whole territory. It seemed that the sensational build-up he had received in the press, which elevated Billy into the West’s premier outlaw, might actually be justified. Now the press really went to town. The Las Vegas Optic branded him a “demon”, “malignant and cruel”, “urged by a spirit as hideous as hell” as well as a “flagrant violator of every law” and a “murderer from infancy.”

Of course, as we know, Billy had escaped hanging, but not execution.

Billy’s friends, and he still had many, especially among the Hispanic community, urged him to go to Mexico, and indeed that would have been a logical step. But Fort Sumner seemed to exercise a magnetic pull. He arrived there on May 7, nine days after his escape from Lincoln. He resumed his old life there, sleeping in different camps, having trysts with señoritas. Everyone seemed to know. Even the Las Vegas Optic reported on May 19, “He is not far from Ft. Sumner and has not left that neighborhood.” 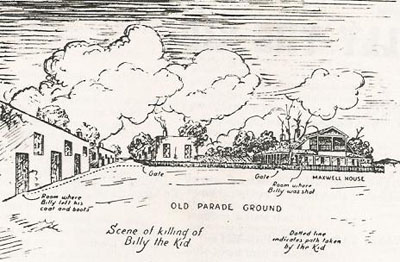 Garrett received the invaluable help of John W Poe, who has often been overlooked in the story, at least in the movies. Poe was, like Garrett, an ex-buffalo hunter and he had been a highly competent law officer in the Panhandle. He succeeded Frank Stewart as the cattleman’s stock detective and became determined to track Bonney down. Teaming up with Garrett, and with a small posse, he arrived at Fort Sumner on July 14.

We all know the outcome very well – how Garrett went into Maxwell’s bedroom to ask him if he knew where Billy was, how at the same moment Billy arrived to cut a slab of meat, the Quien es? repeated, how, as Garrett later wrote, “I jerked my gun and fired.” The sobbing Celsa Gutierrez, the body of the boy laid out. 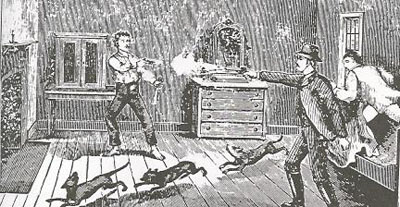 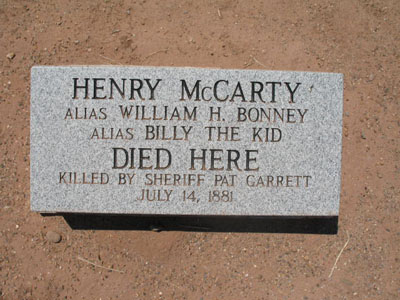 The next day a coroner’s jury concluded that it was justifiable homicide. Billy the Kid was buried the next day, next to his pals Tom O’Folliard and Charley Bowdre. 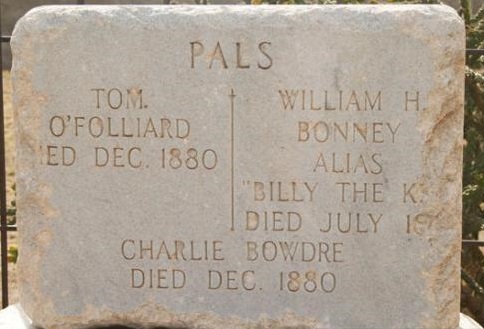 Well, that concludes our life and death of Billy the Kid.

We’ll move on now to looking at the legend, and in particular how Hollywood made him a star. Until then, hasta la vista!