Sadie tells it from her side

After all the adulation of the 1950s, when Wyatt Earp was the screen Western lawman nonpareil, brave, courageous and bold, as the song had it, and then the reaction of the 60s and 70s, when Wyatt Earp was a nasty killer and a crook, the 80s were relatively Earpless. Maybe people were all Earped out. Of course there weren’t many Westerns at all in the early 80s, with or without an Earp. Heaven’s Gate had done its best to sink the genre of the big-screen oater, when it sank the studio that made it, and for the first half of the 1980s there was no proper A-Western at all. People said the genre was finished. Of course it wasn’t, and Clint Eastwood and the Kasdans, bless them, came back in ’85 with Pale Rider and Silverado, both splendid. And even before then there were B-movie and TV-movie Westerns.

One such came out in 1983 when NBC screened I Married Wyatt Earp.

In 1976 an apparently scholarly book had come out bearing the title I Married Wyatt Earp: The Recollections of Josephine Sarah Marcus Earp, Collected and Edited by Glenn G Boyer (University of Arizona Press). It did really well; in fact it is said to be the second-highest selling book on Wyatt Earp ever. It was cited in academic works and used in schools. 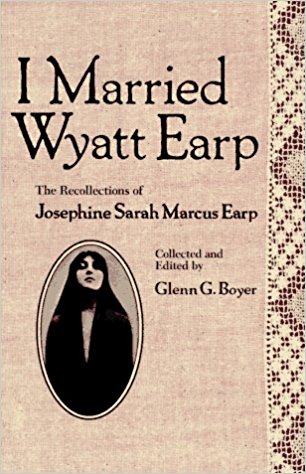 Boyer claimed that he knew members of the Earp family well and that he used two manuscripts written by Josephine Earp as the basis for the memoir. The first was an account, allegedly composed by Wyatt’s widow with the help of former Tombstone Mayor and Tombstone Epitaph publisher John Clum, known as the Clum manuscript; the second, supposedly written by Josephine with the assistance of two Earp cousins, the Casons, was known as the Cason manuscript.

TV director Michael O’Herlihy, brother of actor Dan, who worked on episodes of Gunsmoke, Maverick, Rawhide, and so on, and who also helmed the Disney contemporary ‘Western’ Smith!, directed a movie version, shot around Old Tucson in 1981, but not screened until January ’83. The screenplay was by IC Rapoport.

It was an Osmond Productions picture and as a consequence suffered from the fairly disastrous casting of Marie Osmond (Donnie’s sister) as Josie (avoiding the name of Sadie that she had used in Tombstone and which the real Josephine later disliked). 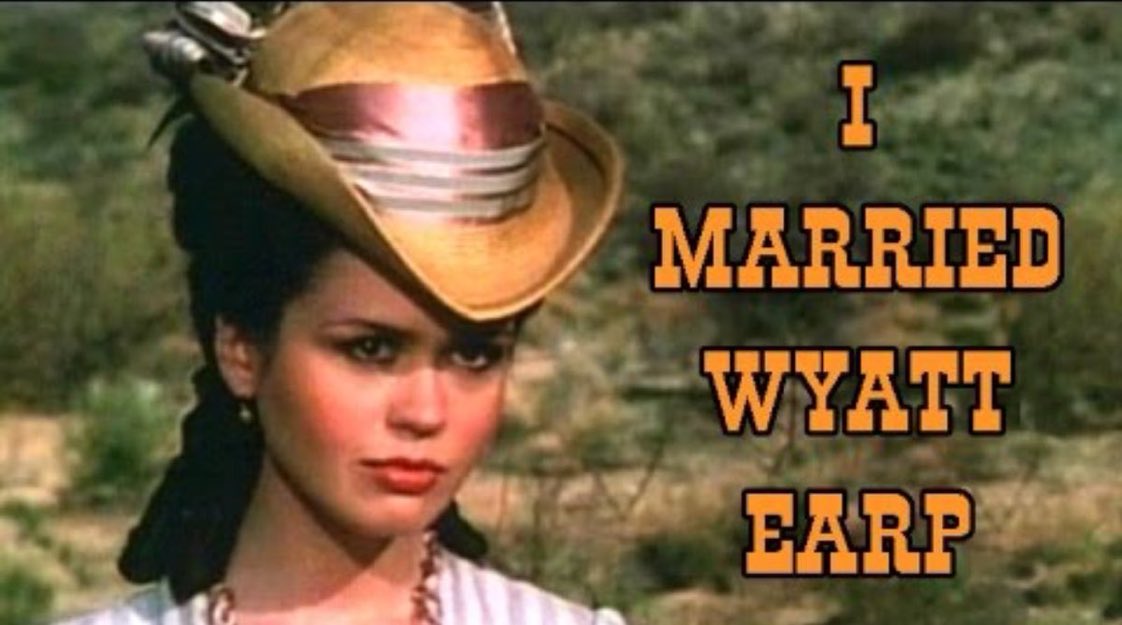 Bruce Boxleitner (from Tron) was Wyatt. At least Mr Boxleitner did look a bit like the real Wyatt of the Tombstone days, mustached, fair-haired, and in his early thirties.

Virgil also (Ron Manning) is pudgy-faced as the photographs show him (I always thought Slim Pickens would have been a good Virgil). Boxleitner is a less charismatic actor than previous Earps but like Ms Osmond, he has a go. Other parts were taken by Jeffrey DeMunn (Doc Holliday), Josef Rainer (Morgan Earp) and Charles Benton (Ike Clanton).

Now, I Married Wyatt Earp is a made-for-TV movie, with all that that implies – too many mini-climaxes of the action followed by fades-to-black, for one thing. Ms Osmond was a very amateur actress and not even a good singer – at least, she may have been good at 1970s pop songs, I wouldn’t know, but she certainly couldn’t handle Gilbert & Sullivan or other Victorian music in the movie. Still, she has a brave stab at it.

Sadie/Josie introduces the story in 1942, sitting before Wyatt’s tombstone in Los Angeles (he died in 1929) and tells us that so many false stories have been told about Wyatt (which was indeed the case) that she will now reveal (cue for flashback) the truth. But either her memory was seriously faulty – and we could forgive an elderly lady that – or she was plain untruthful, which I fear is the more likely. For the heavily (and perhaps understandably) partial account she proceeds to give is almost as much historical hokum as all the other cinematic versions and it contains misrepresentations of the facts (aka lies) in abundance.

Some of the real occurrences are recounted and at least we get a Tombstone story with Sadie/Josie in it – she had pretty well been written out of earlier versions, partly because she insisted that there be no mention of Wyatt’s desertion of his common-law wife Mattie, a laudanum-addicted ex-prostitute, or of the fact that she, Josie, had been first the lover of County Sheriff John Behan. Certainly compared with the likes of Frontier Marshal (1939) or John Ford’s My Darling Clementine, I Married Wyatt Earp is a veritable paragon of truthfulness.

Events are telescoped (you have to in a 100-minute film) and key characters are omitted – there is no John Ringo, for example, or Curly Bill or Indian Charlie. And the ending is patently false – a complete fabrication – though whether this was Mrs Earp’s faulty recollection, Mr Boyer’s belief or the TV company’s commercial happy-ending preference is not made clear.

Of course straight away Wyatt is introduced as “Marshal Earp” and clearly shown as the marshal of Tombstone. As we all know, brother Virgil was marshal of Tombstone for a time but Wyatt never. In fact, though for a short period a deputy US marshal, Wyatt was never marshal of anywhere, not even Dodge, only a constable, assistant or deputy. But as in all Wyatt Earp pictures, he gives the orders, bossing Virgil and Morgan around. Sadie and Stuart Lake preferred him as principal.

The traveling theater company approaches Tombstone (nice saguaro scenery) with five singing girls (one of them Marie) in a stage followed by a hack and a wagon. Of course they are held up, i.e. the famous robbery in which Bud Philpot is killed happens to them. Right. Earl W Smith, playing unshaven Frank Stilwell (Stillwell in the movie credits) tries to kiss Sadie and steals her ruby rings. The other girls panic but Sadie is cool and brave, natch. The Earps arrive in a posse, stay just long enough for a spark between Wyatt and Sadie, then depart in pursuit of the bandits. The girls arrive in Tombstone and immediately smarmy Sheriff Behan makes eyes at Sadie. But she rebuffs him.

In reality, as I have said, Sadie rapidly became the kept woman of Behan. She always denied this, or glossed over it anyway. In I Married Wyatt Earp, she realizes right away that he is a deceitful cad.

Wyatt does not at first court her, however, for he is married. He is decent and long-suffering towards his wife Mattie, who, he tells Sadie, is “drunk, sick and dying” (no mention of drug addiction). Mattie (Dee Maaske) is shown, bed-ridden and haggard, refusing Wyatt a divorce. In actual fact, Mattie was never married to Wyatt so a divorce was somewhat supernumerary. When Wyatt and Sadie fall in love in the film, Mattie very conveniently dies. She did not, of course. Wyatt left her for Sadie and she returned to prostitution, and died of an overdose of laudanum and alcohol in 1888. All this history was too unsavory for Sadie (and maybe for 80s mainstream TV viewers) and is quietly changed.

The Earps, and Wyatt in particular, are of course the good guys. This is understandable; it’s marketed as a Sadie/Josie-based account and is bound to be partial. Wyatt is tall, tough, polite, and honest. He is shown as part-owner of the Oriental saloon (in fact he had a quarter interest in the faro concession) but there is nothing disreputable about it. He engages Sadie as a singer there and of course she entrances the crowd (despite her shouty 70s-pop voice).

The Clantons are out-and-out baddies, cruel louts who drink and deserve what they get. They take guns from the hardware store (without paying!) and tell Sadie, who is in the store because she is staying with respectable owner Jacob Spiegler (Ross Martin) and his wife, that they will be waiting for the Earps at the OK Corral. So it is Sadie who carries the message. 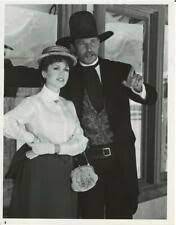 Then we get the classic and inevitable walk-down of the three Earps and Doc Holliday. But we also get brave Sadie with a Winchester in Fly’s photographic parlor covering unnamed Clantonites so that they cannot shoot the Earps from the window. Well, it could have happened, I suppose. Oh look, there goes a flying pig.

The gunfight is quite well staged, short and loud. After it there is no hearing or inquest. We move to Christmas when Wyatt gives Sadie a volume of Elizabeth Barrett Browning’s love letters and she soppily quotes Browning at him. Just then, by the Christmas tree, both Virgil and Morgan are shot in the back by a shotgun blast through the window and Morgan dies instantly. This is how it really happened, remember. She said so.

Wyatt decides that all the Earps and Sadie will go to California with Morgan’s body so with a large armed escort his party drives out to Benson (not Tucson) to take the train. And this is where history is really abused big time.

The Earp party is shadowed by a Clanton posse (Ike had run away from the OK Corral fight – which is true) and just before the Benson station the Earp supporters ambush the Clantons and shoot them down. Meanwhile, Wyatt is getting his family onto the train. There is another blast through the window but this time Wyatt takes Doc’s sawn-off shotgun and shoots down both Stilwell and Ike Clanton. At this point Doc announces that their work (their revenge work, he must mean) is done so there is nothing to stop Wyatt going off with Sadie to California. Framing shot through the railroad car window of Wyatt and Sadie kissing, Fin.

This really is a bit naughty. As Mrs Earp had introduced the story by telling us that she would recount what really happened, and by no stretch of the imagination could this possibly have happened, we are left with the unsavory conclusion that the whole story, by Boyer, Josephine Earp, the TV guys, or all of them, was a pack of lies.

Indeed, in the 1990s, Western researchers and authors of new Earp books identified several discrepancies in the book and began to challenge the authenticity of the so-called Clum manuscript. They also claimed to have identified factual errors and inconsistencies in other books published by Boyer, leading to an increasing number of questions about the truthfulness of his work. A 1998 investigative article in the Phoenix New Times revealed that Boyer could not prove the Clum manuscript existed and refused to allow the reporter access to the source documentation. Boyer argued that he “had a license to say any darned thing I please”.

Jack Burrows, who wrote the rather good John Ringo, The Gunfighter Who Never Was, put it well when he said, “How can he just take a stack of material and give it a name that has nothing to do with what’s included? You can take a cowpie and call it filet mignon, but somebody’s going to catch on during dinner. This is just gobbledygook.”

Well, see it, once, as part of the Earp canon. It’s available on YouTube. But don’t expect a lot. In fact, don’t expect very much at all.

There was also a musical in 2011, billed thus: “Eleven gutsy women give voice to the untold story of the American frontier in the compelling new musical I MARRIED WYATT EARP.” If that’s your bag.

The other 1980s Wyatt Earp would be much more enjoyable and more professionally made. We shall review that next time – so come back soon!