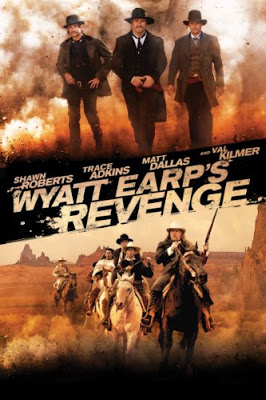 The Darren Benjamin Shepherd screenplay from a story by Jeffrey Schenck and Peter Sullivan is, like most Wyatt Earp tales, complete hooey historically, but we don’t watch screen Wyatts for fact; we watch them as fiction.

This one starts in San Francisco in 1907 with a young journalist (David O’Donnell) interviewing an aging Wyatt (he would actually have been 59) about an event that took place when he was in Dodge in 1878. The older Wyatt is played by Val Kilmer, 53. Mr Kilmer was of course Doc Holliday in 1993, in Tombstone, so he joins the select number of actors (two, I’d say) who have played both Doc Holliday and Wyatt Earp, and you get a prize if you can say who the other was. The younger Wyatt, for most of the film, is played by Canadian Shawn Roberts, 28 in 2012 (Wyatt was actually 30 so it’s pretty close). This was Mr Roberts’s first and last Western, to date. He’s OK, I guess. He plays a rather stern and unsmiling Wyatt, very tough, naturally.

The plot is based on a soft-focus lovey-dovey romance between Wyatt and the singer-showgirl Dora Hand (Diana DeGarmo). There is no mention of Earp’s real consort, his common-law wife, the prostitute Mattie Blaylock. There is actually no evidence at all for any affair between Earp and Hand.

Spike Kenedy (Daniel Booko), who has become in this film a sort of outlaw leader with a gang (he wasn’t), shoots at night into the house of his enemy Mayor Kelley (which is helpfully signed MAYOR KELLEY) and kills Dora – Kelley is away at Fort Dodge at the time. That part is true.

Hand was a dance hall singer and actress, born c 1844, and according to Kathy Weiser in her 2010 Legends of Kansas article James H. ‘Dog’ Kelley, she was romantically linked with the mayor. In the 1943 movie The Woman of the Town she has an affair with Bat Masterson. In a 1964 episode of Death Valley Days she was the lover of Kenedy (called Slim Kennedy) whom she nurses after he is shot by Mayor Kelley. I don’t know how much if any evidence there is for all these romances. Little, I suspect. Stuart Lake, in his sensational and almost hagiographical 1931 account of Earp, Frontier Marshal, said of Dora that she “was the most graciously beautiful woman to reach [Dodge] in the heyday of its iniquity” and that she was “a demurely clad, intensely practical, generous, forceful woman, to whom no appeal for the succor of another’s trouble would go unheeded.” But that’s Stuart Lake, so whether that’s true or a load of bull is open to question.

Marshal Wyatt Earp, as angry as he is sad at Dora’s demise, raises a posse to track down Kenedy. Of course Earp wasn’t Marshal of Dodge, or indeed anywhere else, and in reality it was County Sheriff Bat Masterson who led the posse, of which Assistant Marshal Earp was a member. But in this version Bat (Matt Dallas) is little more than a flunky. They also have with them other minions: Charlie Bassett (Scott Whyte) is on the posse and later Wyatt recruits Bill Tilghman (Levi Fiehler) as he is half Indian and a famed tracker. Bassett was in fact Marshal of Dodge then. Tilghman, who was not half Indian, would become Marshal of Dodge but not until 1884. In 1878 he was a deputy to Sheriff Masterson.

Wyatt blames all the violence on the Civil War. “You have to understand the War Between the States. The war formed us, made us who we are. After killing your own cousins, your own brothers, killing strangers meant nothin’. Lawless times followed those long dark years.” He also tells how his family suffered when his daddy went off to the war (he didn’t actually, though two of his brothers did).

What really happened? Well, Jim Kenedy, known as Spike, was the son of rich rancher Captain Mifflin Kenedy (below) of the Rancho de Los Laureles in Texas. The younger Kenedy, a known rake, had got into a scrape in Ellsworth back in 1872 when he shot cattleman Print Olive, a great character himself, whom he accused of cheating at cards. Olive’s bodyguard and fixer, Jim Kelly, shot Kenedy in the leg. Friends of Kenedy got him away and back to his daddy’s ranch. He seems to have led a reasonably quiet life there for the next five years but Dr Henry Hoyt, who knew him well, recounts in his highly enjoyable memoirs A Frontier Doctor (a great read) how Spike could not resist the siren lure of Dodge City.

Spike seemed to think that his daddy’s wealth meant that he was above the law. In July 1878 he was arrested by Assistant Marshal Wyatt Earp for carrying a pistol in town and was fined. A month later he was back in court and fined again after being arrested by Marshal Bassett for disorderly conduct. Kenedy complained bitterly about these arrests to Mayor James ‘Dog’ Kelley but Kelley gave him short shrift, saying he backed his officers to the hilt and Kenedy had damn well better behave while in Dodge. Some versions have Kenedy being thrashed by Kelly in a fistfight and going off to Kansas City to recover from his bruises. At any rate Kenedy vowed that he would get revenge.

Kenedy came back to Dodge with a fine racehorse. Kelley had gone off to Fort Dodge for medical treatment and during his absence allowed actresses Fannie Garretson and Fannie Keenan (the latter the stage name of Dora Hand), who were appearing at the Varieties Theater, to use his house. At about four in the morning of October 4, four shots were fired through the thin walls into Kelley’s bedroom, killing Dora Hand as she slept. Assistant marshals Wyatt Earp and Jim Masterson (Bat’s brother) investigated. In the Long Branch saloon the bar tender told Earp that Kenedy had left shortly before the shots were fired and returned soon after. Earp and Masterson then found a friend of Kenedy’s who confirmed that Kenedy had fired the shots.

The next morning Bat Masterson put together a posse consisting of himself, his deputies Bill Tilghman and Bill Duffy (who does not appear in the movie), with City Marshal Bassett and Assistant Marshal Earp (presumably the last two were deputized as sheriff’s men because they would be out of their jurisdiction otherwise). The Dodge City Times rather sensationally called it “as intrepid a posse as ever pulled a trigger”. The problem the posse had was locating Kenedy, who had disappeared into the vastness of Kansas on his fast horse.The posse members searched for some time, in vain. As the five rested their tired horses at a ranch, almost by a miracle they saw a distant rider approaching and it was Kenedy. Their horses were scattered so they awaited Kenedy on foot. Masterson ordered that if the man tried to escape, he, Bat, would shoot at Kenedy while Earp should shoot the horse. About 75 yards in, Kenedy spotted them and went for a gun, wheeling his horse to make a run for it. As planned, Earp downed the horse and Masterson shot Kenedy in the shoulder. The posse rented a wagon and team and took Kenedy, who was badly hurt, back to Dodge.For two weeks Kenedy languished in pain in a jail cell, until his father arrived. Then he was released by Judge RG Cook. Earp always maintained it was because of Captain Mifflin and his expensive lawyers, though the Times simply reported, “The evidence being insufficient, the prisoner was acquitted.” Mifflin and his son went back to Texas. Hoyt wrote that Kenedy’s arm and shoulder were shot to pieces and he only lived a year or two more. In fact he lived six years more, dying in 1884.Such were the facts of the case. Casey Tefertiller, in the most authoritative biography of Earp, Wyatt Earp: The Life Behind the Legend, will give you a little more detail if you are interested.

Of course the movie has little truck with anything as boring as mere fact (though personally I reckon the true story would have made a great film). In this one Marshal Earp and his minions Masterson and Bassett take off their stars when Judge Hinkle (Lyle Kanouse) warns them they have no warrant and they ride out, later meeting Indian tracker Tilghman, who tracks Kenedy for them. Kenedy is heading for the Mexican border (that would be quite a ride).The movie now invents a family that Kenedy comes across, farmer Ed (Wes Brown), his wife Susie (Kaitlyn Black) and their young son Conrad (Mason Cook). Though the family welcome Kenedy as a tired traveler, Kenedy is vile and perfidious. One good thing, though: he gives the boy a derringer, and of course he’d have one, being a skunk. You know how I like derringers. The parents don’t want their son playing with firearms but that doesn’t stop Kenedy, and it doesn’t stop the boy wanting it. Later we learn that the journalist interviewing Wyatt in 1907 is a now-grown Conrad.Kenedy then murders a bill sticker who is putting up a WANTED poster on him, and shoots farmer Ed in the back. Then he does a border roll on a local lawman (Peter Sherayko, who had appeared as Texas Jack Vermillion in Tombstone) and shoots him too. When the posse come up to the farm, the boy begs to be allowed to go along, to get revenge with his derringer, but Wyatt says no dice.Now we are introduced to Sam (Steven Grayhm), a brother of Spike. He joins his bro, along with some gang members, a man in a Confederate cap and a Mexican (i.e. bad guys), played by Brian Groh and Martin Santander. The posse manages to shoot Sam and they take him to a local doctor, who seems to take pleasure on inflicting pain while getting the bullet out. The doc introduces himself as John Holliday (Wilson Bethel, joining the long list of actors who have played Doc Holliday, and often as a surgeon rather than a dentist).

Still they haven’t got Spike, though. There’s a gunfight, in which Charlie Bassett is hit, Wyatt saves Bat in extremis and they dispose of Spike’s gang. Then Spike’s dad appears, in the shape of Trace Adkins. Singer Adkins liked Westerns and did quite a few but he never really convinced me in the genre, I’m afraid.

Anyway, they finally get back. Spike dies and then Ned Buntline (Bill Wiff) appears, and presents Wyatt, Bat, Charlie and Bill each with a long-barreled Colt Buntline Special.

He says he asked Samuel Colt personally to make them (though Colt actually died in 1862). Stuart Lake claimed that dime novelist Buntline (EZC Judson) presented these specials to Earp, Masterson, Bassett, Tilghman and Neal Brown in 1876 (though in fact Brown was not a lawman at the time).

If the gun existed at all (and the balance of probabilities is that it did not) it certainly had nothing to do with the posse chasing Kenedy for the Dora Hand murder. Still, I suppose it makes a good bit of the film. Most screen Earps had to have one.The show was directed by Michael Feifer, his only Western. He is apparently best known for Merry Kissmas.

It’s one of those pictures where everyone is clearly wearing costume and no one looks natural in the clothes. It has all the air of one of those re-enactments such as you see in various Western tourist spots.Oh well, it’s all harmless enough. I don’t think it’s that good as a Western but as long as you don’t actually believe any of it you might be mildly entertained.