It was inevitable, once the 1970s dawned, that revisionism would have a go at Jesse James. After all, pictures like Little Big Man and Soldier Blue demolished General Custer as American hero, Doc gave us a corrupt and cowardly Wyatt Earp, Paul Newman was a drunken charlatan William F Cody in Buffalo Bill and the Indians and William Bonney became a sniveling punk in Dirty Little Billy. Of course Billy the Kid and Jesse James were outlaws and killers, so it was likely that they would come in for some demolition, but hitherto they had been, on screen, at least misunderstood and driven to crime, if not downright heroic. Anyway, in 1972 it was Jesse’s turn to be debunked. 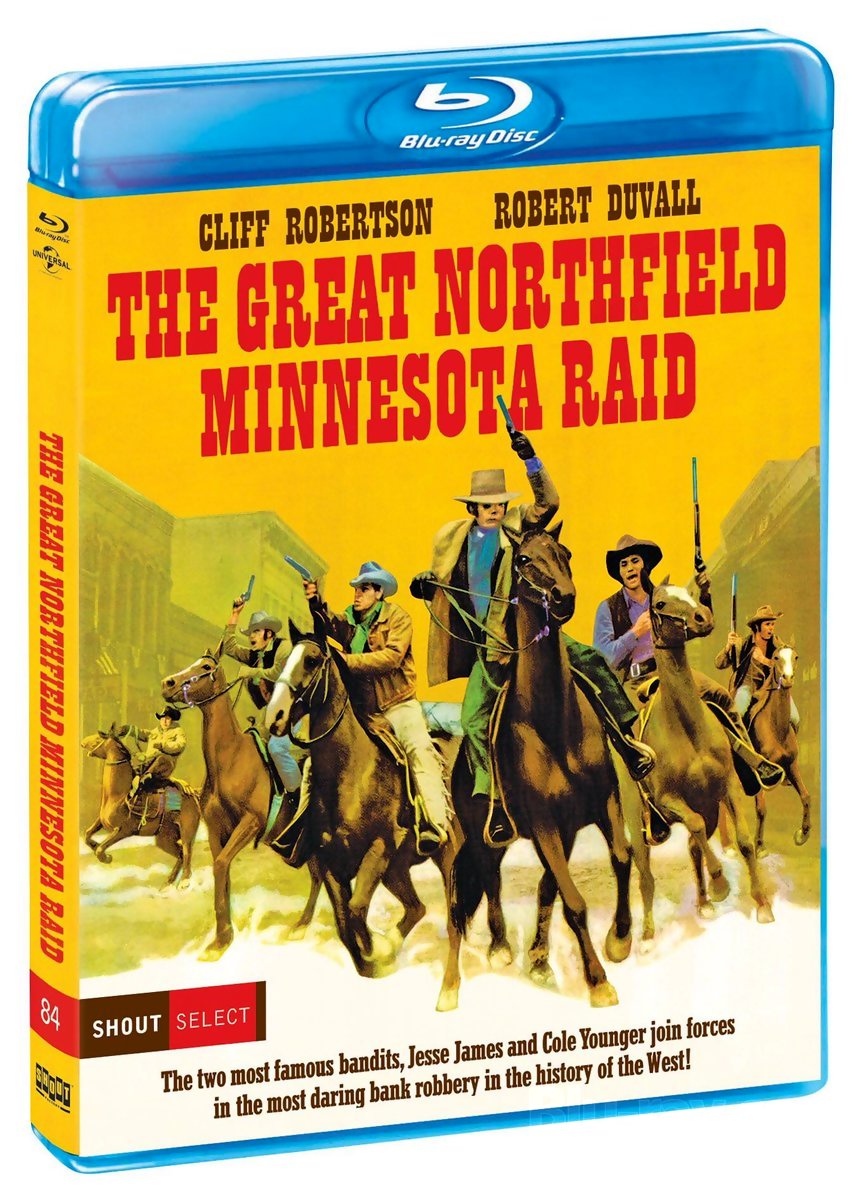 The Great Northfield Minnesota Raid had at least the advantage of limiting itself to the Northfield bank raid and not trying to recount the whole life of James and his confederates. As a result, dramatically it is of a piece and can attempt to develop character and situation.

It’s also unusual in that it elevates Cole Younger to pole position, while Jesse is relegated to the role of follower and imitator, sadistic and unintelligent. Cole, played by Cliff Robertson, is the leader and mastermind of the robbery, and indeed Cliff was leader and mastermind of the movie, being its producer as well as cast-topping star. This Cole is rather a nice man, fascinated by mechanics and of a poetic bent. “Ain’t that a wonderment!” he often says.

Actually, there is quite a lot to be said for the theory that Cole was the driving force behind this gang. He and Frank James were older and more experienced (in both war and robbery) than Jesse. Jesse had a PR machine at his disposal, a powerful one, in the form of John Newman Edwards, aided and abetted by his own letters to the press, and he was promoted and he promoted himself as the leader. But the facts seem to indicate otherwise.

Many Jesse movies suggest different motives for the Northfield attack. It was Cole’s plan or it was Jesse’s. The gang members were for it or against it. They did it because it was far away, because the bank owners were noted Northern sympathizers. It was all a set-up by the Pinkertons. And so on. This film tells us that it was Cole’s idea stolen by Jesse and then re-appropriated by Cole. Whatever.

The director and writer, Philip Kaufman, who dabbled with a cinéma vérité style, filled the movie with ‘advanced’ Victorian machines. A traction engine frightens the gang as it chuffs down the main street (it was to reappear in the next rendering, The Long Riders) and a calliope plays an important part. Its annoying music also harries us throughout the movie. Still, I do like Victorian gadgets in Westerns.

But the Butch Cassidy/M.A.S.H. baseball scene is too long and slapstick, and reminds one of the Butch Cassidy bicycle moment, although it isn’t quite as excruciating as that. The scenes in the bath house and brothel are also too long, and people shout too much. Allan Pinkerton (though the Pinkerton name is not used; studios often shied away from that, perhaps because the Pinkerton agency was still going and they were afraid of law suits), who spends most of the movie trying to get to Northfield and arrives only after the James boys have escaped and the Youngers captured, speaks exclusively in clichés. Perhaps this was deliberately mocking (we are in 70s post-modern Western territory after all) but if so it doesn’t work. The robbery is not so much a raid as a complicated scam.

This is the downside of Robertson and Kaufman limiting themselves to Northfield: they have to pad it out with inventions of this kind because there isn’t enough material for an hour and a half. Northfield usually takes up ten minutes at most of a Jesse James movie.

Kaufman wrote for the Indiana Jones movies as well as The Outlaw Josey Wales (which he started directing) and directed films as diverse as The Right Stuff, The Unbearable Lightness of Being and the Marquis de Sade biopic Quills, and so we expect an original, interesting treatment and The Great Northfield etc (such an unwieldy title) is that in some ways. It’s different, at least. And the Los Angeles Times made the good point that “Kaufman is not an angry revisionist” but he tells his story “with amused detachment”. OK. But it doesn’t quite come off. Sorry.

There are some good performances, especially from Robertson, who manages to make the odious and distinctly vicious criminal Cole Younger quite amiable. It’s a pity that he only did this and the semi-Western JW Coop in our beloved genre. We get good acting also from RG Armstrong (he was always excellent) as Clell Miller, but mostly you can’t tell the gang members apart. That’s because the film is let down by the writing.

Robert Duvall was miscast as Jesse, I think. He was outstanding in a number of Westerns but he doesn’t carry this role off at all. The New Yorker liked his Jesse, though: “Duvall gives one of his funniest and most terrifying performances, playing James as a sly, snaky guy who at times displays shameless religious hucksterism.”

Furthermore, John Pearce was a remarkably bland Frank. Fine Western character actors Elisha Cook Jr and Royal Dano are wasted in tiny parts. At least Elisha gets to fall in the mud when shot again – though he chose to fall forwards this time.

From the writing standpoint, it’s a disappointment. 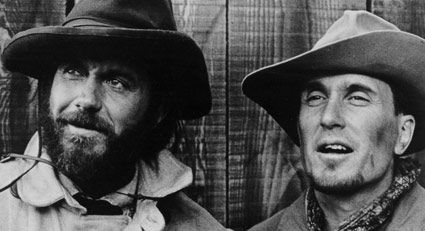 Many Jesse movies contained the fable about how he helped a poor widow about to be foreclosed on, by giving her money to pay the debt collector, then robbing the debt collector afterwards, thereby recouping his cash. The same story was often told about Butch Cassidy. It’s a legend in both cases. But this film has a revisionist take on that tale. The widow pays the landlord and Jesse kills him and gets the money back, but then he frames the widow for the crime. “She’s a Yankee too,” he says.

As had happened way back in I Shot Jesse James (1949) there is a suggestion that Jesse is homosexual. I don’t know what is gained by this.

The photography is good because it’s by Bruce Surtees and it’s filmed in attractive though very unMinnesota-ish locations, notably Jacksonville, Oregon. Reader JM talks of the “embarrassing detail” of “the Oregon mountains backdrop, sometimes snowy, which are hard to find in Minnesota.”

The music (Dave Grusin) is too Bonnie and Clyde-ish a lot of the time, when it isn’t being annoyingly ‘comic’ (as in the baseball game) or that wretched steam organ.

As so often, they go for the common lie: “Here’s where the true story of the Northfield raid began,” says the narration. It isn’t anything of the kind, of course. And naturally the absurd notion of the evil railroads justifying all the gang’s murder and thievery is trotted out yet again. “The railroads came swarming in to steal the land. Everywhere, men from the railroads were driving poor, defenseless families from their homes.” So it was alright to lynch, shoot and rob people, then.

The picture is full of historical errors, as such movies always were. We don’t mind that, except when they films claim authenticity. If you want a complete list of all the goofs and distortions, Johnny Boggs will give you that in his excellent Jesse James and the Movies (a book, by the way, that I have liberally plundered for this series of posts, and to which I am very grateful). Director/writer Kaufman was (like your Jeff) a history major and (unlike your Jeff) considered himself a James gang authority. Honestly, though, you wouldn’t know it from this movie.

Brian Garfield said the film is “superficial, phony, empty, characterless, slick, gimmicky, arty, glib, hollow and pretentious.” I don’t think he liked it. Some did. The New Yorker, for example, called it “A great, original Western, with seductive regional twangs and headlong wit and invention.” Vincent Canby in the New York Times called it “A lovely, odd sort of middle Western. That is, it’s neither conventional Western fiction nor completely documented fact, although it makes full use of history and is as crammed with the artifacts of 19th-century America.” Hmm, “full use of history”, eh?

I reckon Variety got it right when it said that the movie “may be a valiant attempt but fails to come off. Primarily, this is due to utter lack of sustained narrative, confused and inept writing, over-abundance of characters difficult for ready identification, often apparent indecision whether to make this drama or comedy and a mish-mash of irrelevant sequences.”

It didn’t get very far at the box-office. That year’s ticket sales for Westerns went to Jeremiah Johnson, The Cowboys and Joe Kidd. 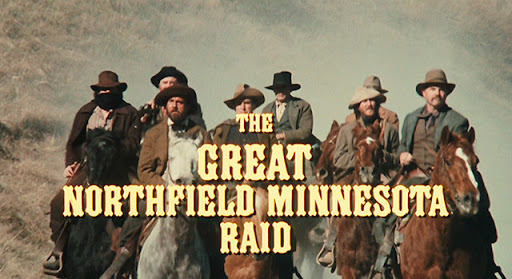 It’s interesting that this was the only big-screen movie devoted to Jesse James in the 1970s. People were asking questions about the whole concept of the Western, indeed of ‘The West’. The simple, not to say simple-minded idea of a Robin Hood figure riding the range was beginning to seem at best implausible and really rather childish.

But myths have a life of their own, pards, and Hollywood would return to the story of Jesse James – as shall we!

PrevPreviousOnce Upon a Time in Hollywood (Columbia, 2019)
NextThe Long Riders (UA, 1980)Next

PrevPreviousOnce Upon a Time in Hollywood (Columbia, 2019)
NextThe Long Riders (UA, 1980)Next
Jeff Arnold © 2022 – All rights reserved – Designed by BetterCallChris
Scroll Up