The other day we were talking about Tommy Lee Jones as Duke Montana, a former screen cowboy in a movie-about-a-movie, The Comeback Trail (click the link for our review). There is of course a whole sub-genre about the film within the film, as Bill Shakespeare might have called it, had he been hanging in Hollywood. And actually, I have just finished The Brave, the latest novel of Nicholas Evans, of The Horse Whisperer fame, and wouldn’t you know it, it’s all about Ray Montana, a TV-Western cowboy whose career is on the downward path – they are canceling his show Sliprock – and how it all leads to death in Tinseltown. Quite a good read, actually. Well, I finally watched Quentin Tarantino’s latest, Once Upon a Time in Hollywood, last night, and while it is in a much hipper category (although words like hip are probably not hip any more, they were in the late 60s when this is set) there are definite similarities, to both The Comeback Trail and The Brave. 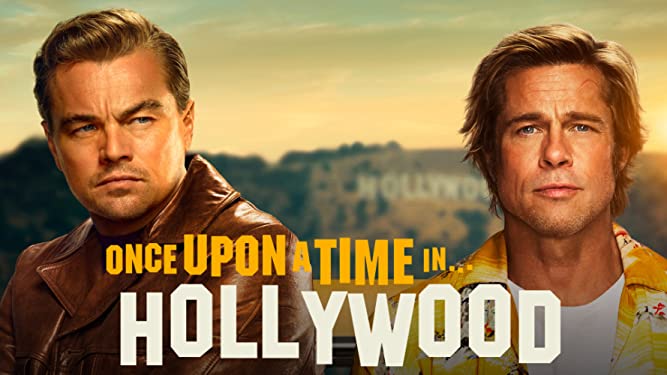 We get right away that the very title has a nod to the Western, or the spaghetti western anyway, and indeed, the opening scene is of NBC’s Bounty Law, a sixties show about a Steve McQueen-style bounty hunter, Jake Cahill (not Cahill, US Marshal, natch) played by the Burt Reynolds-ish Rick Dalton, played by Leonardo Di Caprio. He’s not that McQueenish, though, because Josh Randall used to give his bounty away to worthy widows so often it’s a wonder he made a living, while Jake Cahill just blasts the bad guys away and cashes in the bodies for the rewards. Actually, Rick only just missed out on McQueen’s part in The Great Escape. We’ll meet Steve later. 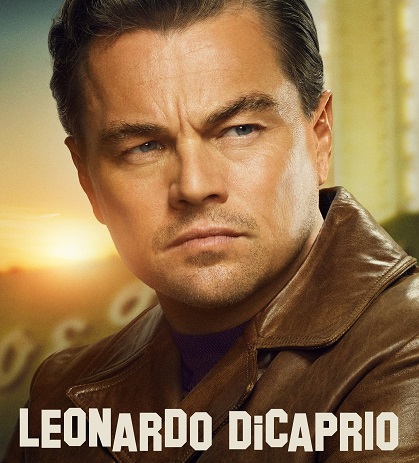 On the set we meet not only Rick but his stunt double, the Hal Needham-ish Cliff Booth, played by Brad Pitt. Rick cheerfully accepts that Cliff “carries his load”. Cliff is more than a stunt double. He’s Rick’s driver (Rick has had too many drunk driving incidents to drive himself), minder, handyman, hell, almost husband, in a platonic and ever so slightly weird way.

Now we see Roman Polanski (Rafal Zawierucha), dressed like Austin Powers, driving a nifty little MG TD, going to pick up Sharon Tate (Margot Robbie) from her Pan Am flight at LAX. It’s 1969, you see. Quite a coincidence but Roman and Sharon are living right next door to Rick. Rosemary’s Baby having been a smash last year and Polanski on a high, Rick reckons he might get a gig.

What with Bounty Law being canceled, he needs a few parts, though he has just landed one as the bad guy in the Lancer pilot, but as producer/publicist Marvin Schwarz (he’s careful to say he’s not producer/publicist Marvin Schwartz) tells him, constantly being the bad guy bested by the hero on other people’s shows will send his career down the pan. Has he considered going to Rome? Sure, spaghetti westerns are garbage, but at least he’d been leading in them. This does not please Rick (though Cliff tells him not to cry in front of the Mexican help).

This plot device is slightly odd because S1 E1 of Lancer aired in September 1968, but I don’t want to be picky. Well, I do, but I won’t. Actually, I think Joe Don Baker was the heavy in that. Oops, there I go again. To be fair, Di Caprio does look like Joe Don in his shaggy mustache.

Once Upon a Time is peppered with references, especially movie posters (Lady in Cement, Pendulum, The Wrecking Crew, Mackenna’s Gold, etc) and pop songs. The music was actually a strong point to an old-timer like your Jeff because the hits were from my generation (though sadly often covers).

At a swingin’ poolside party at Hefner’s Playboy mansion we meet, as well as Mama Cass, Steve McQueen, hot from Bullitt and The Thomas Crown Affair, and I must say, Damian Lewis, the Homeland guy, does an amazingly good job of the impersonation. He looks just like Steve. He observes Sharon with some interest, though he is told that she only likes short guys that look like twelve-year-old boys, so he mutters that he wouldn’t stand a chance then.

Sharon Tate as played by Ms Robbie is a curious figure. It is said that Tarantino wanted her to be ‘angelic’, and her sister Debra was apparently very happy with the portrayal, but to me, dolt that I am, she just came across as an airhead. 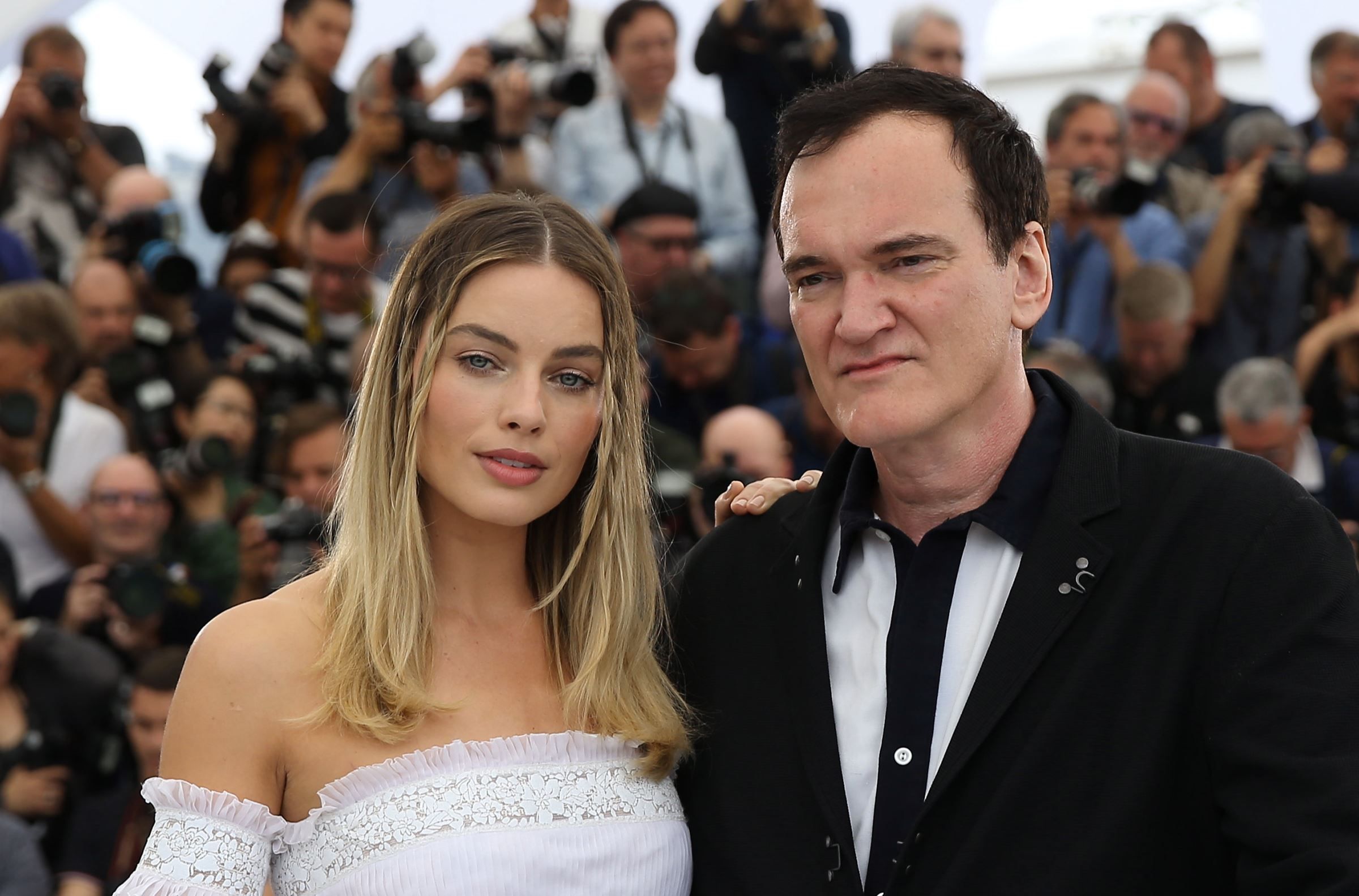 We also meet the two Lancer stars James Stacy (the excellent Timothy Olyphant, for me most memorable as Raylan Givens) and Wayne Maunder (former teen idol Luke Perry who did a few TV Westerns and was Goodnight in Goodnight for Justice). 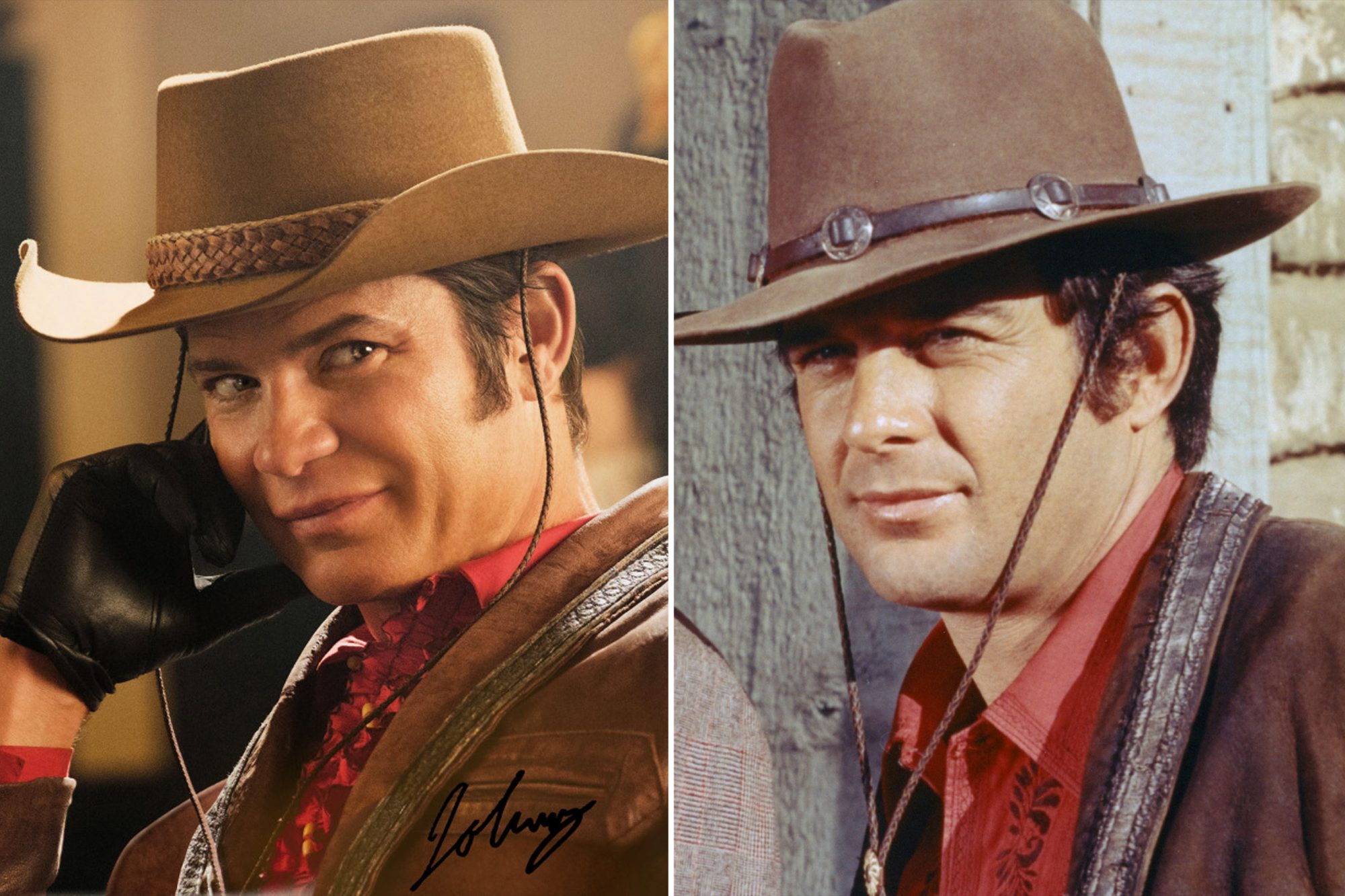 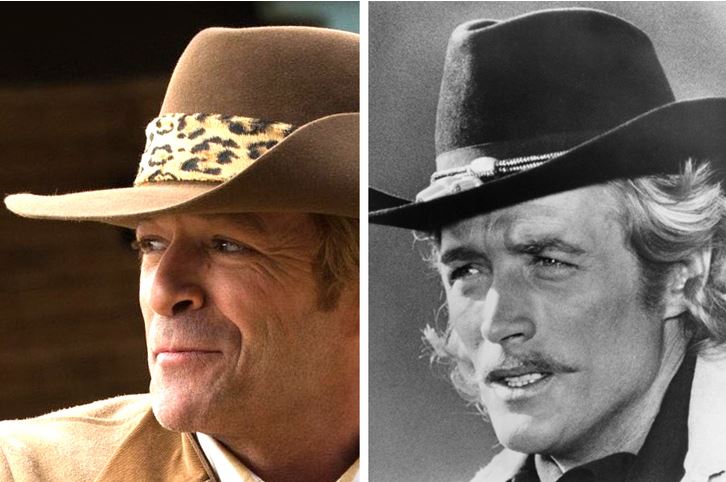 There’s an amusing fight between Bruce Lee (Mike Moh), who reckons he could beat Ali, and Cliff. It is said that China wouldn’t give the movie a release certificate unless the Lee scenes were edited out (he gets his ass kicked) but Tarantino wouldn’t do that, so I guess Chinese fans are having to watch bootlegs or something. Tarantino and the casting director sure did a good job on lookalikes. 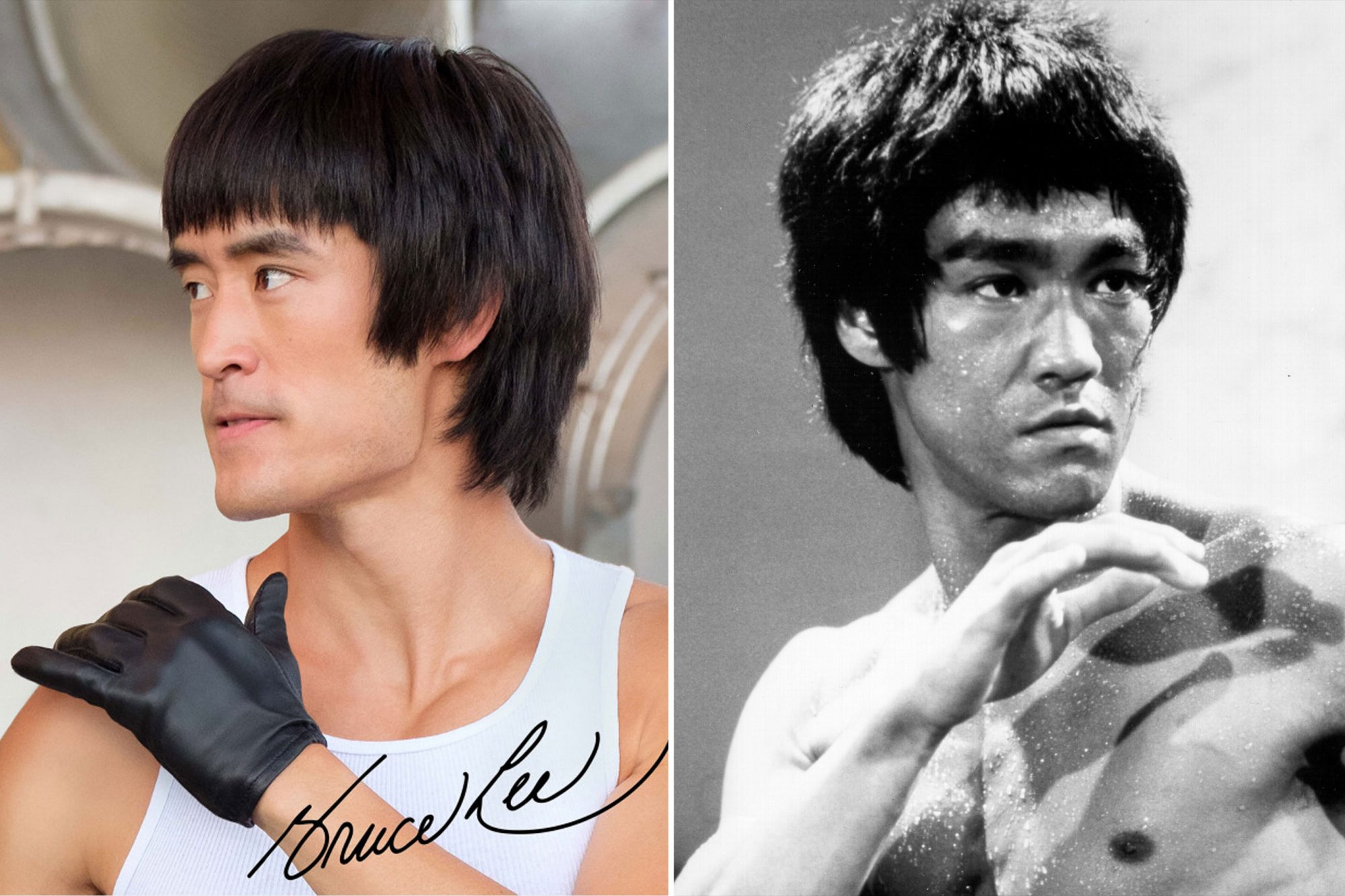 Other Tarantino regulars get parts here and there, such as Kurt Russell and Michael Madsen – and Madsen’s yellow Cadillac Coupe de Ville. Tim Roth was to have been a butler but his scenes were deleted.

Then there’s a scene up at the Spahn movie ranch now being used by the Manson ‘family’, hippies of an especially weirdo kind. The ranch’s owner George Spahn lets these people stay, in return for favors from one of the raunchier ones. This old geezer, who lives than a less then salubrious home, is Bruce Dern, by now a Tarantino regular and one of the great Western bad guys of all time – hell, he even shot John Wayne dead. 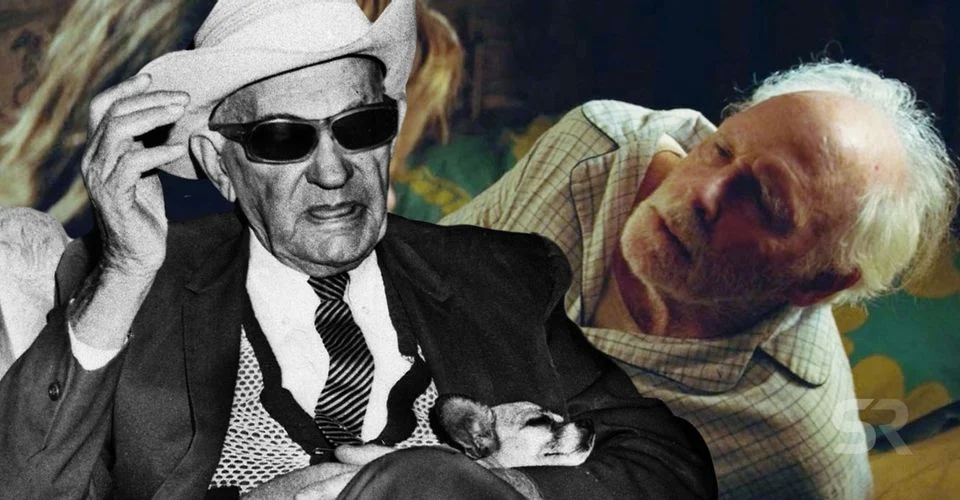 Well, Rick and Cliff do go to Italy, to work with the “second-best” director of spaghettis, Sergio Corbucci (Tarantino clearly a fan, as The Hateful Eight’s references to Il Grande Silenzio showed). I loved the posters of Rick/Leonardo as Nebraska Jim in those pictures. 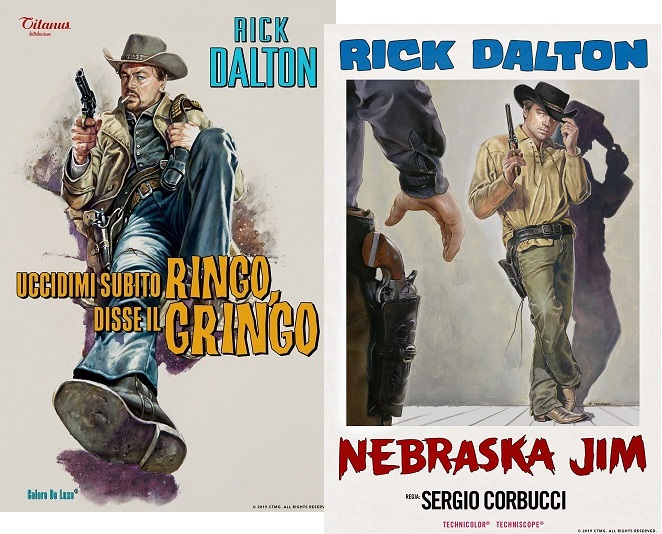 There are certainly wagonloads of other references that I am not enough of a movie buff to get. No one could be more of a movie aficionado or a movie business insider than Quentin Tarantino, and the picture is chock full of allusions that will please filmoholics.

Once Upon a Time in Hollywood is way too long but it is entertaining, and very well staged. And there are enough Western references to keep a sad case like your Jeff amused. I thought the pre-film warning classically American: it cautions that the picture contains “alcohol use, smoking and violence”. There’s priorities for you.

Barbara Scharres on rogerebert.com said “Once Upon a Time … in Hollywood is a wackily obsessive buddy movie set in 1969; it’s a Western; a time capsule; and a hybrid action comedy with a hilarious past-blasting look at the Sixties that will have boomers screaming in delighted recognition of the TV shows and radio commercials, the Pan Am planes, the products, paraphernalia, and cultural markers that pour out of Tarantino’s overheated memory like a cornucopia of kitsch.” There you go.