After a spate of early- and mid-1950s Westerns about the James brothers, over which we have recently mused on this blog, big-studio Fox decided on a fancy remake of its highly successful (but now rather dated) 1939 picture Jesse James, which had starred Tyrone Power and Henry Fonda.

They engaged Nicholas Ray to direct it, and right away there seems to have been some kind of divergence of views over how the picture should be. Fox really did want a straight remake but Ray had helmed and written the arch- teen rebellion movie Rebel without a Cause in 1955, earning an Academy Award nomination for the screenplay, and he said that he wanted to re-interpret the Jesse James tale in that context. He even wanted James Dean, star of Rebel, as Jesse but of course Dean had died in an auto smash between the wrap and the release of Rebel. So in the fall of 1956 Ray got his cast and crew together for The True Story and found that he had very different stars as Frank and Jesse.

Robert Wagner topped the bill as Jesse James and Jeffrey Hunter was Frank. Wagner was certainly no James Dean. ‘The Brylcreem Kid’ as he was known had been signed to Fox in the early 50s and built up into a star. He did romantic roles but also impressed with his shell-shocked war veteran in With a Song in My Heart in ’52 and in the noir A Kiss before Dying in ’54, the latter with Hunter. He clearly wasn’t just a pretty-boy actor. You wouldn’t really call him a Western specialist, though he had done three, The Silver Whip with Dale Robertson in 1953, Broken Lance (billed second to Spencer Tracy) in 1954 and White Feather, also with Jeffrey Hunter, in 1955. So he was at least reasonably believable in a Stetson.

Hunter had a slightly stronger Western profile. As well as White Feather, he had been one of the Three Young Texans in 1954, was one of the Seven Angry Men in 1955 and one of The Proud Ones with Robert Ryan in 1956. He also did Gun for a Coward with Fred MacMurray that year. Most notable of all, he had been Martin Pawley, second billed to John Wayne in The Searchers for John Ford.

Myself, I never found either actor especially strong in Westerns, and they were probably both too ‘straight’ for these roles, certainly no edgy adolescent rebels, but the pair were biggish names in the late 50s and weren’t bad, I guess. Hunter was 30, to the real Frank James’s mid-20s at the time and Wagner was 26 to Jesse’s actual late teens, but they both looked quite young and it was close enough.

Ray was a prominent director, an artist, really. He had his issues, especially drug and alcohol related ones, and he rarely had comfortable or convivial relationships with studio execs. Star Wagner said he found Ray to be “a very strange man” and “a very confused and convoluted personality, even for a director.” But Ray was recognized in the business as a real talent. As far as the noble genre went, he had done three before The True Story: the quite fine contemporary Western/rodeo picture The Lusty Men in 1952, the oddball oater Johnny Guitar in 1954 and a rather humdrum sagebrush saga with James Cagney, Run for Cover, in 1955. For the time, which was after all the high-watermark of the big-screen Western, he didn’t do a great number. He was not at all happy with The True Story, which was, as he saw it (and he said he only saw it once), butchered by the moguls, who simply did not allow him to make the picture he wanted. According to Johnny Boggs in a True West article, Ray called it “f- ing god-awful”.

It wasn’t actually awful, in my opinion anyway. It’s quite entertaining, and despite the slightly less convincing leads compared with the original, it’s quite well done. The Christian Science Monitor, not a regular read in my case but anyway, said that “If truth can be stranger than fiction, as the saying goes, there are also times when truth can be duller.” The critic had evidently swallowed the notion in the title that it was ‘true’. And actually it wasn’t dull.

Of course the title was misleading. It wasn’t the true story at all. Ray defended it to the Los Angeles Times, saying, “Ours isn’t the ‘true’ story of Jesse but it’s as true as anyone living these days, and possessed of our insight, can make it.” This was disingenuous, to say the least. The picture may have been slightly more accurate historically than predecessors, including the ’39 one, but it still contained a great many of the myths, legends, distortions, changes of names and chronology, and of course the clichés that other Jesse James movies contained. Not that this matters, particularly, in a Western movie; it’s not supposed to be a documentary. But it is odd that studios felt the need to claim authenticity, to pretend that audiences would see the ‘real’ Jesse James. Other Westerns did this too, of course. How many times we have seen on on-screen intro to the effect that What you are about to see really happened. This one starts with: Much that you will see here is fact and much is as close to what actually happened as any man can testify. It speaks to a desire on the part of movie-goers to see an historically accurate portrayal, and a willingness of marketing people to tap into that. What Fox meant was “as close to what actually happened as this studio can or wants to get away with.” But I’m afraid that if you go to the movies to learn about nineteenth-century American history, you are on a hiding to nothing.

It opens with Northfield, and the James gang duly gets shot to pieces. Back in Clay County, Missouri, Jesse’s mother, step-father and wife have gathered to worry and fret. And we get the first of a series of flashbacks which tell the story of Jesse James. These are done (to Ray’s annoyance) with smoke and the screen blurring, just in case audiences were too dumb to understand, otherwise.

Writer Walter Newman, thrice Oscar-nominated and later (uncredited) first writer of The Magnificent Seven and also author of Cat Ballou, stuck quite closely to the Nunnally Johnson script of the original, adding little and only removing some of what had by 1957 become anachronisms or slightly embarrassing, such as Negro servants (or slaves). Variety wasn’t greatly impressed, though, reporting, “Dialog, too, is poor, continually veering from period to modern idioms in the script.”

The new picture also liberally reused footage from the 1939 one, notably the scenes of Frank and Jesse riding through the plate glass window of a store in Northfield, ‘Jesse’ jumping from a horse onto a train, and the brothers spurring their horses over a high bluff into a lake. The controversy caused by that act of animal cruelty did not prevent Fox from recycling it.

There was even a re-use of an actor: John Carradine had played the assassin Robert Ford in ’39 and now re-appeared, as the Reverend Jethro Bailey, who baptizes Jesse and Zee (Hope Lange, a Ray choice). An odd element, though, is that the name ‘Major Rufus Cobb’ has been retained but for a totally different character. Cobb is no longer Henry Hull, the dogmatic newspaper editor of ’39, but seems to be Zee’s Pa or guardian, a skinflint, played by Frank Overton.

The photography, very good, was by Joe MacDonald this time, but without those lush green Missouri locations – it was shot up at the Fox ranch in Malibu Creek – probably cheaper. It was in CinemaScope, though. The original music is by Leigh Harline and more dramatic than 1939 when it was, shall we say, martial.

The Fords are well acted, especially Carl Thayler as ‘Robby’ Ford (I don’t know where the ‘Robby’ came from), and the final sequence, where the assassins rush out and boast about shooting Jesse, is very well done.

There’s a blind ballad singer, the Billy Gashade figure, who wastes no time at all, singing his completed version of the Ballad of Jesse James about 20 seconds after Jesse has been shot. I also liked Alan Hale as Cole Younger (the other outlaws are much more delineated this time).

On the other hand, Overton and Alan Baxter as the detective are pale imitations of 1939’s Hull and J Edward Bromberg respectively. Movies were chary about using the Pinkerton name; the company was still going and maybe there was nervousness about lawsuits. Thinly disguised names were preferred. This time it is the Remington Detective Agency.

Saintly mother of Frank and Jesse (Agnes Moorehead), who is for once correctly billed as Mrs Samuel – in some films she grows an -s and becomes Mrs Samuels for some reason – says of Jesse, “He’s a good boy. The Yankees drove him to it.” She meant the life of crime. He’s kind to animals too. The claim “We never owned a slave” is plain fraudulent, as is the statement “Jesse was carrying a white flag. We weren’t even armed.” It’s the usual whitewash, in fact. Well, by now all this was accepted as ‘fact’. It had been repeated in film after film right back since the silent days and many people believed it. Probably many still do.

The New York Times wondered, “The first question, naturally, is what in thunderation can be said about old Jesse that hasn’t been said before,” and judging by this picture the answer has to be ‘Not much’. Still, it rattles along, and is nicely done, with decent production values.

The picture made $1.5m in US rentals but on a $1.58m budget, so that was a disappointment after the original had been such a box-office hit. It certainly couldn’t compete with that year’s biggie Western Gunfight at the OK Corral, which made $12m and was the year’s No 4 grosser. 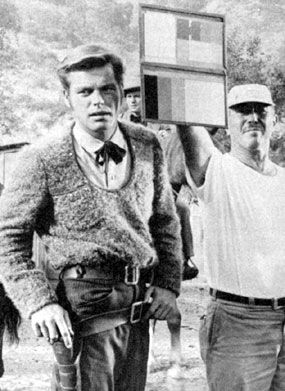 Variety was dismissive. “There’s nothing new in this glorification. It’s a routine offering for the outdoor market.” It thought that Wagner and Hunter were only “adequate” and were “going through the motions.”

Myself, I think it’s rather better than that, and I don’t mind it. It’s not a great Western or anything but it was certainly the best Jesse telling of the decade. Mind, with the likes of Jesse James’ Women as competition, that wasn’t hard to do.

The picture has its fans – The BFI Companion to the Western, for example, which called it “a marvellous movie” and said that it “exemplifies on a psychological interior level and a social, external level Frederick Jackson Turner’s thesis of the frontier as a ‘meeting place between savagery and civilization’.” I might be tempted to agree with that if I understood it.