Jesse is a two-gun womanizing rogue

The first quarter of an hour of this one shows us Milton Farnsworth (Bob Hope) in NYC as a spectacularly unsuccessful life insurance salesman who sells a policy to Jesse James. Milton’s boss Titus Queasley (the great Will Wright), furious, sends Milton out West to protect Jesse, so that no claim may be made on the policy.

“But Mr. Queasley, I’m liable to get killed!”“Stop trying to cheer me up.” 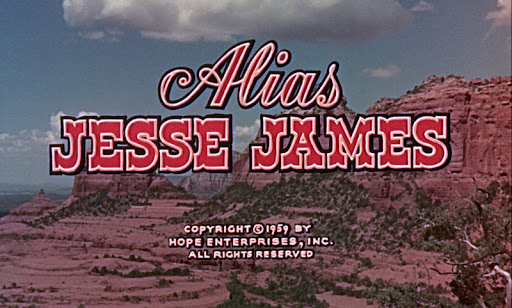 On the train West, footage from the hold-up scene looks suspiciously like the one in Fox’s 1939 movie (reused in the 1957 one) as a stuntman runs along the top of the train… 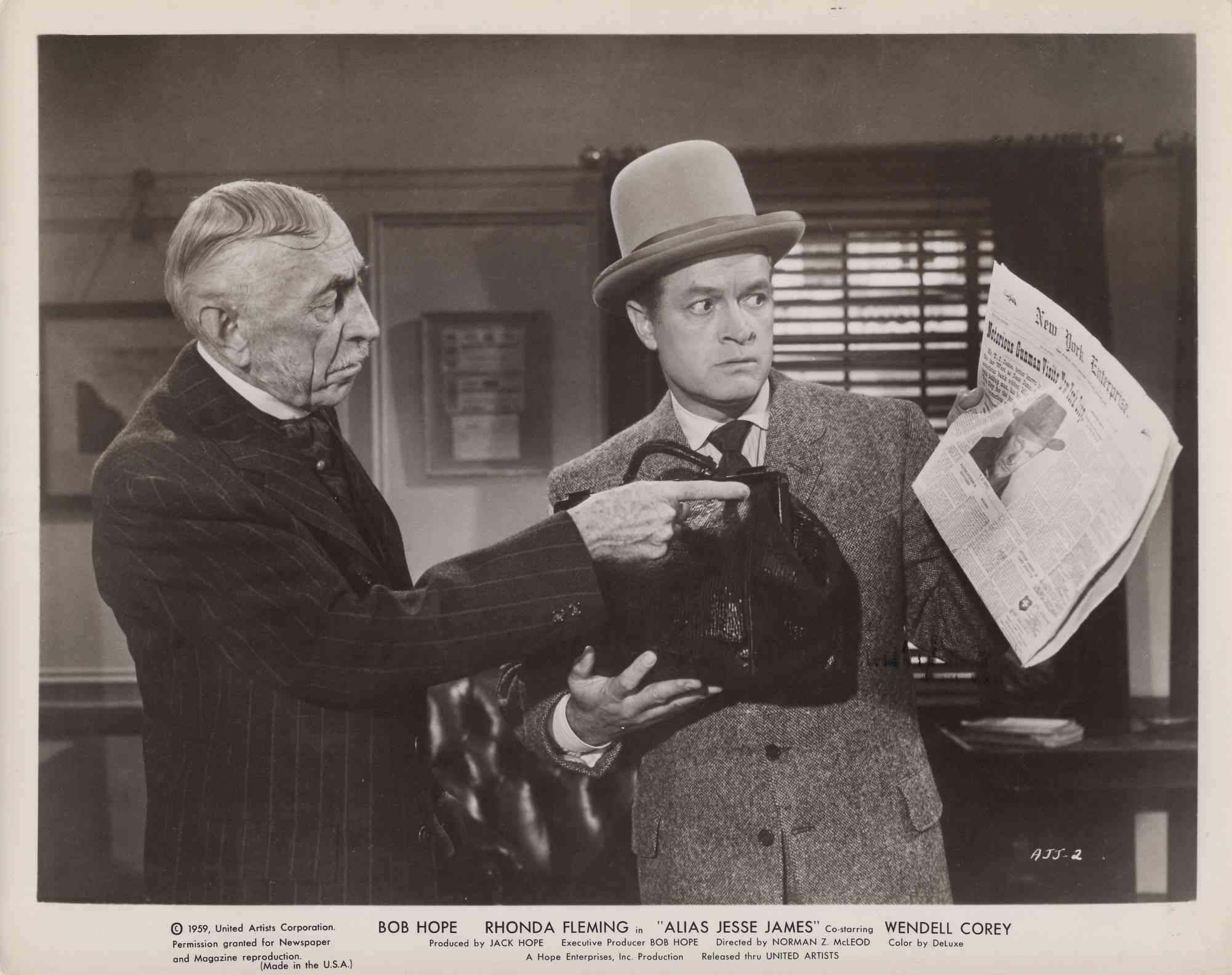 Remember how we were saying that back in 1951 producer Nat Holt got his Coreys and Careys mixed up and cast Wendell Corey as Frank when he meant to have him play Jesse? Well, this time Bob and Jack Hope, the fraternal producers, got it right and Corey was Jesse. By this time Corey was nearer 50 than 30, and it is clear that comedy wasn’t really his strong suit, but never mind.

He is a two-gun womanizing rogue who has the town in his pocket. His dame is la belle Rhonda Fleming but she inexplicably takes a shine for Milton…

The outlaw has his own plan: to have Farnsworth killed while the insurance man is dressed as Jesse, so that James and his soon to be “widow” Cora Lee (Rhonda, said by Jesse to be “as pretty as a new bank”) can collect on the $100,000 insurance.

There’s a great part where Bob walks through a store window in reference to the stunt that appeared in those two Fox Jesse movies where the Jesse and Frank ride through one.

I liked Ma James (Mary Young). She looks like a sweet little old granny but cleans the guns and shoots straight too. She reminds me of Zeffie Tilbury in Sheriff of Tombstone, a matriarch you will doubtless remember and admire. 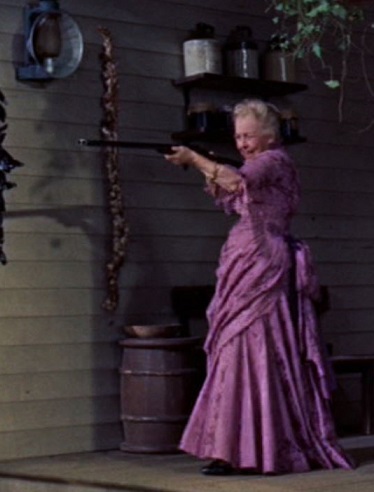 Ma James: It’s important to keep a gun clean.Milton Farnsworth: Oh I know. A guy can get blood poisoning from being killed by a dirty bullet.

There’s the obligatory song by Rhonda. She was beautiful and a good actress but… Still, it does improve when Bob joins in.

Bob is told by a little Missouri boy in spectacles picking out a simple tune on a piano that he is Harry Truman. 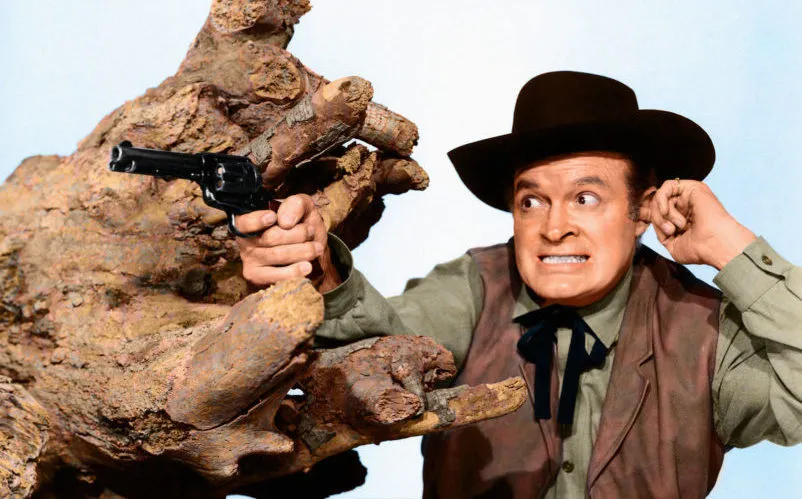 Jim Davis is Frank. Glenn Strange the Great is a James gang member. As toughs, mostly, you can spot the likes of Jack Lambert as Snake Brice (he informs Bob of the etiquette in the Dirty Dog saloon, Killin’ will get you ninety days. Cheatin’ will get you shot), Mike Mazurki, Nestor Paiva, and other distinguished alumni of the Western movie. Gloria Talbott is an Indian princess.

The last ten minutes of the movie are fabulous. A whole host of great Western stars were featured briefly (sadly some of their scenes were later deleted in theatrical releases because of questions of the rights, but happily they were restored for the DVD): Gene Autry, James Garner as Brett Maverick, James Arness as Matt Dillon, Hugh O’Brian as Wyatt Earp (with Buntline Special), Fess Parker as Davy Crockett complete with coonskin hat, Roy Rogers in a fancy shirt, Ward Bond, in his last film (“Well, better get back to the wagon”), stern Iron Eyes Cody (Bob tries to sell him insurance on the train), Scatman Crothers as the railroad porter, Gail Davis as Annie Oakley (even more flashily dressed than Roy), Bing of course, who says of Bob, “That feller needs all the help he can get”, Jay Silverheels as Tonto with a wonderful line (though the Lone Ranger is nowhere to be seen) and, reverent hush, please: Gary Cooper as the sheriff, who has one word to say. It is, of course, “Yup.”

Of course in the end Farnsworth is celebrated as a hero, marries Rhonda, and becomes president of the insurance company.

It was written by ‘Daniel B. Beauchamps’, his only credit, though he sounds suspiciously like DD Beauchamp, with input from Robert St Aubrey, Bert Lawrence and William Bowers. Bowers was quite a Westernista and had worked on The Gunfighter with André De Toth, respect, but was more used to comedies such as The Sheepman and Support Your Local Sheriff!, great pictures both.

Norman Z McLeod directed – his last movie. He had done Monkey Business and Horse Feathers with the Marx Brothers, and later The Secret Life of Walter Mitty, so knew a thing or two about comedy. He was also an old Bob Hope hand. He had helmed The Paleface in 1948, for example, another superlative comedy Western.

AH Weiler in The New York Times was a bit down on it. “The Old West, it would appear from this uneven excursion, is occasionally funny but not an uproarious place to visit.” That’s rot, Weiler. Herb Fagen, in his Encyclopedia of the Western, is more perceptive: “This hilarious comedy is one of Bob Hope’s funniest films.”

Rhonda said it was “more fun and shootin’ than anything I’ve ever been in.”

This Western is a Western-lovers’ Western.

Unless you feel comedy Westerns to be faintly sacrilegious.

Well, that was the last big-screen Jesse of the 1950s. The decade hadn’t been kind to the Missouri outlaw. Mind, it was positively fulsome compared with the 1960s. But that will be for another day.