Weirdly enjoyable for a bad movie

The next Jesse James of the long series (the early 1950s B-Western sure took Jesse to its heart) was better than the likes of The Great Jesse James Raid or Jesse James’ Women – though that wasn’t hard.

Fortunately, probably, Jesse James vs the Daltons was the last of these Bs before in 1957 Fox came back with a big remake of its 1939 picture, which it called, erroneously, The True Story of Jesse James – that shall be our next review. 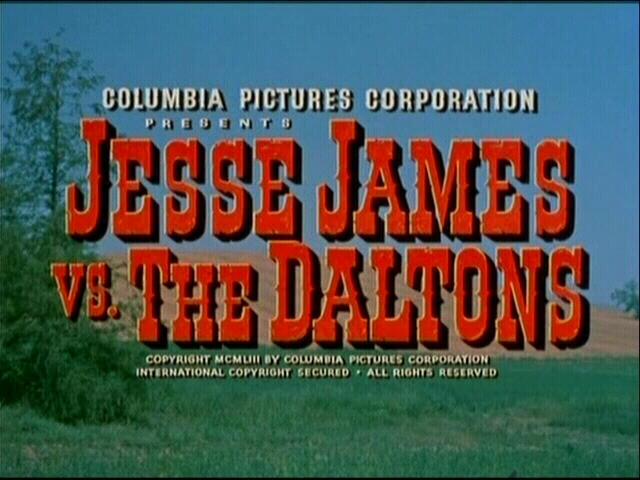 The reason that Jesse James vs the Daltons wasn’t quite as bad as the others was that it was a Katzman/Castle picture and while few would accuse producer Sam Katzman and director William Castle, who made seventeen pictures together, eight of them Westerns, of being towering figures of the cinematic art form, at least they never made a stodgy movie (and they very rarely made one that lost money, either).

And it was a Columbia picture, not an ultra-cheap Lippert one, so there was some kind of budget, and it was in Technicolor.

It was a companion piece to another versus title, The Law vs Billy the Kid, made the same year, which we reviewed as part of our Kid-o-rama season recently.

Castle just loved gimmicks and gadgets. His 1959 picture The Tingler was a horror with Vincent Price, about a scientist who discovers a parasite in human beings called a tingler which feeds on fear, and some theaters installed a gadget wonderfully named the Percepto!, a vibrating device on seats which activated with the onscreen action. That must have given the viewers a thrill.

So, as 3D was all the rage at the time Jesse James vs the Daltons came out, Castle threw everything he had into it. There are battering rams coming right at you, fists flying at you, wine gushing out of a bullet hole to drench you – it seemed.

The title was a bit naughty, though, because theater-goers might reasonably have assumed that they were buying a ticket to see a movie about Jesse James. And they weren’t. This one is about a man who thinks he might be the son of Jesse James. It turns out that he isn’t.

Probably the chief weakness of the picture is the casting of Brett King in the lead. He was a bit-part actor and this was his first lead. And his last. It was also his only feature Western. He is really quite amazingly bland.

He plays the character Joe Branch (who thinks he might be Jesse James Jr – not the real one, Jesse E James, who when he grew up played his dad in silent movies, but an illegitimate one, maybe, perhaps, oh alright then, not) and he arrives in town just in time to save a woman they almost lynched, Barbara Lawrence, Gertie in Oklahoma! being about the best you could say. Obviously, Brett and Barbara will fall in lerve.

Barbara plays Kate Manning, whose dad used to ride with Jesse James. Joe Branch has learned there’s $10,000 stashed away in Jesse’s old lair, and Kate may know where that is. What’s more, he keeps on hearing rumors that his putative pater Jesse is alive. Bob Ford didn’t shoot him; that was all a set-up.

If Jesse is alive, the Daltons will know. They don’t say why the Daltons would know but they would. A highly complex and convoluted plot is now launched, involving a fake train robbery, Bob Ford (Rory Mallinson), Frank James – who never appears – and the Daltons’ raid on the two Coffeyville banks. Joe and Bob Ford rush to Coffeyville to forestall it. Scores of townsmen and outlaws are killed in a massive 3D gunfight.

As the Coffeyville raid happened in October of 1892 and Bob Ford was gunned down in Creede in June of that year, it’s not easy to see how that might have happened, but never mind. The Daltons are wiped out. Joe and Kate hasten to church to get married. The End.

Yet, bizarrely, probably because of the Castle magic, it’s enjoyable unutterable tosh.

The writers, and you have to admire their chutzpah, were Samuel Newman (his only Western), Edwin V Westrate (famed for Renegade Girl) and our old pal Robert E Kent. You know writer/producer Bob Kent, 29 big-screen Westerns, including other outlaw ones like Badman’s Country and Bad Men of Missouri, then Roy Orbison as The Fastest Guitar Alive, wagonloads of George Montgomery oaters, The Gun that Won the West (another Castle flick) and about a million others with Gun in the title. You gotta like Bob.

One good thing about Jesse James vs the Daltons: James Griffith is Bob Dalton. So that’s a plus. He’d been Quantrill, the Apache Kid, Doc Holliday, Abraham Lincoln, Davy Crockett, John Wesley Hardin and Pat Garrett, why not a Dalton? The Daltons in this one are out-and-out bad guys who deserve to be shot down (including Emmet) in the streets of Coffeyville.

The rest of the cast is vin ordinaire, to be honest. John Cliff as Grat Dalton had been a Younger in Best of the Badmen.

Variety liked it. “William Castle’s megging is vigorous,” it reported, “the action scenes being forcefully handled.” Although Webster’s declines to give us a definition, I understand that megging is what movie directors do with their megaphones. The Hollywood Reporter sort of liked it: “The combination of lively action and the kind of sharp shooting that oater fans like goes a long way toward covering a vague story with hazy motivations that consistently leave the viewer wondering what is going on.”

OK, most of the acting leaves quite a lot to be desired, and the plot has more holes in it than the Dalton boys’ corpses, but actually, you could watch this one, if you are in a tolerant frame of mind.