The Custer that came after Richard Mulligan’s in Little Big Man (link to our review) in 1970 was in some ways very different but in some ways quite similar. Different, because the movie was filmed in Paris, France, a Franco-Italian production, with Marcello Mastroianni as Custer; similar, because Touche pas à la femme blanche was also a revisionist picture mocking of Custer, and indeed of the US Army generally. 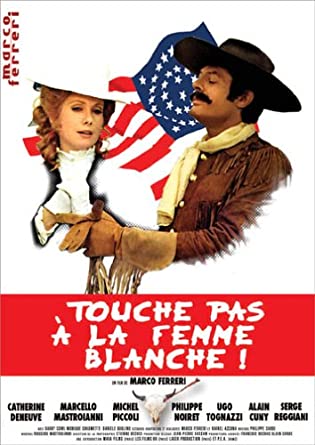 The first thing to say is that it wasn’t very good. A broad comedy, it could never be accused of subtlety. And reviews, especially Anglo-Saxon reviews, have been overwhelmingly negative. Take Time Out’s comment: “Despite that cast, the film’s pervasive shallowness and silliness render it unendurable.” Or, if you prefer, Reel Film Review’s opinion: “A sure candidate for the worst movie ever made” (a big claim, that). Still, to be fair to the film, it did have quite an entertaining quirkiness, and the basic idea, or conceit if you will, of taking a Little Bighorn story set in the US with characters in period costume but shooting it in modern-day Paris (coffee-drinkers on sidewalk cafés look startled as the US Cavalry rattles over the pavé) was actually quite amusing.

I suppose also it aimed satirically to give some contemporary (especially Vietnam) relevance to the story. The president to whom General Terry (Philippe Noiret, one of French cinema’s most familiar faces) answers is Nixon and his face on posters presides over the city. We get ideologue politicians who thirst to exterminate the red menace and are ready to use the most powerful weapons in the US arsenal to that end. They wear tuxedos throughout, to underline their rich/separate status. We get a college anthropology teacher (Paolo Villaggio, the famous Fantozzi) who eventually reveals his true colors by wearing a CIA sweatshirt. So the (rather heavy-handed) 1970s messages are clear.

It’s available on YouTube in quite good quality, in French and also dubbed into Spanish, though not, that I could find anyway, in English.

The picture was directed and co-written by Italian Marco Ferreri, Reel Film Review saying “Ferreri’s staggering lack of talent cementing his place as a hack of the highest order.” That was a bit harsh; the film wasn’t that bad. Catherine Breillat has said of him “He is considered one of the greatest European cinematic provocateurs of his time” and he did after all have eight pictures in competition at Cannes. Still, it’s a matter of taste, I suppose.

The film debunks Buffalo Bill (whom they address as M’sieur Boofalo) almost as much as it does Custer. Bill is a constant thorn in Custer’s side, upstaging him at every opportunity. What’s Buffalo Bill doing at Little Bighorn? Better not to ask. Very well played, I thought, by Michel Piccoli, speaking French with a broad American accent, he is a drunken mountebank and coward who feigns stomach ache in order to avoid falling with the 7th at the last stand. I did chuckle at his huge stuffed bison mounted on a French truck, sponsored by Conforama (a French home furnishings retail chain which I call Comfyrama).

Terry is a cynical, corrupt and opportunistic commander who observes the battle through binoculars (I know) and delights in Custer’s discomfiture.

So don’t expect much in the way of historical accuracy here. Having said that, we do get the three armies of Terry, Crook and Gibbon (whose name they pronounce with a soft G, jibbon), we get Tom Custer too, (Franco Fabrizi), and also a drunken Major Reno (uncredited actor). That’s more than some supposedly ‘historical’ Custer films give you.

The US Army imprisons some Indians and then burns them to death, and when a soldier is shot in retaliation the soldiers hang six more.

Sitting Bull, or Taureau Assis as they call him, played by Alain Cuny, from La Dolce Vita and Emmanuelle, is a dignified leader of the Sioux who finally triumphs (“but there will be more Custers to fight”), while Ugo Tognazzi, the gay cabaret owner from La Cage aux Folles, is Custer’s (fictional) scout Mitch, who, like Dustin Hoffman, serves his master loyally but secretly hates him. Mitch has a business making Indian artifacts in a sweatshop staffed by white women.

The love interest, though it barely is that, is provided by top-billed Catherine Deneuve as Marie-Hélène de Boismonfrais, a naïve woman infatuated with Custer and after whom Custer lusts. 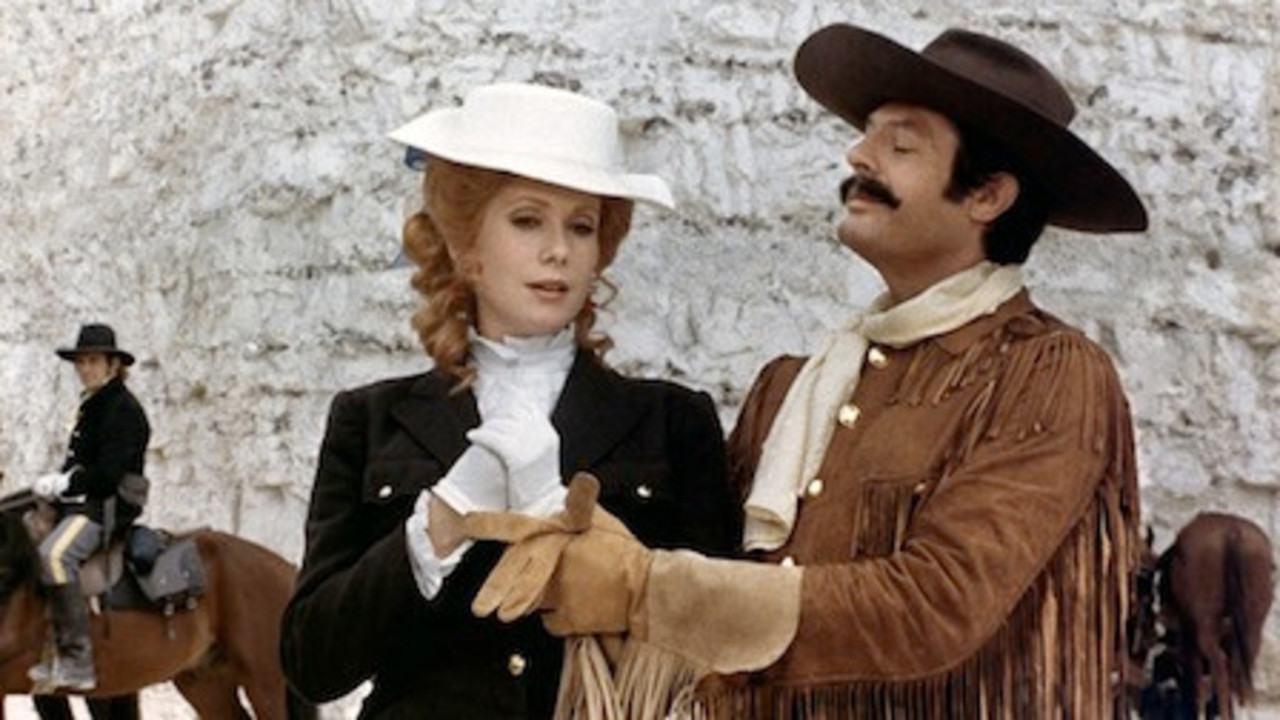 Don’t Touch the White Woman is in the tradition of French farce, extravagant, mocking, ridiculous and absurdist. It really isn’t very good, and you will miss little if you skip it, but it might give you the odd wry smile here and there.