The next screen Custer who came along was James Olson, who took the part in a Warner Bros TV adaptation of Douglas C Jones’s first novel, The Court-Martial of George Armstrong Custer, 1976, which NBC aired in December 1977. Jones specialized in ‘alternative history’, a what-might-have-been version, and this book and film imagine that Custer survived Little Bighorn and was subsequently court-martialed. 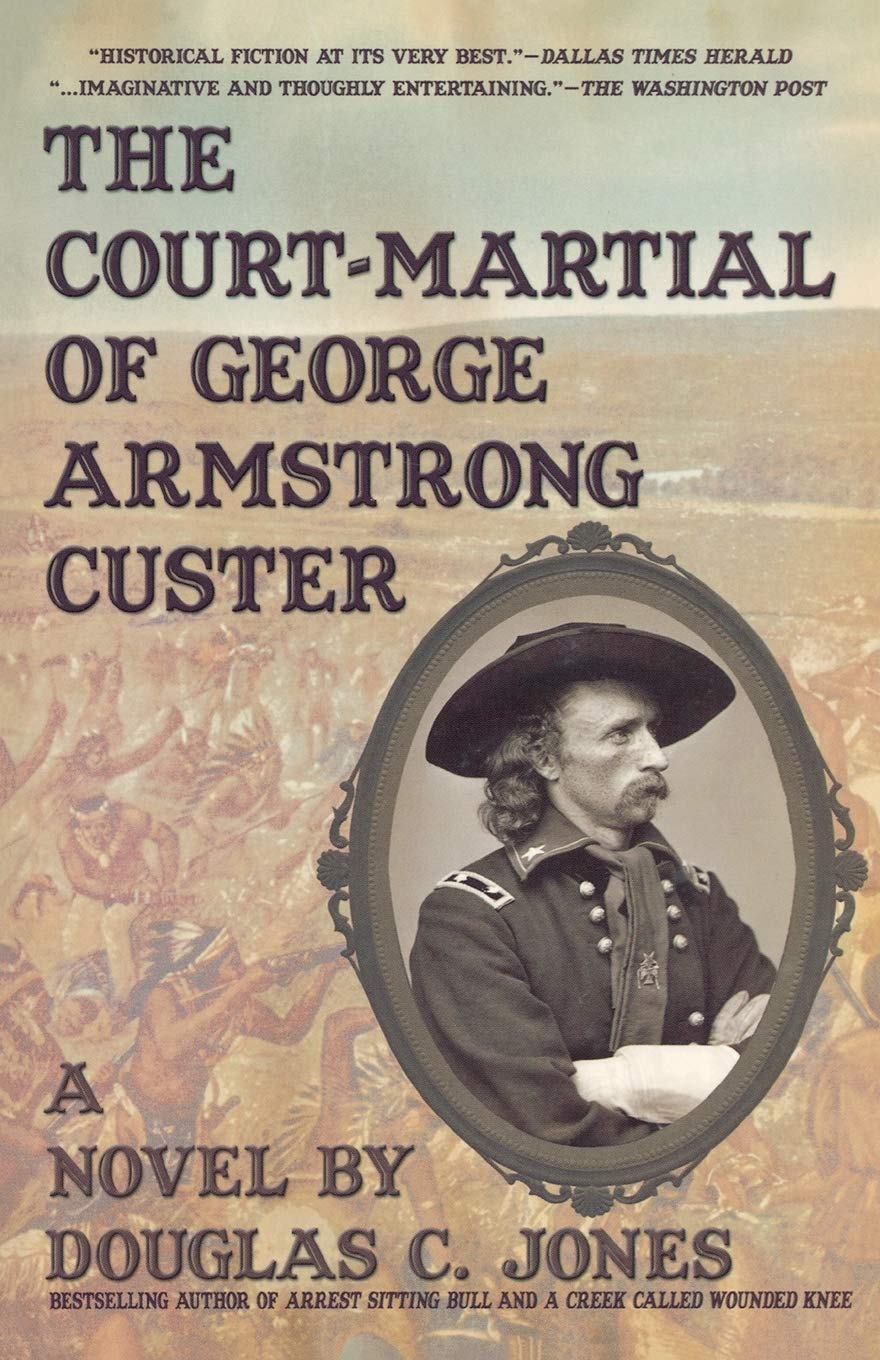 This is not such a stretch. Well, maybe the surviving part, but not the court-martial. After all, Custer had already come up before a tribunal, in 1867, when he was accused of negligence after the death of Lt Lyman Kidder and his men at the hands of Lakota and Cheyenne, and also of going AWOL, having abandoned his post to meet his wife and used soldiers under his command as an escort. He was suspended without pay for a year. Controversy and animosity accompanied Custer all his professional life and his meddling in politics in the mid-1870s certainly did not help.

Furthermore, Little Bighorn had been such a disaster that not only the army but the whole nation asked itself what could possibly have gone so wrong. There was actually an investigation, though of course without the deceased commander, when, responding to charges of cowardice and drunkenness at the battle, Major Reno demanded and was granted a court of inquiry. The court convened in Chicago in January 1879, and called as witnesses most of the surviving officers who had been in the fight. After 26 days of testimony, the presiding judge advocate concluded, “I concur with the court in its exoneration of Major Reno from the charges of cowardice which have been brought against him.” He added, “The suspicion or accusation that Gen. Custer owed his death and the destruction of his command to the failure of Major Reno, through incompetency or cowardice, to go to his relief, is considered as set to rest….”

We open the movie with corpses piled on the battlefield and we see Custer’s body, distinctly Christlike in its pose. But he breathes. Badly wounded, he survives. President Grant (Richard Dysart) is furious when he hears. “Damn! Why did he have to survive?” Grant and his senior commanders decide on a court-martial, at which Custer will be found guilty (they have already decided) and drummed out of the army. But they cook up a scheme whereby Sheridan (Nicholas Coster) will actually testify on Custer’s behalf, so as to avoid any accusation of political vendetta or scapegoating.

Like many courtroom dramas, this one is rather static, with a lot of talking. A big-screen production like, say, Sergeant Rutledge (1960) could afford many action scenes in flashback; this TV show confines itself largely to the inside of the courtroom. But it does benefit from Western heavyweight Brian Keith as Jacobson, the defense attorney and Custer family lawyer. Ken Howard plays Major Gandiner, who unwillingly prosecutes (his pleas to be excused are denied), and the reason for his reluctance will become apparent.

Custer (Olson) appears in full regalia, with his wife Elisabeth (Blythe Danner) at his side. He doesn’t seem entirely stable, mentally. No wonder, you might think.

Prosecution witnesses testify. A Captain EW Smith and a Crow scout declare that the 7th was vastly outnumbered but Cutler was heedless of that, reckoning that his force could beat any number of Indians. Major Reno, who clearly dislikes Custer intensely, says that his own battalion of 102 men had to face over a thousand braves. General Terry states baldly that Custer disobeyed orders, charging recklessly into the attack against his commander’s express wishes. Finally Sheridan himself says that the army was “misled” as to the numbers of the enemy. There were in reality probably over 8000 fighting Sioux and Cheyenne.

During a recess, an unsavory former orderly offers the prosecution some of Custer and his wife’s private letters. They are, he says, “quite saucy”, and indeed the couple’s correspondence was frank about sexual details. Major Gandiner contemptuously and haughtily refuses the offer and indeed threatens to have the purveyor arrested, but in short order the letters are published in the New York Herald, and cause great scandal. Mrs Slaughter, the Bismarck postmistress, takes the stand, and there is play on how the prosecuting attorney addresses her as Madam, with double entendre. Clearly the suggestion is that she was one of Custer’s many conquests.

We now get the strange business of the testimony by affidavit of Custer’s cook, Mary Adams, to the effect that she overheard Terry telling Custer that he was free to use his own judgment as to when and how to attack, thus negating the claim that Custer was disobeying Terry’s orders. But it is clear that this is false, because Gandiner learns from a sergeant that Mrs Adams remained with Mrs Custer at Fort Lincoln the whole time and could not have listened in on the Terry/Custer conversation at all. Gandiner is urged to put Mrs Custer on the stand: she will either have to confirm that, and discredit the evidence, or she will commit perjury. But the major won’t do that. By now we understand from certain meaningful looks between them that the major and Mrs Custer are not strangers. That explains why he was so reluctant to take the job of prosecutor.

According to Robert Utley’s biography of Custer, Cavalier in Buckskin, the Adams affidavit (1878) was long thought to be spurious, but “Now she is known to have been with Custer.” So perhaps there was truth in the testimony after all.

Custer himself is finally called to the stand but in an extraordinary piece of theater will only read a prepared statement, not answer questions, and reads, too, in a whisper that no one can hear. Basically, he refuses to give evidence. He seems to be losing it mentally.

Both attorneys give impassioned speeches of summation, urging the panel of officers to acquit or condemn Custer. It is clear to us viewers that Custer has lost. He was clearly in the wrong and he will be cashiered, without a doubt.

The final verdict is pronounced.

But the film does not end there. We see the Custers back in their hotel room. The general is now completely out of his mind, ranting and babbling, thinking he still on the battlefield. Elisabeth Custer now takes over, and summons Gandiner back from Arizona (he is now serving on the frontier, demoted to lieutenant) to act as go-between between the general and the high command. Gandiner is obliged to take back an extraordinary suggested bargain. There the movie ends, and we are left to guess if the offer is taken up.

OK, yes, all this is highly improbable. But that’s the thing about alternative history, and if the scenario is plausible enough, the book and film do work. This one just about does, within its limits, and personally I found it 74 minutes quite well spent. Olson was not much of an actor, which was a weakness, but Keith was good, and the curious premise carries you along well enough. You could give it a go (it’s on YouTube if you’re interested).

Next time it’s 1990s Custer, as we take a look at Son of the Morning Star.