We got the occasional quite negative portrayal of Custer in the 1950s and 60s. Douglas Kennedy’s Custer in Sitting Bull (1954), for example, was arrogant and heedless of Dale Robertson’s wise advice, and in The Great Sioux Massacre (1965) Philip Carey’s version is cynically anti-Indian and of uncertain equilibrium mentally, at least later in the story. But these were mere hints of what was to come once the high tide of the revisionist Western hit in the early 1970s. We have already seen on this blog how oaters demolished former heroes like Wyatt Earp and Billy the Kid in pictures such as Doc (1971) and Dirty Little Billy (1972). In 1976 it would be that Western icon Buffalo Bill’s turn to be debunked by Robert Altman in Buffalo Bill and the Indians. It was inevitable that Custer would come under revisionist fire too. The US Cavalry had been, traditionally, such heroes, always arriving, bugles blowing, at the last moment, to save wagon trains, forts and besieged settlers; clearly they were going to be recast as villains. Soldier Blue, a rather nasty film actually, released six months before Little Big Man but shot a few months after filming on LBM, did a truly massive demolition job on the army, transposing the My Lai massacre in Vietnam to the American West. Little Big Man did that too, having Custer’s attack on the Washita represent My Lai. It was a facile comparison.

Arthur Penn had directed the big-hit gangster flick Bonnie and Clyde in 1967. Westernwise, he made the mannered and arty Billy the Kid picture The Left-Handed Gun back in 1958 (click link for our review), with a method-acting and over-the-top Paul Newman as Billy, but that had been his only foray into the genre. Later he would make the equally mannered and really rather bad The Missouri Breaks, with an even more OTT (in fact a buffoon) Marlon Brando, to complete a trio of features he made in a distinctly undistinguished Western CV. Dennis Schwartz says of Little Big Man, perceptively, I think, “Overall the gimmicky film has a phony look to it as Penn seems to have little feel for the Western genre.” 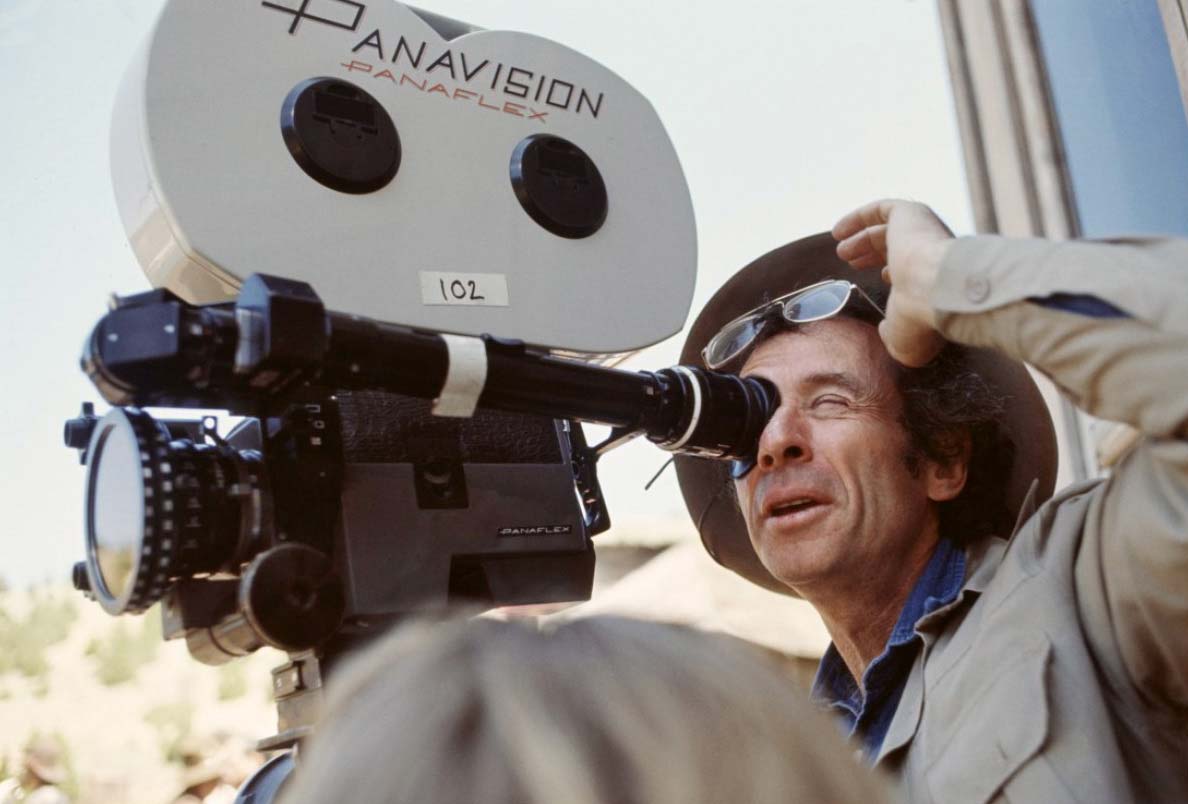 JAW reader Stereosteve commented, “I remember this picture as being immensely popular upon its initial release (it was given the ‘prestige’ slow rollout marketing strategy), and having long legs in a sub run that seemed to last longer than a year.” And indeed, there was much hullabaloo when Little Big Man came out (it was premièred on December 14, 1970 in New York). Star Dustin Hoffman was big news, having been The Graduate in 1967 and Ratso in Midnight Cowboy in 1969. Co-star Faye Dunaway, Bonnie in 1967 and the glam insurance agent in The Thomas Crown Affair in ’68, was also a hot property. But both were new to our noble genre.

The superb picaresque Western novel Little Big Man by Thomas Berger (our next review, so come back soon) which had come out in 1964 was now, after an indifferent sales start and some negative reviews, a best-seller (True West reports a poll which elevated it to America’s favorite Western novel) and garnered prizes from the National Institute of Arts and Letters and a Western Heritage Award. Calder Willingham, who wrote The Graduate for Mike Nichols, adapted it for the screenplay in 1970.

So the picture was almost bound to be big news. And indeed, the film critics were full of praise. Furthermore, the movie was the ninth-biggest grosser of the year and top Western (only Wayne’s Big Jake came anywhere near, making $7.5m against Little Big Man’s $17m).

Penn’s film is an “important” Western in the history of the genre in many ways, and some people think it is great. For the present writer (that’s me) it certainly has merits but is a seriously flawed picture with too many Penn mannerisms. Brian Garfield, in his fine guide Western Films, calls the movie “arty, pretentious and self-conscious.” And Brian was rarely wrong.The book is one of the golden handful of the best ever Western novels. Henry Miller called it “an epic, such as Mark Twain might have given us, a delicious, crazy, panorama enlargement” and Larry McMurtry calls it “an American masterpiece, up there with Hemingway and Twain.” But unfortunately Penn and Willingham changed it radically, in tone more than anything. They played it for belly-laughs much of the time and the film becomes a burlesque, almost a parody of a Western – dangerous territory, pards. Successful comedy Westerns, of which there have some splendid ones, are not mocking parodies; they are affectionate digs. Good comedy Westerns make you smile warmly; bad ones border on the sacrilegious. A good example of this distortion is the book’s moving death of Old Lodge Skins, who fails to die in the movie and walks back down to his tepee. He is made to look ridiculous.

The film is certainly visually fine and the wide-screen photography by Harry Stradling Jr of Montana and Alberta locations is extremely well done. A special mention ought also to go to Dick Smith, who made Dustin Hoffmann up to be 121 years old in an old people’s home and to Hoffmann himself who acted that part superbly. Hoffmann is another method actor and it is said that he screamed himself hoarse in his dressing room before the take so that his voice would be croaky and quavering. The historian, Snell, who tape-records his reminiscences, however, played by William Hickey, is far too nerdy, a caricature (he was also a bit silly in the book). 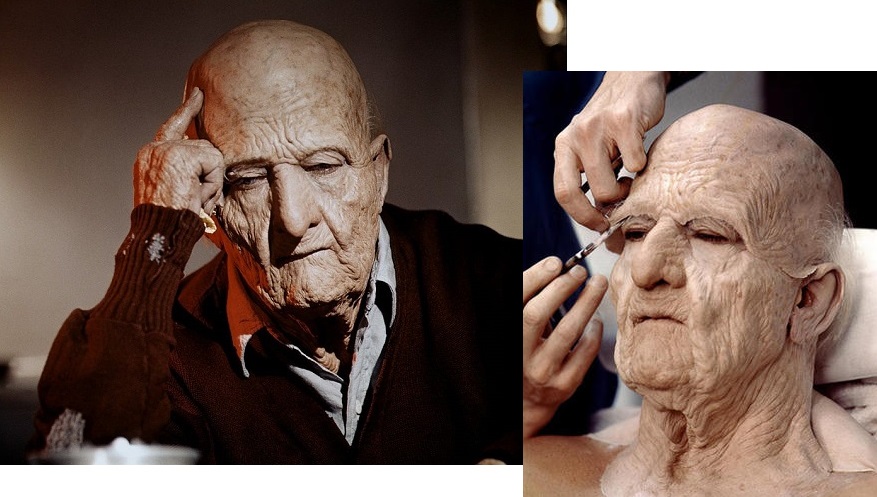 I liked the John Hammond music, bluesy and folksy – anachronistic, perhaps, but it’s rare to find a Western score that isn’t (and what’s authentic about the greatest score of all, Elmer Bernstein’s The Magnificent Seven?)

The film is a typical Custer one in one way: most movies featuring the general did not have him as the central character. Custer of the West (1967) and They Died With Their Boots On (1941) were exceptions. Usually you got another hero, a scout maybe, who miraculously survived Little Bighorn. This was true even of pictures with a title that might lead you to think they were all about Custer, such as Custer’s Last Stand (1936) or With General Custer at Little Big Horn (1926). But Little Big Man is a classic one in that it tells of a certain Jack Crabb (Hoffman) who, in extreme old age, recounts his adventures in the old West, which included surviving Custer’s last stand.

He becomes a Cheyenne 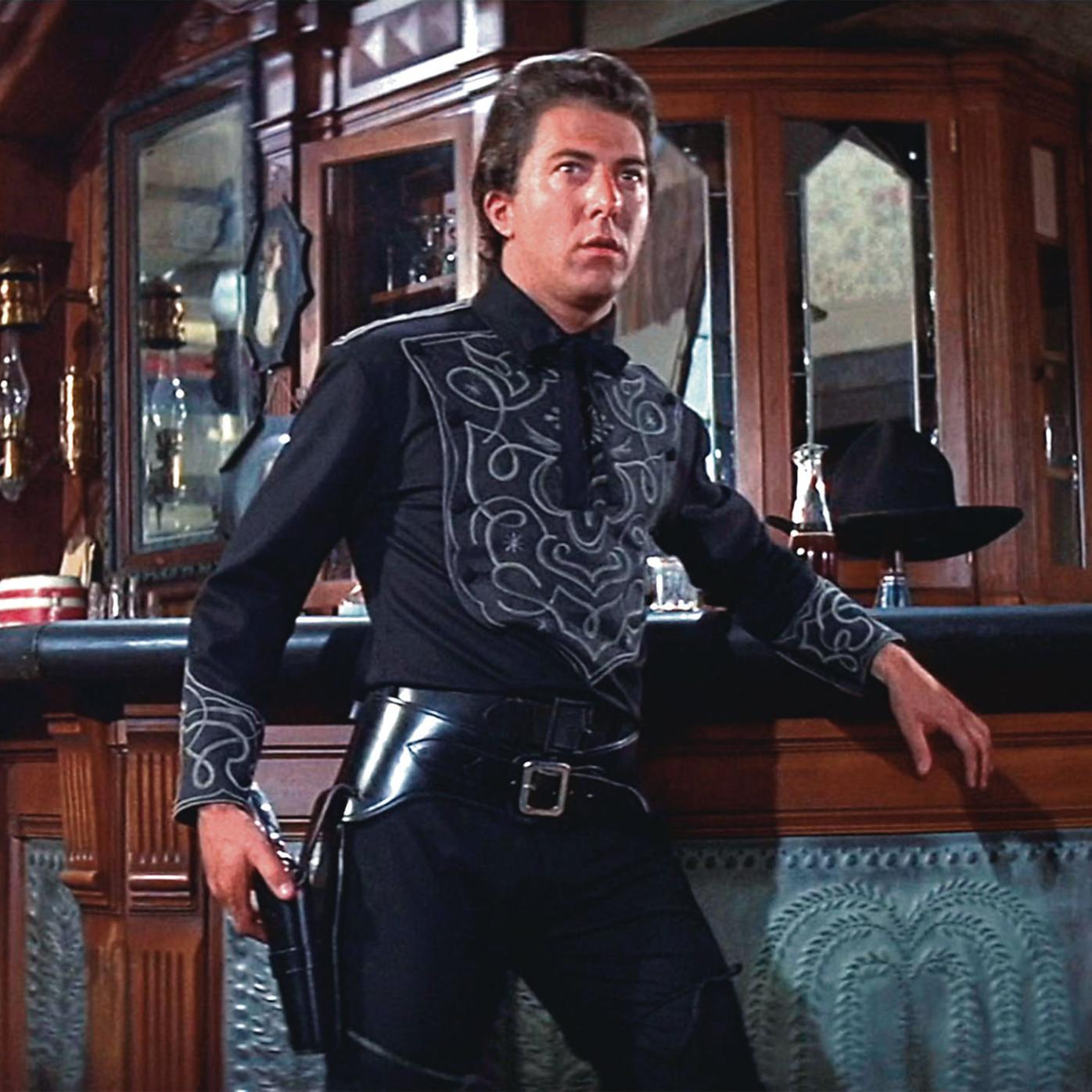 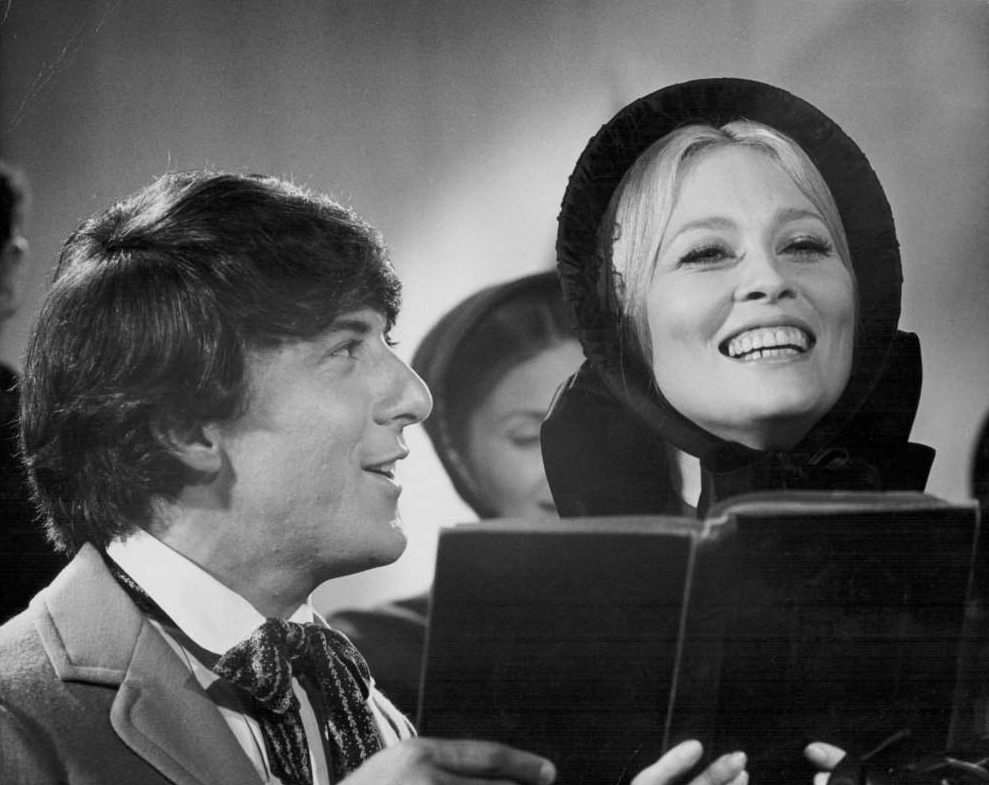 and a hymn singer

Crabb is telling a yarn, and has been called the Zelig of the West. How much is true and how much fantasy is left to the viewer to decide. As he tells it, he was an intimate of General Custer, Wyatt Earp and Wild Bill Hickok (Jeff Corey, wonderful), and wandered the West at various times as a medicine show huckster, a gunfighter and an adopted Cheyenne. It is here with the Cheyenne that he gets the name Little Big Man, though he is nothing to do with the real Little Big Man, Wičháša Tȟáŋkala, or Charging Bear, the Lakota rival of Crazy Horse who was present at Crazy Horse’s death (he said that Crazy Horse stabbed himself in the back). 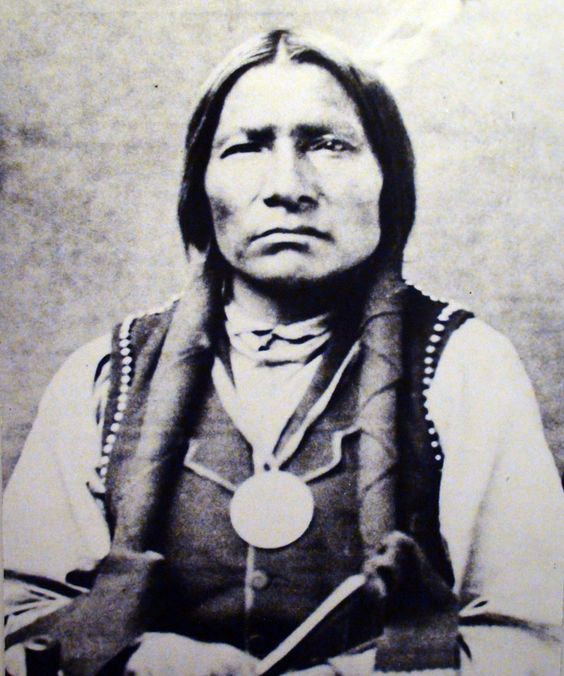 Custer is played by comic actor Richard Mulligan as close to insane. He is a ranting megalomaniac dandy, unbelievably vain, and militarily completely foolish. This wasn’t just debunking; this Custer was cartoonish. The book’s Jack Crabb has a much more subtle relationship with Custer and nuanced opinion of him, ending with a final grudging respect. The film replaces that with the silly business of Jack’s convoluted advice as to whether Custer should attack. The episode of the Soda Pop Kid, too, is invented for the movie for ‘humorous’ effect and largely fails. In the novel Hickok teaches Jack to shoot but then goes off to Deadwood without Jack and is never seen again (though this account is altered in Berger’s 1999 sequel, The Return of Little Big Man).

There is much broader humor in the movie’s sub-plot of Mrs Louise Pendrake, later Lulu (Dunaway). In the book Jack does not rediscover her in a whore house, nor would he; it was out of character.

However, one improvement in the film over the novel, I thought, was the Dickensian Mr Merriweather (Martin Balsam), who has lost an appendage each time we meet him. He was a hugely colorful character who only appears once, briefly, in the book. 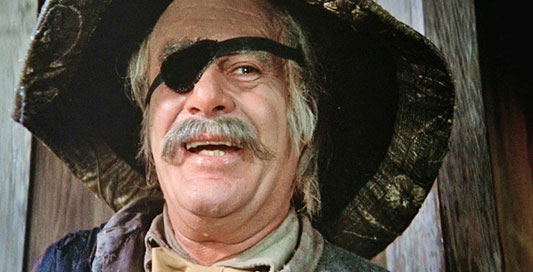 There is an almost folksy tone to Little Big Man. Though revisionist, it doesn’t take itself too seriously, and that’s a plus point. As Roger Ebert said, “There’s no stridency, no preaching, no deep-voiced narrators making sure we got the point of the last massacre”. Variety wondered, “Might it be a serious attempt to right some unretrievable [sic] wrong via gallows humor which avoids the polemics?”Chief Dan George as the central Indian character, the Cheyenne leader Old Lodge Skins, is superb, and this role, for which he was Oscar-nominated, and his part in The Outlaw Josey Wales six years later mark him out as an outstanding Western actor. Had Marlon Brando made the movie (he had the option at one stage but couldn’t get funding after the disaster of Mutiny on the Bounty) he would, apparently, have played Old Lodge Skins himself. Thank goodness that never happened. Brando would have hammed it up unmercifully (he was hopeless in Westerns) and we would have missed Dan George. It is said that Penn even wanted Laurence Olivier in the part. Amazing. I also think it’s good that Penn had his Indians speak standard English. There’s no Ug-speak, as I call it, “Me big chief, you white eyes” nonsense. 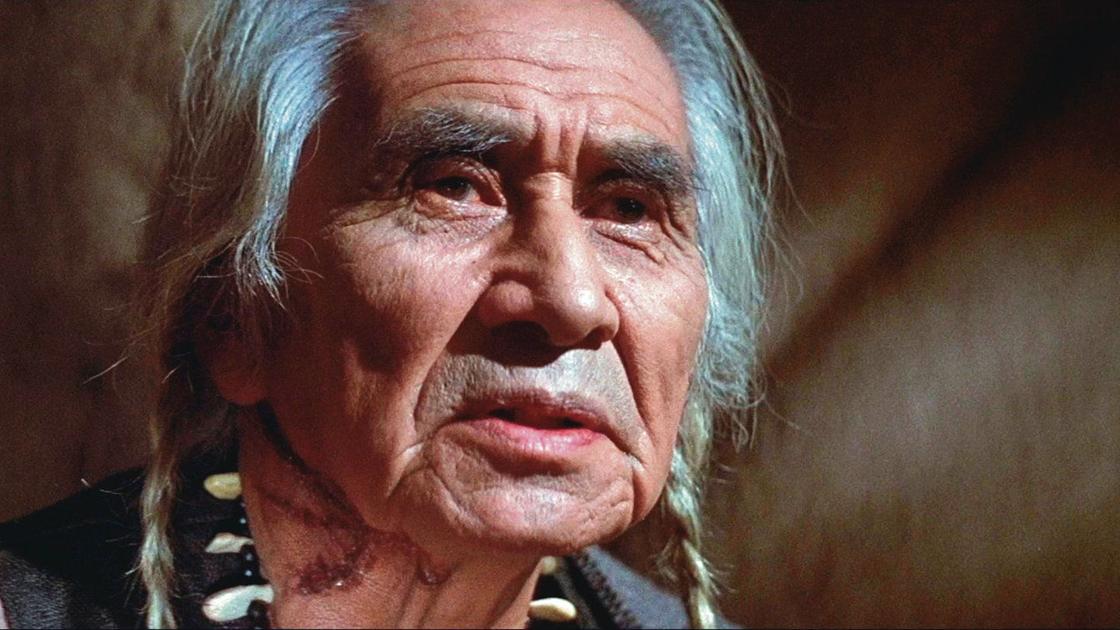 The Cheyenne’s use of the term human beings to describe themselves, though clearly done for comic effect, implying that non-Cheyenne are not human beings, is an interesting one. In fact many American Indian languages use a term to describe themselves that may be translated as “the people”. Apaches, for example, refer to themselves as Nde or Ndee, people, while apache is a Zuni word for enemy. Similarly, Comanche is an Ute word for a foe or one who wants to fight me all the time, while they call themselves Numinu, the people.

Thomas Berger wrote to Allen Barra, “You and I are of one mind concerning the Little Big Man movie, and I was appalled by the confusion of the Washita attack with My Lai (especially since the historical example of Sand Creek was available, though, without Custer). As to [Richard] Mulligan’s two portrayals of the general, I greatly prefer that in Teachers, but I have always been on the friendliest terms with Arthur Penn and the late Richard (the latter starred in a play of mine at the Berkshire Theatre Festival in 1970) and my career owes a lot to the success of the motion picture, so I have avoided any public animadversions on the film, which of course has many strengths, most of them, appropriately, visual.”

This big, famous Western movie with top stars went a long way to redress the wrongs of years of Hollywood misrepresentation of the American Indian. It also contains a lot of humor and is a colorful, vivid tale, if stretching the bounds of plausibility and often descending into low farce. You should probably watch it, at least once. But you would do much better to read the book.