Like many people, I suspect, I saw the 1970 movie Little Big Man (click the link for our review of that) before I read the source novel by Thomas Berger. This was partly because the book did not make great waves when it came out in 1964, when anyway I was only 16. It managed to go from hardback to paperback but the New York Times panned it and sales were modest. Until the film came out it remained the preserve of aficionados like Henry Miller, Janis Joplin and Marlon Brando (who optioned the movie rights but couldn’t get financing after his disastrous Mutiny on the Bounty). Miller called it “an epic, such as Mark Twain might have given us, a delicious, crazy, panorama enlargement” and Larry McMurtry calls it “an American masterpiece, up there with Hemingway and Twain.”

When I did read it, however, I realized that it was one of the great American novels. The film, which I found amusing in parts but which I basically disliked, had not done justice to the book at all. The novel is one of the great works of picaresque fiction; the movie turned picaresque into burlesque. 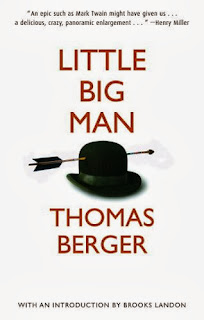 You probably know the story: it is 1953. Jack Crabb, born 1842, is 111 years old and describes his life, tape recorder running, to a gullible and very wet Ralph Fielding Snell, who transcribes and publishes the account ten years later. Jack tells, in his earthy vernacular, how his family were killed by Cheyenne braves on a wagon train going West and how he grew up with the Indians. He later rejoins the white world and periodically finds himself back with the Cheyenne, notably at the time of Custer’s murderous attack on the Washita in 1868. He is, he says, the lone white survivor of Custer’s last stand in 1876, which he describes in detail.

You can read Little Big Man on two levels: firstly as a hugely entertaining autobiography by either the most interesting figure to have survived the nineteenth century frontier or a liar of Münchhausen-ish proportions (whichever you choose), or, secondly, as a camouflaged but nevertheless deeply-researched revisionist history of the Wild West.

We have to remember that in 1964 the version of the West that was the most widely accepted was still the one of Hollywood, pulp Western novels and magazines, and Gunsmoke on TV. Indians were fearsome savages, lightning-fast gunfighters walked down Main Street for quick-draw showdowns at noon and stagecoaches were robbed by outlaws on every run. 1964 was the year of movie oaters such as Raoul Walsh’s last, A Distant Trumpet, a sub-Fordian cavalry Western, and Rio Conchos, Fox’s big, brash, commercial cowboy film about running guns to the Indians (the most heinous crime there was).

But revisionism was in the air. The sixties were the time of Vietnam, burgeoning feminism, civil rights and the American Indian Movement. It was a time of what Arthur Schlesinger called “skeptical reassessments of supposedly sacred assumptions”. Little Big Man’s publication date of 1964 was also the year of John Ford’s last movie, Cheyenne Autumn, which, while it perpetuated many of the cowboy clichés, did try to do something to redress the shameful balance of the past and show the Cheyenne (and by extension American Indians generally) in a more positive light and as victims more than aggressors. Pro-Indian Westerns had been around at least since Broken Arrow in 1950 and even before (many early silent movies were surprisingly pro-Indian) but now they were becoming the orthodoxy.

Nevertheless, when the novel Little Big Man came out, it was still mainstream for George Armstrong Custer to be thought of as the brave, tragic hero whose troops had been slaughtered by the savage redskins, the 7th Cavalry of the 1896 Anheuser-Busch picture Custer’s Last Fight, so a book which portrayed Custer as reckless, arrogant, vain, even insane, was quite a shock. 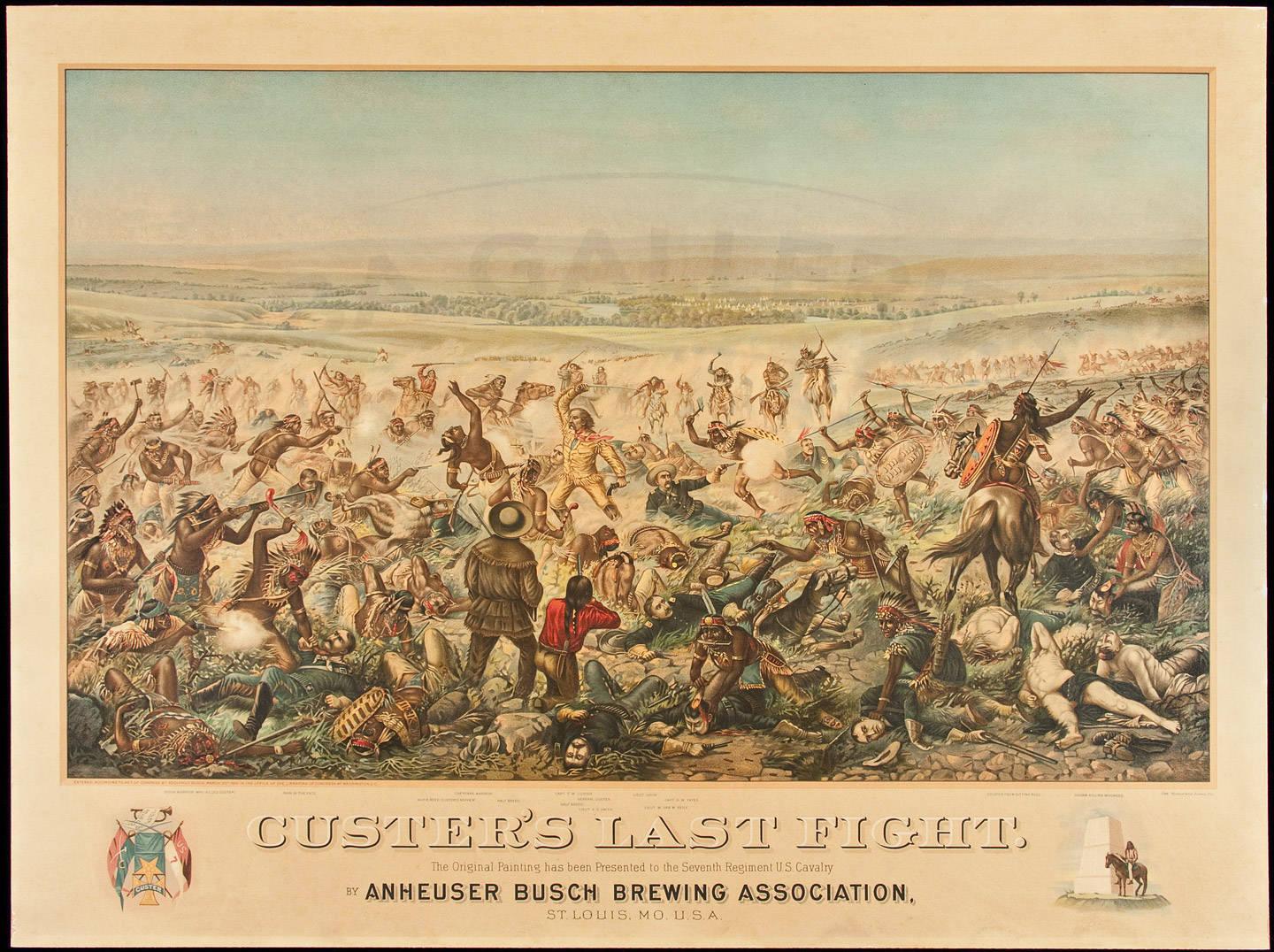 By the time the sequel The Return of Little Big Man was published, however, a generation later, revisionism had become the mainstream. People had seen movies in which the US Cavalry did not arrive at the last moment to save beleaguered homesteaders or wagon-trainers but rather slaughtered innocent women and children in Indian villages. They had seen Soldier Blue and read Bury My Heart at Wounded Knee. Much of the paraphernalia of the Wild West had been debunked. Those quick-draw Main Street showdowns were now risible. So the book lost some of its shock and impact. It was ‘merely’ an enjoyable read for fans of Little Big Man who wanted to know what happened to Jack Crabb after Little Bighorn.

There is a slight air of cheat about the sequel because Jack died at the end of Little Big Man but is resurrected in the Return, Sherlock Holmes-like. That a 111-year-old in a home should fake his own death is a little far-fetched. But then the whole thing is so wildly far-fetched that if you swallowed Little Big Man you will have no problem at all with his Return. Jack had told us in volume 1 that after Wild Bill Hickok had taught him how to shoot well enough to split dimes placed on edge from twenty paces, Bill went off to Deadwood and Jack never saw him again. Jack tells us in the sequel, however, that this was a lie, and proceeds to describe Hickok’s death at the hands of Jack McCall, which he, Jack, witnessed. Admitting to a lie puts Jack on thin ice for the credibility of the rest of his former tale but then that’s where he has been skating, so skillfully, for the whole 440 pages of Little Big Man…

And interestingly, while the sequel did deal more with Bat Masterson and Wyatt Earp than the first book did, the majority of it is devoted to Jack’s participation in Buffalo Bill’s Wild West. Jack prefers, having seen bloodshed and death in all its unpleasant reality, to live in the make-believe West of the traveling circus. ”After much experience in the actual world,” Jack confesses, ”I preferred the imaginary.” Well, Jack, it is distinctly possible that all of your Old West fell into the category of imaginary, but then I guess you knew that, and knew that we knew. 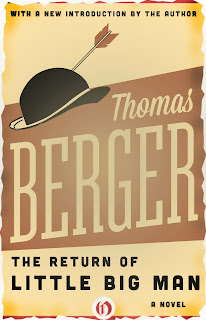 In Jack’s amusing old-timerish asides, Berger has actually something thought-provoking to say on this imaginary West (the one, in fact, the writer and readers of this blog may be said to inhabit) and on the general nature of myth and reality. What was the ‘real’ West? When we revise revisionism, will it be any truer? ”I come up with the idea,” Jack says at one point, ”that time belongs to everybody and everything, and nobody and nothing can lay claim to any part of it exclusively, so if you talk about the past as though there was just one version of it that everybody agrees on, you might be seen as stealing the spirit of others, something which the Cheyenne always had a taboo against.” That’s actually interesting, perceptive and wise. Questions of identity and alienation are also posed. Jack never really feels comfortable in himself: as he says, when with the Cheyenne he feels white and when with the whites, feels Cheyenne. “God knows,” he says, “I thought enough about it and kept telling myself I was basically an Indian, just as when among Indians I kept seeing how I was really white to the core.”

Of course both books depend, as picaresque novels often do, on coincidences so outrageous that the reader either just chuckles or chucks the book away with a harrumph. Jack is constantly running into acquaintances in the most unlikely places and most convenient times, and he just happens to have crossed paths with almost every notable figure of American frontier history. Jack happens to be on Fremont Street, Tombstone near the OK Corral at 3:00 p.m. on Wednesday, October 26, 1881. When Sitting Bull is murdered at his cabin in 1890, guess who’s with him? While waiting in line to see Thomas Edison’s kinetoscope at the Chicago World Fair in 1893, he gets chatting to the fellow behind him and they talk about the possibility of horseless carriages. It is, of course, a young Henry Ford. It would have to be.

But for all his amusing old-boy narrative, Jack isn’t really the picaro. Hickok is the picaro, and Earp, and Buffalo Bill and Sitting Bull and all the others. Jack is just present, ubiquitously it must be admitted, in order to be the straight guy. When he does contribute it’s as a Shakespearean fool. It really is masterfully done by Berger.

Stylistically the books read like Mark Twain in their folksy humor and wry wisdom. However much your highbrow eyebrow is raised while reading, you can’t help being genuinely moved, dammit, when Jack’s dog Pard dies or when Queen Victoria stands to salute the American flag. These are actually great novels in any terms.In one way the language and the ‘voice’ of Jack Crabb are very convincing. The frontier vernacular is cleverly used – they was, commenced to, knowed, and so on. Furthermore, he is so convincingly accurate about details and firearms and Cheyenne customs and all the rest. But in another way, no one, however gifted a story teller, could speak off the cuff into a microphone such a meticulously structured narrative, transcribing into such beautifully paragraphed prose. And how come Jack speaks in such an unsophisticated, colloquial way yet reports what Custer said in immaculate, grammatically perfect English? Still, let’s put that down to Ralph Snell’s editing, shall we?

On the last page of The Return of Little Big Man Mr Berger teasingly offered us a possible further volume in the adventures of Jack Crabb, to include the early motion pictures (you can bet Jack was involved with them), the Klondike gold rush (no doubt Jack palled up with Jack London and Charlie Chaplin) and the Spanish-American War (Jack with Teddy at San Juan Hill). But sadly Mr Berger died aged 90 in 2014, so we shall hear no more tall tales from the 150-year-old, or whatever he would have been.