After big-screen appearances in the 1960s in The Great Sioux Massacre, The Plainsman and Custer of the West, click links for our reviews, George Armstrong Custer migrated to the small screen in the fall of 1967, when Wayne Maunder was cast as the soldier in ABC’s 60-minute color show Custer, aka The Legend of Custer. Two of the episodes were later cobbled together to make a ‘film’, Crazy Horse and Custer: The Untold Story. There was a reason the story was untold: it was totally fictional. Custer and Crazy Horse (Michael Dante) are captured by a tribe of Blackfoot and forced to work together to escape and survive a dangerous journey back to civilization. Yeah, right, that definitely happened. 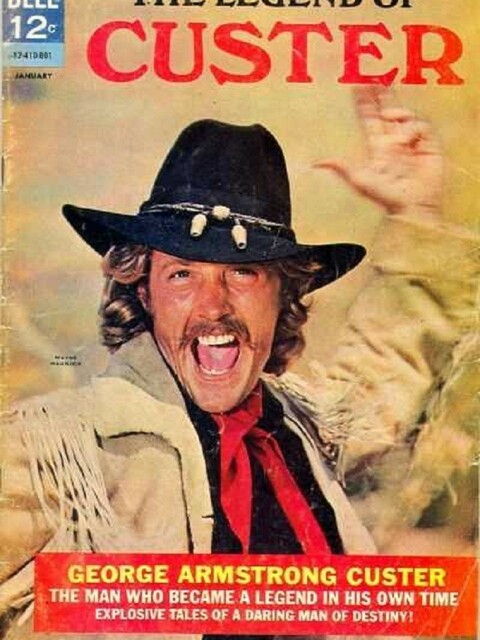 The Legend of Custer indeed. Of course many screen Custers had erred and strayed from historical truth. That had been going on since the early 1900s. But rarely had movie-makers gone quite so far. Custer was wildly imaginary. An on-screen viewer information card read “Tonight’s episode has been a fictional drama.” Just in case we hadn’t guessed.

The idea was by Larry Cohen and there were loads of writers, including Cohen, Christian Nyby, Samuel A Peeples, David Weisbart and Shimon Wincelberg. Full marks to them for inventiveness anyway.

Among the directors were Sam Wanamaker and Leo Penn, Chris and Sean’s dad.

Maunder’s Custer (who is unmarried) is an out-and-out goody. No revisionism here. That was part of the program’s downfall. A concerted protest headed by the Tribal Indians Land Rights Association managed to get the series canceled after 17 episodes under the FCC fairness doctrine. So this Custer never got to make his last stand. The show wasn’t doing too well in any case, getting some pretty bad reviews and failing to compete with NBC’s The Virginian. ABC probably regretted replacing the popular Time Tunnel with this dud.

Of the regular cast, Robert F Simon (one of the baddies in Chief Crazy Horse) played Custer’s commanding officer, General Terry, who disapproved of Custer’s long hair and much of his methodology of fighting Indians. Slim Pickens was the scout California Joe Milner.

It had some very good guest stars – Rory Calhoun, Philip Carey, Darren McGavin, Dub Taylor and James Whitmore, for example. But they couldn’t save it. The plots were preposterous.

If you’re really determined, Custer: The Complete Series (Collector’s Edition) was released on DVD in June 2016.