Back in 2017 when it came out, I reviewed a Netflix Western, Godless, on my old blog, and was complimentary about it. I’ve just watched the seven-part series again and I must say it’s gone even farther up in my estimation. It’s still available on Netflix (at least here in France where I live) and if you are a subscriber and haven’t seen it yet, I recommend it.

It’s a ‘proper’ Western, set in Colorado and New Mexico in the 1880s, and it opens with an aged US marshal with a small posse riding in on the aftermath of a truly terrible massacre in Creede. A small child hanged from a telegraph pole brings the old lawman to his knees. We will at length discover the author of this foul deed, outlaw chief, the graybeard Frank Griffin, superbly played by Jeff Daniels. The role of the marshal, grizzled and mustached in a Sam Elliott kind of way, is also brilliantly handled by Sam Waterston. In fact all the acting is noticeably good.

We don’t get to know this right away, of course because in that modern (or is it post-modern, I never really know) way of motion pictures these days the facts are dealt out parsimoniously, bit by bit. That’s half the fun, I suppose, piecing the crumbs of info together to form, well, I’m not quite sure what assembled crumbs would form so I think I’ll abandon this metaphor.

The story, we eventually learn, concerns Roy Goode (once again well played, by Jack O’Connell), an adopted son of Griffin who has deserted the band, taking ill-gotten loot with him, upon which the man who considers himself his father swears to wreak vengeance on the young man of a particularly painful and terminal kind. Goode fetches up, wounded in the throat, on a ranch whose rather trigger-happy owner, Alice Fletcher (Michelle Dockery: yup, very good) proceeds to wound him again, for not speaking, which is a bit harsh.

But at least she then has the decency to heal him, with the aid of her Paiute mother-in-law, played by the actor who might take the cake as the best of the whole cast, Tantoo Cardinal, whom you may well remember from Dances with Wolves (and who is also in another good Netflix show, Frontier). Ms Cardinal has little to say, and most of that with subtitles, but she is all the more powerful for it. It’s a magnificent performance.

I also liked Alice’s son, well more than half Paiute himself, Truckee (Samuel Marty), an uncertain teenager who gradually comes to see Goode as a father figure. The alternating bolshieness and tentativeness is very well done, though I suppose as a teenage boy he was pretty well qualified for that…

There are many other characters, of course, but the nub of the plot is that, and how the characters will face the inevitable showdown as Griffin and his murderous thugs descend on the town of La Belle to wreak their bloody revenge.

La Belle is a mining town but nearly all the men have perished in a pit accident (there is a curious idyllic scene of marital and urban bliss as the miners go off to work wreathed in smiles and bathing in the love of their families, never to return). The result is a very female community, and the sisters sure are doing it for themselves. Thus it is a very female, not to say feminist Western. There are also lesbian affairs that teeter on the brink of, but probably do not fall over into salaciousness.

Chief among the townswomen is a veritable Western Amazon, Mary Agnes (Merritt Wever), the butch sister of the sheriff. She effectively takes over as town boss while her brother is away hunting the outlaws. She comes across as a hostile and dismissive person with a deep sadness underneath but I guess in a community like that it’s not surprising. Once again, the part is very well handled by the actor.

This sheriff, her brother Bill McNue (Scoot McNairy) is losing his sight, not an ideal situation for a man to be in who depends on his firearm, though rather implausibly all is made well when he purchases some spectacles from a casual encounter with a passer-by for 25 cents and these eyeglasses miraculously cure both long- and short-sightedness, throwing everything into crystal-clear focus, even when one the lenses, Piggy-like, is cracked. Once the US marshal is out of the picture, and he regrettably is, this humble town lawman will bear the responsibility for bringing the evil Griffin and his gang to justice. Luckily he will be helped by his manly sis, by Roy Goode and Alice, and by sundry other allies. It turns out that the majority of them can shoot durned well.

While the sheriff is away, a mining company, eying up the possibilities, puts in its own men as the law and to my delight they are led by Butler, or at least that is how I think of him. Butler (Kim Coates) is the especially bad badman in Open Range, you will doubtless recall, and he does something similar here. He is called Logan here but I’m sure it’s Butler. Probably he changed his name when he moved on to the Open Range town. He’s splendid. Of course, corporate greed and ruthlessness are standard elements of the Western, almost a cliché, but it’s very well done here. Naturally, when Griffin and his band descend on La Belle, ‘Sheriff’ Logan is long gone – purportedly going for more men but in reality going back to larceny.

In the sheriff’s absence the town is in the hands of the skinny, gauche, naïve deputy, the stripling Whitey (Thomas Brodie-Sangster, very good) who fancies himself as a gun-twirling quick-draw artist and who, though a stranger to soap and water, has fallen for a girl in the local African-American community of Blackdom.

I also liked the scurrilous newspaperman AT Grigg (Jeremy Bobb), happily exaggerating, embroidering or even plain inventing the ‘facts’ for his rag.

Actually, other Westerns than Open Range are ‘quoted’ too, or at least I don’t think it’s too fanciful to say so. We get, for example, a very Django-like scene as a coffin is hauled into a graveyard; there’s an up-over-the-roof shot revealing not a town but graves, reminiscent of DP Tonino Delli Colli’s for Leone in Once Upon a Time in the West; there’s a The Searchers-like moment as Roy Goode rides down a snowy hillside like John Wayne; there’s even a John Ford doorway. The fact that you aren’t certain if you are making it up shows the subtlety of the references but then you think, no, I’m sure, that’s a Django ref alright. I picked these quotations up on second viewing, and the show repays a re-watch.

As the title suggests, the film has a secular, almost anti-clerical tinge to it. Outlaw chief Griffin is supposedly a preacher (though if ever formally ordained as such is highly unlikely) and his purple shirt gives him an episcopal appearance but he is as far from a peace-loving Christian as you could possibly get. In one scene he rides his horse into the church, while singing Nearer My God to Thee and then sermonizes the congregation. He makes clear that he himself is the nearest thing to God in this country, and he warns the congregation solemnly: anyone who protects Roy Goode will suffer as Jesus did. He is one of those men who has unilaterally assigned to himself godlike powers, in the most arrogant and bullying way possible.

The church is being built by the women, in pants or with their skirts hitched up, and on the one hand this is a nod to the Western trope of the women being the civilizing element of these communities, being churchgoers and schoolma’ams and favoring temperance and so on, while the men are out gunslinging, cattle droving or ridin’ the range. But on the other hand the church remains an unfinished skeleton and seems an empty hope. A pastor is promised but he has apparently strayed off the straight and narrow on the way there and they must shift for themselves. When finally he does arrive, too late, at the funerals of those fallen in the bloodbath, he spouts platitudes. Certainly Mary Agnes gives him short shrift, though you can see some of the more elderly and/or gullible women nodding hopefully at the clergyman’s triteness.

It’s all very well done, and full marks to writer/director Scott Frank and producer Steven Soderbergh. Mr Frank apparently worked on the screenplays of Minority Report and The Wolverine, not pictures I have seen (they aren’t Westerns) though they are said to be good. Although Godless is his only Western, he clearly understands (and, if the references are true, loves) the genre.

Slowness of plot development and pacing is almost a virtue in this picture. Only outfits like Netflix, HBO and the like can do that now. Whereas in the old days big-screen features gave us scope and grandeur while small TV screens churned out low-budget studio-set Westerns, now the tables are turned and it’s TV that provides us with the large-scale, even epic pictures, and many of us have big flat-screen TVs to watch them on.

The showdown, with its long build-up, is pretty classic and there’s a Magnificent Seven vibe as the place prepares for the coming onslaught, with Griffin cast as the Calvera figure – only scarier.

Visually, the picture is outstanding. Steven Meizler was the cinematographer. He had also worked on Minority Report, I read, though again this is his only Western. But he captures the magic of the New Mexico locations. It is true, of course, that the American Southwest is the most beautiful part of the world and New Mexico is the most beautiful part of the Southwest (I just need to check out a couple of other places in Asia and Europe but I’m pretty sure I’m right), and with that wonderful pink light even I can take good photographs there but Mr Meizler’s photography is particularly and noticeably fine.

I even liked the ending. We who have seen Yuma, The Tin Star, Hondo, and any number of other Westerns, confidently expect the widow, the young son and the newcomer gunman to bond, form a family unit and set off for California to start a new life, in the final shot. They don’t.

I would go so far as to say that Godless is the very model of what a contemporary TV Western should be, combining familiar tropes with new ideas, making an engaging and thoroughly enjoyable watch. 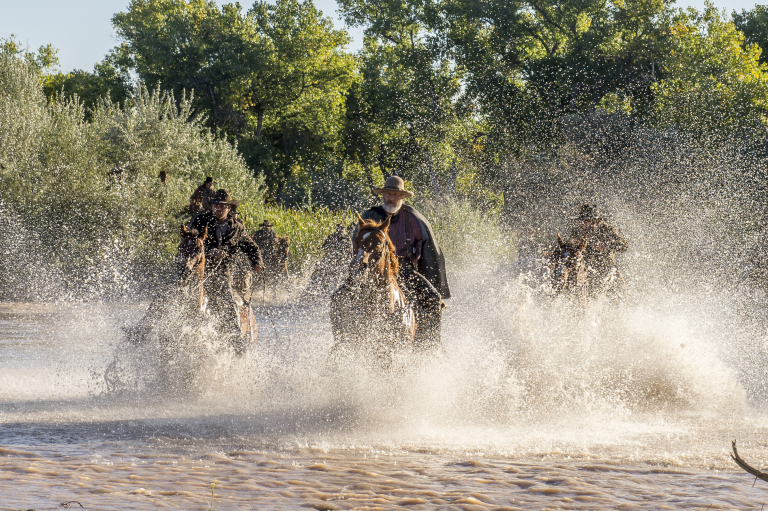