An article in True West magazine that reader Jean-Marie drew my attention to (here if you want) looked at the Westerns that came out in 2021 and among them it voted as “Best 2021 Western to Stream” Lionsgate’s Catch the Bullet. So I thought it would be rude not to watch it. 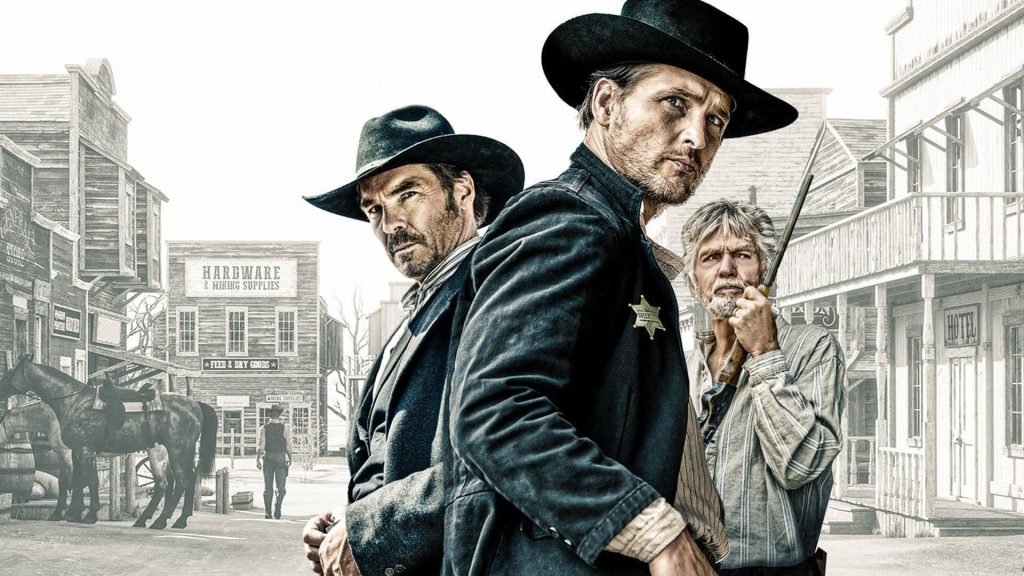 Well, if Catch the Bullet is the best Western of the year to stream, I fear the competition can’t have been that strong. It isn’t bad exactly. And just occasionally it’s almost good. There is, for example, some nice photography of Wyoming locations (much of which looked Arizona-orange). But it has the air of a made-for-TV Western with all that implies. What you might call the hallmark of blandness.

I didn’t know any of the stars. That’s not surprising these days. The cast was led by Jay Pickett, who apparently also headlined in a contemporary Western/drama, Soda Springs, in 2012, which he also co-wrote and which was directed by the same chap as Catch the Bullet, Michael Feifer. Mr Feifer is a New Yorker, known, IMDb informs me, for Merry Kissmas and A Christmas Wedding Tail, which I can’t wait to see, as you may imagine.

The plot is a pretty standard one. Bad guy Jed (Gattlin Griffith) escaped from the pen seeks revenge on the lawman Britt (Pickett) who put him there and comes to his ranch with henchmen. The marshal isn’t there, being out hunting down villains and all, but his old dad (Tom Skerritt) and young son Chad (Mason McNulty, oddly with a fetching shade of rose-pink lipstick) are, along with a pal, Albert (Ryder Kozisek) and so wicked Jed wounds the old-timer, shoots young Albert dead, the swine, and kidnaps Chad. Thus, when Marshal Britt turns up of course he sets out in pursuit, to rescue his boy and bring the criminal to justice. As you will know this is not the first time this plot device has been used. In fact just the other day we were discussing The Last Hard Men, in which Charlton Heston was put in the same position. Still, no one really expects Westerns to be truly original, do they.

We have established the marshal’s toughness in the opening scene, when he shoots dead three outlaws who try to resist arrest. So we know he will be implacable on the trail. He teams up with a Pawnee, Chaska (Cody Jones) and as the Sioux are on the warpath that’s quite handy. He also has, riding along, a green young deputy, Clay (not sure of the actor as no one is listed as Clay in the credits; but I think Callder Griffith, brother of the Jed character) who can shoot but is otherwise naïve and, well, green. He will perish at the hands of the Sioux because of his greenery.

At one point the bad guy Jed, who is making his young captive walk while the gang ride, knocks off the boy’s hat. This, as you know, is a cardinal Western sin, and so the villain will deserve everything he gets when the showdown comes, as it inevitably will in such a movie.

One by one the bad guys are picked off (also dramatically necessary) until only the chief villain is left. Good news for Jeff: though his sixgun has run out of bullets, the hero has a derringer secreted with which he does for the bad guy (spoiler alert, oops, too late). In Westerns derringers are usually reserved for dubious types, especially saloon gals and gamblers. They aren’t really a man’s weapon, it is implied. However, there were exceptions. Even John Wayne and Randolph Scott used one (Duke in Big Jake and Randy in A Lawless Street) so if they can, well, any goody can.

One surprisingly bad feature of this movie was a return to the shots of actors in close-up ‘riding’ fake horses in the studio. I thought that absurdity had long disappeared from the Western genre, but sadly not.

One review said, justly, “There are no surprises or a sense of danger and you can frequently tell not only what’s going to happen next, but what will happen after that.” Another opined, “If you simply want a Western that’s just good enough that it doesn’t actually suck, Catch the Bullet will do the job. If you want something you haven’t seen a hundred times before and/or is actually good you may want to think twice.”

I invested grandly in this movie, for the rental cost 4.99 euros, and for this price I can watch it as many times as I like in 48 hours. However, once was enough.

I have definitely seen worse, but I have also seen better. You might want to dodge the bullet on this one.

PrevPreviousHeston Westerns – the end of the trail
NextEscape from Fort Bravo (MGM, 1953)Next

PrevPreviousHeston Westerns – the end of the trail
NextEscape from Fort Bravo (MGM, 1953)Next
Jeff Arnold © 2022 – All rights reserved – Designed by BetterCallChris
Scroll Up