I was ready to like The Last Hard Men. I am a Brian Garfield fan. This is not because of Death Wish junk or anything like that (though Hopscotch was amusing) but because of his highly enjoyable 1982 guide Western Films, which is opinionated, amusing, perceptive, outspoken and nearly always right. He also wrote some excellent Western novels; The Last Hard Men is based on his 1971 book Gun Down. Garfield knows the West and the Western, and he writes really well about them. He did an uncredited rewrite on the script during production, and the movie follows the book quite closely.

The movie has James Coburn was the chief bad guy, so that was a plus, too. 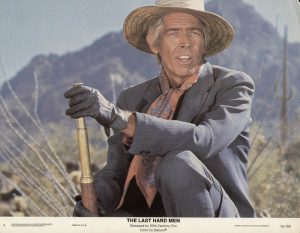 It was shot by Duke Callaghan (the Jeremiah Johnson guy) in some lovely Arizona locations. It had music by Jerry Goldsmith.

Unfortunately, though, I didn’t, really.

It is 70s (1970s, I mean, not 1870s) tough and bloody, and contains an offensive slo-mo rape scene. And Charlton Heston was its leading man.  Now I have tried to be nice about Charlton in Westerns, I really have. I have been more than polite about The Big Country (1958) – click the link for proof – and I’ve praised his Will Penny (1968) to the skies – ditto re link. But I fear that in this one, his first Western since Will Penny (if you discount the family adventure Call of the Wild) he was back to his unattractive sour and bitter persona. In The Last Hard Men he plays Sam Burgade, a retired lawman who sets out in pursuit of an escaped convict who has kidnapped his daughter. Heston wears 1970s clothes and bad false whiskers, and comes across as churlish.

Another weakness: the film was directed by Andrew V McLaglen. I have discoursed elsewhere on the abilities (or otherwise) of Mr McLaglen as a director of Westerns. Let’s just say here that he wasn’t in the top echelons of the profession. Most famous for Gunsmoke and Have Gun – Will Travel on TV, which were indeed usually (not always) very good, he also worked on big-screen Westerns in various capacities from 1945 on and started directing them in 1956 with a Gunsmoke-spin-off James Arness picture known as Gun the Man Down (which sounds a bit like Garfield’s novel but isn’t). His record on the big screen was not good, though. Part of the John Wayne clan of groupies, he directed such Duke farragos as McLintock! and Chisum, and he also did the three weakest James Stewart oaters, the ‘family saga-ish’ Shenandoah, the second-rate Bandolero! and the embarrassingly bad The Rare Breed. In The Last Hard Men, McLaglen’s last feature Western, the director seems, unusually, to be going for a Peckinpahish vibe (and the Major Dundee stars help), but he doesn’t carry it off.

James Coburn said, “It was very hard to justify my character’s vendetta with Charlton Heston. He had no redeeming qualities. He was just out for revenge. The director was Andrew V McLaglen. He knows how to go out, shoot a film and get it done. That’s about all. He’s another director for hire.”

Still, The Last Hard Men does have its plus points too, as I have said. Coburn is one. He plays the escaped convict Provo, “half Injun and all killer”, bent on revenge against the man who put him away. In his 1979 book The Actor’s Life, Charlton Heston said that Sean Connery and Robert Shaw were considered for the role but in the end it went to Coburn. Provo is clever, manipulative and very, very angry. Coburn was a sort of anti-Heston, really good in any Western he appeared in, even if it was TV pulp. He started doing oaters on TV in 1958 and at one time or another was in pretty well every Western TV show you care to name.

His big-screen Western debut came with a first-class performance as Whit in Ride Lonesome, one of that excellent series of Budd Boetticher-directed Randolph Scott oaters in the late 50s. In 1960 he was of course the silent knifeman Britt in The Magnificent Seven. He was one of the best things about Major Dundee as the one-armed scout Samuel Potts, and although I personally don’t care for Duck, You Sucker (or whatever you want to call it) – a combination of Rod Steiger and Sergio Leone being pretty well death to film quality – it certainly added to Coburn’s fame. The high-point of Coburn’s Western career was undoubtedly again with Peckinpah, as Pat Garrett in Pat Garrett & Billy the Kid. He was perhaps the best screen Garrett ever. The Last Hard Men was one of his last big-screen Westerns and he is excellent in it.

We are in 1900s Arizona, with telephones, automobiles, refrigerated trains and automatic pistols. There is a strong end-of-the-West tinge to the movie, as hero Heston disparages these accoutrements of modern-day society and returns to the saddle and six-gun, casting off collar and tie and suit in favor of range duds, to lead an old-fashioned posse against the murderous criminals. “Modern times,” he moans. “I liked the world the way it was.” He gets his chance: “Zac Provo’s made it my time again.”

The band of prison escapees number (naturally) seven, and everyone knows this is the Mystical Western Number. Mind, they are soon down to six when they murder one of their less savory colleagues, and of course, as is the way in these movies, they are, one by one, killed off until only the boss bad guy remains (he’s always the last to die). There are fairly standard gang members, such as the African-American Weed (Thalmus Rasulala) and a kid, Shelby (Larry Wilcox). Provo’s sidekick is the Mexican Menendez (Jorge Rivero) and he is quite good too. John Quade plays the ugly rapist Gant. They are an unpleasant bunch, as they were supposed to be.

On the side of the angels, Christopher Mitchum is Hal, the young fiancé of Heston’s daughter. He accompanies his prospective father-in-law despite Heston’s misgivings. Though a greenhorn from Massachusetts (how green can you get?) he turns out to be tougher than expected, in fact in some ways tougher than his gal’s dad. There was quite a tradition in Westerns of Easterners turning out to be gutsier than we thought they would be, and perhaps The Big Country, with Gregory Peck as the Easterner, is the classic example.

Barbara Hershey is the daughter, Susan. She’s not bad. I liked Michael Parks as Burgade’s young successor, Sheriff Nye. He is shrewd, observant and tolerant of his dinosaur predecessor. Richard Eder in The New York Times liked him too: “I liked the dry performance of Michael Parks as the young sheriff who has more faith in his telephone than in old-fashioned shoot-outs.”

The ending is ambiguous and unsatisfying.

The Jerry Goldsmith music is rather fine, brazen and sinister by turns, but in fact it was not an original score. Leonard Rosenman had done that but it was rejected, and The Last Hard Men received a hodge-podge of bits from other Goldsmith Westerns. It’s still good, though.

So you see it did have its points. But overall I fear it was an unsuccessful picture.

Variety was probably politer than it deserved, saying, “The Last Hard Men is a fairly good actioner with handsome production values and some thoughtful overtones…The details of life at a crucial transition point in American history are well captured in the script and in the art direction.”

It didn’t do too well, Western honors that year going to The Shootist and The Outlaw Josey Wales, fine films both. Even the pretty bad The Missouri Breaks did better.

As for Mr Heston and the Western, there would only be one more with him in the lead, and then a couple of cameos. But more of that next time! 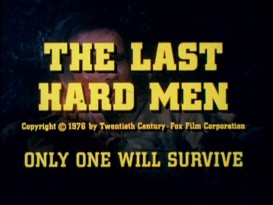