A pretty picture but pretty boring

Well, we’re nearing the end of our Hestonology thread. Charlton would only lead in one more Western, which he made in the summer of 1979, and do a couple of cameos in the 1990s, and then it was sayonara, baby. 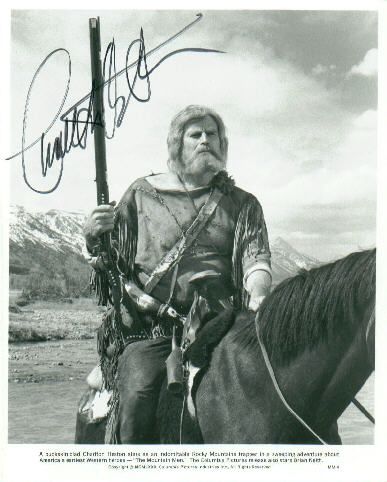 The Mountain Men was written by Heston’s son Fraser, his only Western, and directed by Richard Lang, whose only feature as director it was (he helmed Kung Fu episodes on TV, and some of The Brian Keith Show). It seemed that neither writer nor director had much of a clue about the big-screen Western (or pre-Western). The picture is overlong (102 minutes) and drags. Brian Garfield in his Western Films called it “slow and boring”, while Kim Newman calls it in Wild West Movies “a very stiff and dull epic.”

Earlier screen mountain men, trappers and pioneers, such as Kirk Douglas in The Big Sky (1952) and Clark Gable in Across the Wide Missouri (1955) had been impeccably clean-shaven and managed to remain surprisingly clean, but Jeremiah Johnson (1972) ushered in the shaggy Robinson Crusoe look with matted beard and smelly animal-hide clothes de rigueur. So Heston, in his mid-fifties at the time of filming, appears as a hirsute and sartorially unrefined Bill Tyler, and do does his friend Henry Frapp, played by Brian Keith, evidently enjoying his part.

While Tyler is dour and disappointed (a classic Heston persona), Frapp is cheery and optimistic. Keith (who had been paired with Heston in Arrowhead all those years before) had a good Western pedigree, better than Heston’s. He was excellent as Dave Blassingame in Sam Peckinpah’s classy The Westerner on TV and had memorable parts in 18 Western feature films, including lead or semi-lead parts in The Deadly Companions, The Raiders and Sierra Baron. He was guilty of overdoing it occasionally, most horribly in the ghastly The Rare Breed, (1966), and he comes close to overacting in The Mountain Men but in the end stays the right side of the line. He is a useful counterweight to the miserable Tyler.

There’s some very pleasant Metrocolor photography of picturesque locations, such as the Grand Teton National Park and the Bridger and Shoshone Forests in Wyoming, as well as Yellowstone. It was shot in 2.35 : 1 format by Michel Hugo. The visual aspect is in fact the best thing about the movie.

Not the music (Michel Legrand): that’s intrusive and inappropriate, and gets on the nerves a bit.

There are some dreadful horse falls – shame on the film-makers for that.

It was the last movie of Victor Jory, then pushing 80, as the 110-year-old chief Iron Belly (he wears an ancient breastplate). Jory was a stalwart of the Western, appearing in 76 between 1933 and this one. He was best as a crooked saloon keeper/town boss with a derringer.

The nostalgic notion of ‘the end of the West’ was a conspicuous theme of Westerns, and had been throughout the history of the genre. The idea that the West is dying, civilization encroaching and the good old ways are doomed was noticeable from Owen Wister’s The Virginian (1902) right through to all those late Westerns about gunfighters as dinosaurs, out of place in modern times, such as Ride the High Country (1962), The Wild Bunch (1969) and The Ballad of Cable Hogue (1970) – all Peckinpah films, for he was especially fond of the notion – as well as The Shootist (1976) and many more. Heston’s own previous Western, The Last Hard Men, was another example. But trapper/mountain men pictures were usually more optimistic and forward looking than that. After all, the West was yet young and the stories told of explorers and pioneers opening up the virgin land, which they thought of as empty, free for the taking and ripe for settlement. There’s no hint of ‘end of the West’ in The Big Sky. Au contraire. But by 1980 and The Mountain Men the emphasis is on how the beaver are all trapped out, the fashion for silk hats now making the pelts anyway unsellable, and old codgers like Tyler and Frapp being by now anachronisms.

Tyler tells the dying Frapp a friendly lie just as Yul Brynner did to Brad Dexter in The Magnificent Seven (1960).

In all honesty, as a Western, this one is a bit of a yawn.