Dino does a TV Western

When I said I was going to do a Dinorama, a survey of the Westerns of Dean Martin, reader Boppa suggested I take a look at a Rawhide episode titled Canliss, which was in fact the only TV Western Martin did, in addition to his eleven feature-film oaters.

So I did watch it. It’s available on YouTube and in quite good picture quality too, so it was rather a pleasure. I must say, Canliss (S7 E6) reminded me of the quality of that show. The episode was very well done, notably well photographed (by Howard Schwartz), skillfully written (Stirling Stilliphant, of Alfred Hitchcock Presents and Perry Mason fame) and handily helmed, by Jack Arnold, a very talented director in my view. Arnold (no relation, sadly) was one of the great directors of 50s sci-fi flicks but, as the IMDb bio says, “His films are distinguished by moody black and white cinematography, solid acting, smart, thoughtful scripts, snappy pacing, a genuine heartfelt enthusiasm for the genre and plenty of eerie atmosphere” and that definitely applies to his Westerns, including this one.

In this Western, which for Dean came between 4 for Texas and The Sons of Katie Elder, Dino is famed gunfighter Canliss, the fastest gun in the West kind of thing, and in the first scene, very typically Western, we get a young wannabe gunslinger (Scott Marlowe) wanting to draw down on Canliss, for the fame, accompanied by another well-known figure, the dime-novel biographer (Theodore Bikel), riding along, hoping to document (or rather sensationalize) the encounter.

This whole notion of quick-draw legend was essential to Hollywood, and taken as fact for years, though of course it has no foundation in truth whatsoever. Martin is a classic Tinseltown gunfighter, decked out all in black with twin Colt .45s slung low on his thighs, a gun for hire who can outdraw anyone and has a record of ‘kills’. These men only existed in fantasy and in the mind of pulp writers and movie-makers but hey, we’d kinda miss ‘em if they weren’t there.

Martin is superb in this. He was such a good actor and it is tragic that the majority of his Westerns (indeed, all his films) he just sleepwalked through, going through the motions, and not caring if the script were fine or total junk, they all earned a buck. 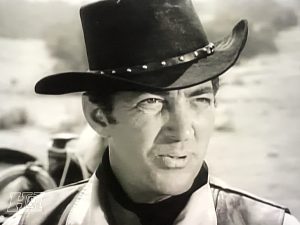 The episode was unfortunately let down by the (over)acting of the person playing his wife Augusta (Laura Devon), and this was all the more noticeable in her scenes with Dean, who was restrained and powerful as the gunfighter with a conscience and a desire to quit. 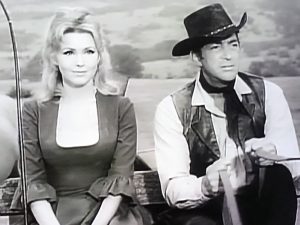 It’s one of those Rawhide episodes in which the usual crew are hardly seen. Gil Favor makes a perfunctory appearance, and there is a hint that he and Mrs Canliss had an affair once, and we glimpse Wishbone but there’s no sign of Rowdy Yates. The story concerns only the Canlisses in a dusty Mexican town, and the man Dino has been paid to kill, the head honcho of the place Don Miguel (Michael Ansara).

I am told that Dean Martin was the only guest star that got his credit at the start of an episode; all others (and they had some really good guest stars) were in the end credits.

It’s all very well handled, with atmosphere and a strong performance from Martin. It would definitely be worth 50 minutes of your time.