How a Western should be

As part of our continuing Dinorama, our season of Dean Martin’s Westerns, we’d better take a look at Rio Bravo, because it was perhaps his most famous Western role. 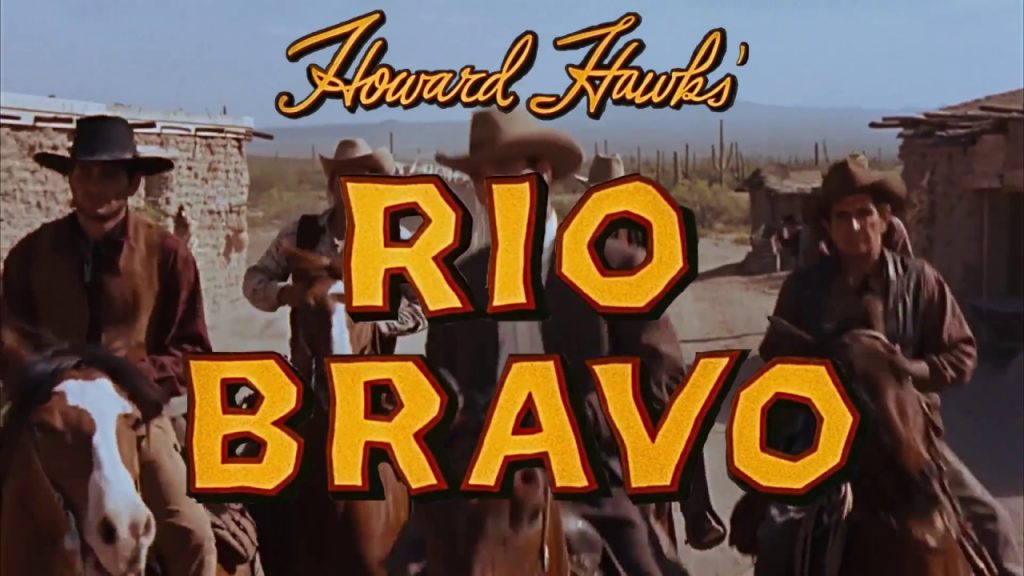 The Mexicans call the Rio Grande the Rio Bravo and the John Wayne picture Rio Grande was called Rio Bravo in many countries. This is not that. Oregon Passage in 1957 also bore the alternative Rio Bravo. Howard Hawks directed Wayne with the same story as their Rio Bravo in El Dorado in 1966 and yet again as Rio Lobo in 1970. Is that all clear? I wouldn’t want you to get confused.

Three years on from The Searchers (and he hadn’t done a Western since) this for Wayne was a totally different picture. Duke had entered his later years as a fixture of the Hollywood Wild West. Rio Bravo has little Fordian  artistry about it. Though directed by Howard Hawks and co-starring Walter Brennan, it was no Red River either. It was a classic, commercial Western of straightforward design, and it had them waiting in lines all round the block to get in. It sold 11 million tickets and was the highest-grossing western of the year, making over $10.5 million on its $1.2m budget.

Hawks hadn’t made a picture since 1955 and was 62 years old and wondering if he still had it. He did. Roger Ebert wrote, “To watch Rio Bravo is to see a master craftsman at work. The film is seamless. There is not a shot that is wrong. It is uncommonly absorbing, and the 141-minute running time flows past like running water.”

It was written by Jules Furthman and Leigh Brackett, who had worked together for Hawks on The Big Sleep. They were clearly real craftspeople. The source was a story by BH McCampbell.

Southern Texas (filmed in Arizona). Sheriff John T Chance throws Joe Burdette (an excellently villainous Claude Akins) in jail for murder (he actually kills Kurt Russell’s dad) and has to keep him a week and fight off a whole gang till the US marshal gets there.

He has only “a drunk and a cripple” (Dean Martin and Walter Brennan) to help him, that is until Ricky Nelson as Colorado arrives – this was the late 50s and early 60s when no Western was complete without a pop singer.

Nelson looks about 12 (he turned 18 during shooting) and has the tightest trousers ever seen on film. He can’t sing worth a damn compared to Dean Martin but they make a decent duo with My rifle, pony and me (the tune had been used as Settle Down in Red River and Dmitri Tiomkin reset it), with Walter Brennan’s harmonica obligato. Luckily Wayne (‘Singin’ Sandy’, remember?) declined to join in. In many ways this scene jars; it’s sort of parachuted in. But I wouldn’t have missed it for anything. It is said that Hawks did not want to cast Nelson, whom he considered to be both too young and too lightweight, and deliberately gave him the fewest possible number of lines for a third-billed star. He had really wanted Elvis, who was enthusiastic about the opportunity. Unfortunately, Presley’s manager, Colonel Tom Parker, wanted too much money and top billing. However, Hawks later admitted that having Nelson’s name on the poster had probably added $2 million to the film’s box office performance.

Hawks seems to have taken over the whole Ford stock company. Ward Bond was there to help the sheriff and this was the last time he and Duke appeared together in a movie.  But he soon gets shot. Actually, he doesn’t. His death was done in long-shot with a double because Ward had already left to work on Wagon Train. I tell you this on a strict need-to-know basis. In bit parts you  can spot (if you don’t blink) Sheb Wooley, Robert Donner, Fred Graham, Myron Healey, Bob Steele and even Yakima Canutt, as ‘Gunman on Horse (uncredited)’.

Angie Dickinson, as Feathers, the lady gambler who falls for Wayne – a classic Hawks dame – shows off her sensational figure, quite often. Wayne was apparently nervous about their love scenes; he felt he was now middle-aged (he was 51) and at 27 Angie was a bit on the young side. But it works. The production apparently had her legs insured by Lloyds of London, as a publicity stunt. 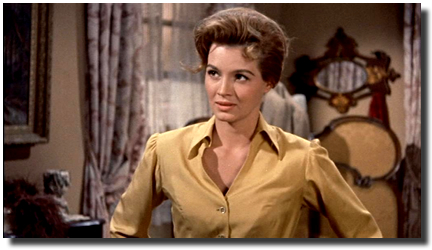 Wayne is his usual leathery self, spinning his Winchester to cock it. I love his short jacket and calf-length pants and that hat has to be one of the best ever. Wayne had worn it since Stagecoach. This was the last time. Later, he loaned it out to Sammy Davis Jr for Sergeants 3. He is magisterial in Rio Bravo: he doesn’t push himself forward, he is just there, a towering presence. And all the characters feel it. All the actors too – Claude Akins recalled that during filming all the actors found themselves starting to talk like him.

Brennan had famously been Wayne’s cantankerous sidekick in Red River. He specialized in that type of role, making the most (never more than in this movie as the limping Stumpy) of the cackling-old-hen part. Actually, he was a very good actor, three-time Oscar winner and once more nominated as Best Supporting Actor, but with Wayne (they did seven Westerns together) he was usually the crusty old-timer. 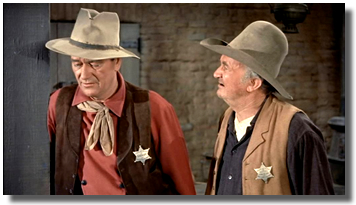 Pedro Gonzalez Gonzalez is amusing as the diminutive but supportive hen-pecked hotelier. The film has come in for some criticism for its stereotypical portrayal of Mexicans. Guilty as charged, I guess. Pedro did kind of go in for the ‘ay caramba’ kind of Mexican. It’s still fun, though. 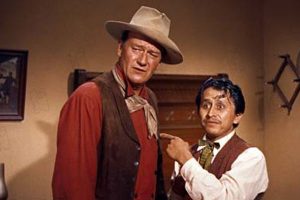 John Russell, never less than excellent, is Nathan Burdette, the ruthless rancher, Claude Akins’s brother, determined to bust him out of Chance’s jail. 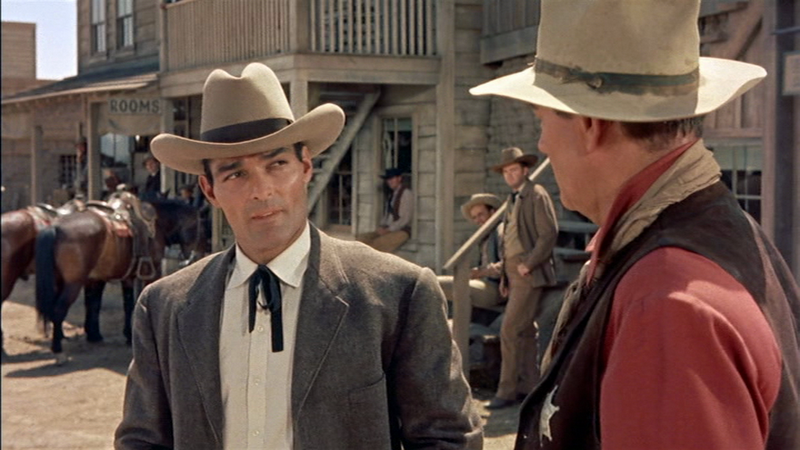 The stand-out, though, as far as acting went, was Dean Martin, as the deputy Dude aka ‘Borrachón’. Rumor hath it that Dino asked his friend Marlon Brando for advice on the role. A big mistake if so: in Westerns Martin was ten times the actor Brando was. I have heard that Montgomery Clift was intended for the part but turned it down, not wanting to work again with Wayne after Red River, and it was he who suggested Martin. I don’t know how true that is. 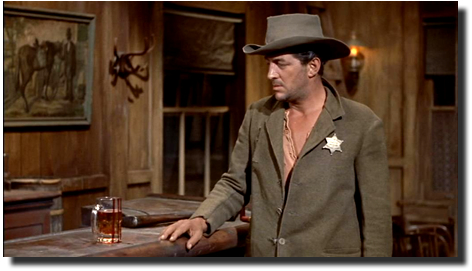 One actor who does not appear is Harry Carey Jr, though he is listed in the credits. Dobe had a bit of a drinking problem at the time. He called director Hawks “Howard” instead of “Mr Hawks” on one of his first days on the set, a huge blunder. His contract, including his pay and his screen credit, was honored, but his part (as a townsman) was cut. Curses.

There’s a good bit when Colorado and Chance take a derringer away from a seedy gambler.

The picture was shot in Technicolor at Old Tucson and surrounding AZ terrain by the great Russell Harlan (who had done Red River). He said he modeled the look of the film on the frontier paintings of Charles Russell. The movie is certainly a good looker.

This Rio Bravo a fun film, full of color and corn, and none the worse for that. It has a splendid final shoot out. It’s predictable and full of clichés but it’s a real Western with zip and pzazz and you have to love it. High Noon it ain’t but hey, who cares.

Actually, it was made, six years after High Noon, as a kind of riposte. Wayne and Hawks had both disliked the Gary Cooper picture, in which the marshal had thrown his star in the dirt. It was unAmerican, they thought. Law ‘n’ order has to be respected. In this version, the sheriff obstinately retains his badge and wins out over the bad guys against all the odds, with the help of some townspeople, but essentially by his own bravado. Of course High Noon was one of the greatest examples of the Western genre, perhaps even the greatest, whereas Rio Bravo is just a fun way to fill a movie theater. 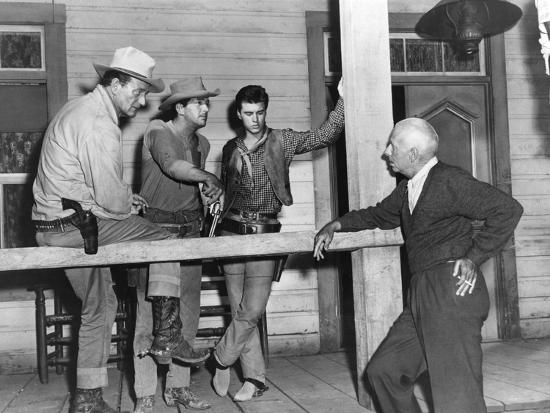 At the time, the New York Times critic AH Weiler was a bit dismissive: “It is well-made but awfully familiar fare”. For me, that’s right, but that’s a good thing. The critic added, “Even though the villains finally do bite the dust by the score, they take much too long (two hours and twenty minutes) to do so.” That’s rot, Weiler. Myself, I do find many Westerns overlong; but not this one. I’m with Ebert: the movie rattles along and never drags for an instant. 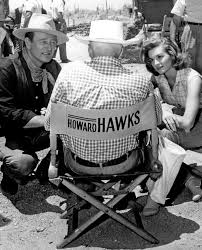 Variety liked it better, calling it “a big, brawling western” and adding, “Producer-director Howard Hawks makes handsome use of force in logically unravelling [sic] his hard-hitting narrative, creating suspense at times and occasionally inserting lighter moments to give variety.” 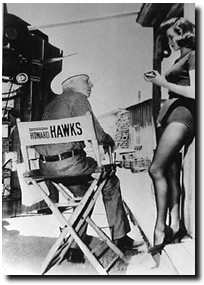 Later (1982), Brian Garfield in his Western Films was down on it, saying, “It’s overrated, overripe and overlong.” It’s rare that I disagree with Mr Garfield but I do this time.

The picture has ‘grown’ with the years, and these days is pretty well universally praised. Tony Sloman in the Radio Times said, “Underrated at the time of its release, this majestically paced western is one of the finest achievements of the genre and stands as a career-best for many of its participants.” More to the point, Jeff Arnold thinks Rio Bravo is a cracking good Western. With the possible exception of Day of the Outlaw, it was the best Western of 1959.

Quentin Tarantino said that if he started getting interested in a girl he would show her Rio Bravo. And she better like it…