Dino is the bad guy

In our Dean Martin season we’ve so far looked at two very bad Westerns he did, Sergeants 3 and 4 for Texas, so let’s now look at a good ‘un.

Well, I think it’s a good one. Underrated, I’d say. 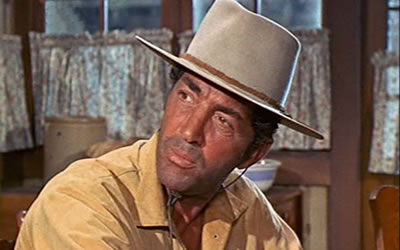 Dino was, for such a nice man, surprisingly good as an out-and-out bad guy. Here he is a lawman gone rotten who owns the town of Jericho, or 51% of it anyway. He has the saloon, cattle ranch and gold mine, “thus neatly encompassing the economy of the old West” as Roger Ebert put it, and now he wants to get his hands on the stage line too, and probably on at least 51% of its owner, Jean Simmons, but she won’t play, partly because she’s sassy and independent and says damn and drinks whiskey, and partly because George Peppard was at his handsomest in 1967. He looked great in his gambler’s frock coat, even if his coiffure was rather Alan Laddish. Jean wasn’t going to fall for Dean with George around.

Dean is backed up by various heavies, including the sadistic Slim Pickens, who is real mean with a whip. It’s a pretty brutal bit, that, in fact – and better staged than Gordon Douglas managed on Chuka the same year.

But George has a far stronger team because John McIntire is on it, as crusty ex-marshal Ben Hickman. Perhaps he was the brother of Morg Hickman from The Tin Star. He’s great, as always.

OK, yes, this is in many ways a standard 60s Western, nothing really outstanding about it, I guess. It had originally been set up as a project at Fox, with William Holden and Van Heflin starring, but that never happened, and actually I’m quite glad, much as I like Holden in Westerns. Sydney Boehm wrote the script (based on the Marvin H Albert novel The Man in Black) and though he did just fine on The Big Heat for Fritz Lang, he wasn’t the toppest-notch writer of Westerns (The Tall Men, The Savage, a couple of ho-hum Alan Ladd oaters). This was his last screenplay in fact. TV and low-budget movie director Arnold Laven was behind the camera, and he too was hardly magnificent at big-screen Westerns, the Chuck Connors Geronimo being about the summit of his achievement…

The music was by Don Costa, probably better on Hello, Dolly! The picture was photographed by Russell Metty, so that’s good, though most of it was shot on a studio set and it is quite static, as ‘town’ Westerns can be. When they finally do get out, however, the Kanab, Utah locations are very nice.

So all in all, the production didn’t really have the stars aligned to be a great Western. And indeed it wasn’t great. But it was good, better, one might think, than it had a right to be. I do think it was Laven’s best oater, and possibly Martin’s, too, Rio Bravo notwithstanding. When McIntire, Peppard and Simmons get together to take the town away from Dean, it’s actionful and it rattles along at the pace of a good six-up stage. Some of the cowed townsmen rediscover their courage and join up, and dynamite and six-guns do the rest. The plot isn’t exactly new, far from it, but the writing is decent and the acting is above average so the movie works.

There’s a fashionable 60s amount of blood (though it still registered only about 4.5 on the Peckinpah Scale).

As so often, honors go to Dean, who was rarely better than this, though I think the writer and director short-changed us a bit by giving him too little screen time. He reminds me of Robert Mitchum in a way: so often sleepwalking through parts, to earn a buck, just occasionally he fired on all cylinders and then, boy, watch out. 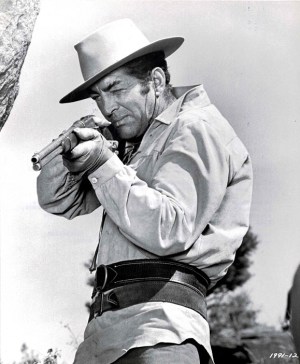 McIntire, one of the great stalwarts of Western acting, is also excellent. In this movie he was just turned 60 but in fact he looked just turned 60 in every single Western he was in.

Peppard and Simmons are perfectly OK and Slim is excellent, obviously. Peppard only did four feature Westerns and a TV movie, and they weren’t terribly good. But then he came late to the genre so you can’t really blame him. He debuted seventh-billed in MGM’s elephantine How the West Was Won and Jericho was only his second outing in the saddle – and very much his best. As for London-born Simmons, probably most famous for Guys and Dolls, Spartacus and being Ophelia in Lawrence Olivier’s Hamlet, she had reached Western stardom by being Julie in The Big Country in 1958, but that and Jericho were her only attempts at Western greatness.

Anyway, the acting overall is superior.

In some ways it’s an “old-fashioned” Western, quite 50s in style for 1967. Roger Ebert said, “The advertising campaign for Rough Night in Jericho asks the question ‘Who says they don’t make Westerns like they used to?’ I can’t figure out if this meant to inspire praise or forestall criticism, but one thing’s for sure: This is the kind of Western they used to make, all right.” He added, “If you haven’t seen a Western in 40 years, go see Rough Night in Jericho and catch up.” Dennis Schwartz, who didn’t like it, wrote, “This ugly routine Western is advertised as the kind of old-fashioned one they used to make. If that’s so, it’s good they stopped making them.” 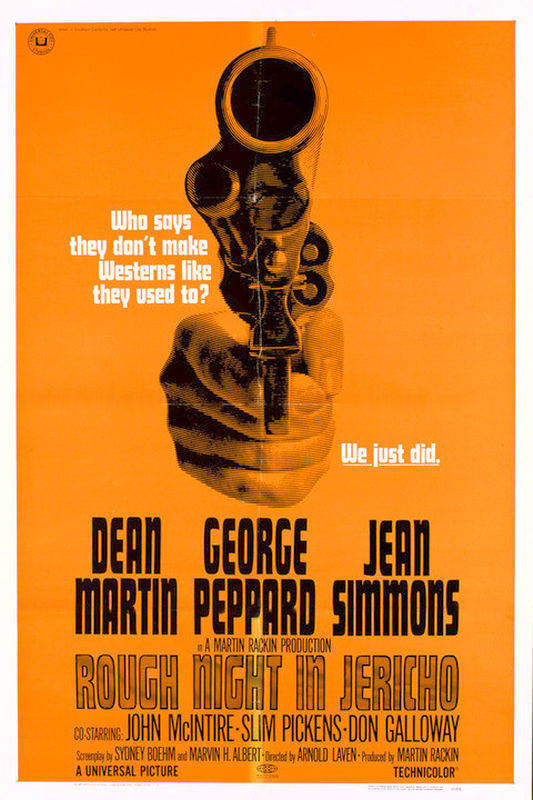 Variety said that the movie “is lacking in the suspense one expects from a big league western but regulation action is there in good measure.”

It made $1.75m in the US that year, so that wasn’t bad (the top grossing Western was Hombre, at $11m; El Dorado and The War Wagon grossed $6m apiece).

So, yes, malgré Monsieur Schwartz, this oater has quite a lot going for it. It was miles better than many of the spaghettis then going the rounds (not that that was hard) and as a Western it can hold its head up high with that year’s offerings, such as El Dorado and The War Wagon or other oaters of the period such as Hour of the Gun, The Way West, etc. Only Hombre beat it in Western quality, I’d say. It deserves a watch.

PrevPrevious4 for Texas (Warner Bros, 1963)
NextCanliss, an episode of Rawhide (CBS TV, 1964)Next

PrevPrevious4 for Texas (Warner Bros, 1963)
NextCanliss, an episode of Rawhide (CBS TV, 1964)Next
Jeff Arnold © 2022 – All rights reserved – Designed by BetterCallChris
Scroll Up