The Westerns of Lloyd Bridges

For me, Lloyd Bridges meant Sea Hunt, a series to which I was addicted as a boy, back in the Bronze Age. Of course I knew he’d been Deputy Harvey Pell in High Noon when he was younger, so that upped his cred in my eyes (even though he didn’t support my hero Gary Cooper well enough) but I never really thought of him as a Western actor in those days. 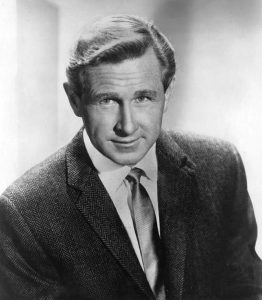 Since then, however, I have come to appreciate that he was indeed a Western actor, and a very good one too.

He didn’t usually lead in our noble genre (well, he was blond, so disqualified) but as a character actor he was always strong and memorable.

He was born in 1913 and at the age of one he won his first award: he was the winner in a fat-baby contest judged by President Taft, who thought Lloyd was as fat as he was.

A little later he acted on Broadway but then he got an early Columbia contract, and, to begin with, a couple of roles such as ‘College boy (uncredited)’ and ‘Young man (uncredited)’ – well, we all have to start somewhere. Then he was eleventh-billed in a Sidney Salkow-directed epic, The Lone Wolf Takes a Chance, in 1941.

His first Western was a Charles Starrett picture, The Medico of Painted Springs, in 1941, when he was a cowhand, and he did another the same year, The Royal Mounted Patrol,  when he got a speaking part, fifth-billed, no less. That year too he got a role in a Bill Elliott oater, The Son of Davy Crockett. Progress! Similar parts followed and he became a regular on Starrett pictures through 1944.

Bridges later said, “I didn’t have enough maturity for a leading man. I looked too broad in the shoulders … too much like a kid. I never could get into [Columbia studio boss] Harry Cohn’s office. All the best roles went to Glenn Ford and William Holden. They just put me in these awful B-pictures.” He left Columbia to enlist in the US Coast Guard.

After the war he returned to acting and got a lead role in Universal’s Secret Agent X-9. 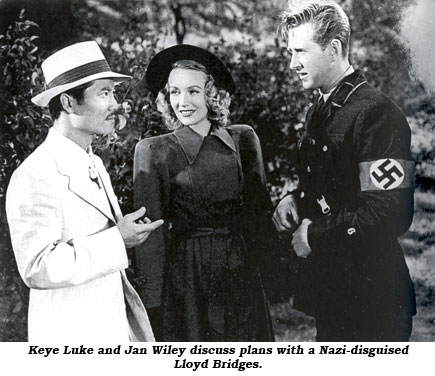 In 1945 he made a Western breakthrough when he landed the part of Henry Dreiser, the settlers’ leader, in the quite big Randolph Scott picture Abilene Town, adapted by Harold Shumate from an Ernest Haycox novel and released in January 1946. In it he got to romance Rhonda Fleming, so things were definitely looking up.

Later in ’46 he secured a better part and in a better film when he was the bad guy Johnny Steele in Universal’s Canyon Passage, another Ernest Haycox tale, directed by talented Jacques Tourneur. He was a mob leader, a real lowlife, out to hang Brian Donlevy and indeed anyone else he can get his hands on. 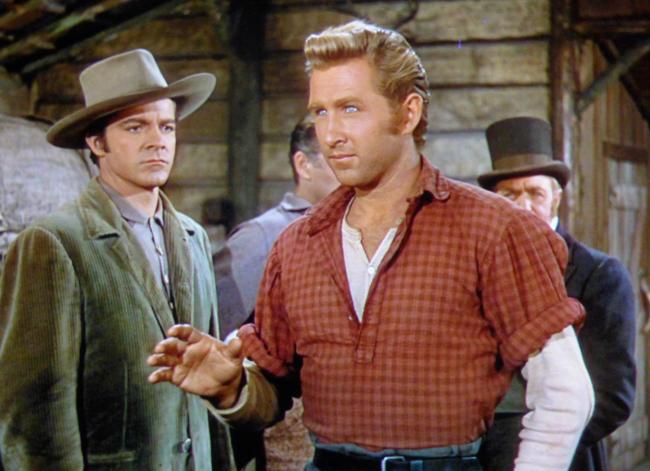 Lloyd Bridges was becoming known as a good character actor in Westerns.

There were two Westerns in 1947. First came Ramrod, a Harry Sherman production released by United Artists and based on a Luke Short story. It was a fine noir picture, starring Joel McCrea and Veronica Lake, and directed by Lake’s husband André De Toth (it was to have been John Ford but he passed it to De Toth). Bridges was Red Cates, and though it wasn’t a big part, he was noticed.

The other ’47 Western, or proto-Western anyway, was Cecil B DeMille’s big-budget Paramount picture Unconquered, with Gary Cooper. Lloyd was only a redcoat lieutenant at the dance, but still, he was in it.

Two Universal Westerns followed in 1949 (he was busy in other genres in ’48, poor sap) but neither was very good. In the first, Red Canyon, he played the no-good son of outlaw chief John McIntire and brother of the goodie hero Howard Duff. He’s a real bad ‘un because he tries to take a whip to the fine stallion the movie is all about. He gets his just deserts. In Calamity Jane and Sam Bass, another Duff picture (in all senses) in which Mr Duff plays Sam Bass, Lloyd is his pard, who gets tempted into the Ways of Wickedness and lives by the sword, or the pistol anyway. So you can guess what fate awaits him. 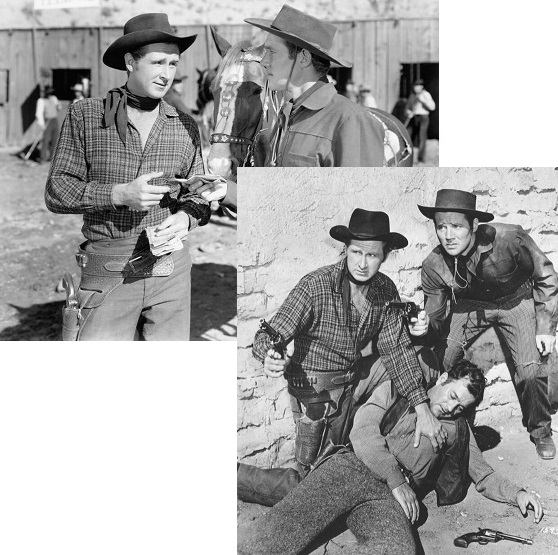 Still, bit by bit he was building his profile.

He did a Western for Warners in 1950, another Randolph Scott oater directed by Edward Marin, as Abilene Town had been, Colt .45, a rather silly picture about the famous Colt pistol (which hadn’t been invented when the story was set). Lloyd was fourth-billed this time, as the chief henchman of bad guy Zachary Scott, the villain who steals the precious new revolvers from salesman Randy. Although a bit of a plodder, the film was a commercial success, so that helped Lloyd’s career. 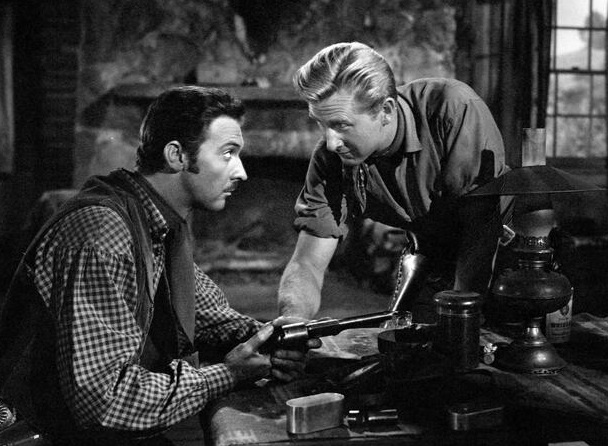 The early 1950s, however, would mark a turning point in Lloyd Bridges’s Western career.

Little Big Horn in 1951 was a low-budget black & white Western from Lippert, so it hardly made a huge splash, but Bridges took the lead in it, and it was actually a quality picture. It’s a ‘peripheral’ Custer story about a group of men aiming to join up with the 7th before the battle. It was written and directed by Charles Marquis Warren. Bridges plays the tough, hard-bitten commanding officer, Captain Donlin, who loathes his subordinate Lt Haywood (John Ireland, also excellent) because the man made a pass at his wife.

It is remarkable really that the same actor who played that grizzled, world-weary soldier could, the very next year, play a sulky youth, but he did. Third-billed in the great High Noon, the picture that made Bridges’s Western name, Lloyd was absolutely excellent as the resentful young man who thought he deserved to replace the retiring marshal (Gary Cooper) and who blames Coop for it but who is passed over as being too immature. It is complicated by the fact that he has replaced the marshal in the bed (although of course this is suggested, not shown) of the saloon keeper Helen Ramirez (a magnificent Katy Jurado). One of the greatest Westerns of all, High Noon hugely benefited from Bridges’s performance, which was at least the equal of that of the rest of the cast. 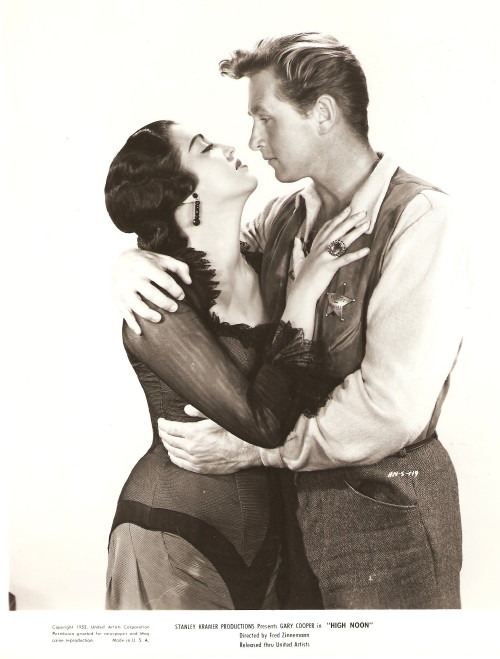 Perhaps as a result, three Westerns followed in 1953, one of them in the lead: Last of the Comanches, The Tall Texan and City of Bad Men, for Columbia, back at Lippert and for Fox, respectively.  The first was a bit of a plodder, a Broderick Crawford Western in which Bridges was rather wasted in a relatively minor part – it was a big come-down from High Noon. 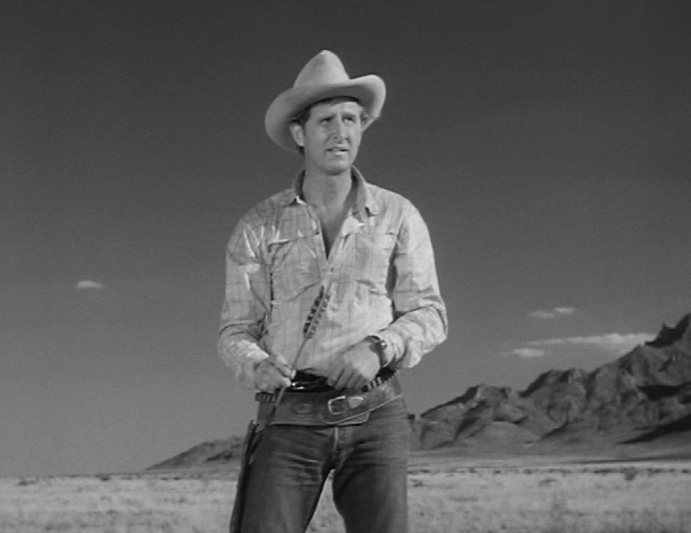 The Tall Texan, soon to be reviewed, was a low-budget affair, a gold-lust/Apaches yarn, again but Bridges did get top billing over Lee J Cobb. They were rivals for the hand of the fair Marie Windsor. 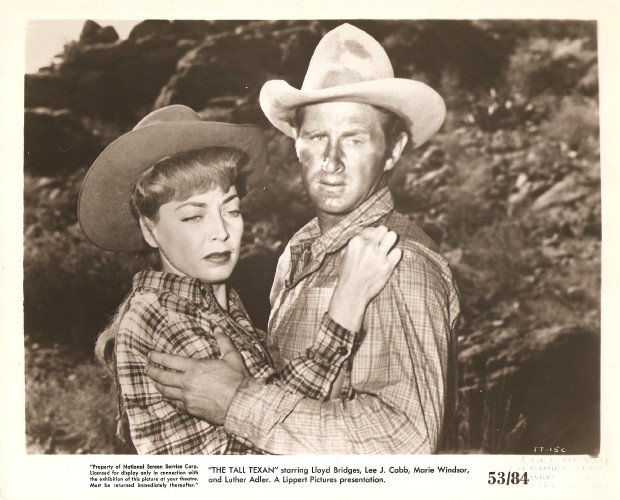 City of Bad Men was a Western heist movie directed by Harmon Jones and not at all bad. Dale Robertson starred and Lloyd was his punk kid brother, the sort of role Skip Homeier might have taken. Bosley Crowther said in The New York Times review that he was “just a trifle too sneaky and mean” but I thought he was rather good.

Lloyd’s next Western came in 1955 when he was cast as one of the henchmen of heavy Robert J Wilke (another henchperson was Jack Elam) in Wichita, a Joel McCrea Wyatt Earp yarn. It was a smallish part but a good ‘un. Later the same year he did the Roger Corman flick Apache Woman, topping the billing (though not cast in the title role). The whole movie was only budgeted at $80,000, so I don’t think Lloyd can have been paid much. I guess you take work where you can get it. Anyway, he always brought quality to a Western. He plays a reasonably pro-Indian government agent trying to unmask a plot to inculpate Apaches for crimes they did not commit. 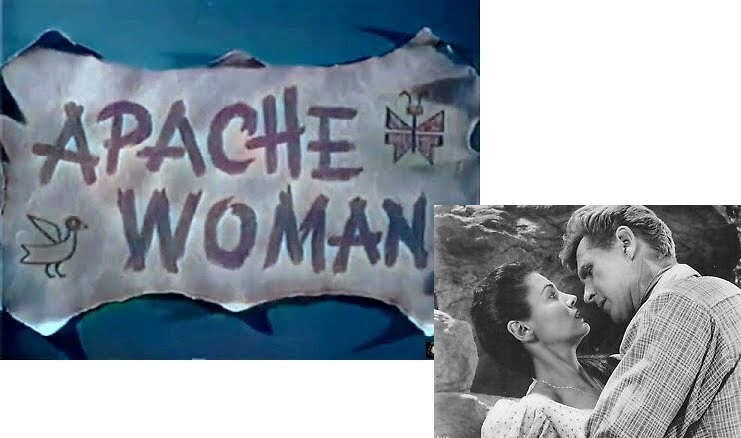 Paramount’s The Rainmaker in 1956 was a semi-Western. It was a Depression-era tale starring Burt Lancaster and Katharine Hepburn which Bosley Crowther in The New York Times called “an unrestrained torrent of farce.” Lloyd had a wicked-brother role. Crowther said of the cast “they all look like store actors pretending to be rubes.” Anyway, I don’t count it as a Western.

The following year he got a role in Ride Out for Revenge, definitely a Western, though maybe a minor one, starring Rory Calhoun. It was beautifully photographed in black & white by Floyd Crosby of High Noon fame. Third-billed Bridges was the best actor on the set, playing an army captain.  Rarely has an US Army officer been so vilified in a Western. This one is a drunken, cowardly, incompetent slob who condones murder, and Bridges, by now clearly a talented Western actor, plays it brilliantly. For me, it was his best role since Little Big Horn and High Noon. 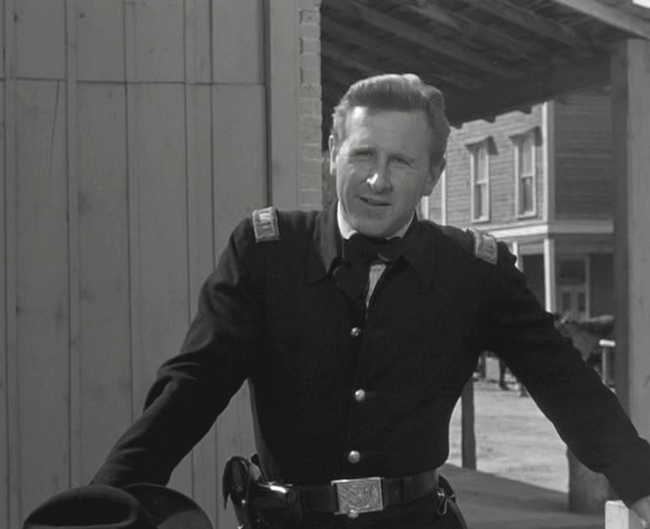 And unless you count Running Wild, a 1973 family film which has all the look of a TV movie and which is a present-day story of a woman photographer going to Colorado to film wild horses (Lloyd is the local land agent) that was all she wrote as far as big-screen Westerns were concerned. Pity. 1957 was early to quit the genre he was so good in.

But he turned to TV work, and not only Sea Hunt. Even before Ride Out for Revenge he  had done a couple of Western episodes of Chevron Hall of Stars, titled Across the Dust and Prairie Dog Court. Later he did four Zane Grey Theatre shows, Time of Decision in 1957, Wire in 1958, Ransom in 1960 and Image of a Drawn Sword in ’61. He did a Frontier Justice episode in 1958, also called Wire.

But of course Lloyd Bridges is best known as a small-screen Western actor for his show The Loner that ran for a season 1965 – 66. It was created by Rod Serling a year after the cancellation of The Twilight Zone and was one of the last TV series on CBS to air in black & white. Bridges played a post-Civil War Union army captain wandering the West. Critic Cleveland Amory wrote that “Serling obviously intended The Loner to be a realistic, adult Western,” but the show’s ratings indicated it was “either too real for a public grown used to the unreal Western or too adult for juvenile Easterners.” At any rate the show was not renewed. It’s available on DVD now, if you’re interested. 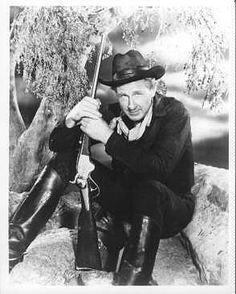 Later in life, when he was 56, he did a TV movie, The Silent Gun, which first aired on December 15, 1969 on ABC. It was about one of those lawmen with a reputation as the fastest gun in the West who almost kills an innocent kid. He decides that he is not going to carry around loaded weapons anymore, but, since he’s the sheriff of a wide open town, he compromises by carrying an unloaded pistol and relying on his reputation to keep order. 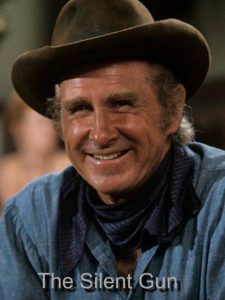 In 1978 he did four episodes of the TV How the West Was Won with James Arness, playing the same character, Orville Gant, and he ended his Western career by appearing in his son Beau’s Western (or semi-Western) comedy drama series Harts of the West when he was in his eighties. 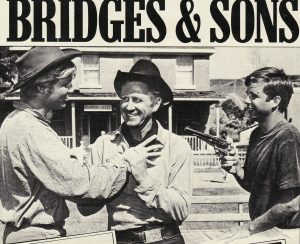 And that was that. Lloyd Bridges reinvented himself in later years as a comedy actor in the likes of Airplane, Hot Shots! and Jane Austen’s Mafia and doubtless these days many people will think first of those roles when Lloyd Bridges’s name is mentioned. But for us Westernistas he will always be the petulant Harvey Pell in High Noon. 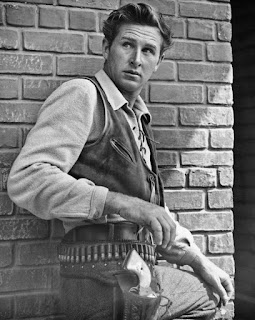 And for me he’ll also always be scuba-diver Mike Nelson, but that’s another story. 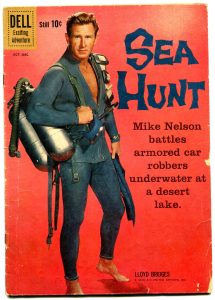