After his success in High Noon, as the 1950s progressed, Lloyd Bridges, about whom we were taking the other day, so click here for that, didn’t find it easy. He was not blacklisted but he had associated with what the right-wing Hollywood types regarded as undesirable elements, other actors they branded as ‘Commies’, and he admitted at the HUAC hearings that he’d once flirted with communism. So there were not too many work offers. He was ready to take roles in smaller films for lesser studios, for example leading for Roger Corman on the minimal-budget Apache Woman. Even before High Noon he had led in 1950 in a Lippert Western, Little Big Horn, as well as the sci-fi Rocket Ship X-M, and very good he was in the oater too, and in 1953 he did so again, in The Tall Texan.

The Tall Texan was indeed a low-key production. It was produced by Thomas F Woods, sometimes billed as T Frank Woods, with distributor Robert L Lippert credited as co-producer. It was one of only four producing credits for Woods, his most ‘famous’ being the later AIC picture The Screaming Skull.

The director, Elmo Williams, the brilliant Oscar-winning editor of High Noon – though this and Fox’s Apache Warrior in 1957 were his only Westerns as director –  seems also to have had a big hand in getting the project underway. He had a 50% of the profits deal with Lippert but used his share to attract decent stars. In his memoir Hollywood: Sooner and Later he recounts that he was given only $102,000 and eight days to complete filming.

Williams went down to Deming, NM where his brother helped out, with a local rancher lending cowboys and horses. When the actors flew in and read the screenplay (they’d signed on the story, not the script) Bridges asked when the next plane out was. The leading lady, Marie Windsor, said, “The screenplay is ridiculous. We want nothing to do with it.” This was the Friday before shooting started on the Monday.

The script was by Samuel Roeca, who wrote four other B-Westerns, but Bridges, Windsor and the other stars Lee J Cobb and Luther Adler (who had all accepted the parts in such a production for similar graylisting reasons) persuaded Williams to hire experienced script doctor Elizabeth Reinhardt, Oscar-nominated in 1945 though this was her only Western, to make it at least bearable. Williams had to persuade Lippert to fly her out from Malibu.

Two days later more problems arose when the Teamsters forced Williams to fire all his cowboys and hire exclusively union labor. Then the rancher refused to allow the unionized ‘Hollywood cowboys’ to ride his horses. And so on. Towards the end of shooting the money ran out. Williams asked Lippert for just a little more but according to Williams in an interview with the Los Angeles Times in 1971, Lippert replied, “‘I don’t care if you have a beginning,  a middle or an end – you’re going to finish the picture now. I’m calling back part of the crew.’ And he did.

So the director had to shoot the finale with one camera, a crane shot with the cameraman in a rope harness suspended from a rock.

But the cameraman was Joe Biroc, a class act, and some of the shots (in black & white, of course) are really good. He was especially effective with his use of shadow. The locations were between Deming and Silver City, dry land made more arid by a severe drought at the time.

Despite all these obstacles, the movie turned out to be pretty good. It’s a gold-lust yarn. These tales were all the rage then, Warners’ The Treasure of the Sierra Madre having started the trend and other studios cashing in, for example Columbia, who put Glenn Ford and Ida Lupino in their Lust for Gold.

A small party is traveling in a two-horse hack. They are an El Paso county sheriff (Samuel Herrick in his only ever movie) escorting an arrested man, the eponymous tall Texan (Bridges, of course) back to El Paso to stand trial for the murder of his brother, though he is innocent, naturally. There’s a man on the make (Dean Train, also his only film) and his grumpy consort (Windsor). We also have a disgraced ship’s captain (Cobb) in a seaman’s cap and good old Syd Saylor drives the wagon.

By the by, True West magazine tells us that “St Louis Police Chief William Desmond dubbed Ben Kilpatrick ‘The Tall Texan’ when the Wild Bunch rider was arrested in 1901 … But he wasn’t really that tall. In 1906, prison authorities measured Ben at 5’11 and 3/8”.  That was taller than Butch Cassidy, who topped out at 5’9”, or Kid Curry who was about 5’7”.  But Kilpatrick was nowhere near guys like Pat Garrett (6’4”) or Arizona lawman Bob Paul (6’7″). But by 1902, many sources were calling Kilpatrick ‘The Tall Texan.’ And so the name stuck.” But the Lippert Tall Texan wasn’t Kilpatrick.

Anyway, back to the story. Along the way they pick up an exhausted Indian (George Steele, four minor roles) who has ridden his horse to death and is pursued by other Comanches out for his blood. So now the party has reached the mystical Western number of 7.

Of course the Comanches attack. The whites drive them off but the wagon crashes and Windsor’s man breaks his neck, so now Cobb and Bridges are free to court her. Which one will she choose? No prizes for guessing that.

A dubious peddler turns up (Adler), conveniently with food and equipment. So now they are back to 7. The Indian offers them a gold nugget for the Indian horse they have captured. Immediately, gold fever infects the group. They will give the Indian the horse if he leads them to where he got that gold from. We know well in advance that there will be trouble, and greed will drive the members of the party to fall out and be generally stupid. It always does.

Actually, all the characters are fairly loathsome. The best of them is the ‘bad guy’, the tall Texan.

Well, they find gold, in a small stream (it was so dry that the crew had to ship the water in by tanker and shut off the flow when filming paused). The locals, Mimbreños Apaches, agree to let them stay and pan if they don’t venture further up the hill, into their sacred burial grounds. Of course the bigger nuggets are up there so the gold-mad whites won’t respect that deal – and will suffer for it.

Such is the plot. It’s quite well handled. Cobb as the roguish captain gave it plenty, as he always did, but managed not to overact too much this time. He has a good bit when he whips a fellow gold-mad type with a rattler. Windsor is (as always) good as the feisty gold-digger who won’t be subservient to any damn males. Syd does his cranky old-timer act. Bridges is best of all as the tough hombre who is going to get that gold and escape the sheriff, come what may, and preferably go off to Mexico with Marie, like John Wayne and Claire Trevor in Stagecoach.

The trailer assured us that there were “a thousand waiting savages” threatening the group but the budget didn’t stretch that far so there were only half a dozen.

You may guess the ending. Yup, that’s right.

I quite enjoyed it, within its B-Western limits. It was well directed and nicely photographed. The acting was certainly up to scratch. It has a noir vibe. It’s a pity Williams didn’t direct more Westerns.

The picture wasn’t a box-office smash, as one might imagine, and certainly couldn’t compete with the likes of Shane, Hondo and The Naked Spur that year, but like most Lippert output it made a profit. It was ignored by most critics.

But you can watch it in confidence, knowing that it has the Jeff Arnold Seal of Approval. 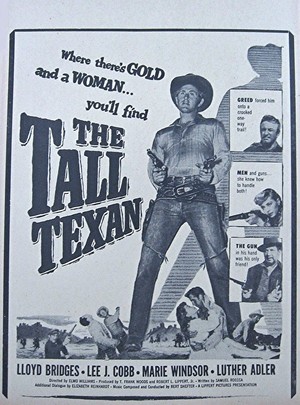