Producer producerNat Holt (1893 – 1971) was best known for making Westerns, first under contract at RKO, then freelancing with various studios, finally moving to TV, particularly on Tales of Wells Fargo, Shotgun Slade and The Tall Man. He worked especially with Randolph Scott, on seven oaters, 1945 – 55, but also used Edmond O’Brien, twice in 1951, in Warpath and Silver City, and again in ’52 (Denver and Rio Grande).

O’Brien (1915 – 85) was slightly stocky and not perhaps the first name that pops into your mind when thinking of Western actors, though he would be superb later in his career as older men, in the likes of The Man Who Shot Liberty Valance, Rio Conchos and, especially, The Wild Bunch. He only made nine Western features in all, doing very well in other genres, such as crime/noir, and he would win an Oscar for his part in The Barefoot Contessa in 1955, but these first oaters, with Holt, were pretty good, and the producer greatly appreciated O’Brien’s huge professionalism. The actor always knew his lines, was never late, had a clear idea of what to do, was athletic – doing many of his own stunts – and he also had ‘it’. In 1949 the Young Women’s League of America, a national charitable organization of spinsters, voted that O’Brien had more “male magnetism” than any other man in America today. “All women adore ruggedness,” said league president Shirley Connolly. “Edmund [sic] O’Brien’s magnetic appearance and personality most fully stir women’s imaginative impulses. We’re all agreed that he has more male magnetism than any of the 60,000,000 men in the United States today.” Who knew?

The LA Times in February ’51 reported that Howard Duff was to star in the project but fortunately that didn’t happen and O’Brien got the lead.

All three of the Holt/O’Brien Westerns were directed by Byron Haskin (1899 – 1984). Haskin had been a cinematographer and special effects expert (Oscar-nominated four times for the latter) who also directed four pictures in the silent days. He returned to directing in the 1940s and helmed the noir I Walk Alone, Disney’s Treasure Island and, in 1953, The War of the Worlds. In the Western genre he only did these three with Holt & O’Brien and a later Walter Mirisch-produced picture with Joel McCrea, but he knew what he was doing and his Westerns have interesting scenes, such as the climactic Silver City fight in the sawmill, and above all pace and action – Denver and Rio Grande is an absolute corker.

Silver City was another movie based on a story by Luke Short. Regular readers of this blog will know what a fan I am of Short novels. Several have been reviewed (see index) and of course several were made into Western movies. They were ideal material for that because they were tightly-plotted, concise tales with strong characters (he was unusually good for the day with strong women roles). They make excellent reading still today. They were also authentic, based on much research, and they often explored one aspect of the West in some depth, such as freighting, ranching or whatever. This one, the 1947 serialized novel High Vermilion, dealt with silver mining. Click here for our review of the book. The picture was known as High Vermilion in some markets. 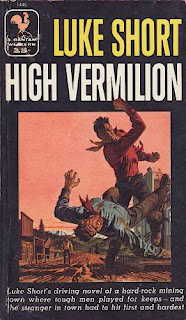 Holt hired Frank Gruber to do a screenplay from the book. Gruber was basically a pulp writer and much of his work was on the more sensational end of the spectrum but he did a good job on Silver City, delineating and developing the characters and keeping this moving at a lively pace.

The movie, as you can tell from the title, sets the action in Silver City, New Mexico Territory (Short tended to use fictional places ‘somewhere in the West’). Silver City was founded in 1870, shortly after discovery of silver ore in the area. It is famous among Westernistas for being the home of the young Billy the Kid, and later Butch Cassidy and his gang frequented the place. Law and order was brought to the town by such old-West peace officers as Grant County Sheriff Harvey Whitehill and Marshal ‘Dangerous Dan’ Tucker. The movie Silver City is certainly a place where law and order is limited. Dangerous Dan evidently hadn’t got round to cleaning up the town yet. 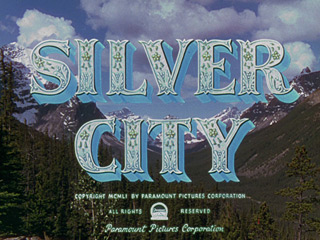 The film opens with two assaying partners, Larkin Moffatt (O’Brien) and Charlie Storrs (Western vet Richard Arlen, then 52, with suspiciously black hair and smooth skin). Moffatt is obsessed with the beautiful but selfish and demanding Josephine (Kasey Rogers as Laura Elliott, who would be promoted to female lead in Denver and Rio Grande). To satisfy her thirst for luxuries, he stoops to dubious dealings, letting on to ne’er-do-wells about the contents of an important assay. This results in a robbery; Moffatt gives chase to the bandits, and recovers and returns the loot, but thanks to partner Storrs, who now marries Josephine, he is fired for theft and drifts from one job to another, with a blackened name. He winds up as an assayer in Silver City.

The town is bossed by rich man RR Jarboe (Barry Fitzgerald, giving it plenty) and his thuggish henchman Taff (Michael Moore, all decked out in slinky gunslinger-black). Jarboe has leased the Big Jay mine, where he has found no silver worth mining, to Dutch Surrency, who, with his feisty daughter Candace, has more luck. They strike it rich, making Jarboe go grrr.

Dutch is played by our old friend Edgar Buchanan, a plus to any Western, though sadly he is underused in this one, has very few lines and is unable to display his talents. His daughter, Candy (with whom we sense immediately that our hero Moffatt will hit it off, and they do) is played by Yvonne De Carlo, replacing first-mooted Rhonda Fleming. “It’s a very real, believable character,” De Carlo said, and I think that’s right.

Ms De Carlo did some dreadful tripe as far as Westerns go, stuff like Salome Where She Danced and Calamity Jane and Sam Bass, but she is really good in this one, and she’d work for Holt again. In Silver City it’s la Elliott who gets to wear all the fancy dresses while Yvonne is seen in pants or a plain dark skirt and shown peeling carrots or rolling pastry. She’s handy with a firearm too, and with her little.38 saves Moffatt’s bacon in a fight with Taff in a hotel. She’s the one who is determined to get the silver out before the lease expires and the mine reverts to Jarboe.

At first Moffatt won’t help. He wants to keep a low profile, so that his past doesn’t catch up with him again, and make a modest living assaying, but when Taff pays lout John Dierkes (it’s a pretty good cast) to beat up the Surrency foreman and put him out of action, Moffatt finally gives in and accepts the job. This brings him into direct conflict with Jarboe and his men.

There’s a good deal of action, with dynamite, fisticuffs, a saloon brawl, murder and attempted murder. It’s well directed and well acted. The scene where the fleeing bandits jump from their horses onto a train carrying huge logs and Moffatt does too, with the resulting fight atop the timber,  and then Moffatt (def a stuntman this time though) swallow-diving off a high trestle into the river, is memorable and very well handled. Ditto the O’Brien/Dierkes final fight in the sawmill, with the bad guys falling out among themselves and everyone shooting everyone else, or so it seems.

There are some familiar faces among the saloon patrons and behind the bar and also among the miners.

The picture is nicely shot in Technicolor by the great Ray Rennahan, using attractive (California) locations. Holt did not stint on this and his production values were always pretty high. There’s Paul Sawtell music, one of those scores that fits the action (dramatic chords with each knife thrust, that kind of thing).

Filming started in April ’51 and the picture was released in December.

In its review the Los Angeles Times said the storyline was occasionally “baffling” but the film was full of “heaps of novel and exciting incidents”. Myself, I didn’t find the plot baffling at all, but then I had read the book.

The picture made $1m. Holt productions rarely lost money, though this one hardly shone commercially (that year MGM’s Across the Wide Missouri made $5.5m and Westerns like Universal’s Cattle Drive, Warners’ Distant Drums and Columbia’s Man in the Saddle all did better).

Brian Garfield in his 1980s guide dismissed it with the one word “ordinary” but I think it’s better than that. I agree it’s not as good as some Westerns that year, in particular the fine Westward the Women, it’s a nevertheless tight little oater, well done. I consider it an enjoyable action Western, with strong characters, a good (if fairly traditional) plot, well written, directed and acted. Certainly worth 90 minutes of your time, and there’s a high-quality Sidonis DVD. 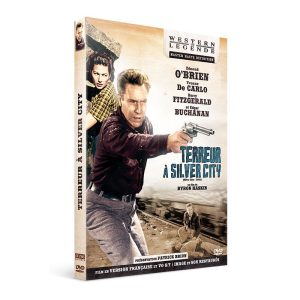