You have to be a serious Western addict to watch it

Donald Barry had his moment of Western fame when he starred as Red Ryder in Republic’s hit 1940 serial The Adventures of Red Ryder (click the link for our review). Because of that success, he became known as Don ‘Red’ Barry, though he afterwards disliked the name and when he came to make his own films, he was always credited as ‘Don Barry’ or ‘Donald Barry’. 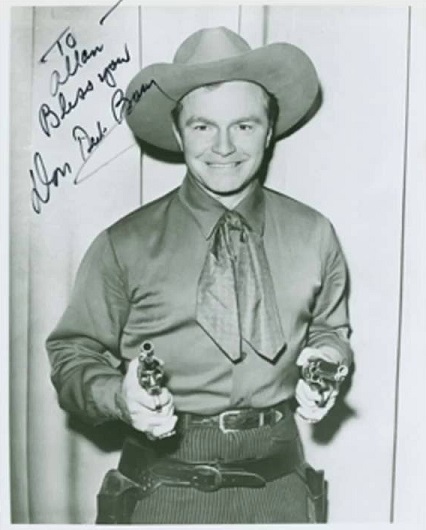 In fact, Barry was a stage name anyway. His parents were Louis and Emma Poimboeuf and he was christened Milton when he was born in Houston, Texas in 1912.

He appeared in many Republic Westerns in the 1940s after Red Ryder, for example eight in 1941 and eight in ’42. Studio boss Herb Yates thought he could be the new Jimmy Cagney, and his short stature and feisty character seemed to suit, but that didn’t really happen. He did the odd war film or crime drama but was consigned mostly to B-Westerns, and even these dried up. By 1950, he was making films with his own company, Donald Barry Productions, but they were lower and lower budget pictures, and were released, after a deal with Robert L Lippert, known as the ‘Quickie King’, by Lippert’s Screen Guild, then Lippert Pictures Inc.

With Lippert Barry made the pretty dreadful picture The Dalton Gang in 1949,  with himself as the marshal after the Daltons, and then in 1950 he tried to cash in on the success of Samuel Fuller’s I Shot Jesse James of the previous year by leading as William Bonney in I Shot Billy the Kid, a 57-minute black & white second feature which featured Lippert regular Robert Lowery (who had been the lead Dalton) as Pat Garrett. It will in fact be our next review, as we return to our Billy the Kid thread (I know you will be thrilled to learn).

The team Barry put together for it, producer/director William Berke, cinematographer Ernest Miller, writer Orville H Hampton and a stock company of actors that included Lowery as well as Wally Vernon, Tom Neal, Jack Perrin and others, would be used in a subsequent series of B-Westerns, and Train to Tombstone was one. Kalton C Lahue, in his book Riders of the Range: The Sagebrush Heroes of the Sound Screen, wrote, “The Lippert Westerns were poorly scripted and badly produced. The youthful Barry of a few years before had been bushwhacked and the fans had not remained around to rescue him.” 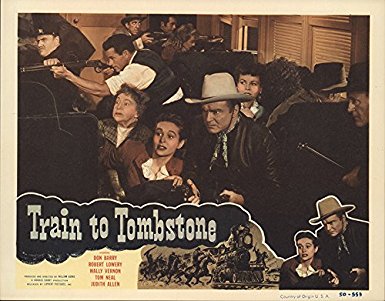 Train to Tombstone was almost a filmed theater play in the sense that it is mostly set inside a railroad car, and has a ‘ship of fools’ plot – although plot might be putting it a bit strongly. We have a handful of characters traveling by train to Tombstone, AZ (which was quite clever as there wasn’t a railroad depot there). The train is carrying a secret cargo (bullion, obviously) and the conductor (Ed Cassidy) welcomes on board an undercover federal marshal (Lowery) because they have heard that a robbery is likely.

The passengers are the fair Doris Clayton (Barbara Stanley), who cannot walk, and her inebriate Aunt Abbie (Minna Phillips). Doris is going to Tombstone to marry her Army lieutenant fiancé. 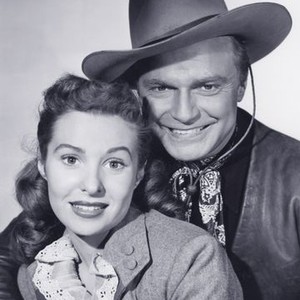 Also on board are a comical traveling salesman, Mr Gulliver, played by comedian/dancer Wally Vernon and providing the comic relief (which we do rather need, to be frank), as well as a rather sanctimonious clergyman, the Reverend Mr Greeley (Bill Kennedy) and a too-good-to-be-true doctor (doctors are nearly always goody-goodies in Westerns), played by Tom Neal. Lastly, of the speaking parts anyway, there are two saloon gals, the more elderly Belle and the younger Marie (Judith Allen and Nan Leslie) going to join a dance hall in Tombstone, much to the disapproval of the reverend.

These characters are ‘established’, inasmuch as the writing, direction and acting permit, before they are joined by Don, leaping aboard from his horse, who kind of takes command. The conductor discovers wanted posters on him in which he is described as a train robber, so that’s pretty obvious then, right? He must be after that bullion. Nope, he’s the hero. He’d probably seen Tom Mix’s The Great K & A Train Robbery back in 1926, in which Tom had posed as an outlaw to infiltrate the gang of train robbers, because Barry’s plot, such as it is, was borrowed from that. The difference is, that was a good film.

Well, you don’t need to be a Western Poirot to guess who the real villain is. After the very static and talky first half-hour, we do finally get some action when first some Apaches and then some outlaws dressed as Apaches attack the train, and the passengers fight them off. This is done, though, with some cursory location footage shown as back-projection through the windows of the railroad car set in the studio. I reckon the whole picture was done on a very modest budget indeed. The DVD Talk review called it “the absolutely wretched rear-projection shots of the Indians attacking the train. Often totally out of perspective with the size of the train and the people inside, Indians move crazily in the background, with the camera moving illogically in relationship to the supposedly forward-moving train.”

All in all, it’s one of those B-Westerns which may have satisfied the largely youthful audience in Mid-West neighborhood theaters but has little discernible merit. I saw a colorized version. I don’t normally care for those but this one had the advantage that the picture quality had been cleaned up, so it’s not bad to look at from that point of view. It is also included in a DVD collection bearing the title Darn Good Westerns, which is stretching it a bit, sincerely.

The music (Albert Glasser) is dreadfully corny and old-fashioned.

Really, this picture is eminently missable but well, you know, you could watch it too, if you were a hopeless addict. 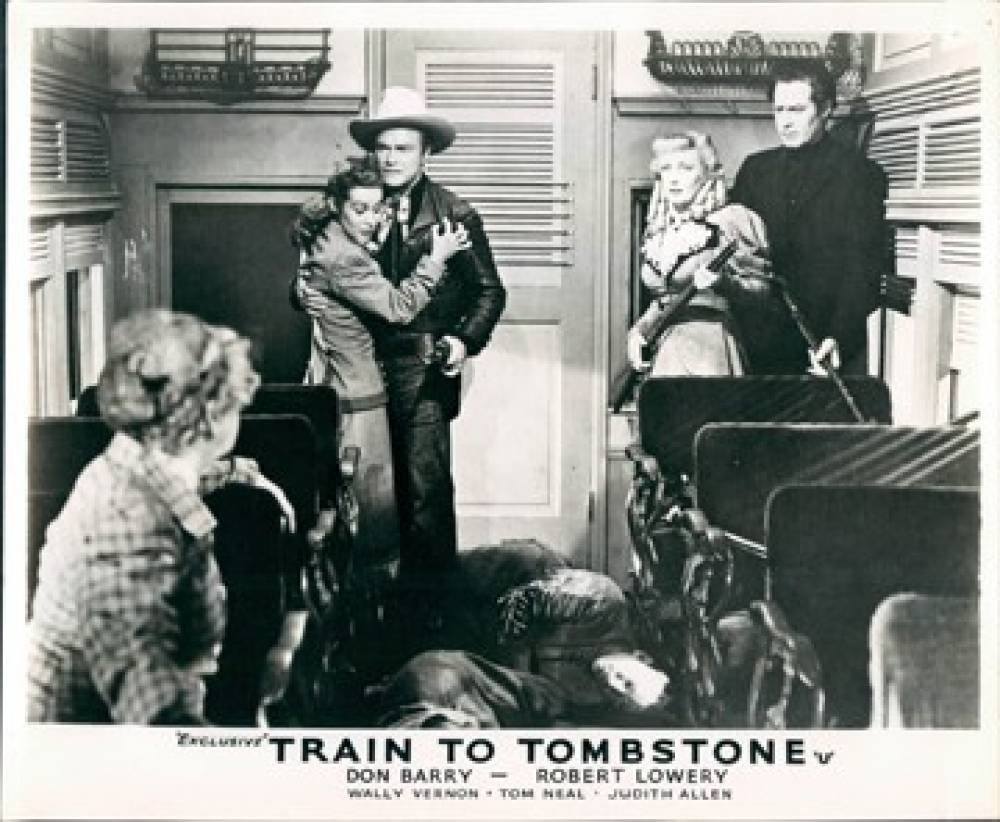 Come back soon for the company’s contribution to the Billy the Kid myth, next up on Jeff Arnold’s West!