Difficult to say which is worse, the writing or the acting

Robert L Lippert had no interest in his father’s hardware store. He was always fascinated by motion pictures. He became a projectionist, working to improve projectors. Gradually, he worked his way up to owning a chain of movie theaters and drive-ins in California and Oregon. But he always resented the inflated charges the studios levied for their product, and around 1948 he decided to go into the movie-making business himself. The first picture he produced, Last of the Wild Horses, starring James Ellison, he also directed. Ellison and several of the other cast members became regulars as he made a whole series of ultra-low-budget pictures for his theaters.

He made sci-fi and horror flicks but most of the movies were Westerns. Just occasionally, there would be a good one. He had Charles Marquis Warren direct two, Little Big Horn in 1951, with Lloyd Bridges and John Ireland, and Hellgate, with Sterling Hayden, in 1952. Samuel Fuller began directing with him, making I Shot Jesse James in 1949 with John Ireland and The Baron of Arizona with Vincent Price in 1950.

But I’m afraid the majority of Robert Lippert films were either poor or indeed downright dire. Bandit Queen was in the dire category. Lippert tended to use directors and writers of the less than super-talented kind. Seven of his pictures were helmed by William Berke. Though he was responsible for some fun programmers as a producer, as a director it would be difficult to say which was the best Western made by the amazingly prolific Berke (he worked on 109 Westerns in one capacity or another). The least awful would be about the best you could name. Gunfire, probably, another Lippert oater. It certainly wouldn’t be Bandit Queen, which was, in all honesty, shockingly bad.

The chief problem was the utterly plodding screenplay, by Bud Lesser and Victor West. It was Lesser’s only feature Western, while West wrote three others for Lippert and Berke – the others, all weak, starring Don ‘Red’ Barry. There was ‘additional dialogue’ by the untalented Orville H Hampton, whose best Western was probably Fox’s Young Jesse James, but it’s only relative.

The script of Bandit Queen is amazingly ponderous and unconvincing, not helped by the way it is delivered by the actors. Poor Barbara Britton is embarrassingly wooden for most of it, though Berke seems to have told her to put some effort in, here and there, because in the odd scene she delivers commonplace observations with tear-jerking emotion. It’s most odd. Still, the script was so bad that even some of the experienced players, the likes of Barton MacLane and Willard Parker, couldn’t have done much with their lines. Some of the scenes are actually quite painful. 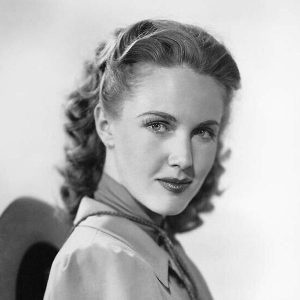 The IMDb bio of Ms Britton says, “Radiant to a tee, well-coiffed and well-dressed Barbara Britton looked like she stepped out of a magazine when she entered into our homes daily as the ‘Revlon Girl’ on 50s and 60s TV. She sparkled with the best of them and managed to capture that ‘perfect wife/perfect mother’ image with, well, perfect poise and perfect grace.” Well, that may be so, but in this picture she was seriously bad. Probably her biggest Western was the 1946 version of The Virginian, the stodgy one, in which she was Molly, but she also did a couple with Randolph Scott. In this picture she is the eponymous bandit royalty, a kind of female Robin Hood. She is the (very unconvincing) daughter of some Spanish grandees in California in 1850 or so who returns home to see them murdered in their hacienda by the henchmen of crooked Sheriff Harden (MacLane) and crookeder town boss Hinsdale (Parker). So she learns how to crack a whip and starts leading a gang of resistance fighters. OK, we all have to suspend credibility to watch Westerns at all, but on this one the suspension required is similar to that involved in walking a high wire over Niagara Falls.

Parker had been in Westerns since a Dick Foran oater of 1937 and had led in the distinctly so-so Renegades in 1946. He would be Jesse James in the cheapo Reginald LeBorg-directed and inaccurately titled The Great Jesse James Raid in 1953, and would play Cole Younger in Young Jesse James. See our reviews of these in the index. He really wasn’t very good in Westerns.

Barton MacLane was a different story, and you can read our appreciation of Barton’s Westerns here. But as I said above, he couldn’t do anything on this picture, not with the direction and script he got.

It’s a Joaquin Murrieta yarn, though a very juvenile version. The bandit queen falls for him, of course. He’s played by Phillip Reed, in a debonair don kind of way. Reed had been Uncas in the 1930s Last of the Mohicans but he didn’t really do Westerns. He was an Indian again in Davy Crockett, Indian Scout.

Even more wooden than Britton was Martin Garralaga, as the friendly Padre Antonio, a sort of Friar Tuck figure. It may have been a language thing but he really did have difficulty in saying his lines.

At one point Ms Britton says, “What a fool I was not to have suspected Hinsdale!” Indeed, Barbara, indeed. But honestly, what a fool you were to do the picture at all.

Unfortunately for us now, though I suppose it was acceptable humor to 1950 audiences, the comic relief is provided by pratfalls by a dwarf (Angelo Rossitto). The whole performance makes you cringe.

It was pushed as Zorro’s Daughter in several markets (La Fille de Zorro, Zorros Tochter, etc) though there is nothing Zorro in the script or plot. 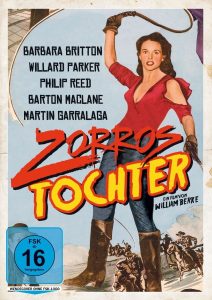 Really and honestly, you would be better off steering well clear of this Z-Western.