Frontier Gun was another of those black & white (but widescreen) Westerns which Regal Films made for Fox. It’s OK. 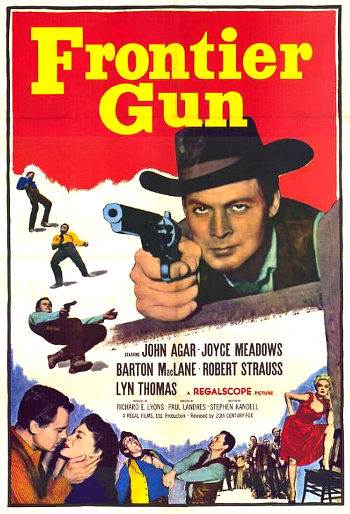 It was directed this time by Paul Landres, who was at Universal as an editor in the 1930s and 40s and directed his first feature film in 1949. He mostly worked in TV but he was involved in 31 feature oaters between 1940 and 1965, twelve as director or co-director – all Bs, though. He worked for Regal’s boss, Bob Lippert, quite a bit, including finishing directing the film, The Last of the Wild Horses, that Lippert himself had tried helming and flopped at. He seems to have known his business, for Frontier Gun is quite well-paced, and decently photographed (by Walter Strenge, who was Oscar-nominated for another of these Regals, Stagecoach to Fury).

The screenplay was by Stephen Kandel, who wrote a lot of TV Western shows but only this and the later Cannon for Cordoba for the big screen. Once again, he did a decent enough job and the dialogue is not risible or plodding.

Together, Kandel and Landres made a Western that the Motion Picture Herald said “moves along with fast pace” and the Hollywood Reporter complimented on its “well-paced action.”

The picture was produced by Richard E Lyons. This and another Regal Western, Lone Texan, were his first, but he would go on to much bigger and better things, producing the likes of Ride the High Country, The Rounders and Death of a Gunfighter.

As for the cast, these pictures tended to be staffed by TV actors and/or those on a downward career path, anyone, in fact who would work for a smallish paycheck.

This one was headlined by John Agar, looking more than his 37 years, it must be said, and not entirely convincing as a ‘kid marshal’. Agar started at the top, with big parts in John Ford’s Fort Apache and She Wore a Yellow Ribbon, with his then wife Shirley Temple, but worked his way down. He later said, “I don’t resent being identified with B science fiction movies at all. Why should I? Even though they were not considered top of the line, for those people that like sci-fi, I guess they were fun. My whole feeling about working as an actor is, if I give anybody any enjoyment, I’m doing my job, and that’s what counts.” Fair enough. 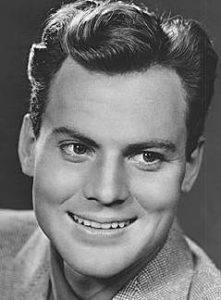 As far as Westerns go, after those great ones with Ford (who bullied him unmercifully) and a couple of other decent ones, he did the AIP B-movie Flesh and the Spur in 1956 and Regal’s Ride a Violent Mile in ’57, so was effectively on the downslope. He was alright. Satisfactory, you might say.

Second-billed was TV actress Joyce Meadows (she only did this and two AIP Bs for the big screen), as the love interest. She is Peg, the daughter of the town’s bigwig (Morris Ankrum, giving it plenty) who is at first rude to the new marshal her daddy has hired but we know it will be lerve, and it duly is.

The ‘other woman’ (there has to be one; it was demanded by convention) is saloon gal Kate, played by Lyn Thomas, who the same year was in Regal’s sci-fi Space Master X-7 (not with Agar, with Bill Williams).

She is the ‘property’ of and is abused by the villain of the piece, a half-breed named Yubo (Western bad guys had been half-breeds since the year dot) and he is suitably thuggish and unpleasant, as played by character actor Robert Strauss, ‘Animal’ in Stalag 17 but not really a Westernista – he only did this and three other features, and this ws his biggest part. Yubo, as is traditional for crooks who have treed the town, owns the saloon.

Good news, though: also in the saloon, in a sort of court jester role, is frock-coated gambler James Griffith, always a joy to see (and a much better actor than many of the parts he got warranted).

In the first reel the town of Honcho’s marshal is murdered, by Yubo’s henchmen it later turns out, and the place has no law enforcement – which suits Yubo nicely. The town council, headed by Ankrum, invites Wild Bill Hickok, Wyatt Earp and Bat Masterson to take the job but they all turn it down – even the great Peter Crayle! Who? I hear you cry. Well, quite. But you see Pete Crayle is one of those deadly clean-up-the-town marshals who has brought law ‘n’ order to a whole heap of places all over the West.

More good news: Crayle Sr is played by third-billed Barton MacLane, about whom I was waffling the other day (click the link for that waffle). He isn’t the new marshal, though. That’s his son Jim (Agar). The trouble is, Jim hurt himself when a six-shooter blew up in his hand and now he’s slow on the draw. As you know, that’s a death warrant for a marshal of a wide-open town. Crayle Sr implores Jim to resign but we all know that ain’t gonna happen, for a man’s gotta do, etc.

So there was the odd name in the cast.

At one point Yubo says, “Sure like to see that marshal staked out on an anthill.” That was an in-joke because that what’s happened to Agar in Flesh and the Spur.

The story tells how the brave marshal, though High Noonishly deserted by the pusillanimous townsfolk and having to go it alone, despite being slow on the draw (whereas the evil Yubo is lightning fast) stands up to the crook, tells him to get out of town by Monday (properly, it should have been sundown, but Monday will do) and wins a last-reel showdown, thereby also winning the hand of the fair Peg. And if you say I’ve seen this a million times before, you have, but me, I never tire of it. If it’s well done, and this one is (reasonably) well done.

Variety called it “a dull item” but I don’t think it was dull. It wasn’t great art, certainly, but it’s watchable alright.

And there’s a good bit when the marshal dumps the saloon gal in the water trough. 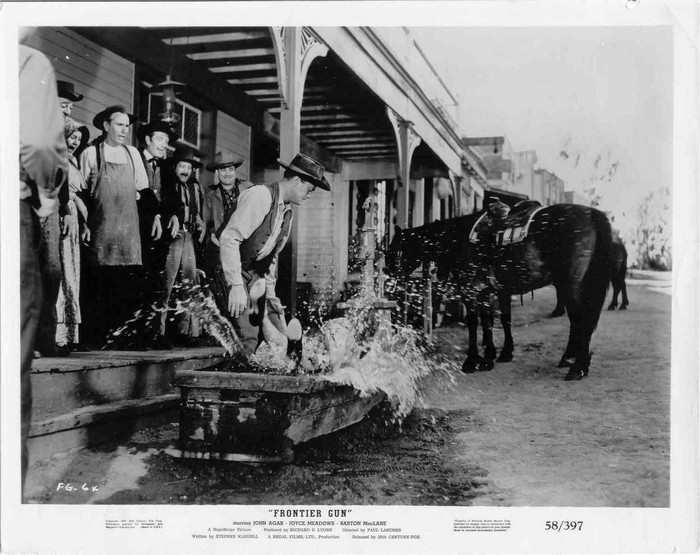