Stage to Tucson, known in some markets as Lost Stage Valley, was a nice color Columbia Western of 1950 that was really tailor-made for Randolph Scott. Randy himself was pretty busy that year, riding The Cariboo Trail, running down the bad buy who stole his Colt .45 and battling Forrest Tucker in the excellent The Nevadan, so although the producer of Stage to Tucson was Harry Joe Brown (about whom we were discoursing last month, so click the link for that) and you would think a priori that Randy would get the nod, the picture actually starred Rod Cameron. 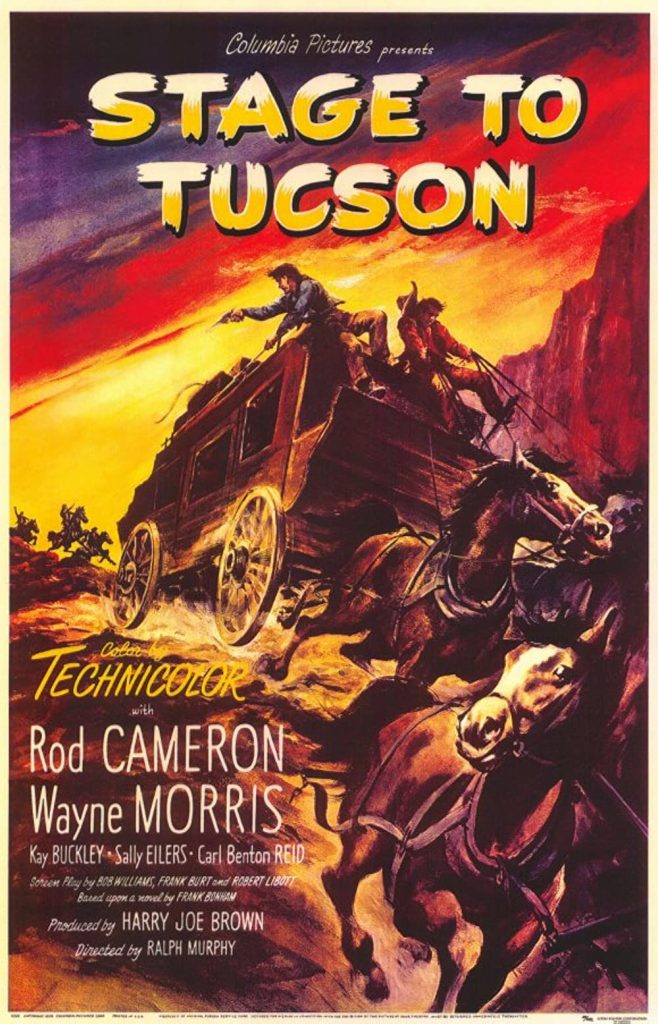 Rod did a good job, even if he was no R. Scott. He’d done pretty well in the late 1940s, co-starring in quite successful Westerns with fellow-Canadian Yvonne De Carlo, and had made a few other oaters as lead which weren’t half bad, such as Panhandle and The Plunderers in 1948. By 1950, when in addition to Stage to Tucson he did Dakota Lil at Fox and Short Grass at Allied Artists, he was emerging as a leading Western actor. He was tall, tough and taciturn, and quite well suited to the genre. 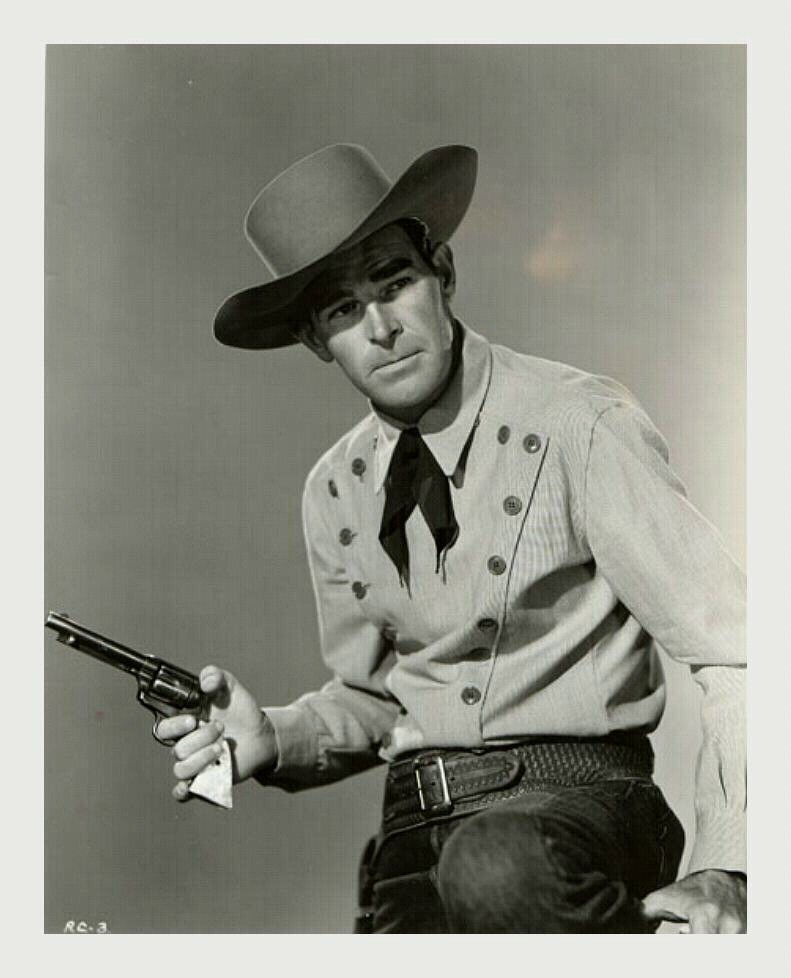 His love interest in this one was Sally Eilers as saloon owner Annie. Ms Eilers was producer Harry Joe’s wife. Although they divorced in 1943, they remained on good terms and she often got parts in his films. This was, however, her last. I say she was the love interest: for quite a bit of the movie our hero dallies with a younger female, Kate, a feisty gal who runs a stage way-station but is given a job as accountant in the stage office in Tucson instead. She’s played by Kay Buckley, who in our noble genre only ever did this and a Charles Starrett Western the same year, also for Columbia. She’s quite perky.

Much is made in the plot of how our hero Grif Holbrook (Cameron) is too old for Kate, and how it would be much better for her to fall into the arms of the handsome young rival, stage driver Barney Broderick (he and Rod get two punch-ups). Now, as Broderick is played by Wayne Morris, who was only four years younger than Cameron and they look about the same age, this doesn’t really work. Randolph Scott had been born in the previous century, and was 24 years older than Ms Buckley, so that would have been more credible. Never mind.

Second-billed Morris had built up a bit of a rep as what the IMDb bio calls “early success as a sunny juvenile”, in Warner pictures such as Kid Galahad, so maybe they chose him for the part because of that, although by 1950 his career wasn’t quite so much on the up, and he was a quite beefy, stocky sort of man of 36 who doesn’t quite convince as the ingénu. He did sixteen big-screen Westerns, leading from 1949 on – he’d been Cole Younger in the Younger Brothers – and he wasn’t bad. He couldn’t really be a top Western goody, though, because he was blond, you see. 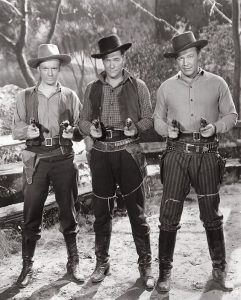 In addition to Cameron and Morris, Eilers and Buckley, we get Carl Benton Reid, entertaining as a scurrilous and alcoholic Reb doc, Roy Roberts as chief villain Jim Maroon (he owns a freight company, and freighters were frequently bad guys in Westerns for some reason but not only that, he shoots a harmless dog named Billy, so he must be bad), and Douglas Fowley gets a smallish part as another no-good. It wasn’t the toppest of top casts, to be frank, and had the picture been headlined by Randy, with, say, Dorothy Malone, as in The Nevadan, it probably would have been a better show. But it still wasn’t bad.

In small parts you can spot Stanley Andrews as a sheriff from El Paso, Roy Bucko as a barfly and Paul E Burns as, inevitably, an old-timer. Harry Bellaver, not the greatest of thespians, I fear, plays a traditional half-breed skunk. In Westerns all those who had the bad taste to be born of mixed race were obviously skunks. This one was the owner of the dog which Maroon shot, and at least he gets to shoot Maroon back in revenge, so that’s one good thing.

The director was Ralph Murphy. Murphy had written a 1931 picture directed by Harry Joe Brown and started directing in the early 30s too, but he’d worked principally on comedies and dramas; he didn’t do oaters. This one and a 1949 Aubrey Schenck save-the-wild-horse picture were his only forays into the genre. He does OK on Stage to Tucson, though, and the picture rattles right along.

The best thing about it, however, is the look of it. The cinematographer was the great Charles Lawton Jr, who would later shoot the stunningly good 3:10 to Yuma and also the best of those wonderful Harry Joe Brown/Budd Boetticher/Randolph Scott Westerns of the late 50s up at Lone Pine, and indeed much of Stage to Tucson too is filmed in the Alabama Hills, and looks marvelous. It was in glorious Technicolor (still quite unusual for mid-budget Columbia Westerns of the time) and the really excellent Sidonis Calysta DVD makes the most of this. The whole film is a visual treat. And the Paul Sawtell music adds to the atmosphere.

One amusing bit is James Griffith as Abraham Lincoln – he’d be Abe three times in his career. He’s curiously seen only from the back and hardly even then, in the opening scene. Westerns often wheeled Lincoln on to give authority to whatever nation-building project was the center of the story, constructing a cross-continental railroad especially but also such enterprises as the telegraph. The fact that Lincoln envisioned it made it A Good Thing. This time he knows that the US really needs a stage line to California because with war looming (this tale is set in 1861, although of course they have 1873 Colts) the Union’s gonna need all that Californian gold, you see.

The fellow he’s explaining this to is John Butterfield (Charles Evans, curiously uncredited as he had quite a big part) and it’s good to see the stage line magnate in a Western now and then. More about him in our article on stagecoaches, click for that. Grif Holbrook works for Butterfield and is indeed his principal tough-guy fixer, and those skills will come in right handy.

Well, there’s a great deal of derring-do and skullduggery, and it’s a toss-up whether the derring-doers or skullduggers will get the upper hand but of course we know the goodies will triumph in the end because they always do. Yakima Canutt was in charge of the stunts. There’s quite a groovy black armored stagecoach which is used by the scoundrels to capture other stagecoaches, for some slightly odd plot reason that the South can win the coming war if it has enough stages. I didn’t really get it but hey.

It was written by Robin Creighton Williams (38 feature Westerns but all on the B side), Frank Burt (who would later work on The Man from Laramie but otherwise wasn’t a Western specialist) and Robert Libott (his only Western), based on a novel by Frank Bonham (this was the only big-screen oater to be made from one of his books).

No great shakes, Stage to Tucson is nevertheless worth a viewing – especially if you can get hold of the Sidonis DVD and have a nice big screen.