This six-episode series is for the moment available on Amazon (though only in the US) and has just finished on BBC TV in the UK, where it was broadcast parsimoniously every Thursday night (all episodes were available earlier on the Beeb’s iPlayer but not if you committed the crime of being foreign). The Amazon showing has the advantage that you can have subtitles, which, even as a mother-tongue English speaker, I found necessary. Whether it was a technical issue of bad sound quality or poor diction of the actors, I often simply couldn’t understand what was said, on high volume or low.

Following isn’t easy for other reasons. The narrative flits between 1875, 1890 and 1903, with frequent flashbacks and flash-forwards (though these are flagged), characters are often not named in the dialogue, so you wonder who they are, and there are other trendy modern-day aspects of the show that render it opaque. I watched it twice, and needed to. Certainly I got way more out of it second time.

Having finally more or less understood it (it could just be that I am dumb, of course) I must say I found it verging on the very good. Certainly, it is a visual treat. From the opening scenes of Episode 1, which reminded me a bit of Unforgiven, complete with Clintish guitar tones, and throughout, there is some quite stunning photography, mostly of Spanish locations (some apparently in Oklahoma), which, with cinematographer Arnau Valls Colomer at the camera, did very well for nineteenth-century Kansas and Wyoming. The photography managed to give us softly-lit landscapes which were beautiful without being cloying or kitsch. As a Western shot in Spain, it made allusions, subtly, to spaghetti westerns. The music (Federico Jusid) occasionally got quite jangly (or Djangly) and the opening credits had a slight cartoonish 60s Italian look to them. Still, there was nothing spaghetti about the quality: The English is infinitely superior to anything that came out of Cinecittà or Almeria in the 1960s and 70s. But it’s interesting how those cheapo rip-offs have become integrated into the history of the Western, almost an essential part of it for later generations.

The English is principally the project of Hugo Blick. When someone writes, directs and produces a show, there are few others to praise or blame – in this case, mostly praise. I suppose he must be an auteur. Mr Blick is an Englishman, and the story is chiefly about English people in the US, or British anyway, and how they adapt, or don’t. Star Emily Blunt, also a producer, plays Lady Cornelia Locke, who travels to America in search of the man she blames for a tragedy that has befallen her. She is a suitably modern (to us) strong woman appalled by the ‘colonial’ realities she sees.

In Ep 1 her path crosses that of a Pawnee ex-Army scout, Eli Whipp (that’s one of his names anyway), played – very well – by Chaske Spencer. Unfortunately, Ms Blunt is a member of that modern school of acting that believes that if you don’t say your lines but instead whisper them loudly, they will be more meaningful and earnest, whereas of course they are just more irritating. 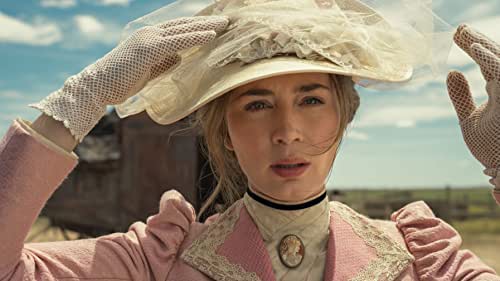 Mr Spencer is not a member of this club and I much prefer that. He speaks normally. 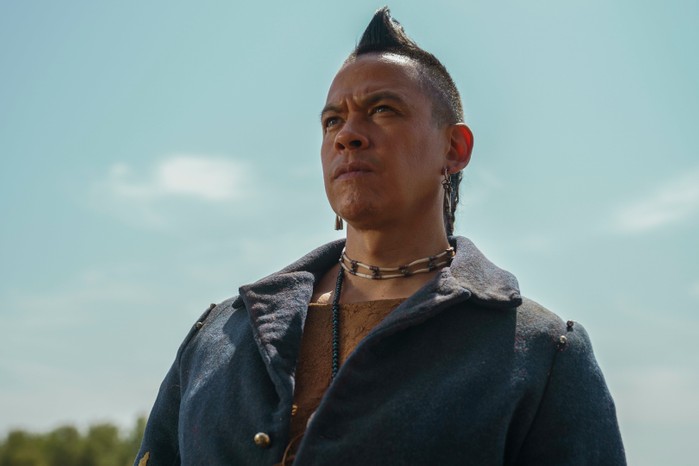 These two will be the central characters of the series, and they do well. The green Easterner out on the prairies (and Surrey really is quite far East) paired with the taciturn type wise in the ways of the West is not a new idea, of course. In fact it goes back to Fenimore Cooper. It was very well done by Jim Jarmusch in Dead Man and now and then there is something of the Nobody character about Eli. Like Nobody, Eli is despised as a savage by the supercilious whites and scorned by the Indians as a sell-out.

Dead Man comes to mind again when we meet Gary Farmer (who was Nobody) as a very disreputable Kickapoo in Episode 2. Mr Farmer is a superbly good actor and this is another of the strong points of this show. Some of the character actors are really excellent. I might especially mention from Episode 1 (though they survive no farther) Toby Jones as the stage driver who is also something of an inventor and Ciaran Hinds as the slimily lethal hotelier (with a derringer). 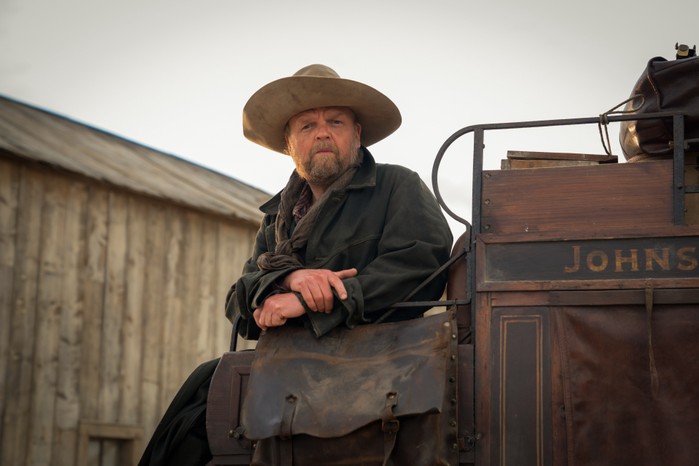 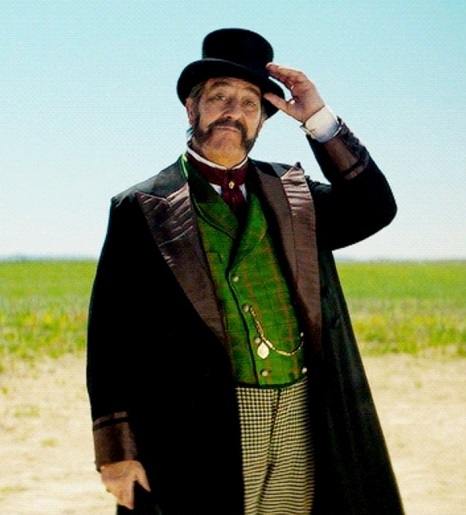 In later episodes both Farmer and his Cherokee wife (Kimberly Guerrero), stand out, as well as Northern Irishman (and sounding it) Stephen Rea as the almost tautologically named Sheriff Marshall, Nichola McAuliffe as the loathsome Black-Eyed Mog, and, in particular, Rafe Spall, son of Timothy, as the principal villain, the utterly repellent Melmont – one of the best bad guys we’ve seen for a long time. 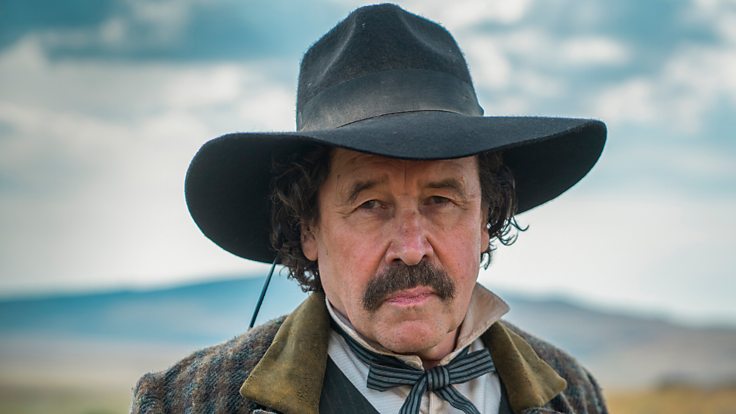 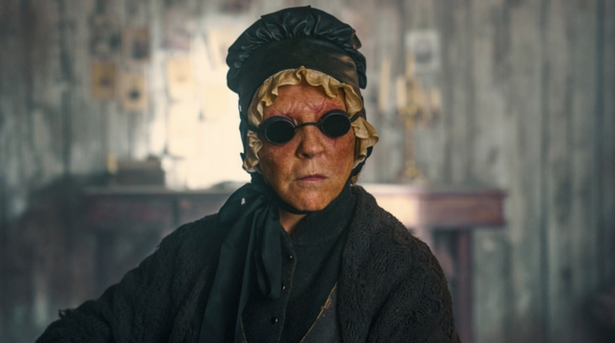 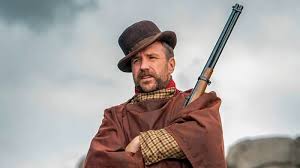 One of the lowlifes is a Captain Clegg but I don’t think he’s the one in Dr Syn or the 1962 Hammer horror.

The West of the 1890s, and especially 1875, is a very violent place where visceral racism and cruelty are rife. Eli has seen it all and is inured to it (“I’ve seen hell and made hell”), while Cornelia is at first shocked by it but adapts rapidly. In no time at all she is wearing a gun belt and hitching up her skirt to run, bringing her markswomanship skills to bear (she was a toxophily champion back in England and has no problem shooting bad guys through with a bow and arrow at a hundred yards). Some episodes do bog down in talkiness, and Episode 5, in particular, suffers from a near-fatal nine-minute hiatus as Eli and Cornelia exchange homespun philosophies under the Colorado stars. But fortunately there is action enough to sustain our interest and maintain the Western credentials. There’s a classic ‘arrogant rancher against sodbusters’ theme, for example. The massacre of the Cheyenne in Wyoming was brilliantly handled, I thought, conveniently (for the budget) not shown, yet all the more grim for the off-stage sound of the fell Gatling gun, and the sight of the returning bloodied perpetrators, with their scalps.

This was no low-budget show, though, and it’s great that there’s still a market for Westerns of this kind, cleverly written (mostly), very well acted (mostly) and superbly photographed (always).

The last episode satisfactorily explains things – and you get to understand a bit more now of what happened in the first. There are faint echoes of Charles Portis’s True Grit when an older Cornelia visits a Wild West show in 1903.

I could have done without some of the contemporary songs.

Daniel Fienberg in the Hollywood Reporter wrote, “If Sergio Leone and Clint Eastwood and their myriad imitators built a body of work tweaking the artificiality of the John Ford Western, Blick has built his series tweaking the artificiality of the revisionist Western. It’s all iconic and it’s all an artistic construct, The English seems to be saying, and if that sounds convoluted to you, you’re not exactly wrong.” However, there are enough genre-references at least to mark this out as a ‘proper’ Western, and underneath the admitted artiness is a basic Western revenge tale with a pair of recognizable heroes at the heart of it.