A B-Western with some quality

The Long Rope is really a B-Western: a one-hour black & white program-filler, cheaply made. But it has interest beyond that, and you might find it worth a look. 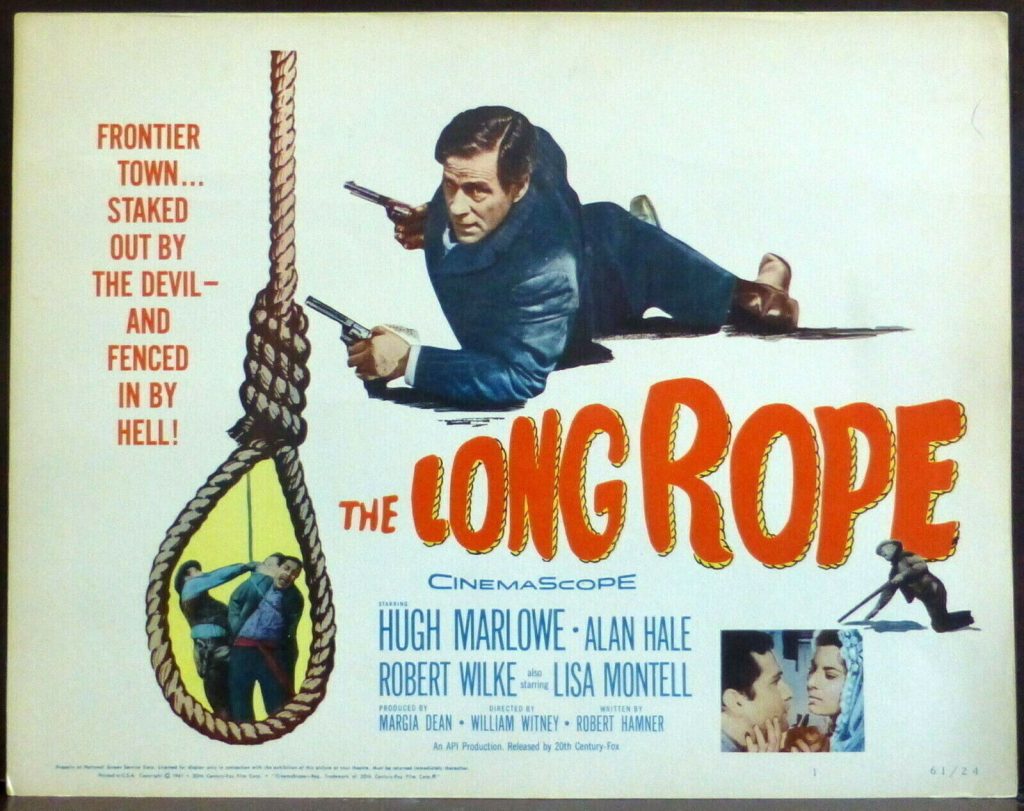 It was an Associated Producers Inc picture. This was the outfit set up by Robert Lippert (click the link for our article on him) in a deal with Fox boss Darryl Zanuck, by which API would make low-budget quickies, for theatrical release (out in the sticks anyway) but principally destined for TV sales. This is pretty well what Lippert had been doing since the early 1950s.

It was actually produced by Margia Dean – this and a low-budget horror in 1964 were her only producing credits. It was, as you know, quite rare for women to produce or direct films in 1950s and 60s Hollywood, but actress Dean was Lippert’s long-time lover and appeared in 17 of his films, and she wanted to do this. Like Ida Lupino (click the link for our article on her), she had to deal with a certain amount of male-chauvinist piggery. It wasn’t easy for a woman to direct men in the macho world of movies but she did it with skill based on experience. And wit: when asked if men resented taking orders from a woman, she replied, “Some do, but I’m the nicest, kindest producer in the business.”

The director was our old pal William Witney. If anyone knew the B-Western business it was Bill Witney. A real vet, he had helmed dozens and dozens of oaters, mostly second-features and serials, at Mascot, then Republic since the 1930s, including Three Mesquiteers flicks, Republic’s Lone Ranger pictures, Red Ryder, a whole slew of Roy Rogers and Rex Allen epics, and so on.

The Long Rope was written (and co-produced) by Robert Hammer. This and another Associated cheapo the year before were his only feature Westerns. But within the limitations of the operation (budget constraints meant that it had to be a ‘town’ Western done on studio sets, with a small cast) it’s actually pretty well done. It’s more of a whodunit than a classic Western: it opens with a murder and we have to guess who the murderer is, being presented with various suspects during the one-hour runtime. There’s a noir vibe to it.

The best thing about the picture, though, is the cast. I’ve always been a Robert J Wilke fan (click for our essay on him) and he was rarely better than in this film. He’s a classic ruthless rancher who wants the whole valley, you know how they do, and who will stop at naught to get it. He’s also our first suspect, for we see him at the murder scene in the first reel, though it turns out his beloved kid brother was the victim so it probably wasn’t Bob. 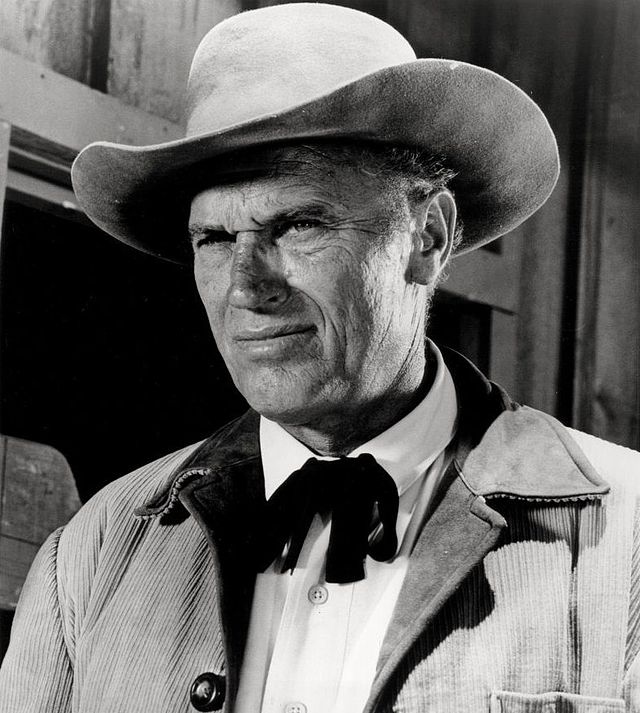 Then the bought-and-paid-for sheriff, who does the ruthless rancher’s bidding, is another old friend, Alan Hale Jr. Long before Gilligan’s Island Alan was gracing Westerns. He was in 23 big-screen oaters between 1949 and 1970. Doubtless you’ll have your favorite. He started in Gene Autry dramas directed by Witney’s pard John English. Myself, I think of him in The Gunfighter, Springfield Rifle, The Indian Fighter and The True Story of Jesse James. He’d played Bob Ollinger and the Sundance Kid. He could do goody and baddy equally well.

The lead was Hugh Marlowe. Marlowe had made an impressive start as chief villain in Fox’s excellent Rawhide, back in 1951, but had thereafter concentrated more on other genres. He had a decent part in the disappointing Bugles in the Afternoon and the interesting Way of the Gaucho in 1952, a more minor part in The Stand at Apache River in ’53, a too-small part in the fine Henry Hathaway/Gary Cooper Western Garden of Evil in ’54 and then two B-movies for Lippert, The Black Whip and this one. It’s a pity he didn’t do more; he was pretty good.

In The Long Rope he plays a judge, come to the town of Tularosa (it’s a New Mexico story of unspecified date but judging by the firearms 1870s) to try the man accused of the murder (unjustly accused, we can tell, but Bob Wilke wants him hanged). This is Manuel Alvarez, played by cinematographer/actor John A Alonzo – Miguel in The Magnificent Seven and DP on Tom Horn. Manuel’s wife Alicia (Lisa Montell, five Westerns) is, it turns out, having an affair with the town’s mayor, Ortega (David Renard), who sent for the judge, so the plot thickens. Alicia’s mother is a proud aristocrat, Doña Vega (Madeleine Holmes) and over the years Wilke has acquired all the huge Vega land grant, leaving the family close to penniless. She’s def a suspect. Then there’s a mysterious gunslinger, Reb Gilroy (Chris Robinson, very early-1960s with his narrow-brimmed Stetson and very low-slung holster). And of course rancher Wilke has henchmen, including another brother (William Kerwin), who is even nastier. He even enters while Alicia is taking a bath, the skunk. There are plenty of potential guilty parties alright.

Hanging, both judicial and lynching, was a common thing in Westerns, and indeed it was pretty common in the historical West. Click here for our essay on that. With the introduction of the electric chair and then the gas chamber, legal hangings declined markedly in the US and the last occurred in 1936 but a slightly ghoulish fascination with them remained, and Western movies made the most of this. This one is no exception, starting with the credits, during which the camera pans down a very long rope to the eventual noose, and during the short film characters pass frequently by the gallows that Wilke has paid to build and they look darkly at it, to somber Paul Sawtell music.

Because Wilke has treed the town, twelve good men and true can’t be found, so no jury is impaneled. Judge Marlowe must try the case himself. Luckily he has Perry Mason-level forensic skills and will uncover the truth about the crime. He has to do this pretty quickly, because the 61-minute runtime was fast expiring.

It was in CinemaScope, shot by Kay Norton, another semi-rarity, a female cinematographer. She went right back to the (now lost) 1930 version of The Spoilers with Gary Cooper, and was DP on The Oregon Trail, Fred MacMurray’s last Western and another Lippert picture.

Considering its limitations, I think The Long Rope is pretty good.