A tense and sophisticated masterpiece

The big adult A-picture Western came back into style at the end of the 1930s, with the Walter Wanger/John Ford Stagecoach notably but the majors contributing with the likes of Jesse James from Fox, Dodge City at Warners, Union Pacific over at Paramount and Universal bringing up the rear with Destry Rides Again. Metro was the only major to miss out. They had the clunkily-titled – and indeed as it turned out clunky – Spencer Tracy effort ‘Northwest Passage’ (Book I — Rogers’ Rangers) in the works but there were considerable delays and it wouldn’t be ready till February 1940. Naturally all the producers wanted to cash in. Big Westerns had them waiting in lines all round the block to get in to the theaters.

In November 1939 Samuel Goldwyn put a rush order on his production of a big-budget Western to be released by United Artists and assigned his star director to the job, William Wyler.

Wyler had actually started in Westerns. After a series of menial tasks working for Universal boss Carl Laemmle (a distant cousin who had given him a job) he became the studio’s youngest director in 1925 when he was put on a series of low-budget programmer sagebrush sagas, silent 20-minute two-reelers, and he dutifully turned out a couple of dozen of them in the late 20s. Then, in 1929, he had made it big with Universal’s first sound Western, Hell’s Heroes, an A-picture which received accolades and did good business because Wyler made a seriously good film from what was, frankly, a pretty tawdry story. But Wyler had greater ambitions – which would indeed be realized – to make dramas and comedies which would bring him fame and fortune. He wanted to get away from the humble oater. He even turned down Tom Mix when the cowboy star came to Universal to make talkies.

Leaving Universal (he didn’t get on at all with the new general manager, Carl Laemmle Junior) he started working with Goldwyn, and did very well indeed with critical and commercial hits such as Dodsworth and Wuthering Heights. So when Sam wanted a top-notch helmsman for a splash-out Western, Willy Wyler was the obvious man, and he said yes.

Goldwyn had Gary Cooper under contract at the time, and he was the obvious choice to star. However, the producer had recently put Coop into two real duds (projects which Wyler also walked out on), The Adventures of Marco Polo and The Cowboy and the Lady, and the star was very wary of another flop. This was especially after reading the script, which was obviously a Judge Roy Bean yarn and Coop was not to play Bean but Cole Harden (typical Western portmanteau name), a Texan drifter who falls into his clutches. Although the excellent screenwriter Niven Busch was commissioned by Goldwyn to beef up the Harden part, which wasn’t in the original Stuart N Lake story at all, and indeed did a good job, Coop was still very skeptical. He only did it because Goldwyn threatened to sue him for the whole $400,000 so far spent on the project if he didn’t. Coop was right to be doubtful, really. The role was essentially as a foil to Walter Brennan’s Bean and any cowboy actor would have done. Brennan as Bean took the honors. It was a great part, very well played by Brennan (a talented actor), and in fact it won him an Oscar – for Best Supporting Actor, though everyone knew he was really the star of the show.

In fact, Coop was brilliant (as he always was, no matter what the role or the film) and his laconic underacted style played excellently against Brennan’s ‘colorful rogue’ antics.

Wyler shot the picture in four weeks with a grueling daily schedule near Tucson, AZ. Goldwyn was pressing for a quick outcome (never Wyler’s forte) but he didn’t stint on resources. Wyler had a budget of over a million. They built a replica of the Fort Davis opera house for the final Harden/Bean shoot-out and for the range war theme they managed to round up seven thousand cattle, the largest herd ever assembled for a movie (though a few years later Red River would eclipse it). There’s an attempt in the screenplay at the serious (but well-worn) theme of ruthless cattlemen for the open range trying to prevent sturdy homesteaders fencing in the land, and there was a spectacular range fire. It was all done, of course, before the days of special effects and computer graphics.

Wyler wasn’t really interested in the big set pieces, though. He thought it was essentially a story of a needling love/hate relationship between Harden and Bean. “There was subtle comedy in there,” he said. Brennan was always up for adding a bit of actor’s business and as for Cooper, Wyler found him a joy to work with. “If you tell Gary that here, after this line, is a chance for a funny look, he’ll get the idea. He’ll do something with that look that no one else can do.” Of course Wyler and Cooper would be reunited later in the Western (well, semi-Western) Friendly Persuasion.

Wyler’s wife Talli, a film actress herself, said, “Cooper would do a scene, and it looked like nothing. He just seemed to stand there like a block of wood. The next night, I’d go to view the rushes. It was incredible. Everything showed in his face. It was all there. He had something special with the camera, really extraordinary.” 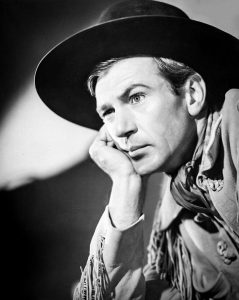 In fact Wyler had wanted to cast Talli as female lead but Goldwyn was intent on having Doris Davenport, who, he believed, had ‘it’. Davenport had been Eddie Cantor’s sweetheart in Goldwyn’s Kid Millions and had been one of the many hopefuls to be Scarlett O’Hara. Later, though, Goldwyn was less convinced of her charms and her career faded. In any case the part of Jane Ellen in The Westerner is pretty well a token female. It’s a very male story.

The film was shot by the great Gregg Toland, with whom Wyler worked so well (they did nine pictures together, including fine films such as Wuthering Heights and The Little Foxes), in luminous black & white, at which Toland excelled. The atmosphere is enhanced by the music. In fact this was one of the reasons for the delay in the picture’s release (it was premièred in Fort Worth, Texas on September 19, 1940): Goldwyn wasn’t satisfied with Dimitri Tiomkin’s score and had Alfred Newman re-orchestrate much of it.

The leading actors were very well supported and especially notable was a young Forrest Tucker, 25, in his first film, already billed fifth and noticeably good as the hothead Wade Harper who gets into a fistfight with Harden. Chill Wills, Dana Andrews (also on debut), Trevor Bardette, Tom Tyler, Stanley Andrews, Jim Corey and more have small parts. It was the last screen role of veteran Fred Stone, as Jane-Ellen’s farmer father, killed by Bean’s men.

Judge Roy Bean was, we know, an appalling character but there is always the temptation to portray him as an amusing old scoundrel, in an Edgar Buchanan TV sort of way. Brennan does well to avoid this. His Bean is a vicious, arrogant, drunken sadist yet you almost feel sorry for him at the end. Of course the picture plays fast and loose with history, and the real Bean was nothing like this, but that’s normal. It was in any case closer to fact than 1972’s The Life and Times of Judge Roy Bean.

In this version Lillie (or Lily) Langtry makes a visit (played by Lilian Bond) and Bean buys all the tickets to her show in order to have her to himself. However, when the curtains open it’s Cooper instead of Langtry on stage and the bullets begin to zing. All rather absurd, not to say surreal. In reality Ms Langtry did visit the ‘town’ Bean had named for her, but only after the judge’s death.

Wyler was ultra-talented and though he drove his actors hard, doing endless takes, he got superlative results. Jeffrey Meyers, in his enjoyable biography of Gary Cooper, calls Wyler “a laborious plodder with an inflated reputation” but in my view this is quite wrong. Even with Brennan and Cooper The Westerner wouldn’t have been half the picture it was without Wyler.

Wyler biographer Jan Herman said that “critics agreed that Wyler had made something unusual, a horse opera that subverted the genre’s conventions. It had shoot-outs, cowboy chases, an epic range war and a spectacular fire. But it was also an intimate character study filled with comic overtones about the peculiar friendship between a hanging judge and the mild-mannered drifter who outfoxes him.”

Bosley Crowther, in the New York Times review of the time, said, “The scenes in which these two friendly and mutually respecting rivals square off are surpassing cinematic episodes—when they slowly and suspiciously fence with cryptic words for bits of information and oppose with no more than attitudes their dominating personalities. These scenes have been directed by William Wyler at the deliberate, suspenseful pace of a Texas drawl and are beautiful to see.” That says it.

Variety said that “Brennan turns in a socko job that does much to hold together a not too impressive script” and listed the plus points of the movie as “good cast topped by Cooper; extended shooting schedule under direction of William Wyler; and eye-filling scenic backgrounds that are accentuated by expert photography.”

Brian Garfield called The Westerner “a tense and sophisticated masterpiece” and I am tempted to agree.