Not so funny these days

Not one of Audie’s best, this Western (the first Murphy made put out by Columbia – in fact his first non-Universal oater) suffers from an implausible plot and clunky writing. It does have its points: visually it’s attractive, with bright Technicolor footage shot by the great Ray Rennahan around Old Tucson, in saguaro country. It’s supposed to be Texas, and I never saw a saguaro in Texas, but never mind, it’s pretty, and it’s ‘Western’.
.
. 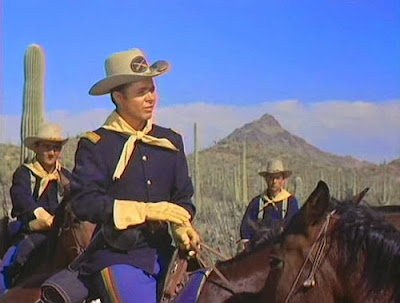 The screenplay was by Walter Doniger, who specialized in military subjects and also directed a good number of Western TV shows, his second of only two big-screen oaters after (the also undistinguished) Along the Great Divide. It was based on a potentially interesting story by C William Harrison, who wrote up to 1200 novels, non-fiction books and pulp and slick magazine stories, often under the name of Will Hickok. This was the only one made into a movie as far as I know. 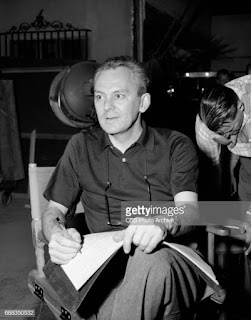 It is, at least peripherally, a Col. Chivington/Sand Creek Massacre story. This horrendous episode, which took place in Colorado in 1864, is one of the most shameful in American history but it is dealt with here in a manner that is frankly perfunctory. In unbelievable dialogue in the opening scenes, Chivington (Ainslie Pryor, bizarrely uncredited), who is for some reason a regular Army officer, announces “We’re marchin’ on Sand Creek!” and Lt Frank Hewitt (Audie Murphy) replies, “You can’t do that!” It’s a twenty-second dialogue written by a ten-year-old. We are shown short, cursory and low-budget scenes of Chivington’s men massacring Indians, who fall when shot in old-fashioned B-Western style. It is all essentially a cheap trivialization of the Sand Creek Massacre in poor taste. Lt Hewitt isn’t there; he has been confined to quarters for insubordination. But he ignores that, becoming effectively a deserter, and rides to Texas (don’t ask me why) to warn them there against the Comanches on the warpath. Yes, I know, they were Cheyenne at Sand Creek but Comanches are more Texan, I guess. 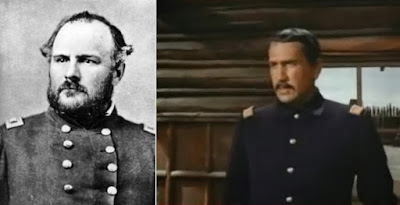 Anyway, the whole Sand Creek business goes away for most of the movie, resurfacing, again in an off-hand way, in the last reel. The film now becomes a siege Western with brave whites fighting off generic and nameless savages, as in countless old-style Westerns of yore.

It transpires that Lt Hewitt is a Texan (well, it is Audie) and yet his uniform is blue, so he is regarded with scorn by the inhabitants of Jonesville when he gets there. They are nearly all women, the menfolk having left to fight on the Confederate side. One is Stella (Patricia Livingston), Hewitt’s ex, who up and married another fellow in pique when he left. Another is sassy youngster Anne Martin (second-billed Kathryn Grant) who secretly fancies him. And there’s a formidable three-times widow, Hannah (Hope Emerson, the most entertaining member of the cast, 6′ 2″ and 230 pounds, also excellent in that wonderful Western Westward the Women). The hostility of these women turns to grudging respect, then outright loyalty and admiration, as they and the lieutenant face danger together. That’s the plot. 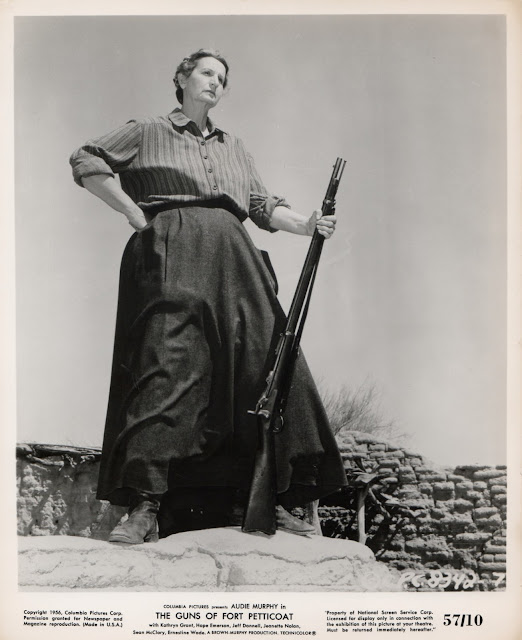 The lieutenant trains the women up, much as the gunmen were to do to the Mexican villagers in The Magnificent Seven three years later, teaching them how to shoot and preparing the ground for the coming attack. As in The Mag Seven there is an inexhaustible supply of enemies for the defenders to shoot down. The training scenes doubtless gave rise to much hilarity for the 1950s audience as Audie yells to the women, “Come on, men!” and the ladies hitch up their skirts ready to charge. In that innocent, pre-feminist day, audiences (male and female) could chuckle at the incongruity of ladies doing drill and shouldering arms. All this aspect is rather less funny these days. 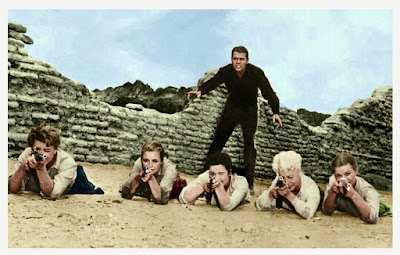 Many of the women have late-model Winchesters, which was clever for 1864. Perhaps they were advance prototypes.

There’s a louche blonde saloon woman who plays the piano, Lucy (Peggy Maley) and a posh Virginian lady (Isobel Elsom) with a Negro maid (Ernestine Wade). There’s also a very tiresome religious nut who nearly gets them all killed and gets a young boy shot (not sure who she was). The boy (Kim Charney) is also tiresome, a bit of a brat. He probably deserved to get shot. The writers were trying to differentiate the women a bit, I guess, so that characters stood out. They partially succeeded. 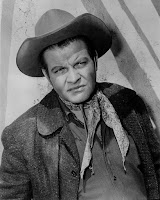 McClory is the Irish scoundrel

There is one man left in Jonesville, the slimy Emmet Kettle (Irishman Sean McClory). He has got one of the women pregnant and she is desperate, but he is just using her. Locked up by the lieutenant in the mission for trying to escape and stealing the officer’s horse, he blarneys the girl into releasing him and makes a run for it. In an abandoned farmhouse he comes across three outlaws. Good news: they are James Griffith, Ray Teal and Nestor Paiva. Excellent! Cruel, laughing villain Ray, wonderfully good as always; portly, cowardly, smiling Mexican, Nestor, always entertaining; both led by runty, unshaven, frock-coated ruthless murderer James, cadaverously classy. All three are quite ready to sell the women out to the Indians (would probably cheerfully sell their grandmothers) to save their worthless hides, which they do not. They are very villainous indeed and better news still: Griffith does Kettle in with a derringer. He does it smilingly, while the victim is tied up. Ooh, that’s bad. These outlaws are soon killed off by the Indians and they are a bit extraneous to the plot, but I thought it was the best bit. 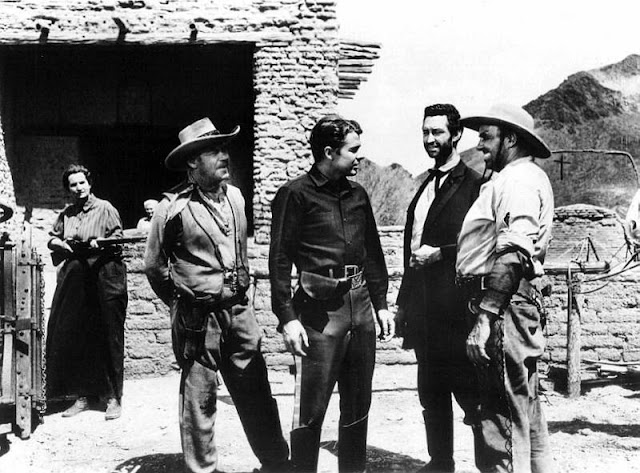 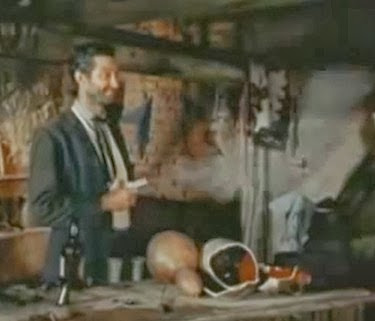 James Griffith not only uses a derringer: the man he shoots is tied up

Lower down the cast list I spotted Charles Horvath as an Indian chief (he often did that), John Dierkes as a storekeeper (how tall he was!), Francis McDonald as Col. Chivington’s aide and Al Wyatt as a sergeant. They had almost nothing to say but it’s good to see them. Charles and Al also did the stunts, of course.

The picture was directed by George Marshall, certainly a big name as far as Hollywood helmsmen go, though probably more comfortable in the world of the comedy Western. He made Destry twice after all – Destry Rides Again in 1939 and Destry in 1954, the latter also with Audie – and had been making funny Westerns since Love’s Lariat in 1916 with Harry Carey (that’s going back a bit). Fancy Pants with Bob Hope, The Sheepman (a favorite of mine) with Glenn Ford and Advance to the Rear with Glenn again, he really did comedy Westerns.

The serious ones he made were less good – The Savage, Pillars of the Sky, his segment of How the West was Won, these weren’t too hot. Fort Petticoat does have its comedy moments but is basically played straight and you sense that Marshall wasn’t really in his element. 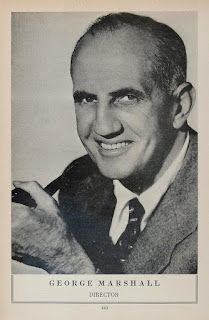 It was produced by Murphy with Harry Joe Brown, and was no cheapskate affair. It had Marshall at the helm, Rennahan as DP, music by Mischa Bakaleinikoff, and a goodish cast. It’s just a pity they didn’t get a better script. It was supposed to be the first movie of a three picture collaboration between Murphy and Brown but they seem to have fallen out and the other two never got made.

Audie is rather bossy. Almost a nag. He bravely captures the Indians’ medicine man and they rather gruesomely hoist up his corpse on the ramparts. This makes the Indians lose heart and they gallop away. 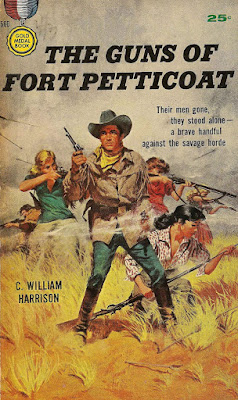 Audie has to go back to Colorado to face the music. He has deserted and, as you well know, a man’s gotta do what a man’s gotta do. But the ending is too pat, Audie is saved by a deus ex machina (a nameless general) and the gals come in to free their commander, Chivington is arrested for the massacre and all’s well that ends too well, I’m afraid.

No, it’s not one of Audie’s best. At times it verges on the bad. But it does have its points. World War II was a fresh memory in most of the spectators’ minds; women had played a vital role in the American war effort and people were beginning to think differently. Perhaps there was a proto-feminist message in the film after all. Women unite and beat men at their own game.

And I’ll watch Audie in anything. Happily, though, Audie rode back to Universal the following year and made the rather good Ride a Crooked Trail.