The comedy Western is hard to get right but when it does hit the right notes, it can be a delight. This one has a brilliant performance by Glenn Ford as the sheep farmer, Leslie Nielsen playing it (almost) straight as the bad guy cattle baron, and a (this time) understated Shirley MacLaine as the female lead, the cattle baron’s girl who falls for the sheepman. They are very well supported by Mickey Shaughnessy as the dumb tough guy Jumbo and an outstanding Edgar Buchanan in one of his finest ever roles as the smartass village character, Milt. We might add Pernell Roberts, later of Bonanza, as an excellent evil gunman, Choctaw, though his part is sadly very short. He fires seven shots from his six-shooter but in a comedy he’s allowed. 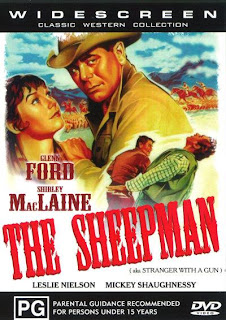 But it’s not only the good acting. The Oscar-nominated screenplay, by William Bowers and James Edward Grant, manages the very difficult trick of being a straight drama with menace, and at the same time a wickedly funny story of a man introducing sheep into cattle country. In some ways it’s not a comedy Western at all, yet it is hugely funny. 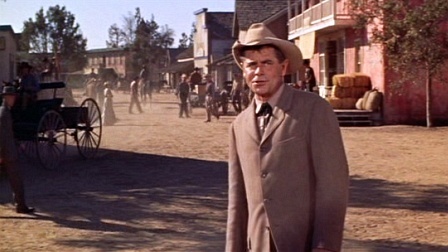 .
It was one of the last of the fifty Westerns George Marshall directed and one of the best. He had done supremely well in this genre, of course, with Destry Rides Again in 1939 but hadn’t really done much of note comedy-Western-wise since. He certainly came up trumps in 1958. It’s short (85 minutes), tight and pacey. And huge fun.
Robert Bronner was not a famed Western cinematographer and was more renowned for romantic comedies (Ten Thousand Bedrooms, Silk Stockings, that kind of thing). He hadn’t done a Western before (unless you count second camera on The Harvey Girls) and wasn’t to do one after either (unless you count 7 Faces of Doctor Lao, which I don’t) but he does a fine job with the lovely locations in this movie and the swirling sheep herd. It looks like Wyoming in the fall, though I don’t know where it actually was. Somewhere round behind the MGM studios, probably.
.
. 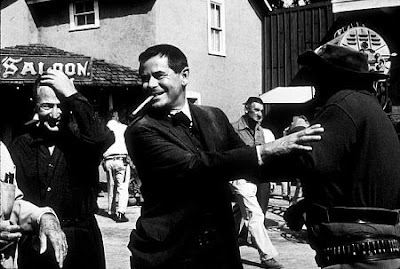 .
The score is maybe the only weak point. Jeff Alexander (his work on Escape from Fort Bravo was superb) descends to annoyingly ‘comic’ music at times, although there are also some pleasant pastoral passages.
Tragically, Slim Pickens, as the cowardly marshal who goes fishing whenever trouble brews, has a tiny part. Would that it had been developed.
.
. 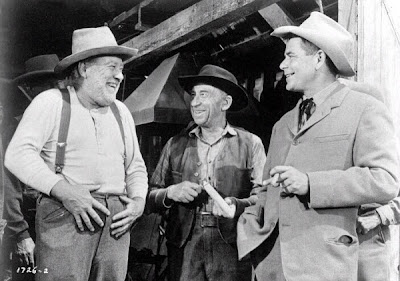 .
Glenn Ford, Canadian-born but to all intents and purposes a true Westerner, was one of the best ever cowboy actors. He sat a horse so well, he had grit, and he was totally convincing as the taciturn tough guy. He also had a fine talent for comedy, as this film proves.

His Jaxonbilt from the movie was recently auctioned for $ 1920. Wish I’d known, I’d have bid.

The Sheepman is a terrific movie. It’s a must-see and a must-chuckle.
.
. 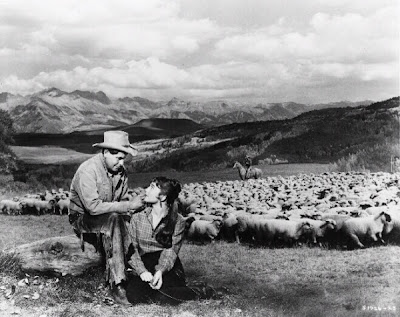