The series of Paramount Westerns starring Randolph Scott, co-starring Noah Beery and Harry Carey, with Buster Crabbe, Barton MacLane and Guinn ‘Big Boy’ Williams in the cast too, directed by Henry Hathaway and photographed by Ben Reynolds, based on a story by Zane Grey all had a pretty nice line-up. Those are strong credentials. And indeed, the pictures were really quite good for the day.
The weakest of them, though, and the most routine of these 57-minute programmers was Man of the Forest.
.
. 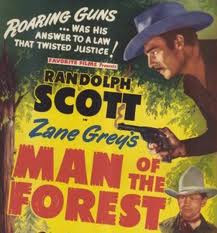 Sounds like a dangerously anarchist slogan for 1933
.
The whole thing is desperately old-fashioned and resembles a two-reeler silent but with words. It’s not surprising that it does, though, because a lot of footage of a previous Beery/Carey silent movie was used. It’s not helped by the fact that the surviving print is grainy and scratched and the sound is crackly and it jumps.
.
. 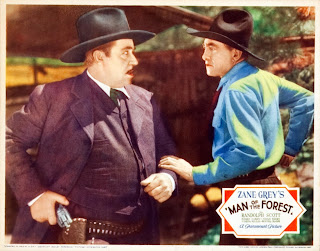 Noah and Harry (Sr, obviously)
.
The Zane Grey tale Man of the Forest had been filmed twice before, in 1921 and 1926, and it was common for the studios in the early 1930s to dig out old silent programmers and remake them as talkies, using a lot of the old movie to save on production costs.
The 1933 version, written by Jack Cunningham and Harold Shumate, and almost unrecognizable from the novel, tells of a mountain man (Scott) who lives in the forest with a pet cougar called Mike. Villainous Noah Beery (Sr, obviously) is after the water rights of Randy’s good friend Harry Carey (Sr, obviously), who can’t register them officially because he has a criminal record. Harry’s plan is to register them in the name of his niece Alice (Varna Hillie, looking incredibly 1920s) but of course Noah and his thugs, led by Barton MacLane, with crooked Sheriff Tom Kennedy, will stop at naught to prevent that.
.
. 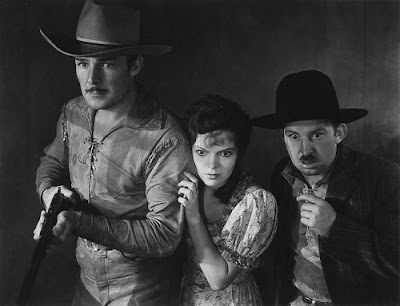 Dig Randy’s mustache
.
Kidnapping, gunfights, arson and, of course, cougar-maulings are on the menu as Randy saves the day (I am giving nothing away here) and gets the girl.

Actually, on the set the cougar had a go at Scott. They let the cameras roll, though, as it was a good take. They also left in the bit where the mule kicked Williams in the rear end.

Scott has a surprising caddish black mustache, which would more appropriately have adorned the face of the villain. This was because his predecessor in the silent version, Jack Holt, had one and he needed to look similar so the re-used footage would match. For the same reason the blonde Verna Hillie had to wear a brunette wig. 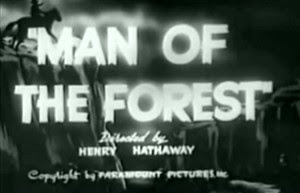 .
Vince Barnett is ‘Little Casino’ but I don’t think he’s related to Billy the Kid. Buster Crabbe and Big Boy Williams, who are on Randy’s side, have a running gag with a mule. Randy spanks the girl when she pulls a gun on him.

The earlier Buffalo Stampede was a much better movie than this one.

All in all, I fear that this Randolph Scott Western, his fifth of 61, is eminently missable.

Unless you are heavily into mountain lions.