.
.
L’Amour on top form
.
.
I have long had a dream of building a proper Western town. Wooden buildings with false fronts either side of a dirt street, boardwalks with ramada, hitching posts. There’d be a saloon, a barber shop, a general store, a livery stable, marshal’s office and jail. Forge. Hotel. You know. People would come to stay, renting Western costume. It’d be Westworld without the robots.
Oft have I mulled over this project. I’m sure it’d be a success. I might build it in France. Somewhere hot and dusty in the south.
Imagine, then, my shock to read just today in Wikipedia’s entry on Louis L’Amour that:
During the 1960s, L’Amour intended to build a working town typical of those of the nineteenth-century Western frontier, with buildings with false fronts situated in rows on either side of an unpaved main street and flanked by wide boardwalks before which, at various intervals, were watering troughs and hitching posts. The town, to be named Shalako after the protagonist of one of L’Amour’s novels, was to have featured shops and other businesses that were typical of such towns: a barber shop, a hotel, a dry goods store, one or more saloons, a church, a one-room schoolhouse, etc. It would have offered itself as a filming location for Hollywood motion pictures concerning the Wild West. However, funding for the project fell through, and Shalako was never built.
Isn’t that really annoying when you discover a brilliant idea you had has already been thought of? Oh well. I consoled myself with that old dictum that great minds think alike. Louis and moi. I was glad, anyway, that Louis wanted to name it Shalako.
Seven of Louis L’Amour’s Western novels were set in New Mexico. Shalako was, as you know, made into a movie by three independent producing companies in 1968, directed by Edward Dmytryk and starring Sean Connery. It didn’t get a very good press – in fact people have been quite rude about it – but I always thought that although it had weaknesses, it was quite good on the whole, and Connery was surprisingly convincing as a tough Westerner.
.
.

Sean Connery as Shalako
.
I re-read the novel the other day and I must say I do think it was one of the author’s best. L’Amour wrote tightly constructed little Western tales which, I think, got better and better. They had an authentic ring to them as well. No wonder many made good movies. Hondo, The Tall Stranger, Crossfire Trail, Guns of the Timberlands, Apache Territory, The Burning Hills, among several others, were turned into Western movies, big-screen or small (one even a British spaghetti, if you can imagine such a thing) but sometimes big studio productions with top stars.
The story of Shalako concerns a hunting party of rich Europeans that has come out to New Mexico in 1882, just when Chato and his Apaches are on the rampage. This is distinctly realistic because by the 80s many such parties were out in the West touring and hunting and wanting to see the ‘authentic’ Wild West, even if they did it with servants and linen tablecloths loaded with silver and crystal. This party is led by severe Prussian Baron General von Hallstadt and his fiancée, Irina, Lady Carnarvon, a British aristo. They are accompanied by a US Senator’s daughter, a diplomat and his wife and a French soldier. They have, however, hired disreputable, low-life guides and crew.
.
. 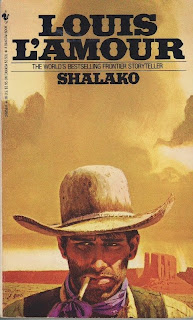 Fun paperback
.
Shalako Carlin is riding alone up from Sonora on rarely-used trails. He is one of those proper Western heroes who rides alone. He seems more than half Apache himself because he knows their ways and their language and their survival skills. He is tough and brave.
But L’Amour drops little hints here and there that Shalako isn’t just a rude Westerner. He has read the great military texts and his conversation, spare as it is, contains the occasional classical allusion. There’s more to Shalako than meets the eye…
.
. 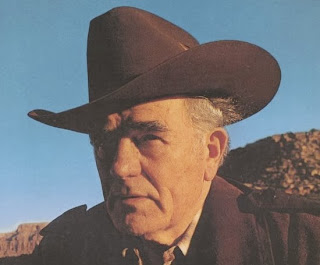 Louis
.
We are told that he takes his name from the Zuni rain god because whenever he appeared among them, it bucketed and those Indians laughingly gave him the soubriquet.
Well, of course the Apaches attack and of course Shalako saves the dumb Europeans, though by no means all survive. And Shalako has a final clifftop duel with the feared warrior Tats-ah-das-ay-go or Quick Killer, the deadliest of all the Apaches. One of them wins.
And guess what, Shalako and the noble Irina hit it off.
.
.
Chato, by the way, was a real person. He was a Chiricahua Apache warrior, a protégé of Cochise, who carried out several raids on settlers in Arizona in the 1870s. He surrendered in 1872 and was confined to the San Carlos reservation where he became an Army scout. But in 1882 he broke out and with others settled in Mexico. However, General George Crook attacked his ranch in June 1883 and Chato surrendered, with Geronimo, to Crook. He then served under Crook as a scout, including the subsequent expedition into the Sierra Madre after his erstwhile ally Geronimo in 1886.
.
. 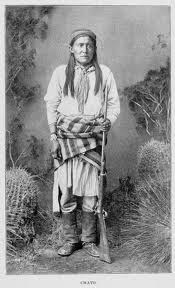 In 1894 Chato and his family moved to Fort Sill, in Oklahoma, and in 1913 they opted to go out to the Mescalero Reservation in New Mexico. In 1934 Chato died in an auto accident when his Model T went off the road.
Like Shalako and Tats-ah-das-ay-go on that clifftop, the novel does occasionally just teeter on the brink of pulp.
.
Lean as a famine wolf but wide and thick in the shoulder, the man called Shalako was a brooding man, a wary man, a man who trusted to no fate, no predicted destiny, nor to any luck. He trusted to nothing but his weapons, his horse, and the caution with which he rode.
Well, maybe not pulp exactly but slightly melodramatic stuff.
I’m not sure modern feminist readers would like it too much. In 1962 feminism doesn’t seem to have yet had much of an impact on certain Western writers.
– You love your horse.
– Horse is like a woman. Keep a strong hand on the bridle and pet ‘em a mite and they’ll stand up to most anything. Just let them get the bit in their teeth and they’ll make themselves miserable and a man too.
Yes, well.
While earlier American writers could handle the difference between the verbs lay and lie and raise and rise, L’Amour (and most authors since) couldn’t, so these are occasionally confused.
.
. 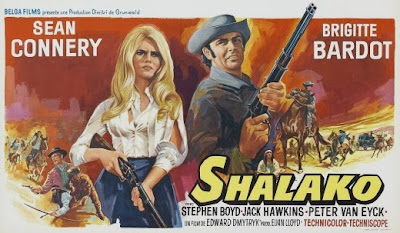 Flawed movie but better than many have said
.
There’s the odd historical reference, such as Shalako’s to the Fetterman fight of December 21, 1866, to illustrate the dangers of underestimating Indian foe.
A false note is struck towards the end when Shalako’s shirt is torn with knife cuts in the fight and is then in rags, to be torn off, just like all those sub-Indiana Jones or Tarzan B-movies of the 50s. An interesting example of movie imagery feeding back into novels.
But these are cavils. All in all, Shalako is a fun read and a good 165-page paperback with which to pass an enjoyable afternoon.
.
PrevPreviousTelling Western Stories
NextLightning Jack (Savoy Pictures 1994)Next