.
.
Weird but it works
.
.
In some ways The Sheriff of Fractured Jaw was the bizarrest Western ever. It brought together Raoul Walsh, dashing eye-patched director of some of the most famous (and rip-roaring) Westerns of all time; blonde bosomy bombshell Jayne Mansfield, a sort of poor man’s Marilyn Monroe; and Kenneth More, a posh British actor who had been noble with Scott in the Antarctic and on the Titanic, had driven a veteran car from London to Brighton and had appeared in various other ‘comedies’ that the Brits found funny such as Carry On London and Doctor in the House. What a combination.
.
.

Who would have thought it?
.
There was a reason. The British had passed an astute if protectionist law that forbade foreign film companies to export the profits of any movies made in their country. As a result, Fox had money tied up in the UK that it could only use making another film there and so in some (financially unlearned) execs’ eyes, Fractured Jaw would be essentially free. Fox therefore hired a well-known British star or two, shipped over Walsh, Mansfield and some character actors, set up in England with British technicians and shot a few scenes of the wide open West country.
.
. 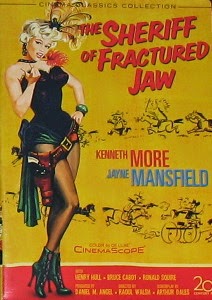 Despite the poster, it’s a good film
.
Amazingly, it worked. Fractured Jaw was a very funny Western which is a delight to watch.
The story opens in England where Jonathan Tibbs, the aristocratic nephew of a pompous and stupid lord (Robert Morley) finds that his family company, which sells sporting guns, is on the verge of bankruptcy, so he sets off to the land of opportunity to sell large quantities of firearms to those that love them best, the Americans. Arrived by stage in the Wild West (another passenger, a drunk, was well-known star of the Carry On comedies Sid James) he subdues the Indians who attack by hooking the chief’s tomahawk arm with his brolly and telling him to “run along now, there’s a good chap”, and is greeted as a hero in the rough town of Fractured Jaw.
.
.

I say, my dear fellow, this really won’t do
.
This town is run by the pusillanimous mayor, Henry Hull in a top hat, hamming it up as usual.
.
.
.

Mayor Henry Hull caves in to cowpokes
.
.
The saloon owner, Kate, played by Mansfield, is one whom all the townsmen lust after yet respect. She’s not only curvaceous and sings (songs for morons) sweetly – she mimed to Connie Francis’s voice – she’s also damn handy with a Colt. Well, actually, she’s hopeless and can’t even hold it right but an off-camera marksman hit some targets for her. Ms Mansfield had a couple of points in her favor but really was not exactly Sarah Bernhardt. She had a bigger bust than Marilyn but only half the acting talent. Still, she says her lines dutifully.
.
. 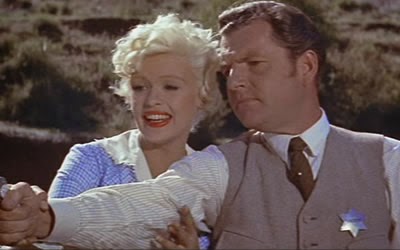 The shooting lesson: he’s distracted
.
Tibbs wows the townsfolk and us Western gun-loving spectators as he cows the cowboys with a device that catapults a hidden sleeve derringer into the hand. We’ve seen these before, of course; gamblers often have them in Westerns. Think of Slick in Silverado as an example. But we get this one in great and glorious detail. The movie’s worth watching just for that.
.
.
.

One of the best ever derringer movies
.
The film is nicely pro-Indian. There’s a range war going on between the Lazy S and the Box T: all the white men bar Tibbs, now sheriff, are cowardly skunks. One of them is Bruce Cabot, Errol Flynn and John Wayne’s drinking companion and veteran of 29 Westerns from Scarlet River in 1933 to Big Jake in 1971. He is, though, looking a little the worse for, er, wear.
.
.

Bruce Cabot
.
Tibbs recruits the Indians, his new friends, to help him bring law ‘n’ order to the wide-open town (they also serve tea) and it’s the Indians who are dignified and decent.
The trailer for the movie is appalling. It rivals that for The Gunfighter (in which Gene Tierney reads from a card and her eyes swivel like ping pong balls) for the title of Worst Western Trailer Ever Made. Still.
.
.

Stiff upper lip
.
The whole movie has a George Marshall tone to it (and I mean that as a great compliment). Raoul Walsh showed that he had a deft hand with comedy Westerns too. It’s entertaining, amusing and despite all prejudiced indications to the contrary, a very good Western.
.
PrevPreviousHard Money by Luke Short
NextBuffalo Bill (Fox, 1944)Next