Big Jake was the fourth of seven big movies John Wayne made down in Durango between 1967 and 1973. It comes between Chisum and The Train Robbers. It’s not quite clear why Wayne made them, as Westerns were in decline and he didn’t need the money. He was 60 when the series began and not in the best of health. His third wife, Pilar, said, “Looking back, I can barely tell those Durango films from one another. They had a sameness of story, plot, and location which seemed like a disservice to Duke’s fans. Different casts are the only thing which make them stand apart.” Actually, she wasn’t even right about that: the plots were different but there is a great overlap with Batjac stock company players (many of them ex-John Ford) appearing again and again.

But Wayne had a horror of financial insecurity, especially after The Alamo nearly bankrupted him, he had a very strong work ethic and he did respond to his fans.
.
. 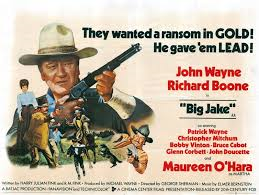 A 70s Batjac Durango Western
.
And commercial though they may be, one of two of them were quite fun in a Wayney kind of way. If you take it for what it is, Chisum, for example, is full of beans and I don’t mind Cahill, US Marshal either. Big Jake, too, has a lot going for it. It’s big, brash and colorful, and the suspense undeniably mounts. You remember the plot, doubtless: it’s the one where estranged wife Maureen O’Hara sends for him because their little grandson has been kidnapped for ransom by an evil band of badmen.

Its working title was The Million Dollar Kidnapping but luckily that got changed to the much more Wayneish Big Jake.

Wayne exhumed George Sherman to direct it (though Duke ended up doing much of the direction himself). Sherman had directed Wayne back in the 1930s in those Three Mesquiteers programmers. Duke was always intensely loyal to old friends and often pushed work their way, espcially if they were in need (as Ford had done too).
I suppose, though, that in some ways Big Jake isn’t a million miles away from those 30s B-movies. Take away the big screen color and big cast and you really have a pretty old-fashioned Western in many ways.
But there are little additions. It’s set in 1907, really quite late for a Western, and the intro shows us modernity, with pictures and voiceover describing Albert Einstein, modern technology and fashions, before slipping back to a generic Wayne West that could be any time in the 1870s or 80s. Automobiles are there, but only to be shown up as useless by comparison with the horse (cf Monte Walsh, et al) and, as in, say, The Last Hard Men, modern means of transport and communication are all well and good but when it comes to a revenge pursuit, they are feeble by comparison with a good ole mounted cowboy with his six-shooter.
.
.

Our first sight of Big Jake
.
Wayne’s production company Batjac was undoubtedly a family business. Duke founded it, his son Michael ran it for 30 years and Michael’s widow Gretchen is the boss today. Rather like Randolph Scott and producer Harry Joe Brown, Duke formed Wayne/Fellows with Robert Fellows in 1952. When Fellows left, Wayne renamed the company Batjac (Batjak was the company name in Wake of the Red Witch and a secretary misspelled it). The company’s biggest project was of course The Alamo. Hondo and the Budd Boetticher/Randolph Scott picture Seven Men from Now were probably its finest Western achievements but all through the 1960s and early 70s Batjac produced some successful commercial Westerns which filled theaters and remain popular on DVD and download to this day.
We open with voiceover introductions of the members of the kidnapping gang. There are nine of them, which is wrong. Everyone knows the Mystical Western Number is 7. And although they are led by John Fain, played by the quite splendid Richard Boone in his poncho, one of the best villains ever (you only have to watch this movie and Hombre to see the truth of that) it must be said that the majority of the gang are also-rans.
.
.

Splendidly bad
.
There’s O’Brien, an Irish-Apache half-breed (Glen Corbett); ‘Trooper’ (Jim Burk) is a back-shooter; William Fain (Robert Warner) is Boone’s younger brother and is said to favor a Greener to do maximum damage; ‘Kid’ Duffy (Dean Smith) is a dead shot with a high-powered rifle; William Devries, Billy (Jeff Wingfield), in his first outlaw act, and his brother Walt (Everett Creach); and indiscriminate killer John Goodfellow (Wayne groupie Gregg Palmer) who favors the machete. So it’s not exactly a stellar line-up, apart from Boone, and indeed they are all a bit wishy-washy, I fear, though suitably homicidal. Luckily, the ninth gang member is Pop Dawson, who rode with the James boys. It’s Harry Carey Jr in beard and bad teeth, looking amazingly like Edmond O’Brien in The Wild Bunch two years before (perhaps he used Edmond as a model).
.
. 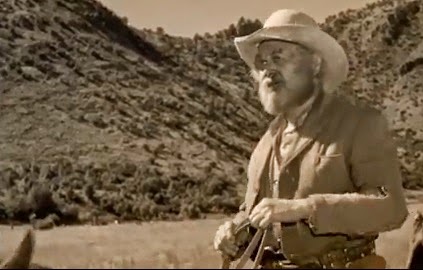 Dobe
.
The McCandles ranch house is prettied with flower beds. Maureen O’Hara presides over it. She was invited down to Durango to preen in green and order the black servants about. Luckily she is written out after 34 minutes and once Jake sets off on his quest is never heard from again. It was her last Western of eleven and that was eleven too many for my taste. The previous one had been The Rare Breed with James Stewart in 1966, one of the worst Westerns ever made.
.
. 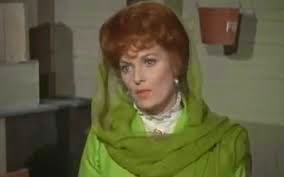 Preening in green
.
The gang descends on the ranch and kills people (luckily only the servants so it could have been worse). But they wound a McCandles son, Jeff, played by pop singer Bobby Vinton. Wayne Westerns often felt obliged to have a pop singer, heaven knows why. But he too is soon left behind, in bed, and never seen again. The really bad thing is that the gang abduct the little grandson of Wayne and O’Hara, Little Jake (played by Wayne’s own young son from a third marriage, whom he named for his character in The Searchers, Ethan). And they leave a note demanding a million dollars ransom.
.
.

Good old Jim
.
Big Jake is off saving the life of an about-to-lynched sheep-farmer (Welsh comic actor Bernard Fox playing a Scot). Jim Davis is the would-be lyncher. Good old Jim. Jake is helped by his sidekick, Dog, who is a very good actor (trained to a nicety) and reminds us, deliberately, I am sure, of the mutt Sam in Hondo. But Jake receives the come-at-once note and duly returns to McCandles, Texas.
.
. 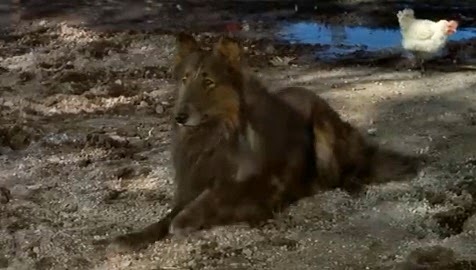 That’s one mean Collie
.
Jake’s son Michael (Christopher Mitchum, son of Robert) turns up on a motor-cycle to show the power of new technology.
.
. 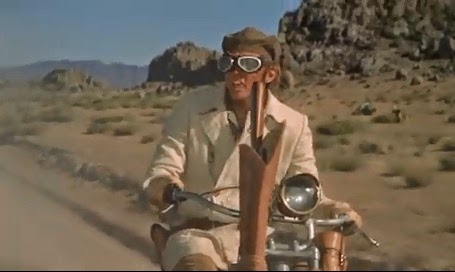 Michael has a Bergman 1911 automatic pistol which causes much hilarious mayhem.

He also has a high-powered scoped rifle to rival that of badman Kid Duffy. Guns play a key part because O’Hara has brought along Jake’s brace of Greeners, which are lovingly described.

Greeners
.
Amazingly, though, Duke also has a derringer, a sneaky pop gun usually only employed by slick gamblers and shady ladies. He calls it Betsy and it comes in handy at the end of the movie. Good guys hardly ever had derringers. They were for gamblers and saloon gals. Never thought I’d see Duke of all people with one!
.
.

Just imagine, Duke with a derringer!

The Texas Rangers in Model Ts (one Ranger is Chuck Roberson) also turn up under John Doucette.

John Doucette, motorized Ranger
.
Everyone who sees Jake says “I thought you was dead” which enables Wayne to give back his old line, “That’ll be the day”.
The family factotum and chauffeur is Hank Worden, obviously.
The Indian scout Sam Sharpnose is Duke’s drinking pal Bruce Cabot, in his last Western. Thirty-five years before he had been Magua in the Randolph Scott The Last of the Mohicans, so he came full circle. He had rescued Fay Wray from the clutches of King Kong and had auditioned for the Ringo part in Stagecoach which Ford gave to Wayne. Cabot and Wayne co-starred in Anngel and the Badman. Cabot was in four of these late Wayne Durango pictures. 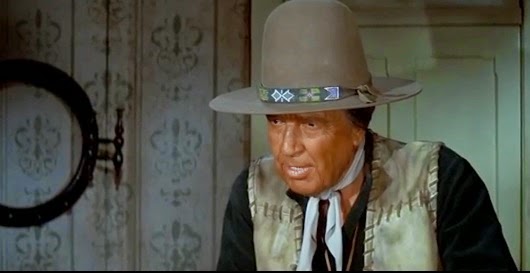 From Magua to Sam

The screenplay was written by the Finks (Harry Julian and Rita M) and isn’t bad. James Edward Grant was not available, deceased.

I must say, there is some lovely photography of the Durango locations. Batjac got Ford alumnus William Clothier down. Clothier’s very first Western had been with Wayne, The Big Stampede in 1932, and he was to work on ten other Wayne Westerns. It was a remarkable association and it must be said that Clothier’s photography was one of the strong points of Wayne movies.

Very nice photography
.
The music, too, is big and beefy. Elmer Bernstein, no less. At the start of the picture, the little boy had been playing Frère Jacques on the piano, and whenever the child is mentioned thereafter Bernstein has nice little orchestral variations on the tune.
There’s a rather tiresome ‘comic’ saloon fight we could have done without.
.
.

The brothers James and Michael McCandles, Patrick Wayne and Christopher Mitchum
.
Still, the tension does build as they get nearer to the place (a Mexican oil town) where the boy will be exchanged for the million bucks. OK, you know badman Boone will lose but you aren’t quite sure who will survive. Of the good guys, only the Indian and dog are killed, so that’s alright, and the now reunited father and sons can go back to the ranch with the rescued boy and live in peace and harmony. It won’t last.
.
.

Not quite as good as Tom Mix’s leap over Newhall Pass in Three Jumps Ahead but it’ll do
.
OK, Big Jake is probably too long and predictable and no prizes for originality or anything new or important to say but there’s Duke in that salmon-pink shirt and I notice he still has that old yellow-handled Colt .44/.40. There’s shootin’, rootin’ and tootin’. It filled the movie theaters (in the Middle West anyway) and is still a whole lotta fun to watch today if you are an undemanding Western fan. Like me. 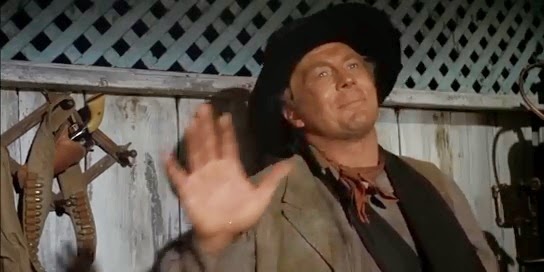