.
An extraordinary woman
.
.
Martha Jane Canary or Cannary, known to us all as Calamity Jane, has suffered almost as much in history as she did in life. She herself (in her youth anyway) loved telling tall tales about her life and such stories abounded among her friends and acquaintances, and grew with the retelling. She was early the subject of sensational newspaper articles, then dime novels. In the twentieth century, Hollywood took up her story and endless Janes – over thirty anyway – from Jean Arthur to Jane Russell to Doris Day to Anjelica Huston have added layers of interpretation and myth until a rich patina covers Martha Jane. It is difficult to discern the fact under the fiction.
.
. 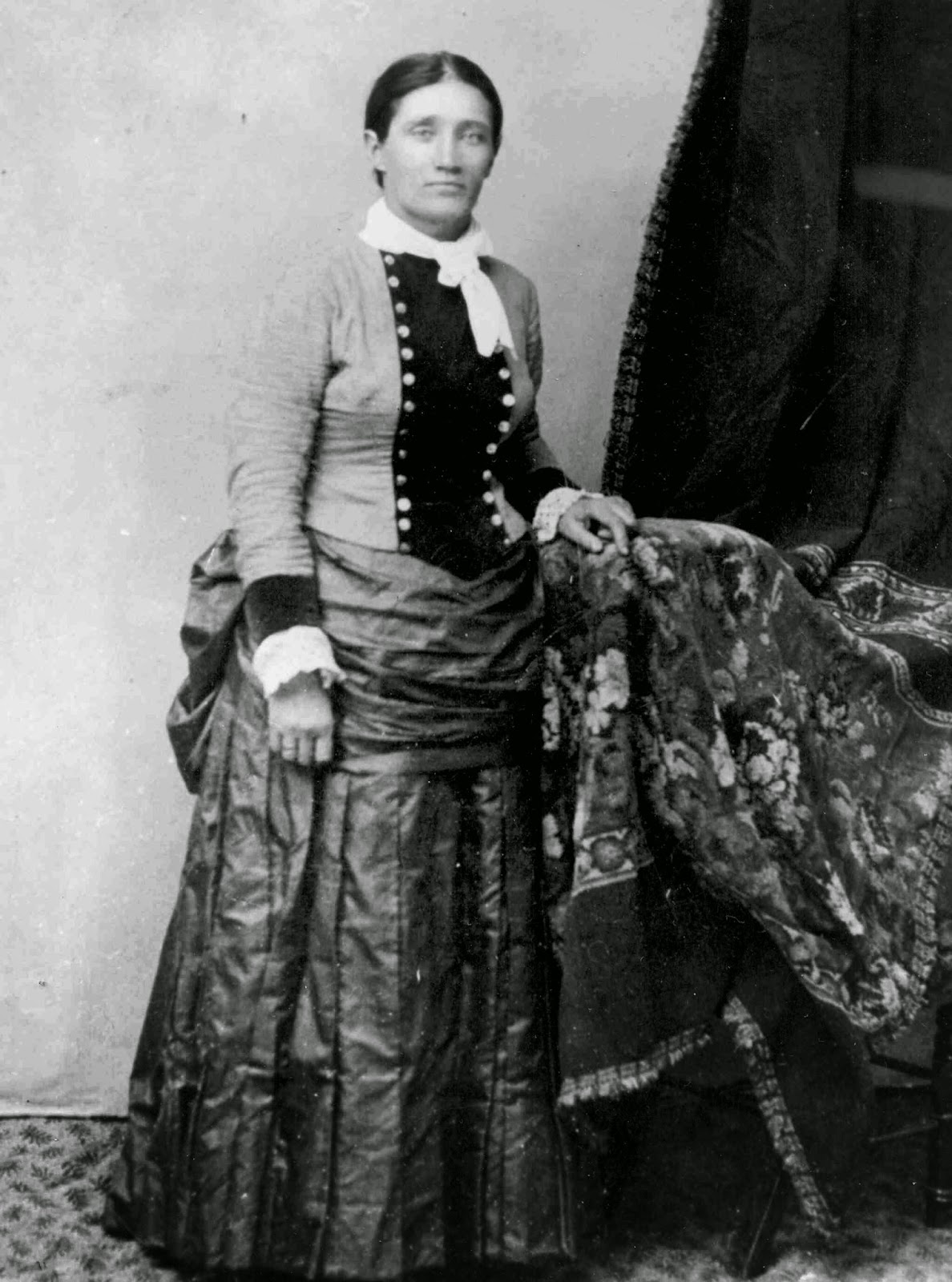 Elegantly attired for the camera
.
Difficult but not impossible. There’s help at hand. There are several good, reliable biographies of Calamity. Just last month the excellent Richard W Etulain (whose book Telling Western Stories I commented on back in December last year) came out with The Life and Legends of Calamity Jane in the Oklahoma Western Biographies series. You can also read Linda Jucovy’s Searching for Calamity: The Life and Times of Calamity Jane (2012) and, also published in 2012, James D McLaird’s Calamity Jane: The Woman and the Legend. All three of these writers, and others, appear as talking heads in a quality 2014 documentary shown on the Franco-German channel Arte the other day, Calamity Jane: Wild West Legend, written and directed by Gregory Monro.
The documentary and the books highlight the position and status of women on the frontier. Most prairie women were drudges who worked from dawn to sundown, wore themselves out and died young: if they didn’t die in childbirth or catch a mortal disease they perished early from sheer hardship. Their identities were subsumed in those of their men – their fathers first, then their husbands. They were hardly people in their own right at all, even if pioneering Wyoming, where Jane spent most of her time, was the first to allow women the vote.
.
. 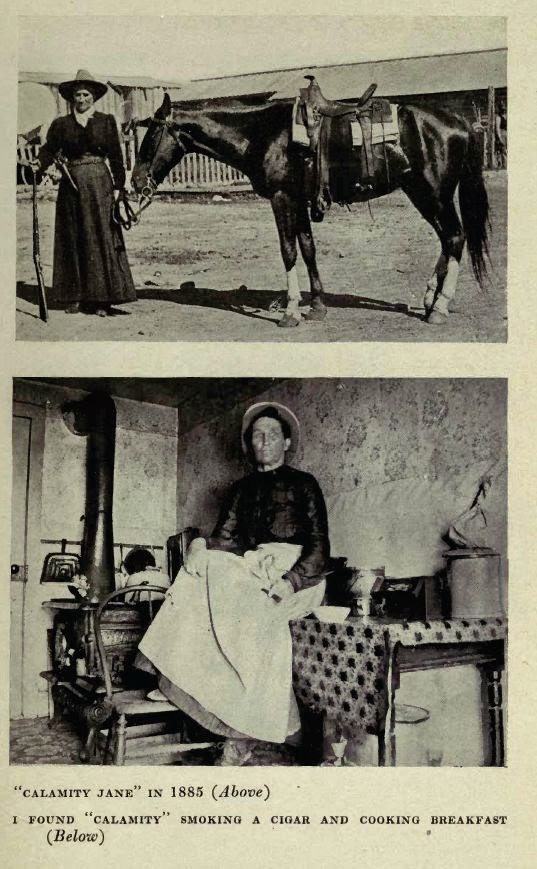 The real Jane
.
What made Jane stand out was her refusal to follow the conventions of the time. Not for her the woman’s life of household chores and field work. She smoked cigars, wore pants, was expert with firearms, rode astride and entered bars. We are used to seeing such things because of Hollywood but in reality it would have been shocking to most (men and women) to see. Most saloons were not the glossy palaces of Western movies but low dives, sometimes tents, with a ‘bar’ of planks across barrels and only men inside, and at that men of the low kind. Women simply did not enter. Even prostitutes were usually in huts and cabins out back. Jane, however, was at home in these sordid saloons and could drink, swear and spit as well as the other patrons. She was in fact a lifelong alcoholic and it was booze that led to her ruinous state, especially towards the end of her life. It often got her thrown in jail. In the end she was on the street, one child dead and another given up for adoption, alone, sick and miserable.
She worked at whatever would earn her a few cents. She washed dishes, cooked, waitressed and once became an ox team driver. Certainly she also prostituted herself. It was not so surprising: despite her constant desire to be ‘respectable’, there were very limited options for an unmarried and destitute woman in 1870s Wyoming. She seems to have worked in a ‘hog ranch’, which was pretty well the lowest kind of brothel, no glitzy town bordello but a rude shack out of town where men knew they would find ugly women, but cheap. The site of Jane’s birth is nowadays occupied by a Premium Standard Farms hog farm but it, ahem, isn’t that kind of hog farm.
Calamity was no beauty. There are many photographs of her because she achieved considerable fame and notoriety but in none does she look graceful or pretty. However, although in movie after movie she is shown in buckskin jacket and pants, there are relatively few photographs of her in this garb. The vast majority of them show her in a dress.
.
. 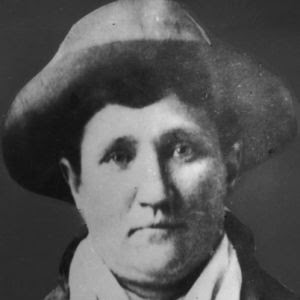 No beauty
.
She started life in 1852 in Mercer County, Missouri, on a farm. Her father was a gambler and her mother was a drinker. She didn’t stand much of a chance. She had little or no schooling and was illiterate. In 1864 her father moved the family to Virginia City, Montana, and then on to Salt Lake City, Utah. Her mother died and her father absconded. Martha Jane wandered into Wyoming, was taken in by a foster family at the age of 12 but she was treated as a slave and broke out once too often. Frequenting soldiers, drunk and imprisoned, she was eventually shut out by the family and left to fend for herself. While this must have been a terrible plight in most ways, it did at least make her independent and free. She had no ties. She could go where she wanted, within the limit of her resources, and had no one to tell her what to do or how to behave.
She first became famous when she accompanied General Crook on the expedition that led to the first Rosebud. Though a woman in the ranks had been known, it was certainly not common and when she was discovered by the officers (the men certainly knew already) she was incarcerated in a military prison in Fort Laramie. It was there that Wild Bill Hickok and his party arrived and they agreed to take Jane with them to Deadwood. This began the famous association in people’s minds (especially Jane’s) between Hickok and Canary. There is in fact no evidence whatsoever that Bill and Jane were lovers, and still less husband and wife, however much Jane might have wished it. Hickok had recently married the widow Agnes Lake Thatcher and his letters to her are moving and respectful. Though doubtless no saint, he had no interest in Jane. Jane was not in Deadwood when in 1876 he was shot by Jack McCall in Nuttall & Mann’s, despite what is inevitably shown in movies. But she got her wish in the end for when she died, in 1903, she was buried next to Bill. He was in no position to object.
.
. 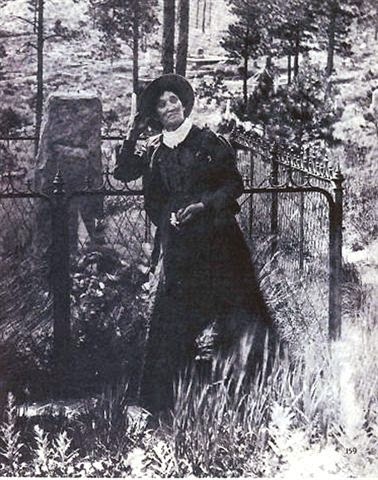 In the last known photograph of Jane, in 1903, she stands smiling before the grave of Wild Bill
.
As for her nickname, she herself said (in her unreliable dictated ‘autobiography’ – a seven-page pamphlet) that in the 1872/73 campaign,
When fired upon Capt. Egan was shot. I was riding in advance and on hearing the firing turned in my saddle and saw the Captain reeling in his saddle as though about to fall. I turned my horse and galloped back with all haste to his side and got there in time to catch him as he was falling. I lifted him onto my horse in front of me and succeeded in getting him safely to the Fort. Capt[.] Egan on recovering, laughingly said: ‘I name you Calamity Jane, the heroine of the plains.’ I have borne that name up to the present time.
She was certainly already known by the name in 1875 because on her arrival in Deadwood, the July 15, 1876 edition of The Black Hills Pioneer reported, “Calamity Jane has arrived!”
The dime novelists took her up and in particular, starting already in 1877, she featured in the Deadwood Dick tales by Edward Wheeler, in the Beadle’s Pocket Library series. The adventures were very sensational and, of course, purely fictional.
.
. 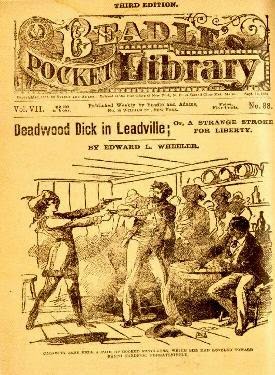 Two-gun Jane partners Deadwood Dick
.
The real Jane had relationships with a series of men, perhaps half a dozen. She married one, William P Steers (a marriage certificate was found), and had two children, a boy who died in infancy and a girl, Jessie, who survived. But Steers was violently abusive and the marriage did not last.
Very much down on her luck, Jane was ‘adopted’ by a prim society lady from Buffalo, NY, a Mrs Josephine Brake, who took Jane East and forbade her strong drink. Mrs Brake became her unofficial agent and got Jane work at $50 a week (a tidy sum) in Kohl and Middleton’s Barnum-esque show and then Frederick Cummings’s Wild West Show. But Jane hated the shows, the East and sobriety in equal measure and the photograph of her taken at this time shows what is clearly a miserable person.
.
.

She obviously hated it
.
Eventually she could take it no more and drifted back West to (a much changed) Deadwood, selling photographs of herself and copies of the autobiographical pamphlet (which didn’t even spell her name correctly) and telling stories for a drink.
She died in a squalid hotel near Deadwood in 1903, an old woman in appearance but in fact only 47.
The year of her death was also the year of the first proper Western film. Her character appeared in three silent Westerns (played by Lucy Fox, Ethel Grey Terry and Mae Laurel) and then she was prortrayed by Louise Dresser and Helen Gibson in talkies. Jean Arthur was Jane in the 1936 Cecil B DeMille farrago The Plainsman (with a stupendous Gary Cooper as Wild Bill) and already the stereotype was established. Frances Farmer was Jane (though never referred to as Calamity)  in Badlands of Dakota in 1941, with Rochard Dix as Hoickok. Later Janes, such as Jane Russell in The Paleface and Yvonne de Carlo in Calamity jane and Sam Bass, bore no resemblance, in appearance or character, to the real Jane and the heights of absurdity were reached with Doris Day’s chirpy tomboy blonde in the 1953 musical.
.
. 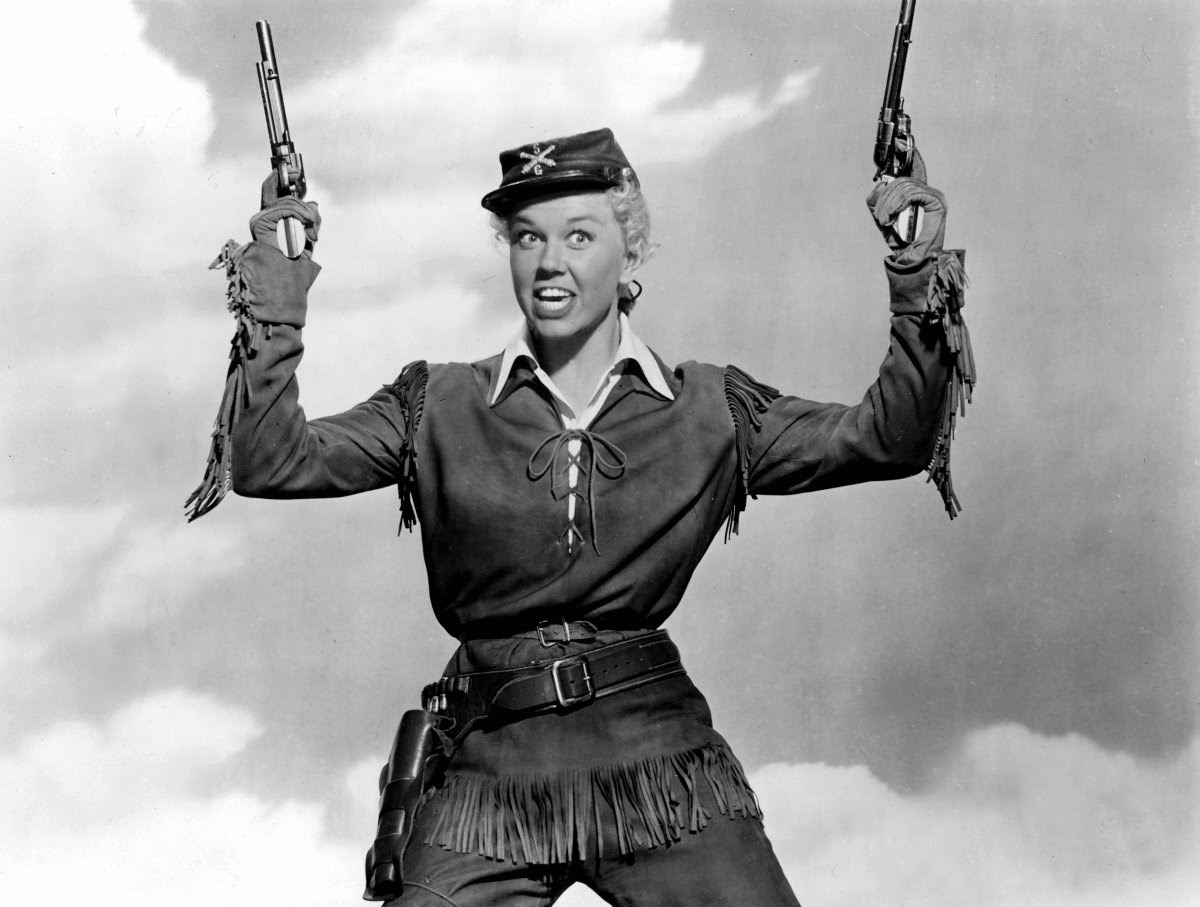 Tomboy Doris
.
There was a made-for-TV movie in 1984, Calamity Jane, with Jane Alexander in the title role.Ellen Barkin was Calamity in the 1995 Walter Hill picture Wild Bill, in which she once again had an affair with Bill. The same year Anjelica Huston took the role in Buffalo Girls, and wen,t to En,gland with Buffalo Bill’s Wild West (she didn’t). There have been many other Janes.

.
.
The closest we got on screen to the real Jane was, perhaps Robin Weigert in HBO’s Deadwood but even that was hardly a faithful portrayal.
.
. 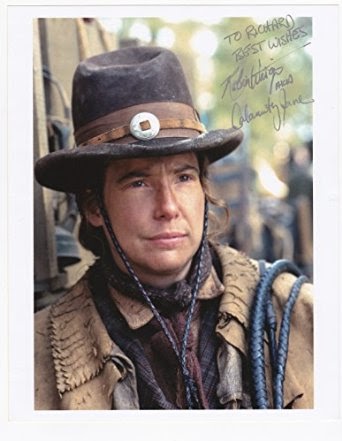 Robin was about the best
.
Jane did, however, appear many times in Westerns: every time a gal in pants rode astride or wore a sixgun, consciously or not Calamity Jane rode again.
.
. 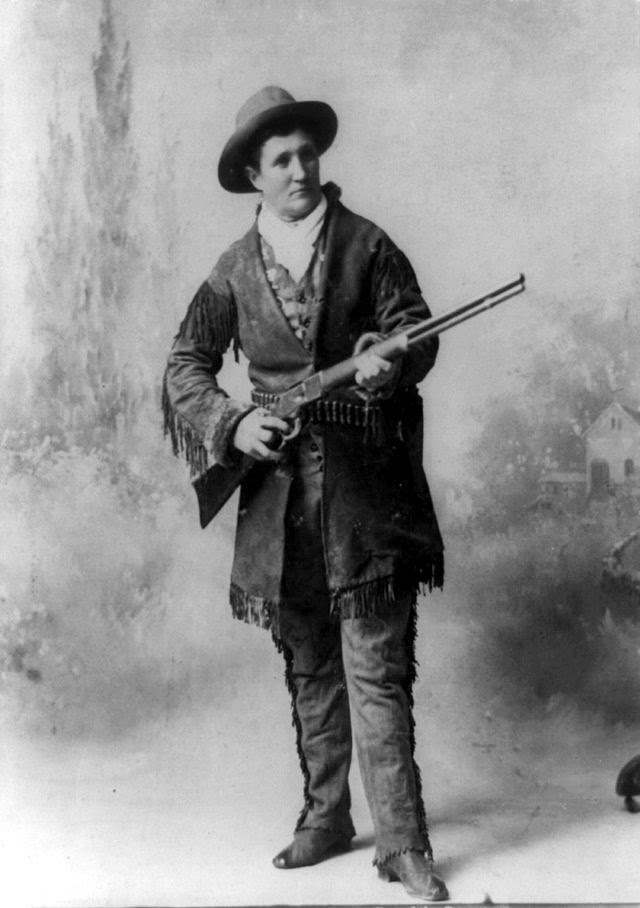