Only just a Western but still quite fun
.

The late 1940s were a golden age for John Wayne. The endless Poverty Row B-movie programmers of the 30s were a thing of the past and he now starred in some big pictures for Republic, RKO and even, in the case of 3 Godfathers, MGM. The pleasant Angel and the Badman of 1947 was followed by mighty examples of the genre, notably the Howard Hawks-directed Red River, which screened in 1948, and the wonderful trilogy of John Ford pictures Fort Apache, She Wore a Yellow Ribbon and Rio Grande, 1948 – 50. Still, Duke found time to produce his own film for Republic (the titles proudly say A JOHN WAYNE PRODUCTION) which appeared between Fort Apache and Yellow Ribbon, The Fighting Kentuckian. 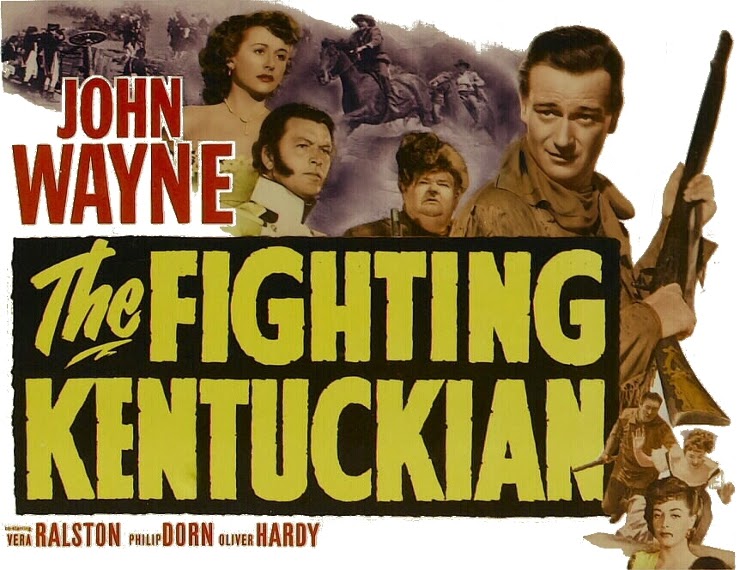 Hardly a Western at all, but entertaining
.
Now The Fighting Kentuckian is only barely a Western at all, as The New York Times commented, being more of an historical romance. Set in 1819, it has backwoodsmen with single-shot muskets and coonskin caps, and gentlemen with top hats and cutaway coats. Still, if you are not a purist in your definitions you will let this movie pass as a Western because it has Western themes and tropes, and well, it smacks of one.
It is no Red River or Fort Apache, let’s be clear on that at the outset. It’s a pleasant enough excursion into Alabama, rather slow to begin with but picking up the pace to quite an exciting climax, with some weak acting, notably from Vera Ralston as the heroine and good old Hank Worden (hardly at the top of his game: he dutifully announces the lines he has learned – luckily it’s a small part) but also with some quite good playing, especially from Wayne and, as his obese sidekick, Oliver Hardy, sans Laurel.
.
. 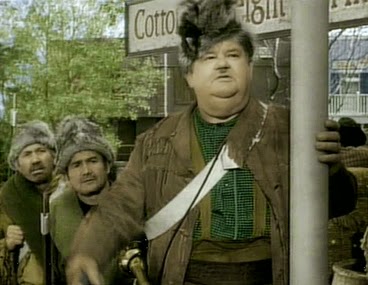 Oliver Hardy is the comic sidekick
.
.
It was directed by George Waggner, the 77 Sunset Strip fellow (how I loved that series as a boy). But Waggers had been involved in Westerns (as actor, writer or director) since the Stone Age – well, 1922. The Fighting Kentuckian was probably his biggest Western, maybe his biggest film, though he also directed Randolph Scott in Gunfighters in 1947. He could handle action, and while the screenplay saddled him with sluggish plot development in the first reel and too little action (that was his own fault as he wrote it), once the pace picked up he showed he knew how to do it alright.
.
. 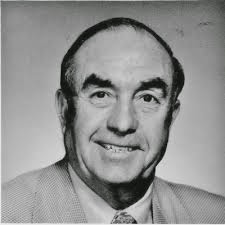 George Waggner
.
Despite the unusual historical context, the plot is in fact standard Western fare. Congress has granted some Napoleonic exiles land in Alabama, and they have founded Demopolis. This means that the actors speak English wiz a Franche accont, at which Ms Ralston is not too good, but never mind. Actually, Hugo Haas as the French general (and father of the girl) and Philip Dom as his right hand man Colonel Geraud (well, he would have been a right hand man had he not lost his arm in ze war) are rather good, and they manage quite a moving portrayal of defeated soldiers trying to hold on to their pride and start a new life in a weird world populated by the likes of John Wayne and Ollie Hardy in buckskins. So far, so quite unusual.
.
. 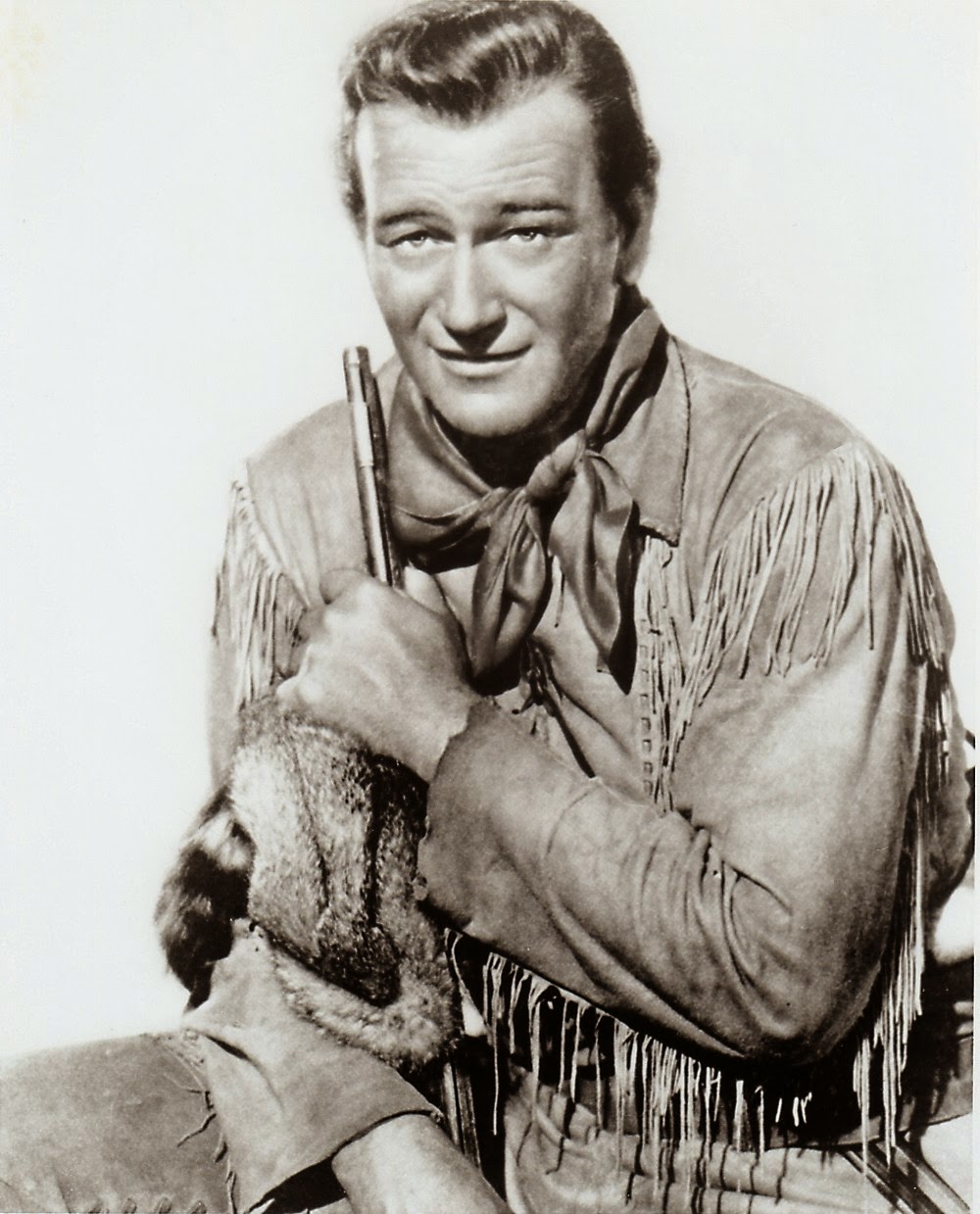 Duke doing his Davy Crockett/Dan’l Boone act
.
But in fact it turns out that a slimy boss of the town (in a mustache, natch) wants the land which Congress has granted the exiles for himself, and he and his henchmen (one of whom is Wayne’s pal, the excellent Paul Fix) are prepared to stoop to unscrupulosity to get it. The hero will thwart their evil schemes.
OK, I know unscrupulosity isn’t a word but I like it, so it is one now.
.
. 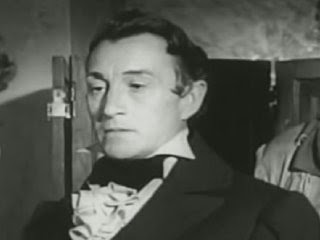 Paul Fix henching away
.
This plot has of course adorned almost every Western there ever was.
Although there are no sparks at all between Wayne and Ralston (in fact he appears more attracted to the naughty saloon gal Marie Windsor), there is an evident chemistry between Duke and Ollie. Mr Hardy even manages to mount a horse at one point, though he is usually seated on a log and blowing on a bugle, or waddling about in that hammy way he had. Still, though, he shows an unexpected talent for the thespian arts, even if his role is hardly Shakespearean, or if it is, it is more in the Macbeth porter class than Falstaff. Vera Ralston appears to have been warned against woodenness and overcompensates by overacting. She was actually in eleven Westerns, amazingly, but the fact that her husband was the studio boss may have had something to do with that.
.
. 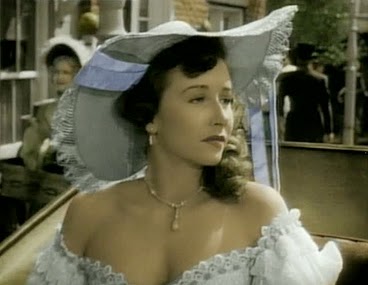 Vera Ralston
.
There’s a good high-speed wagon chase, doubtless the model for Bullitt, and an actionful climax, with the brave Kentuckians (they are Andy Jackson veterans) coming to the rescue of the brave Frenchies and beating the dastardly land-grabbers. Wayne marries Vera and they go off on their honeymoon. Duke asks rather hopefully if Ollie can come along but is given a firm no. 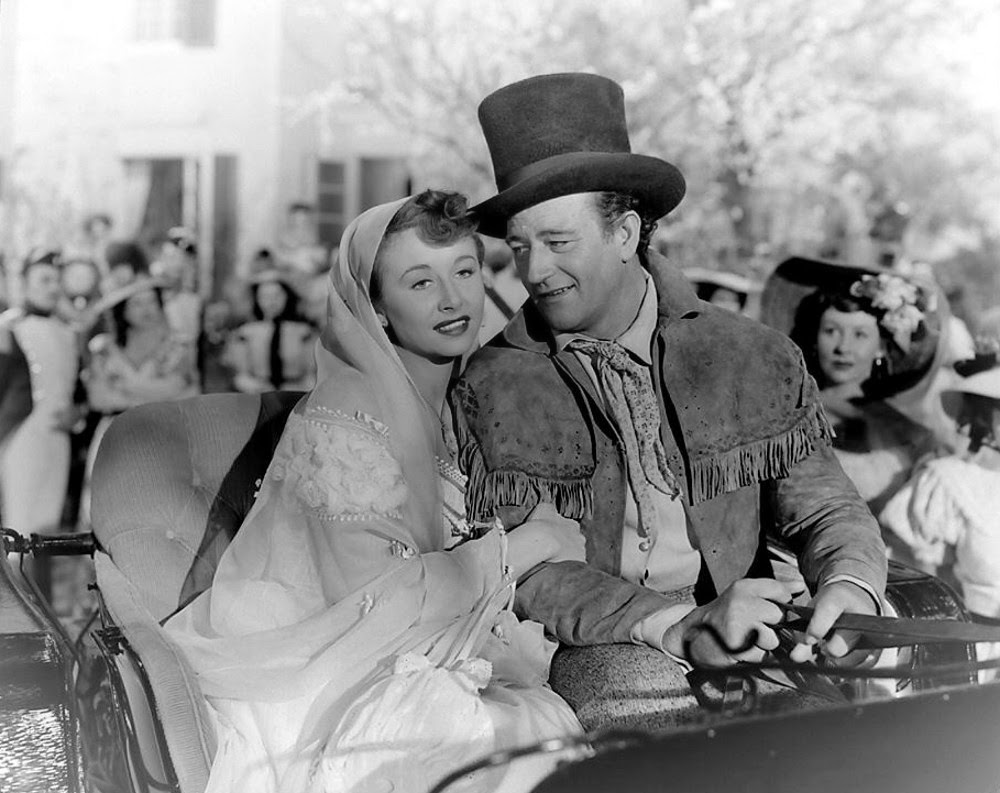