Annie Oakley is one of the great icons of American history, culture and myth. She was an early ‘celebrity’ and she still is one. Because of this there are very many books on her – biographies, novels, children’s books and, because she was so frequently photographed in her life, photo-books. Her face and her figure are immediately recognizable to us. 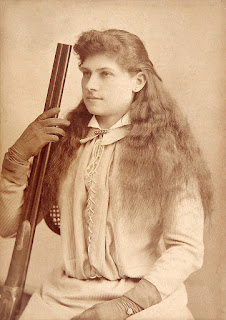 Annie c 1882
.
And of course she appeared in fictional form in a variety of ways: even during her days with Buffalo Bill’s Wild West Show there were lurid dime novels featuring her and in 1935 Barbara Stanwyck played her on the big screen in RKO’s Annie Oakley. The 1940s Broadway musical Annie Get Your Gun starring Ethel Merman was brought to the silver screen, also as Annie Get Your Gun in 1950 with Betty Hutton as Annie. And many of us will remember Annie Oakley in the curvaceous shape of Gail Davis, in the three-season TV series from 1954 to 57.
These screen or stage Annies were uniformly dreadful but hugely popular. Little Miss Sure-Shot, the sharpshooting Girl of the Western Plains, is an established figure.
Yes, everyone knows Annie Oakley.
Or do they?
Early life
The real Annie was a very different but no less interesting person than the one that dominates popular perception. Phoebe Ann Mosey (1860 – 1926) was no Far Westerner. She was born, the sixth of nine children, in Darke County, Ohio. Her parents were Quakers from Pennsylvania, of English descent. She grew up in great poverty. Her father died from the effects of a terrible blizzard when Annie was six and her mother could not support such a large brood of children. Annie was packed off to the Darke County Infirmary, where she lived and learned to sew – ordinary school being out of the question.

Bonded servant
At the age of ten she was then “bound out”, as it was called, to work as a servant for a local family. Annie was so scarred by this brutal experience that she would never after refer to these people by name, calling them only “the wolves”. The “she-wolf” treated her especially cruelly, on one occasion, when Annie fell asleep over some darning, thrusting her barefoot outside into the snow – an experience which, given the fate of her father, must have been especially grueling. She lasted two years of abuse, itself a testament to her true grit, before running away back to her mother, and, inevitably, back to the infirmary.
.
. 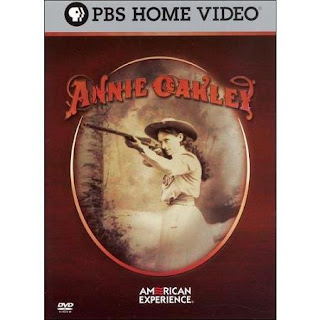 Excellent documentary
.
In an excellent 2006 documentary in the American Experience series, Annie Oakley, which was aired again last night on PBS (which, happily, I now get over here in France), these early days are graphically and movingly described, and the point is made that these experiences marked Annie for life, unsurprisingly. She was always after that determined to safeguard her livelihood and avoid slipping back into poverty. And she was always almost angry with the world; this feeling lay behind everything she said and did.
She takes up the shotgun
In fact it was to feed her family – she went back to the family home when she was fifteen – that she took up a shotgun. She found herself to be a natural shot. It was simply easy for her. She hardly
seemed to aim; she just fired at a bird and it fell. She never missed. She just had an innate talent for it. She started supplying fowl to local businesses. She saved money and paid off the family mortgage. Things got more or less back on an even keel.
But then came a life-changing moment.
The great marksman
Shooting in general was more than an essential skill for frontiersmen. It had become a big spectator sport all over the country. Contests were common and famous marksmen toured the country giving displays of sharpshooting (some of them remarkable). Shootists like Doc Carver, Captain Bogardus or Frank Butler were famous and admired. On the arrival of Butler near Annie’s home a challenge was issued: no one would be able to outshoot the great Frank Butler. When a fifteen-year-old girl presented herself as challenger he probably laughed. He didn’t laugh quite so heartily when he was roundly beaten.
.
. 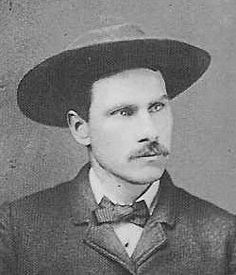 Frank Butler
.
But instead of taking umbrage, Frank lost his heart to the beautiful young markswoman. He took her into his variety act (where she assumed her maternal grandmother’s name of Oakley for the stage) and slowly but surely she took over. It wasn’t long before he was the one tossing up the glass balls for his wife to hit. For they were married in June 1882, when Annie was 22 and Frank 35.
Variety
This slight girl from the Ohio woods, five feet tall and 100 pounds, became one of the most famous people on the planet. But the start of her career wasn’t easy. She disliked the raunchy and crude atmosphere of the variety circuit, as she and Frank toured the States doing one-night-stands. The variety acts then were full of saucy dames who were scantily clad for the day, and there was much double entendre. Annie responded by dressing herself in a costume that allowed her freedom to move and do her act yet was sober and becoming – and all-covering. And in fact throughout her career she managed to steer a path between rough countrywoman with a gun and demure Victorian lady. Her petite and girlish figure was almost exploited. She was known as “Miss Annie Oakley”, though everyone knew she was Mrs Frank Butler, and she was usually referred to as Little Missie. She wore short girlish dresses, but with buttoned gaiters to cover her legs. It was a clever ploy.
.
. 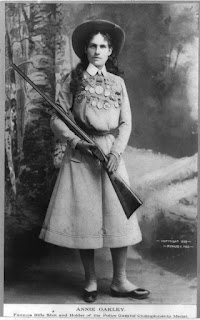 The circus
The Butlers joined the Sells Brothers circus and this was definitely a step up from the variety halls. But what they really wanted was to appear in Buffalo Bill’s Wild West. In New Orleans, when the Sells season ended, they almost got their chance but Cody already had Capt. Bogardus as a show marksman and he was unsure that a slim girl could stand the rigorous pace of show life. However, after the famous riverboat accident, in which Bogardus lost all his guns and equipment, he quit and the Butlers got a trial. Cody’s business partner Nate Salsbury was smitten by Annie and saw her commercial potential, and the pair was hired.
Buffalo Bill
This ambivalence of Cody towards Oakley lasted. He never really seems to have placed full confidence in her. It may be that Cody, himself a marksman of no mean ability, felt pangs of jealousy when he saw Annie’s act, for she achieved feats beyond the reach of Buffalo Bill, and the great showman, like any showman really, never wanted to be upstaged.
.
. 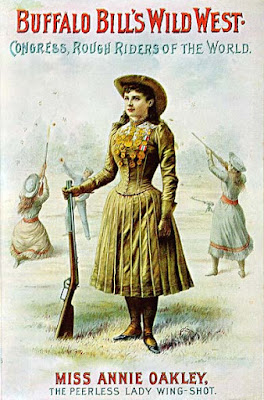 Star of the Wild West
.

.
A rival
When Buffalo Bill went to England, he engaged another young girl sharpshooter, Lillian Smith. From the outset this interloper was a threat to Annie. Only 15, yet declaring herself to be “champion rifle shot of the world” (she had it embroidered on her bodice in large letters legible from the stands) she quickly became Annie’s principal rival, and Cody did nothing to back Annie up. The two had equal billing in London. Smith was coarse and overweight (Annie scathingly referred to her “ample figure and poor grammar”) where Annie was petite and refined. But Smith pushed herself forward, for example when the two were presented to Queen Victoria, and there was a danger that Annie’s star would fall. Annie learned PR from that: she now promoted her age as 20 (she was 26) and at a famous shooting competition in Wimbledon (from which Buffalo Bill himself was strangely absent) Lillian performed badly while Annie hit every target – and not with a shotgun but with Lillian’s weapon, the rifle. It was a crushing victory. When the show moved on to Paris, Lillian Smith was not with them.
.
. 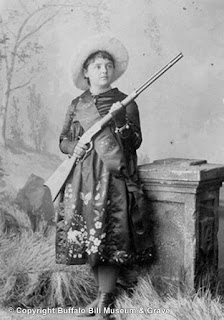 Rival Lillian Smith
.
But something was amiss with Buffalo Bill. After a while the Butlers left the show and went, probably with a heavy heart, to vaudeville. It was a tough year. Annie starred in a dreadful play. But in February 1889 Nate Salsbury (not Cody) invited the Butlers back, and they agreed – under what terms is not known.
Dime novel heroine
The Butlers began a systematic publicity campaign. Rifle Queen was a trashy but hugely popular dime novel that told of Annie’s youth on the frontier killing Indians, saving stagecoaches from hold-ups, grappling a wild cat and the like – all complete nonsense of course for a Quaker servant girl in Ohio but it made money. These absurd tales were the ones that fed into later big- and small-screen Annie Oakleys. As Annie roamed the West on TV with her trouble-prone little brother Tagg, righting wrongs and (safely) shooting the pistols out of the hands of villains, she was really only moving on a little from Rifle Queen.
.
. 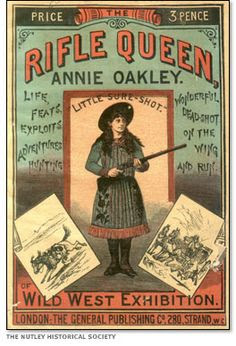 Dime novel heroine
.
But there’s the rub. As the new century dawned, a new invention appeared which threatened the whole existence of Wild West shows. It was the movies. Right from the get-go Westerns dominated the early flickers. And they very rapidly became more sophisticated and more popular. Interest in Annie’s act declined.
Legal battles
In a train crash in 1901 she injured her spine and the Butlers decided to call it a day. Her last years were dominated by a fight to clear her name when the gutter press, led by Hearst papers, which with typical careless incompetence printed a sensational story without verifying the facts, accused her of having stolen “a Negro’s trousers to buy cocaine”. It was another woman who falsely claimed to be Annie Oakley. The true Annie was outraged and spent years suing for libel. It became an obsession with her. The idea of losing her good name was unbearable and she would do anything to prevent it. In fact she won 54 out of 55 cases but she ended by paying out more in legal fees than she won in damages.
Her last years
Now 50, she signed with a new Wild West show but it was soon clear that the glory days were over, and she retired for good in 1913. Frank said that “she was a rotten housekeeper”. She spent her time teaching women to shoot. She was no feminist and she opposed women’s suffrage but she certainly thought a woman ought to be able to defend herself. She was in an auto accident and quite badly injured, always walking thereafter with a leg brace. She melted down all her gold medals and gave the money to charity. She died in 1926. A devastated Frank died eighteen days later.
.
. 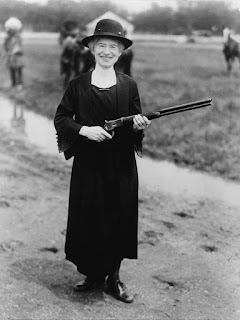 Annie c 1922
.
What comes across from the PBS documentary is her ability to present herself as a powerful woman with a gun and at the same time a pure and demure lady. It was quite an act.
The documentary was directed by Riva Freifeld and written by the entertainingly-named Ken Chowder (I think I know his friend George Gumbo and his French cousin Marcel Bouillabaisse). Mr.
Chowder has written films on John Brown, the Civil War and the war of 1812, among others. Annie Oakley is very well written and it’s great to be shown such a lot of photographs, many of which I had never seen before. And there’s even early film footage of her shooting. It’s definitely worth a watch if it comes on, or a DVD purchase.