1953 was a great vintage for Westerns and as well as some truly superb examples of the genre such as Shane, The Naked Spur and Hondo, there were also many lesser – but still very good – oaters released in that year. Randolph Scott made three in ’53, and two of them, The Stranger Wore a Gun and Thunder Over the Plains (one for Columbia, the other for Warners) were directed by a one-eyed Hungarian.
.
.

André De Toth
.
Sasvári Farkasfalvi Tóthfalusi Tóth Endre Antal Mihály, whom film buffs know by his more American-friendly moniker of André De Toth, was an Austro-Hungarian who fled to England, worked under Alexander Korda there and then came to the US in 1942. He got a rep for hard-boiled crime dramas (and 3D horror) but he also loved the Western, that most American of movie, and made an excellent start with Ramrod in 1947, a Joel McCrea/Veronica Lake noir based on a novel by the great Luke Short. In 1950 he contributed to the screenplay of The Gunfighter, that magnificent Gregory Peck/Henry King film, so one way and another his Western credentials were already in the early 50s outstandingly good. In 1951 – 52 he made two oaters with Randolph Scott and one with Gary Cooper, and if these were not perhaps at the very pinnacle of the genre (was certainly one of Coop’s weaker efforts), still by 1953 we can say that André De Toth was one of the leading directors of Westerns.
.
.

Not bad, and quite good in parts
.
Thunder over the Plains is a post-bellum story set in Reconstruction Texas, finishing with the patriotic readmission of the Lone Star state into the Union, in, it must be said, a slightly saccharine scene. The hero (Randy) is a Union captain in what is bluntly described as an army of occupation, but though a decent soldier and firm believer in the Union, he is a Texan, largely sympathetic to the oppressed peoples. These ‘oppressed’ are naturally white, and cotton growers, and the only black people shown are two cheerful fellows cheering the anti-Reconstruction Rebels… Anyway, the language of the movie pulls no punches in its anti-Reconstruction stance, as was normal for Western movies: they had a very one-dimensial view of the period and saw no good in Reconstruction at all. The Northerners are all carpet-baggers and crooks. Elisha Cook Jr is a corrupt tax commissioner in league with dishonest Hugh Sanders, overtaxing the poor Texas farmers so they are obliged to sell their property cheap to Sanders, who then gives a cut to Elisha (though then they fall out).
.
. 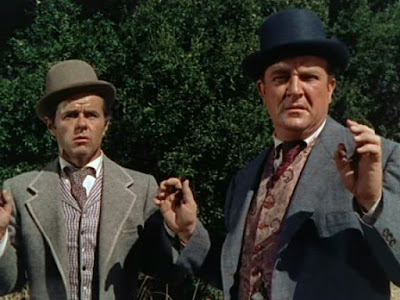 Evil Northerners
.
The Rebels are led by a noble Ben Westman (Charles McGraw), openly described as a Robin Hood, one of those good bandits that Hollywood Westerns so loved. He is in fact a patriot and he too wants Texas back in the Union. I suppose 1953 audiences were more credulous and able to swallow all this guff (though there would have been more theater tickets sold in the North).
Apart from the loaded and oversimplified stance, the writing is in fact not bad technically, from a Western point of view: the action and gunplay rattle along and there is even some attempt to develop character. It was by Russell S Hughes, who worked on The Last Frontier and Jubal. But it is marred by a pretty moronic voiceover narration which tells us that Texas was “a powder keg ready to explode” and other trite phrases of the kind.
Lex Barker is in it too, for no obvious reason. Perhaps they just needed a handsome cad. He plays a West Point officer who forces his attentions on Randy’s sad but loyal wife, and gets a black eye for his pains (in rather a good fistfight actually). This was pre-Winnetou (those movies were late 50s and early 60s) and Barker was no Western specialist. He’d had small parts in a couple of oaters and had starred the year before in a very B one, Battles of Chief Pontiac (if you call 18th century sword and tricorn dramas Westerns) but really wasn’t a leading figure of the genre, and he plays his rather one-dimensional part in a rather one-dimensional way. Of course he was big box-office then for the half dozen Tarzan movies he had just done.
.
. 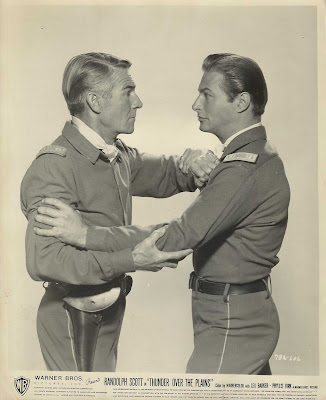 May I have this dance? No, actually they are squaring up for fisticuffs
.
In the cast we also have Henry Hull, strangely not overacting this time, not so you’d notice anyway, as Randy’s commanding officer Colonel Chandler, ready to hang a Reb, anything for the quiet life. And Fess Parker has a part as one of the bandidos. Phyllis Kirk is Mrs Randy. She later said she wouldn’t have done the movie had she not been under contract, though she did say some very nice things about Scott – all his fellow actors did. It was her second Western of only four.
Scott gives a rather subdued performance, a man knowing his sophisticated wife is unhappy in the West and a man who has to balance military duty with conscience. Randy was a much better actor than many people thought, even in lesser Westerns. 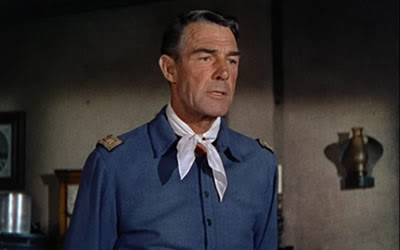 Very good performance
.
.
It’s in bright WarnerColor, with the Warner Ranch doing duty for dusty Texas. Shot by the excellent Bert Glennon, it’s attractive visually.
Westerns sometimes had misleading titles (you know, in A Thunder of Drums there is no thunder and there aren’t any drums) and it isn’t clear why this movie bears the name it does, for there’s no thunder and there aren’t any plains. Oh well.
You can see the hand of De Toth here and there. Some of the action scenes are very good, and if you watch this movie, look out for one scene where the informer makes his way through the darkened streets of the town, starting at every shadow (he knows he’s in for it).