Red River Range was the fourth of the eight Three Mesquiteers movies that John Wayne starred in for Republic in the year 1938 – 39. Little changed, probably to the satisfaction of the juvenile audiences: in under an hour the three pals of the saddle foil an evil plot headed up by a pencil-mustached villain in a suit. Cherubic George Sherman did the directing, Wayne’s pard Yak Canutt did the stunts, and of course Crash Corrigan as Tucson Smith and Max Terhune as Lullaby Joslin play the Mesquiteers who back up Wayne’s Stony Brooke (Terhune aided by his ventriloquist’s dummy Elmer). The same music is used.

As with all these movies, the setting is contemporary, with late-1930s costumes and transport, though the Mesquiteers seem to live in a time-warp, ridin’ the range and firing their six-shooters with abandon. The time they live in, though, is neither the 1930s nor the 1870s but instead it is the Tom Mix era of flashy cowboys and prancing white horses.

This one has a rustling plot. The twist is that the rustlers are using big trucks (which, thanks to speeded-up film, manage to hold the road at over 100 mph). There are two villains, though, this time: there’s a fellow named Payne (William Royle) who runs a dude ranch (this series liked dude ranches); he is immediately and obviously a bad guy because he wears a suit and has a pencil mustache. But it turns out that he is only the henchman of the true villain, Hartley (Perry Ivins), a rancher who wears a suit and has a pencil mustache. This evil rancher feigns outrage at the rustlin’ but he’s the one responsible, the two-timin’ chiseler. Still, he gets his just deserts, being hurled from the cab of the speeding truck with an “Aaahh!” Serves him right, the skunk.

Once again Stony pretends to be someone else, this time the escaped murderer, Killer Madigan. And this time it’s the other two pals’ turn to pretend to be dead (in Pals of the Saddle it was Stony). I must say, though, Killer Madigan has a great automobile.
The glamorous female this time is Lorna Gray as Jane. Ms Gray, who changed her name in 1945 to Adrian Booth, was a Columbia contract player loaned out to lesser studios now and then. She later joined Republic permanently and did quite a lot of Westerns; the biggest was probably Dakota in 1945, also with John Wayne.
Elmer has a conversation with a parrot.
.
. 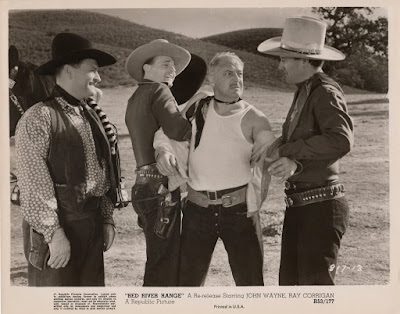 They put a bad guy in a refrigerated truck to make him talk
.
Though Stony has a rep for romancing the dames, he never actually gets one. In Red River Range, however, we are ‘amusingly’ led to believe he has fallen into matrimonial clutches in the last reel. But luckily someone else marries Jane and the three pals can ride off into the sunset to find their next adventure, which is pretty well de rigueur.
.
.
Actually, though, e-pards, I think you’ll be better off dropping the Range from the title and watching Wayne in Red River, nine years later.
.
.
Next in the series was The Night Riders.
.
PrevPreviousOverland Stage Raiders (Republic, 1938)
NextAllegheny Uprising aka The First Rebel (RKO, 1939)Next