The other day we were examining a two-reel Tom Mix silent movie, The Man from Texas. More typical of his output in the 1910s, though, were the immensely popular one-reel shorts that he churned out, usually taking Monday to Thursday making them and having Friday off (making mayhem with his pal Sid Jordan over the long weekend). Classic examples of the Western shorts are the two on the menu today.
They are interesting for the presence of Victoria Forde. Forde, the daughter of a Broadway actress, started in movies as a child star and was engaged by Nestor Studios at the age of 16 to make comedies. In 1915 she signed with ‘Colonel’ Selig and began doing Westerns. In Sage Brush Tom she was still only a minor player. By The Taming of Grouchy Bill the year after, she had the lead. She was vivacious, beautiful and talented, and Tom Mix, already on his third wife (Olive), fell for her. Soon she was his leading lady and in 1917 the two signed for Fox. They were married in 1918.
.
. 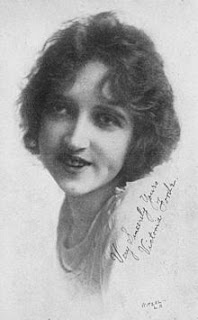 Victoria Forde, Mrs Tom Mix from 1918 to 1932
.
In July 1915 Tom had moved to the excellent town of Las Vegas – the proper one in New Mexico, not the vulgar gambling resort in Nevada – and made his movies there. Sage Brush Tom was one of many. Like the others, it was written, directed and produced by Tom: Colonel Selig left Mix a great deal of autonomy and rarely even visited the set.
.
. 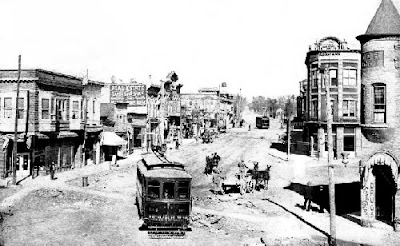 Las Vegas, NM in Tom’s day
.
It is a comedy: Tom buys a photograph of an actress (hardly a racy one – she is all muffled up in an overcoat) and falls in love. He takes his stub of a pencil and writes a clumsy fan letter to her, at her studio (Selig Polyscope) back East – film studios were still back East in those days. She and her sophisticated actor buddies laugh at this rube’s pathetic fan letter.
.
. 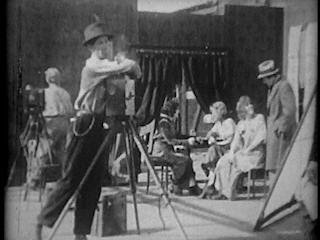 The film company back East
.
But then the studio sends the company West to make “quality Western pictures” and which ranch is chosen? Why, Tom’s, of course. Tom thinks she has come to see him. More scoffing. The studio’s leading man is intensely jealous and he and Tom get into a fight, in which Tom breaks the leading man’s jaw. So the director dragoons Tom into playing the lead role in the movie. Again, all the cast and crew laugh behind their hands at this country bumpkin. The (bandaged) leading man can still talk, though, and he gets his revenge by showing Tom an illustration of a burly gladiator in a loincloth wrestling a huge bull, which he says was a still from his part in Quo Vadis (1913), and says that Tom, like all actors, will be expected to do that. So Tom, nervous, ropes a steer and, in his longjohns and cut-down pants, attempts to practice, only to be told that the actress has returned East back to her husband and youngest son. Tom tears up the photo of her. Fin.
It’s light-hearted, inconsequential but mildly amusing. The 1915 audiences in the nickelodeons probably laughed heartily.
.
. 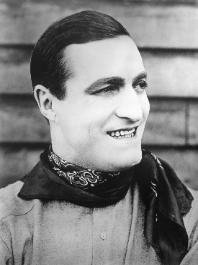 Tom Mix
.
I’m not quite sure who the actors are. IMDb says Goldie Colwell (also in The Man from Texas) was the leading lady but Richard D Jensen in his Mix biography says it was Myrtle Steadman, another Mix regular. It looks more like Goldie to me. The ‘leading man’ movie actor is uncredited. I did spot Sid Jordan, though, briefly, on the ranch.
The short is interesting also because we see the first signs of Mix’s costume getting flashier. There are silver conchas on the seams of his chaps, the bridle he uses has silver ornamentation, and he is using the fancy saddle he won in the 1913 Frontier Days rodeo in Prescott, AZ. Later, of course, Mix would exaggerate this exotic wardrobe and become duded-out in fancy frippery but here we see the start of that process.
By early 1916 Tom’s movies were selling so well that he moved to Hollywood and built an eighteen-room log cabin in Laurel Canyon. He made forty films that year, mostly short comedies along the lines of Sage Brush Tom – he only made one feature film in 1916, Twisted Trails, and Selig held that to three reels, not five. The comedy shorts turned a quick profit for the colonel and that’s what he wanted.
.
. 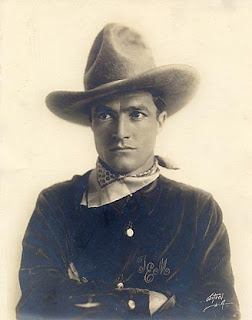 A young Tom
.
Grouchy Bill contains broader comedy than Sage Brush Tom did. The opening title card tells us that Married life is all beer and skittles… Mary had found that Bill was the “all beer” part, and she was “the skittles”. The eponymous Bill (Pat Chrisman, in many of these early Mix oaters) mistreats his young wife Mary (Victoria Forde, now the leading lady). Bill is a boor and a bully. The cowhands decide he needs to be taught a lesson (“roped and branded”) and Tom Merrill (Mix) and his pal Sid (Sid Jordan) hatch a plan to achieve this aim. Tom will dress up as Mary’s mother-in-law and, playing on the old ‘ferocious mother-in-law’ gag, will put Bill in his place. Tom tells Mary that “Matrimony and Manhattans are better for a good shake-up”.

So we have an ‘hilarious’ scene of Tom working out how a corset goes on and his pals putting an anvil in a bag so that Bill will have to carry it from the stage into the house. Bill suffers greatly from his wife’s extremely bossy (and muscular) mother and hatches a plot to get her on an unbroken bronc so she breaks her neck “and we’ll call it an accident”. It doesn’t work, of course, because ‘mother-in-law’ is only too used to bucking broncs. So Bill is broken, not the bronc, and they all lived happily ever after.

It’s a low farce, really, but that’s OK. It’s twenty minutes-odd of fun and of some little historical interest for Western buffs (for such, dear e-readers, are we).