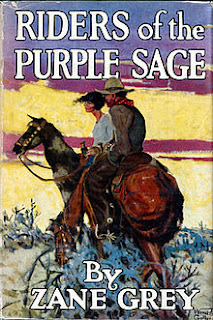 Zane Grey’s Riders of the Purple Sage is probably the most famous Western novel of them all. It has achieved a wider audience than even Wister’s The Virginian and for many people it stands as the Western story.
It was a huge hit when it came out in 1912 and movie versions were inevitable. Only six years after publication, Fox produced a big (five-reel) movie, starring William Farnum, Dustin’s brother, as Lassiter. I haven’t seen it (I’d like to; so many important films are still so difficult to find).
.
.
That was followed by the Tom Mix one (he was Lassiter, of course) in 1925, when Mix was at the height of his fame. I don’t know about the first one but the Mix version took very considerable liberties with the story, devoting much of its only 56 minutes to an invented backstory, all about how Millie was abducted in Texas. The picture was quite sober, for Tom, but it wasn’t a good treatment of the novel.
The 1931 talkie was much truer to the book, and I think in fact, considering all, it goes a fair way to doing to justice to the novel.
.
. 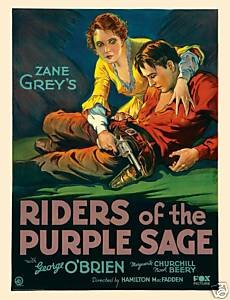 .
The story does make a good movie. Long novels have to be radically slimmed down for the screen but luckily Riders had pages and pages of soppy love and descriptions of nature that could be immediately discarded, and the novel’s action, which is genuinely good, would remain for the film.
You probably know the story. In fact, though, there are two parallel stories (though unlike parallel
lines, they occasionally intersect): everyone thinks of Riders as the tale of the mysterious gun-man in black, Lassiter, who comes into the life of beautiful cattle rancher Jane Withersteen, champions her cause and steals her heart. But in fact a greater part of the book is devoted to the other story – how Jane’s rider (or cowboy) Bern Venters shoots the famous ‘masked rider’, sidekick of rustler Oldring, and discovers he has shot a girl. He nurses her back to health in a hidden cañon, falls in love with her and they eventually live happily ever after.
The 1931 film, in common with other versions, plays down Venters and elevates Lassiter. The famous horse chase when Venters on Wrangle rides down jockey Jerry Carn leaping at full gallop between the blacks Night and Black Star as they hurtle across the sage is one of the genuinely thrilling parts of the book, but in the movie it’s Lassiter who does the gallopin’. And Bern Venters has, for some reason, become Vern Venters (James Todd, billed only fifth).
Today’s print (or at least the one I saw) is unfortunately very crackly and washed out, and it jumps a great deal, making you miss key moments of dialogue. It’s a pity. Still, you can see well enough to appreciate some of the cinematography (George Schneiderman, who was, with Ernest Palmer, the most prolific cinematographer at Fox in the 1920’s; he worked a lot on early John Ford Westerns). Yes, there are some obvious studio shots with cardboard rocks but there is also some nice location shooting filmed round Sedona and some unusual pans and moving-camera shots (movies were just breaking away from the very static camera). Director Hamilton MacFadden also handled the exterior action shots well, especially the horse chase, which includes a spectacular leap. MacFadden was signed as director by Fox in 1930 but in 1934 his contract not renewed after the merger with Zanuck’s 20th Century Productions, after which he appeared as an actor in small film roles until the mid-40’s. While at Fox he only directed two Westerns, this one and a Tom Mix oater. A pity: he seemed to have the knack. 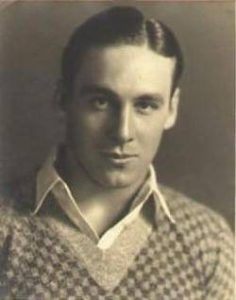 George O’Brien (left) is actually quite impressive as Lassiter. His entry especially is good (but then it’s a gift scene in the book). He talks more slowly than the other characters and this gives weight. Navy boxing champion in World War I, he was, as a virtual unknown, picked by John Ford to star in The Iron Horse in 1924. In ’26 he was one of Ford’s 3 Bad Men, in the silent version. He made the transition to sound, but not that well and his parts started to decline in stardom, and he became a Western specialist, at a time when many Westerns were pretty juvenile and low-budget affairs. He fell out with Ford but was later rehabilitated, appearing as an older man in Fort Apache and She Wore a Yellow Ribbon and even as late as Cheyenne Autumn. All in all, he does a fairly good job in Purple Sage.
His Jane is Marguerite Churchill. Ms Churchill had been strikingly good opposite a young John Wayne,  I thought, in Fox’s Raoul Walsh-directed epic The Big Trail the year before. She only did these two Westerns, though. Two years after Purple Sage she would become Mrs George O’Brien. As Jane she was not, I thought, as good as she was in The Big Trail, falling into overacting in a rather silent-movie style.
.
. 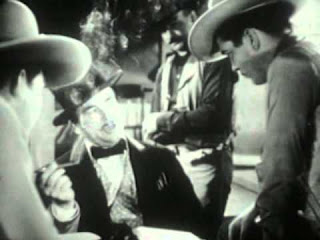 The bad guy Dyer is Noah Beery (Sr, obviously). In common with the other versions, he is Judge Dyer, not a bishop. The whole Mormon plot is again done away with. Grey was uncompromising in his anti-Mormonism. The Mormons are very clearly the bad guys. Under the hypocritical cover of their religion, they steal, spy, covet, lust, kidnap and kill. Sometimes all on the same day. The Elder Tull and the Bishop Dyer, in particular, are very nasty and, in the best Western tradition, deserve the come-uppance that they will inevitably get under the guns of the good guys.

Movie versions of the book were mealy-mouthed about this and excised the Mormon element of the story completely. The O’Brien one is no exception. Perhaps Fox didn’t want to offend potential audiences, or perhaps the studio bosses were more pro-Mormon, I don’t know. Maybe it was just 30s PCism. Anyway, Dyer is a judge and Elder Tull becomes just the judge’s henchman, Tull (Frank McGlynn Jr). Beery is excellent, as he always was. Though he never achieved the fame of his younger brother Wallace, he carved out a niche for himself as a Hollywood heavy, especially in Westerns – he appeared in fifty, from 1917 to 1945. Impressive. His bulk and growly voice were (once talkies came along) great assets, and he is a suitably villainous judge. He wants to take over the whole valley and drive the small ranchers out, you know how villains do.
.
.
.

Dyer’s demise is quite well handled. In the Tom Mix version the judge hides behind his desk and so we don’t see him shot, only the sinister tell-tale bullet holes in the wood. But the 1931 one had more gunplay as the judge pulls a pistol but Lassiter has a faster draw and a better aim.
Don’t get me wrong: this Purple Sage is no great film. It’s a one-hour programmer with no great pretensions. But it manages to telescope the main action of the book into the hour quite well, and there are sufficient qualities in the movie to warrant your having a look at it.
They had yet another go in 1941, with George Montgomery as Lassiter and there was a TV movie
with Ed Harris in 1996. I think it could be time for another.
PrevPreviousOnce Upon a Texas Train (CBS TV, 1988)
NextRaw Edge (Universal, 1956)Next