Hostages at the stage station

William F Claxton (left) was principally a director of TV Westerns; he helmed especially Yancy Derringer episodes and later worked a lot with Michael Landon, on Bonanza and Little House on the Prairie. But he did some big-screen oaters too, and in 1956 and ’57 he made two for Regal Pictures, released by Fox, which starred the excellent Forrest Tucker – a fine Western actor. They were low-budget black & white pictures really but they had some merit, especially the second one, The Quiet Gun. Claxton (billed on this one without the middle F) managed to bring some pace and tension into what is essentially a static story. It’s a ‘siege Western’ in which bandits take over a stage relay station and hold the passengers of the incoming coach, which they believe to be carrying gold, hostage.
.
.
Fury is the destination town but also, obviously, has a double meaning. In some ways the picture reminded me of Fox’s earlier Western, Rawhide, a superb, gripping (though largely forgotten) noir which has a similar plot. And when stage driver Paul Fix says to his friend the shotgun messenger Forrest Tucker that he wonders what happened to the people who ran the stage station and Tucker replies that maybe he wouldn’t want to know, it also reminded me of The Tall T, released earlier the same year, where the grisly fate is more graphically suggested.

Static siege stories like this one are cheap to stage, so are good for a low-budget picture, but can be hard to do well. They risk becoming slow and over-talky. But this one does have excitement as the passengers plot to outwit the bandits.

It’s a flashback-movie: each of the passengers has a story and we go back with them as they remember. There is a manipulative and duplicitous woman (Western vet Mari Blanchard) on the run with a small bag of cash, very like the banker Gatewood in Stagecoach. There is a judge (the even more experienced Wallace Ford) who is a serial coward, running from threats in town after town. And there is a two-gun quick-draw artist (Wright King, from The Gabby Hayes Show) who, it is revealed, has shot down a decent sheriff (Ian MacDonald) for no other reason than to make a name for himself as a gunfighter. All three are lowlifes but only the judge comes up trumps and finally finds some courage. 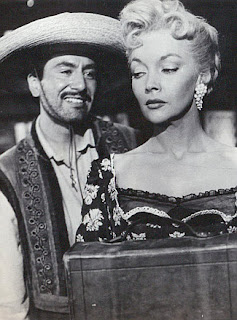 One of the bandits (Rico Alaniz) has designs on Mari

The robbers are led by Rodolfo Hoyos Jr in his first big-screen Western – he did mostly TV shows, though he would be Villa! in 1958. He is satisfactory as the gentleman bandit with a heart of stone. Of course he will be thwarted by brave Forrest Tucker, as we all know. He must have guessed, surely? 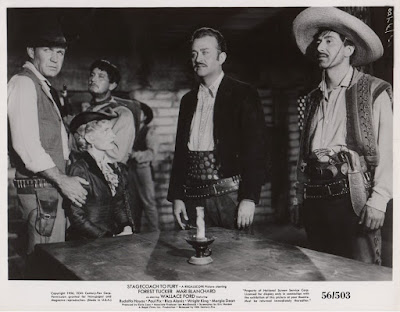 Eric Norden wrote both pictures. This one has fewer improbable plot twists than The Quiet Gun and the occasional classy line. Paul Dunlap did the music for both, and it’s pleasant enough. It is said to have been shot in Montana, though looks more like Utah to me. 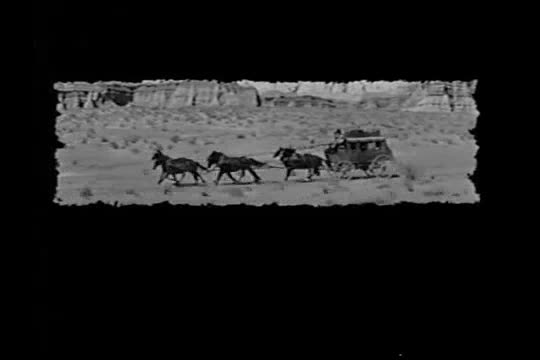 The cinematographer was Walter Strenge (soon to be President of the American Society of Cinematographers) and rather surprisingly, considering how few exterior shots there are, this picture, Strenge’s first Western, was nominated for ‘best black and white photography’, this being one of the last movies to be considered in that category because the Academy dropped it shortly thereafter. It was in CinemaScope, so maybe it was that. 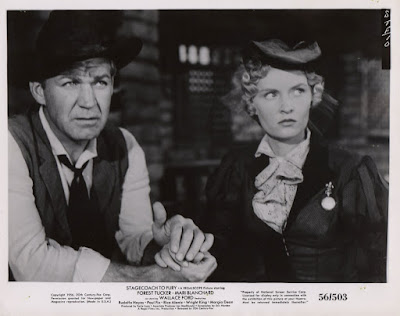 There’s quite a good final shoot-out and a Tucker/Hoyos showdown horseback duel with rifles.

Definitely watchable. It doesn’t, perhaps, have quite the quality of The Quiet Gun but it certainly has merit. 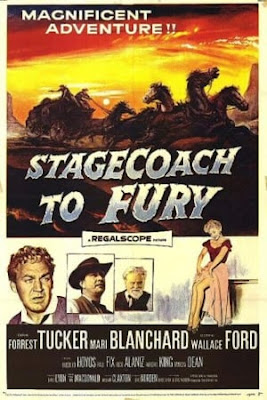