.
No more Mr Nice Guy
.
.
A revenge/whodunnit drama with a punning title, one of Columbia’s Western offerings for 1954 starred Dana Andrews in his seventh oater. Andrews wasn’t a real Western specialist; he topped the bill in four in the 1950s and a couple of those AC Lyles retro pictures in the 60s. Altogether he only appeared in thirteen features in his career (not a huge number for those days) and he did no Western TV shows. But he was good in the saddle and a couple of his oaters were classy films in which he was very memorable – I’m thinking in particular of the William Wellman-directed The Ox-Bow Incident and the Jacques Tourneur-directed Canyon Passage based on an Ernest Haycox story.
.
. 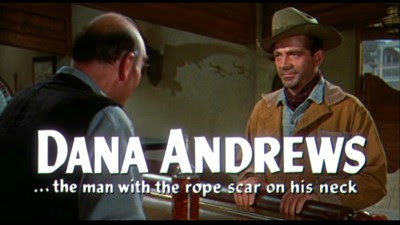 Normally Andrews played Mr Nice Guy but in this one he is Jim Guthrie, a tough hombre bent on revenge for having been unjustly accused of homicide and very nearly lynched. He wants justice: punishment for the lynch mob and death for the real killer.

You can tell he’s tough because when we meet him in the first reel he is unshaven and he doesn’t return the greetings of the townsmen. It’s one of those Westerns that start with bystanders looking fearful and nudging each other when the tough guy rides into town.

We get a flashback scene to the night of the murder. While we never condone lynching (nasty, sordid crime) we kinda get why the townsfolk thought he did it. The corpse has two derringer bullets in it and Guthrie is found standing over the body holding an empty derringer. But of course as so often in Westerns, they all jump to conclusions in a way that any passing Olympic pole-vaulter would envy; they don’t bother with any such formality as a trial. “String him up!” is immediately the cry. 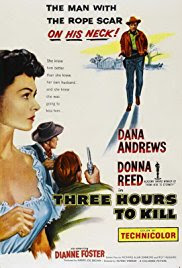 No great A-Western but still a must-see

The four leaders of the lynch mob are understandably nervous when Guthrie comes back to town. They are barman James Westerfield, barber Whit Bissell, banker Richard Coogan and saloon owner Laurence Hugo. I’m a bit of a James Westerfield fan on the quiet, and not just because of his Hanging Judge Isaac Parker in True Grit but also because of his countless Western appearances, on big screen and small (mostly small, it must be said). And this was his very first feature Western. Whit Bissell would turn Michael Landon into a werewolf in 1957 but he too appeared, always memorably, in very many feature and TV Westerns, from The Sea of Grass in 1947 to a TV movie in 1978. The other two were not habitués of the big-screen Western. Coogan, Captain Video at the end of the 1940s and star of The Californians from 1957 to ’59, also made appearances in many other Western TV shows but curiously Three Hours to Kill was not only his first big-screen oater, it was his only one. Laurence Hugo was in his only Western, big screen or small. 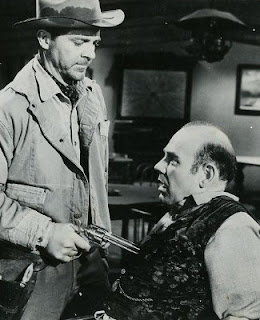 The banker, Niles, is especially put out because while Guthrie was away he has married Guthrie’s girlfriend, Donna Reed (probably still polishing the best supporting Oscar she had been awarded the year before). In fact it’s quite daring for 1954 because when Carter (Richard Webb), the soon-to-become-corpse brother of Donna, tells Guthrie that no way is he going to marry her, Guthrie replies that he “should have married her already” – heavy hint. Later, we are given to understand that Donna’s young son isn’t the offspring of her husband, banker Niles, but is actually Guthrie’s. So clearly there was some rather osé pre-marital hanky-panky going on before Guthrie nearly got hanged. 1950s matrons probably swooned in their theater seats. 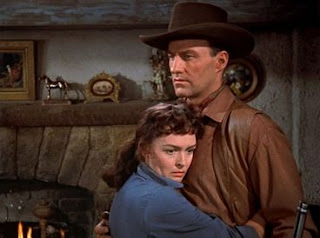 It’s shot in bright Technicolor by Charles Lawton Jr, so quite classy, though location shooting is infrequent and most is set on the Columbia town lot and with studio interiors. I even wonder if it was done in 3D because the titles certainly look like that. But the 3D craze was pretty well over by then, and there are no lunges directly into the camera or other stunts that we associate with 3D.

The sheriff (Stephen Elliott, Captain Video’s nemesis, only this and one other Western) gives Guthrie till sundown to find the killer. “Then I’ll come looking for you.” Plausibility isn’t this plot’s strongest point. The sheriff is the only non-suspect, though, because he wasn’t at the lynching…

There’s a racier gal, naturally, as counterpoint to the rather posh Donna. She’s glam redhead Chris (Diane Foster) who has a thing for Guthrie, even if he lost his heart to Donna. She gets him in the end, though, when Donna does the decent thing and sticks by banker hubby, leaving Guthrie, crime solved and villain dead (I shall not reveal who the guilty party was) to ride off into the sunset. Diane would pop up again in The Violent Men and Night Passage,  among other pictures. 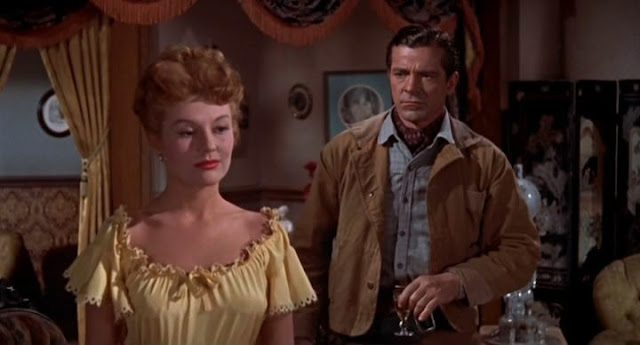 The director was Alfred L Werker, an experienced hand and a go-to ‘film doctor’ who could turn round problem sets, replace fired/sick/drunk directors and so on. He co-directed the 1928 silent Kit Carson and some Fred Thomson oaters, helmed quite a few George O’Brien talkies, and the year after Three Hours he would direct the Fred MacMurray picture At Gunpoint. Phil Hardy, in his encyclopedia of Westerns, even says he was one of the most interesting directors of early-fifties Westerns. I’m not sure about that but he certainly did a competent job on Three Hours. 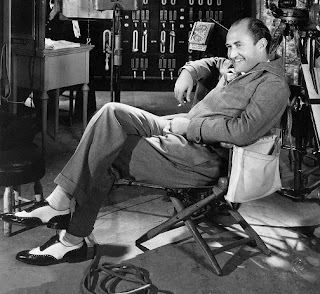 A color Dana Andrews Western with a derringer playing a key part: it’s a must-see, e-pards.