Pernell Roberts (left) had a promising Western career and one thinks principally of his excellent performance as semi-sympathetic bad guy Sam Boone in the Budd Boetticher/Randolph Scott picture Ride Lonesome in 1959. He had been Chocktaw Neal in The Sheepman the year before that but mostly he did Western TV shows of one kind or another. He became Adam Cartwright on the Ponderosa in 1959 and certainly typecast. Frustrated and unhappy at the lack of development of his character, he quit the show after 202 episodes at the end of the 1964–65 season but if he was hoping to spread his Western wings and land starring roles, he would be disappointed. A handful of TV movies and appearances on other Western TV shows led only to Four Rode Out, a spaghetti western in 1970 – or rather a paella western – which was really very weak.

Four Rode Out, 4 for Texas, Four Faces West, Four Fast Guns, Four Guns to the Border, Four of the Apocalypse, it was a popular digit. Of course it had the advantage of being a low-budget
number of actors. This picture was, the title screen announces, “A Payser/Landau Ada Films/Tibor Reves American-Spanish co-production” shot in Almeria in 1969. It was directed by John Peyser, a director of TV oaters (including an episode of Bonanza) who, however, had no experience of big-screen Westerns. Four Rode Out was not a lavish affair. 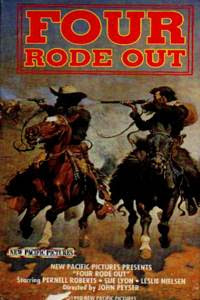 Pernell’s co-star was Leslie Nielsen, who did in fact do a fair number of Westerns. He too was in The Sheepman, he too was a regular on TV Western shows (including Bonanza) and he was entertaining as the baddy in the (otherwise pretty bad) Gunfight in Abilene in 1969. In this one he plays a Pinkerton man on the track of a bank robber, or so we are led to believe in the first reel. Pinkertons in Westerns were often bad guys. If you wanted a goody detective you usually called him a Wells Fargo agent. 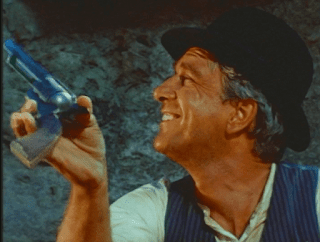 Nielsen is a Pinkerton. Or is he?

Roberts and Nielsen were competent actors. However, the other two in the equestrian quartet of the title weren’t so good, and in the case of the leading lady, Sue Lyon, forever memorable as Lolita eight years before, very weak. 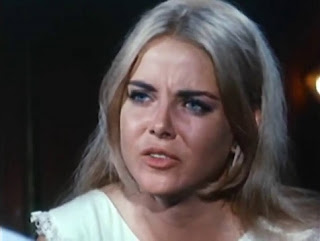 Briefly, lover boy Fernando (Julián Mateos, who had parts in other Iberian Westerns such as Catlow and Shalako) visits a tossing-and-turning blonde Myra (Lyon) in her bedroom to the tune of inappropriate late-60s guitar/song by Janis Ian. But fat and abusive daddy (Charles Drace, no idea who he is) discovers them, Fernando flees and Myra’s pop is so distraught he shoots himself – plausibility isn’t this film’s strong suit. 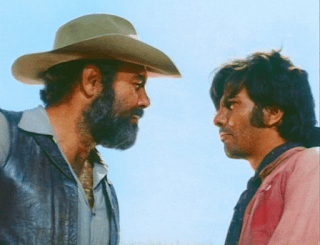 Now we meet bearded US Marshal Ross (Roberts) who is after Fernando for bank robbery, and he seems a decent sort of fellow, unlike another detective also on Fernando’s trail, the evil Pinkerton Mr Brown (Nielsen). They set off together in reluctant partnership in pursuit of the villain and are soon joined, inevitably, by Myra, you know how girls do.

The dialogue on the Westernmania channel of Amazon Prime version is clumsily censored, with the word whore replaced by silences, presumably for the tender sensibilities of TV audiences. The color print is also of bad quality. 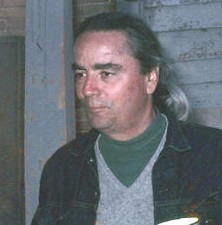 The evil Pinkerton proposes a deal with Myra: he won’t kill Fernando if she has sex with him. We don’t quite see if she goes along with it (probably censored again). Later she will claim it was rape. At any rate the evil Pinkerton is so evil that when they finally come up on Fernando, he breaks his word and shoots Fernando anyway. And, as if further proof were needed of his evil, he does it (at long range) with a derringer. It’s one of those Yancy-type Sharps derringers.

Well, Marshal Ross digs the bullet out and Fernando survives. He claims that Mr Brown isn’t a Pink at all but really is Kruger, accomplice in the bank job and the one who killed the bank guard. So, whom to believe? We all go for the Kruger theory. 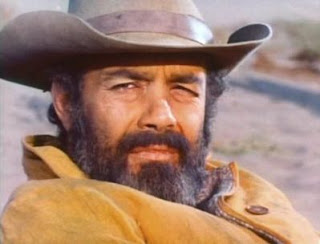 The four ride out for Almeria, on three horses. But Brown/Kruger stupidly punctures the water bag while attacking the marshal with a knife, doh, and the horses die off one by one. So the four rode out, OK, but then they walked out, then staggered.

The girl goes crazy (badly acted) but is married to Fernando anyway by Marshal Ross in a bizarre ceremony in the desert. The guitar sound track becomes bluesy for some odd reason. They stagger endlessly on. The movie is 97 minutes long, though mercifully only 90 minutes in the Spanish version, which I’d go for. Three quarters of the quartet die off one by one (my lips are sealed as to which, and in which order) and there’s a badge-in-the-dust cliché at the end.

A really big yawn. And unworthy of either Roberts of Nielsen.