Mustang Country was Joel McCrea’s last Western. In fact it was his last film. He had been a towering presence in our noble genre since those big pictures for Paramount and Fox in the 1930s and 40s. McCrea had in fact thought that the excellent The Gunfight at Dodge City in 1959, a Walter Mirisch production which was shot in California contemporaneously with Omanche Station, starring McCrea’s pal Randolph Scott, shot up at Lone Pine, would be his last. McCrea and Scott then promptly retired from the big screen – though McCrea worked with Mirisch again on the unsuccessful TV show Wichita Town. But as we know, in 1962 Sam Peckinpah managed to entice both McCrea and Scott out of retirement with the perfectly splendid Ride the High Country. Neither McCrea nor Scott had ever been better.
.
. 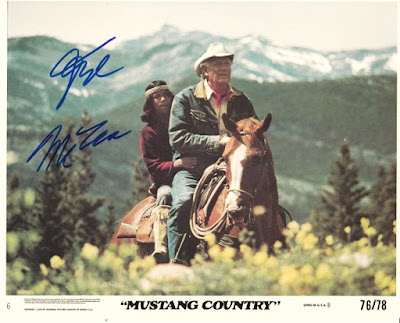 While Randy really did hang up his irons then, Joel didn’t. He supported his son Jody in Cry Blood, Apache (1970), bracketing the main action by playing the elderly hero (i.e. Jody as an old man) reminiscing at the start and end of the movie. The movie was neither a critical nor a commercial success. But in 1976, when he was 71, he accepted another project, Mustang Country. It was a pity, really. It probably would have been better to end, like Scott, on a high.

Most of the scripts McCrea had been sent since Ride the High Country were, he thought, unsuitable. He wasn’t ready to play a bad guy, and he didn’t like most new Westerns. “The things that had been submitted to me,” he said, “were not very interesting or exciting, and most of them were on the degrading level, which I didn’t ever want to do because I had kind of established an image, such as it was. I saw no reason to become an anti-hero.” 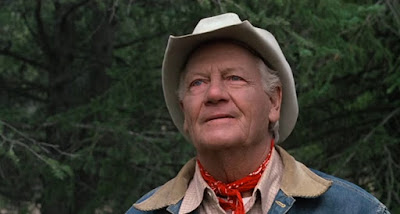 Older, but the same old Joel

But McCrea liked Canadian John Champion’s project (Champion produced, wrote and directed Mustang Country). Universal would back it and it would be shot in Technicolor up in the beautiful Banff National Park in Alberta. He said yes.

It tells the 1920s story of aging ex-rodeo star Dan (he is proud of a watch presented to him in Calgary by William F Cody) who is determined to capture a fine black stallion, called Shoshone, which has so far evaded all round-ups, along the Montana/Canada border. I Always root for the stallion in these cases but there we are. The poor beast always gets captured in the end. Of course it wasn’t the first time for Jody. He’d done it in Black Horse Canyon back in ’54.

Patrick Wayne and Robert Fuller have small parts early on, little more than cameos really, as two cowpokes who try unsuccessfully to rope the mustang. 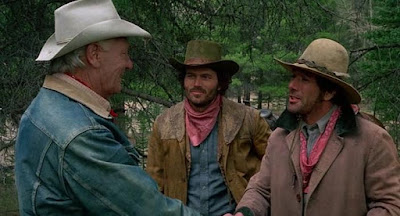 Most of the film is a two-hander, though, with young Nika Mina playing a Native American boy who has run away from Indian school and who comes across an unconscious Dan after he has fallen from his horse. The boy’s grandfather has just died and he wants the bounty on Shoshone to help his grandma out. Dan needs cash too, and they agree to try to capture the horse and go fifty-fifty on the reward. But Shoshone is not easy to catch… 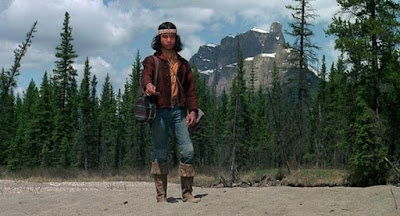 The cast is therefore small, the story simple and the picture is, frankly, unremarkable. The catching-a-wild-horse plot has been done often before. The film is very pretty, and there are echoes of Disney and National Geographic with a multitude of critters making appearances. The cinematographer was J Barry Herron, who had in fact done some National Geographic documentaries, including one on America’s national parks.

The dialogue is rather heavy-handed and obvious, and McCrea delivers much of it surprisingly woodenly. He said that while he was fine with the horseback part (he was still riding every day on his ranch) he did have problems learning his lines. “I wasn’t as quick a study as I had been. I had to think about it.” McCrea claimed the movie was a pleasure to make, and his time in Banff something of a vacation. 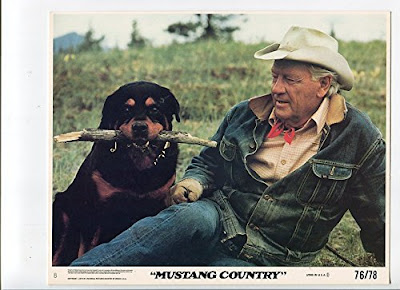 He has an excellent dog, Luke, who will perish gallantly in combat with a grizzly

The tone and theme of the film is ‘family’. It’s wholesome and, I think, rather saccharine. The reviews were more or less unanimous that the picture was bland entertainment. It works, though, because it was McCrea.