Regular readers of this blog, both of them, will know that I am not a fan of the spaghetti western. It’s odd in a way because I lived in Italy for twelve years. I love Italy and love the Western. But I do not like 60s Italian Westerns – or westerns as I call them, for they are, to me, not proper Westerns but more films about the Western. My chief grudges against them are the atrocious dubbing, the juvenile dialogue, the jangly music, the unconvincing costumes, the wrong terrain and the poor acting. Otherwise they are OK I guess.

This one, which has the onscreen title 32 CALIBER KILLER, is quite typical. It was directed by Alfonso Brescia, billed as Al Bradley (cast and crew often took American-sounding names) who had come, as many spaghetti-western people did, from the cheap rip-off sword-and-sandal movies that were popular before the westerns started, in the mid-60s. He directed seven westerns, two of them with Peter Lee Lawrence. 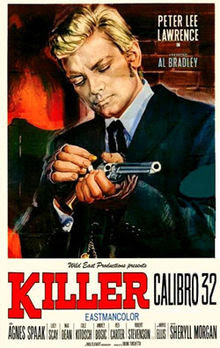 Quite a classic spag poster

Lawrence (Karl Hyrenbach) was a German who died aged only 30 of a brain disease. He was blond and handsome but honestly, not much of an actor, at least to judge by this dubbed spaghetti (it’s often hard to tell). He had started with a small part in For a Few Dollars More.  He plays a hired killer named Silver – Mister Silver, as he usually insists – who favors a .32. He is one of those supermen who is a trick shot and invincible with his fists and very clever at sussing out who the villains are, and altogether indestructible, so there is no suspense whatsoever. 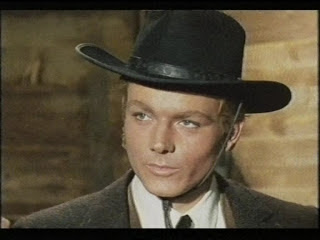 Second-billed was Agnès Spaak, from Paris, as the saloon woman Betty, who is, I think,  supposed to be enigmatic but is actually just rather dull.

There’s the ‘other woman’, Janet (Lucy Skay, don’t know anything about her). And there’s a youth, even more youthful than the hero, Spot (Alberto Dell’Acqua, in the fourth of his 23 spaghetti westerns) and he attaches himself to the hero as a kind of apprentice.

It starts with a stagecoach being held up. One passenger stupidly pulls down the mask of the leader of the bandits and recognizes him, so all the passengers are shot to death. Silver (sorry, Mister Silver) is hired by the bank boss Averell (Andrey Bosic, from Yugoslavia, as it was called then) to find the robbers and kill them all. Averell discards the possibility of using the “John Pinkerton Agency” (sic), preferring to hire a murderer instead. 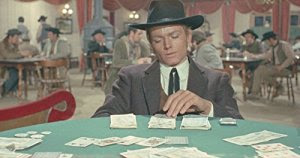 One by one the robbers are killed off but who is the Mr Big? Well, it’s blindingly obvious that it’s either Averell himself or gambler Ramirez (Gregory West), or the sheriff (Mirko Ellis, born Mirko Korcinsky, a Swiss). It duly turns out to be one of them. As if we care.

One good thing: it’s a two-derringer picture. Both Ramirez and the saloon dame have one.

The costumes are lousy. The lawmen wear stars that look as though they came off the Christmas tree. 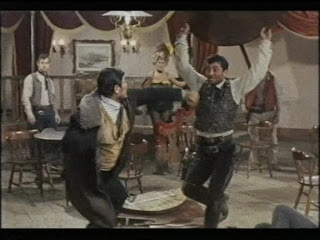 Admirers of spaghettis will enjoy the opening titles. They are quite classic, with cartoon-like figures and shouted ho-ha ‘music’.

It’s quite Italian because Betty is handed a note reading DEVO PARLARTI (I have to speak to you), and the final song is in Italian. The sets are cheap and clumsy. What is supposed to be a Southern Pacific railroad site is labeled SOUTH PACIFIC. They got the wrong movie there.

It’s junk. But spag fans may like it. I thought I better watch it. I force myself to sit through a spaghetti every now and then, partly out of masochism (it’s lovely when it stops) and partly vaguely wondering if I might one day find one that was half good. Not this one, that’s for sure.