How the West was Fun

Partly perhaps because Hollywood motion pictures tended to be made by showbiz people who had a natural affinity to the theme, and partly because the whole genre was rooted in ‘wild west’ spectacles by Buffalo Bill and his fellow showmen, there has always been a strong strand of Western movies that dealt with actors, traveling shows and the like, and it’s still going on (see, for example, the Coen brothers’The Ballad of Buster Scruggs).

One of the best examples of this little sub-genre was the George Cukor-directed Heller in Pink Tights, released by Paramount in March 1960, a movie which did not excel at the box-office (it was the year of Psycho and Spartacus, and Western honors went to The Alamo, and even the Elvis vehicle Flaming Star did better) but which was nevertheless well received by the critics. Bosley Crowther in The New York Times wrote, “What is charming about this picture is its cheerful, nostalgic air—its superb illustration of old playhouses with their red plush décor and straight-backed chairs, its feeling for the sleaziness of trouping, its affection for the actor’s attitude.” Variety said that Cukor “puts tongue in cheek to turn an ordinary story into a gaudy, old-fashioned western satire with gleeful touches of melodrama.”

The picture had various advantages. For one thing, it was written by Dudley Nichols from the 1955 Louis L’Amour story Heller With a Gun, so there were a couple of pretty expert typewriters at work there. Nichols wrote Westerns of the quality of Stagecoach for John Ford, The Westerner for William Wyler, The Tin Star for Anthony Mann and The Big Sky for Howard Hawks. L’Amour said Heller, along with Hondo, were his favorites. Originally there was a project with L’Amour and Michael Rennie, who set up a production company together, to do a film version in 1957 but that came to nothing. Then L’Amour was slated to co-write the script for Paramount’s Cukor picture but he wanted more money than the studio was willing to pay, so Nichols, as well as Walter Bernstein (the same year uncredited writer on The Magnificent Seven) were put to work on the screenplay.

For another, the cast was headed by Sophia Loren (Marlene Dietrich, then Anne Baxter were first mooted) and Anthony Quinn. Loren was at the pinnacle of her beauty at that time and was also an accomplished actress. Quinn (soon to be the subject of one of our The Westerns of… series) was always superb in Westerns and his boisterous larger-than-life persona admirably suited ‘showbiz’ pictures. It is true that this was Cukor’s only Western but he specialized in rom-coms and showbiz tales such as Les Girls and A Star is Born, and Heller fitted well into his œuvre. The movie is in fact a delight.

Some of the other casting is interesting. Steve Forrest, Dana Andrews’s brother, probably best known for his role in ABC’s police drama SWAT but also, the same year as Heller, Elvis’s brother Clint in Flaming Star, is the amiable – nay, amorous – gunslinger who gets involved with the troupe (and especially Loren). According to a Hedda Hopper column of the era, Cukor and Loren wanted Clint Walker for the role but he wasn’t available. Forrest does the job well, though.

Ramon Novarro, the silent Ben Hur, in his last picture, is entertaining as the gunman’s wicked employer – the crooked banker beloved as villain by Westerns. Crowther said, “Eileen Heckart as a red-wigged ‘second lady’ clucking wildly over her daughter is droll, and Margaret O’Brien is nimble and surprisingly pretty and comical as this guarded ingénue.” Actually, O’Brien is excellent. Edmund Lowe, also in his last film, is amusing too as a hypochondriac ham. Chief Yowlachie, Iron Eyes Cody and Eddie Little Sky are among the Indians.

The story is quite daring, for 1959, when it was shot, as Loren, who first appears pulling back some small sliding doors and putting her head out, doors which reveal themselves to be painted on the other side with an image of a naked woman, so that Loren emerges right from the lady’s vulva, then loses at cards to the gunfighter and, without money, must pay ‘in kind’, as it were, though of course the settling of the debt is discreetly done off-camera. This pains and estranges her fiancé, Quinn, the troupe’s boss, and the plot hinges on the reconquest of the love between them.

Cukor himself admitted that the story was slight but it was the atmopshere and characterization that made it. He was right there.

It was loosely based on the acting career of Adah Isaacs Menken, who played the frontier circuit in the 1860s. She performed in Mazeppa, the hugely popular ‘hippodrama’ written by Henry Milner from Lord Byron’s poem and described by Wikipedia as “a blood-thirsty tale of crazy love, abduction, political persecution, and vengeful murder.” Sounds fun. The scenes of this in the movie are among the best – and the most farcical, when the gunman escapes disguised as the heroine on the horse.

Cukor clearly enjoyed the sequence in which the attacking Indians adorn themselves in ladies’ clothes and cavort about. According to Gavin Lambert, in his book On Cukor, this scene was taken from an unproduced treatment by DW Griffith of the autobiography of traveling actor Joseph Jefferson, who wrote about just such an occurrence. I do wonder in fact if Cormac McCarthy had seen this movie when he wrote a similar scene, though in his case more from a horror movie than a comedy Western, in Blood Meridian. 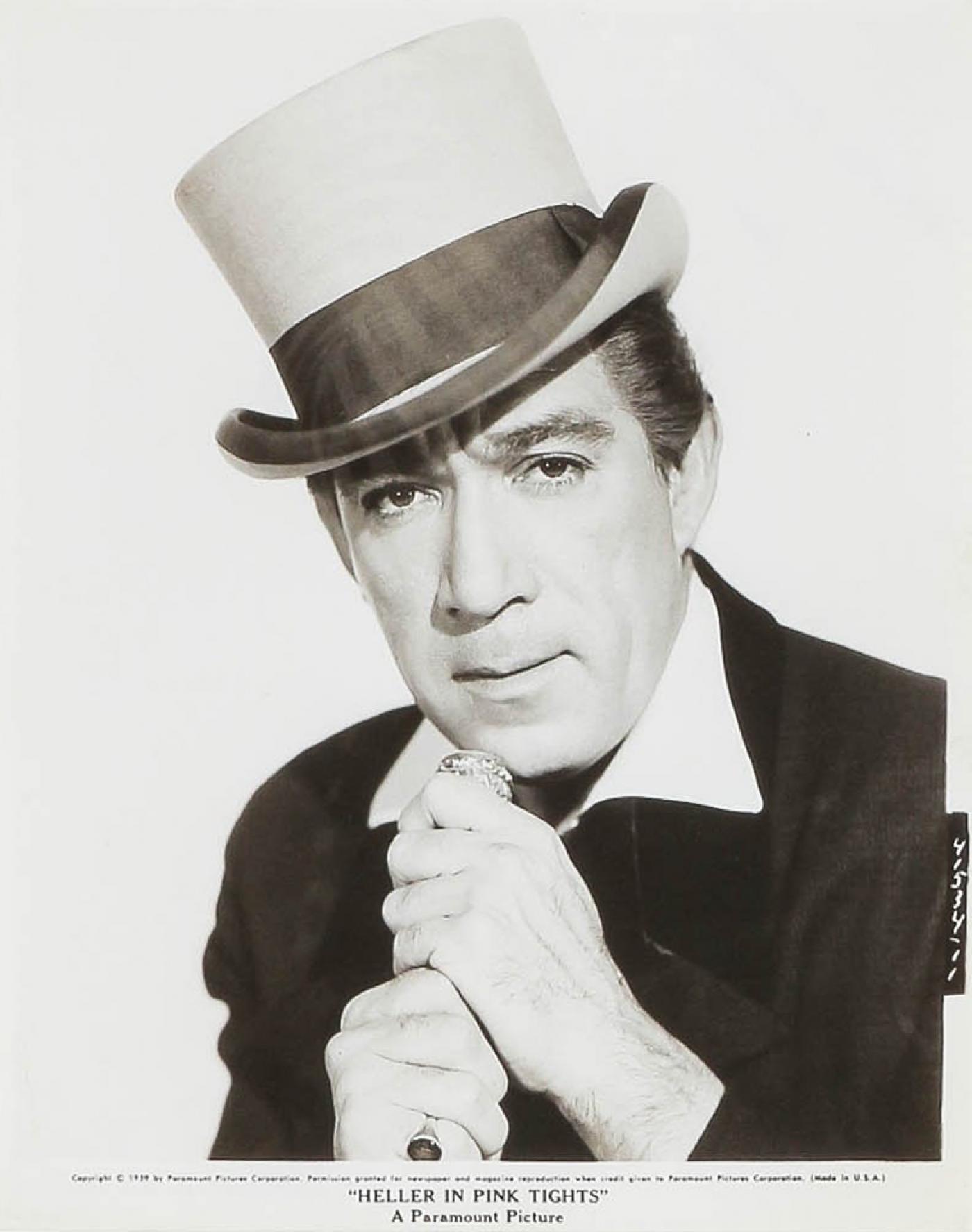 Cukor’s biographer Patrick McGilligan put it nicely when he wrote that the picture was “a handshake between Toulouse-Lautrec and Frederic Remington”. Tom Milne in The BFI Companion to the Western wrote, “Hoyningen-Huene’s colour effects are marvelous and so are the performances.” Yes. Loren was Oscarable in my view and Quinn held his sometime extravagance in check so his performance was all the more powerful. George Hoyningen-Huene, by the way, you probably know, was one of the great fashion photographers of his age; he was the color coordinator on this picture. And DP Harold Lipstein’s Technicolor cinematography, on the Paramount Western town lot and in Old Tucson locations, is very good.

Heller in Pink Tights is actually a little gem.